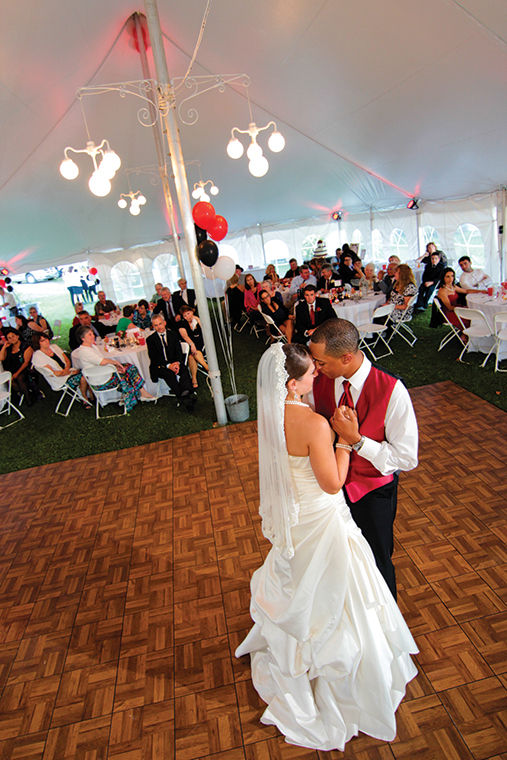 The key is to listen to your partner, and not just with your ears. 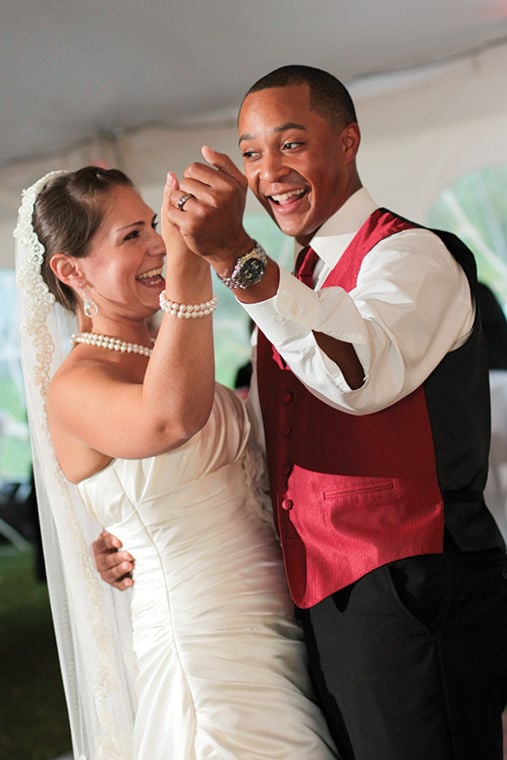 Having a few dance steps in your repertoire can make all the difference.

The key is to listen to your partner, and not just with your ears.

Having a few dance steps in your repertoire can make all the difference.

It’s there on the calendar — your big day, that moment when you and your beloved stand up in front of your friends and family and say “I do.”

It’s also the day when all of those eyes will be on you as you take your new bride and lead her onto the dance floor. The music starts, and … oh my gosh, you’re sweating right now just thinking about it. The dreaded first dance.

For the left-footed among us, the ones who’ve been standing with the guys in the wings since prom night, there’s nothing more terrifying than getting out on the dance floor, and even worse: being in the spotlight.

“It was definitely on my mind for a few months,” Matt said, laughing about the memory from his wedding to Reeni last summer.

You might be able to find some moves on YouTube that you can practice in the privacy of your own living room. Or you could get a sackful of quarters and hone your skills at an arcade game like “Dance Dance Revolution.”

Or you could just sign up for a few dance classes. Luckily, in northern Vermont, there are plenty of places that will teach you some basics.

One move’s probably not enough, while a four-year degree from Juilliard is surely unnecessary. But having a few dance steps in your repertoire can make all the difference. It’s not “Dancing with the Stars,” after all; it’s dancing with your family and friends.

Alexis George-Owens runs the Lamoille Valley Dance Academy, a little studio tucked off Stagecoach Road that connects Stowe and Morristown. She has taught entire wedding parties elaborate swing dance routines for the big day, and worked with couples in just getting some basics down pat.

For folks who are uneasy on the dance floor, it’s best to stick to a few moves. When couples try to come up with something choreographed and cool, she said, they run the risk of appearing stiff, awkward, and overly rehearsed. The key, she said, is to listen to your partner, and not just with your ears.

“When you look like two dolls that are connected by strings, it doesn’t look romantic,” she said. “The first dance is something that should look lovely and sweet and romantic, not like something on a stage.”

Matt and Reeni signed up for a few swing dance classes (he’s an Eagle Scout, and always prepared). He found them a little awkward, and who wouldn’t? If you’re not the type to get out on the club floor and point to the sky to “Stayin’ Alive,” why would you willingly shell out money to have someone watch you try to Lindy Hop?

“As weird as it made me feel, it helped,” Matt said.

The couple’s first dance as husband and wife was to “I Will” by the Beatles, a sweet, lilting, flowing ditty that lends itself to long strides and flourishes across the dance floor. Also, and this is key, the song clocks in at just under two minutes.

The dancing portion of the wedding went so well, Matt thinks he might not feel so nervous next time dancing’s on the agenda.

“I might be a little more susceptible to getting out there,” he said.

Just as having a couple of moves down pat will help your confidence, having a couple of drinks in you might help, too. Plenty of guys will tell you a beer or two will improve their pool shot, their golf stroke, and their bowling game.

“It definitely made a difference for me,” Matt said. “The first dance is definitely the one you want to get down. After that, you go out and have a few beers and you’re just hanging out with your friends. In some ways, it’s really just a big party.”

George-Owen throws some cold water on the liquid courage theory, though. She’s been to a lot of weddings, and she’s seen people get too drunk. Remember, grooms: alcohol affects your wedding-night performance in places other than just the dance floor.

“I’ve never thought it was wise to get stupid drunk at your wedding,” George-Owen said. “You’re a little less aware and less sharp. You lose some of your mental acuity, and you lose your coordination.”

If you want to really impress people, she said, the best way might just be the simplest move in the book: the dip. Learn that one, and everyone will melt.

“It’s debonair, and it really does cap off a beautiful romantic dance,” George-Owen said. “Just a slight bend at her knee with one leg extended, and people just go, ‘ahhhhh.’”