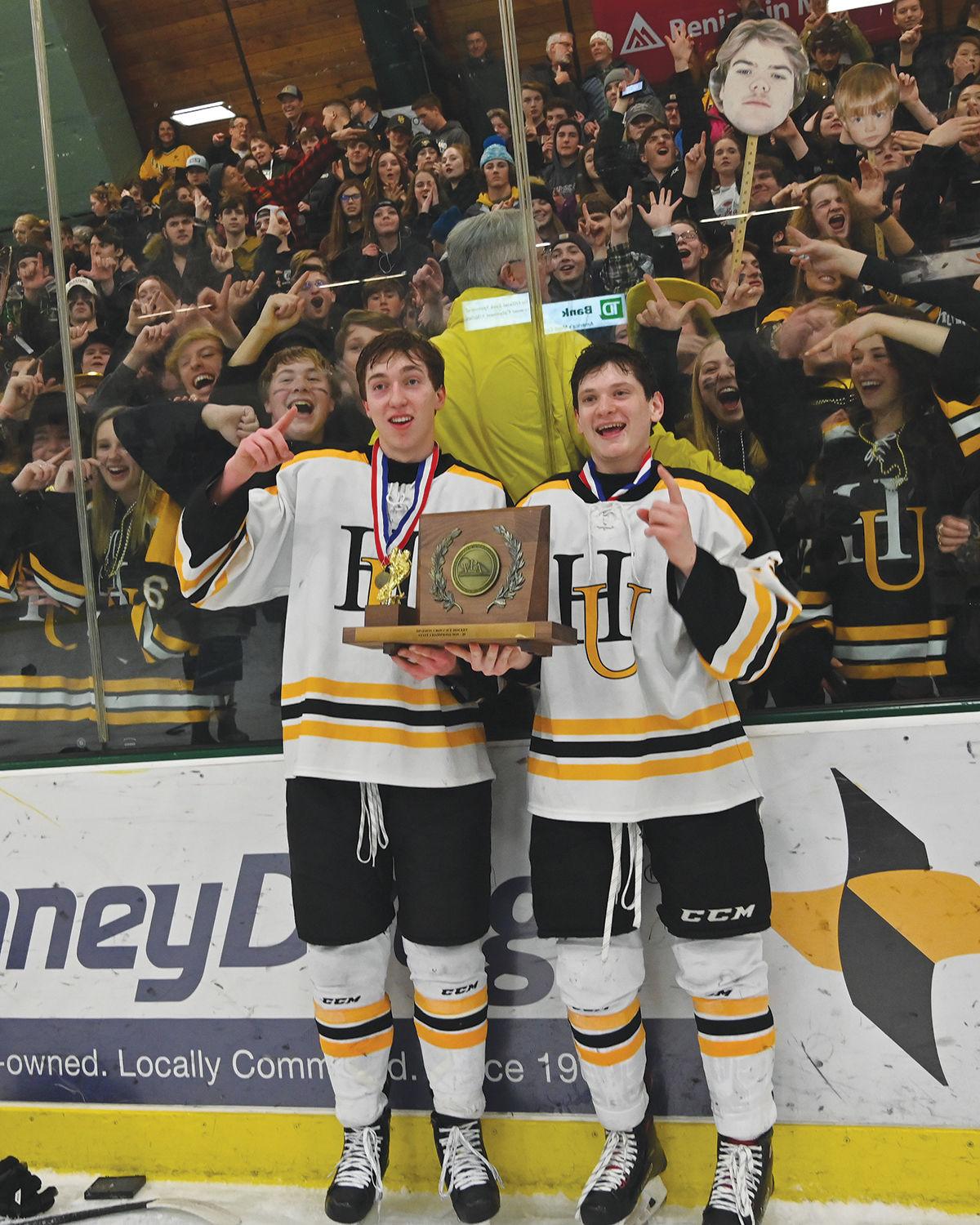 When Finn O’Hara (left) and Skylar Platt were little kids, barely able to lace their own skates, they dreamed of winning a state hockey championship for Harwood. Now, they have. 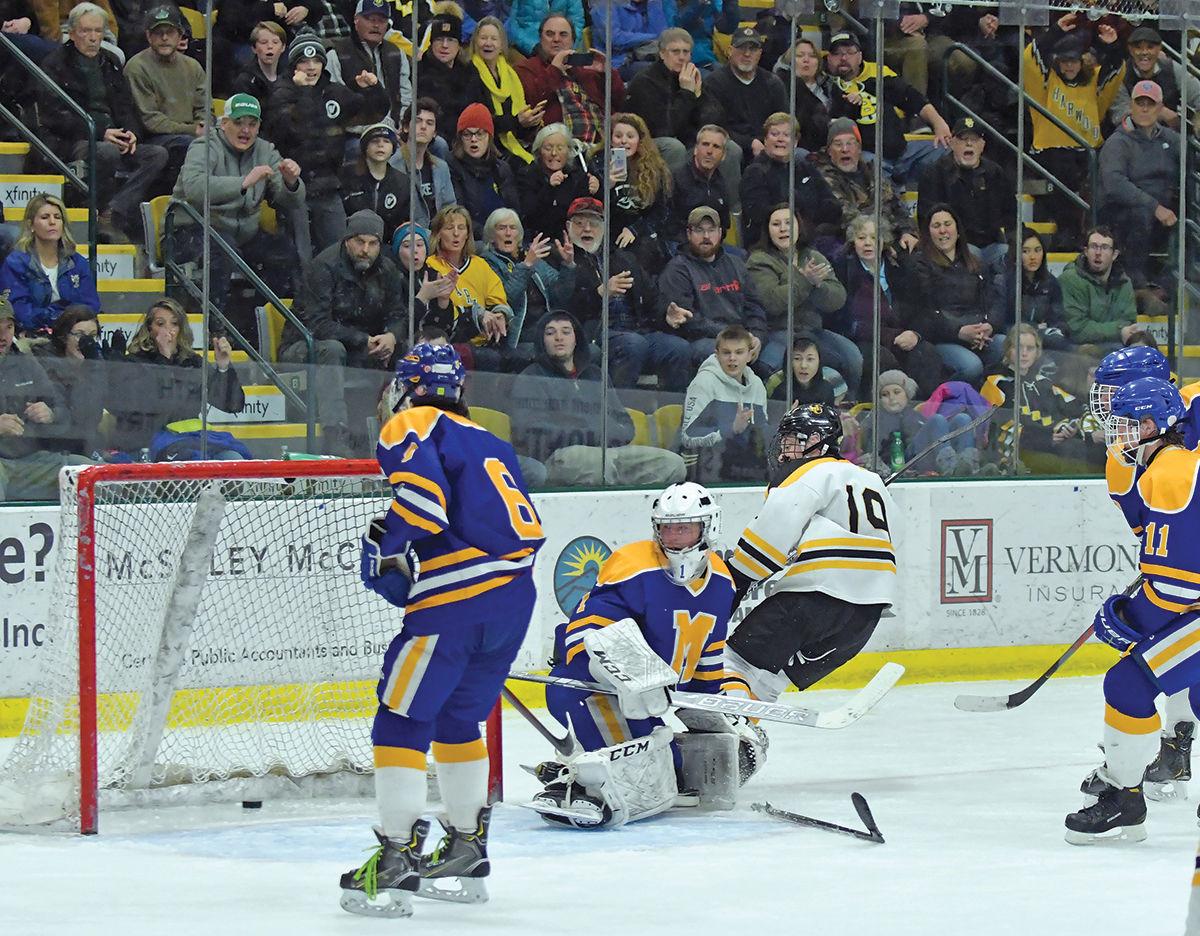 Skylar Platt looks back at the Milton goal and sees his shot in the net, giving Harwood an overtime win in the Division 2 championship game. 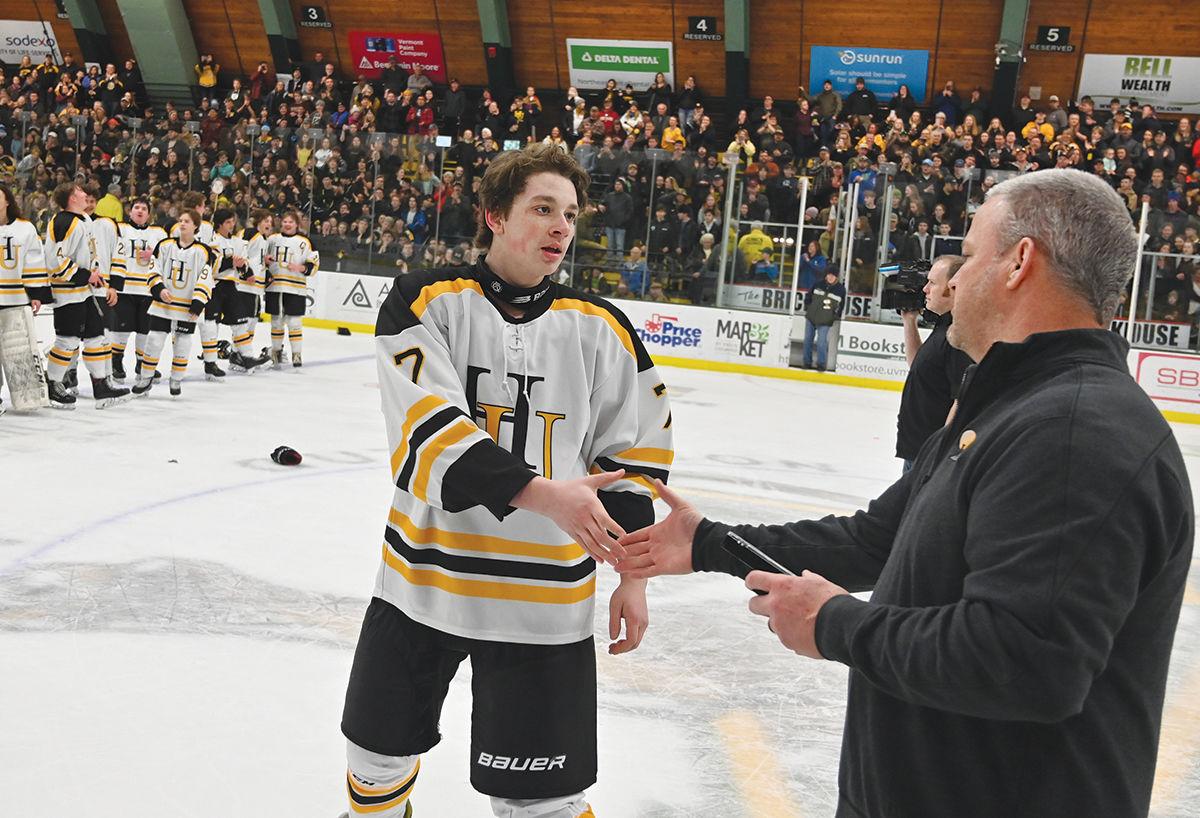 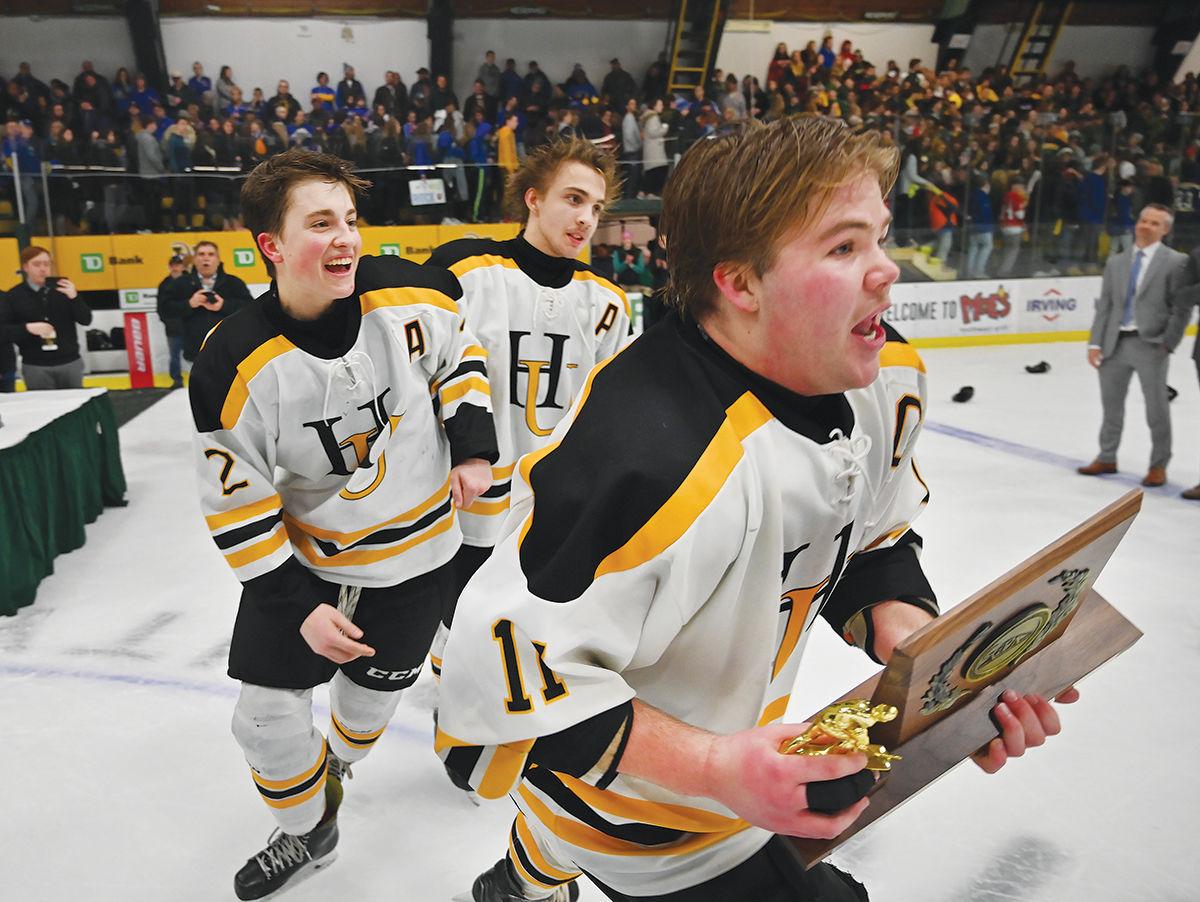 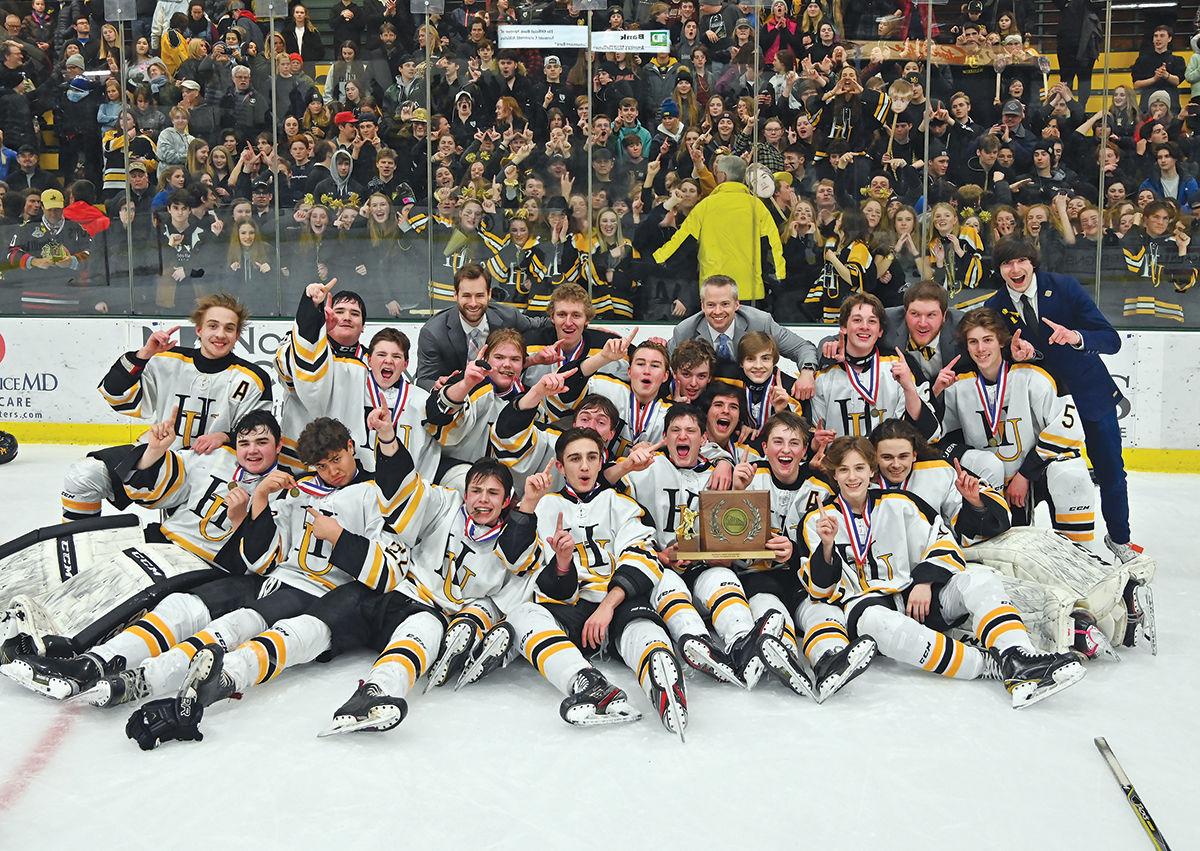 When Finn O’Hara (left) and Skylar Platt were little kids, barely able to lace their own skates, they dreamed of winning a state hockey championship for Harwood. Now, they have.

Skylar Platt looks back at the Milton goal and sees his shot in the net, giving Harwood an overtime win in the Division 2 championship game.

A team that lost a 2-0 lead in a state championship game could be forgiven for being a bit rattled as the game went into overtime — especially if that team is loaded with talented but still young underclassmen playing in the biggest game of their lives so far.

But that rattled team would not be the Harwood Union boys hockey team.

And, just like that, Harwood won the Division 2 championship, 3-2 — its first boys hockey title since 2005 and its third ever.

The win came last Wednesday, March 11, at the University of Vermont’s Gutterson Fieldhouse.

“All I can say is Platt has a thing for overtime wins against Milton,” said Finn O’Hara. He, Platt and Tanner Woodard form an all-sophomore line. Platt also scored the game-winner in Harwood’s 3-2 overtime victory against Milton in early February.

O’Hara had Harwood’s second goal in the title game, and he and Platt gave Harwood one of the most fearsome scoring duos in the state. Each had more than 20 goals.

“At any given time, having those two guys on the ice, it’s our game at any moment,” said Harwood’s first-year coach, Jacob Grout.

“I can’t really remember much,” Platt said later. “All I do remember is making a quick move around the defender. Somehow I still had the puck on my stick. I just knew I needed to fire it low and it popped in.”

Harwood capped a tremendous season — a 20-3 record, the No. 1 ranking in Division 2, and a state title. Milton was ranked No. 3.

Sylvia gave Harwood early momentum. After Highlander goalie Liam Guyette made a quick save to start the game, Sylvia beat Ehler 1:58 into the first period on an assist from junior captain Gavin Thomsen.

Ehler slammed the door after that, stonewalling Harwood several times in the next few minutes. Guyette was just as strong for Harwood, helping kill a Milton power play late in the first period.

Ehler stood tall in the Milton net, repeatedly snuffing out Harwood scoring chances. But halfway through the second period, Platt won a faceoff in Milton’s end and found O’Hara, who beat Ehler to make it 2-0.

“Sky won a great faceoff,” said O’Hara, who faked a shot before drilling the puck home.

Platt and O’Hara teamed up for dozens of goals this season.

“That’s my best friend,” Platt said with a nod toward O’Hara. “We’ve been skating on ponds together since we were 3.”

“I’ve been playing with Skylar since I was 5, 6 years old. It’s just amazing,” O’Hara said.

“Obviously tonight they got the goals,” Coach Grout said about his star forwards. “But they bring the energy level up every night; they bring everybody around them up.”

But the Highlanders couldn’t relax. Milton nearly scored seconds later, but Guyette made the save.

Ehler kept the game at 2-0, though, making several tough glove saves, and Nicholas Desouza finally scored on Owen Perry’s assist to make it 2-1.

The score reinvigorated Milton, but Guyette and his defense held the line. Harwood nearly scored as the second period ticked down, but Ehler snatched a high, arcing deflection as several Highlanders crashed the net.

With just 3:14 left in regulation, Milton’s Chris Lefebvre scored after Cooper Goodrich fired a shot that hit Guyette and fell to the ice. Lefebvre redirected the puck into the net; the Highlanders immediately began pleading with the officials to take a second look at the call, as both Lefebvre and Guyette ended up in a heap as the puck crossed the line.

The officials did, even taking the apparent tying goal off the scoreboard during the review, but eventually ruled it as a goal. The game was tied 2-2 with only minutes left.

Harwood had won a pair of tight games in the playoffs, beating Missisquoi on a last-second goal in the quarterfinals and coming back from a 2-0 deficit to beat Hartford 4-2 in the semifinals, so Grout and his staff weren’t worried. It’s easy to be confident when you have Platt and O’Hara on the ice.

“They are the gladiators of this team,” Grout said. “Right to the bitter end, those guys fight.”

Harwood put big pressure on Ehler, who thwarted several Highlander chances. But that pressure paid off when Platt, headed for the goal, was taken down hard by Milton’s Owen Perry with just five seconds left in regulation. Perry got two minutes for roughing, which extended into overtime, putting Harwood on the power play.

Grout sent out Green, O’Hara, Platt, Sylvia and fellow underclassmen Jon O’Brien to start overtime, but Desouza got a breakaway less than a minute into OT. But Guyette made the save, and the Harwood fans who packed the arena let out a sigh of relief.

Harwood regained possession with 54 seconds left in its power play, but Ehler stacked up two more impressive saves, his 34th and 35th of the night.

It looked like Milton would kill off the power play — until Platt split the defense for the game-winner.

The sophomore immediately dropped his stick and gloves and his momentum carried him in front of the erupting Harwood crowd, his teammates swarming him as the Highlanders celebrated their first title in 15 years.

Grout, a Harwood alum, took the reins of the boys program this season. He knew he had a talented bunch of skaters, though they hadn’t really coalesced the prior season.

“I watched them last year. I knew the talent level of all these guys,” Grout said. Captains Ollie Hammond and Jacob Cantwell and other two seniors on the team, Stefan Davis and Luke Spaulding, provided good veteran leadership. And Guyette, who had 27 saves in the title game, and fellow junior goalie Connor Dalley gave Harwood two solid starters between the pipes.

“We swapped the goalies on and off all year long,” Grout said. Guyette got the start in all three playoff games, but “we wouldn’t be here without the two goalies we have.” Thomsen and O’Brien are the other juniors on the squad, which has 12 sophomores and freshmen.

“It’s a very rare thing to get a sophomore class as solid as what we have now,” Grout sais.

O’Hara and Platt had dreamed of a Harwood championship ever since they could lace up their own skates.

“As kids, we dreamed about this; we talked about it. This is a dream come true,” O’Hara said.

“To be able to come out for Harwood and for the Mad River Valley community, and to be able to do this — it’s been a dream of ours forever and it just feels so good,” Platt said.