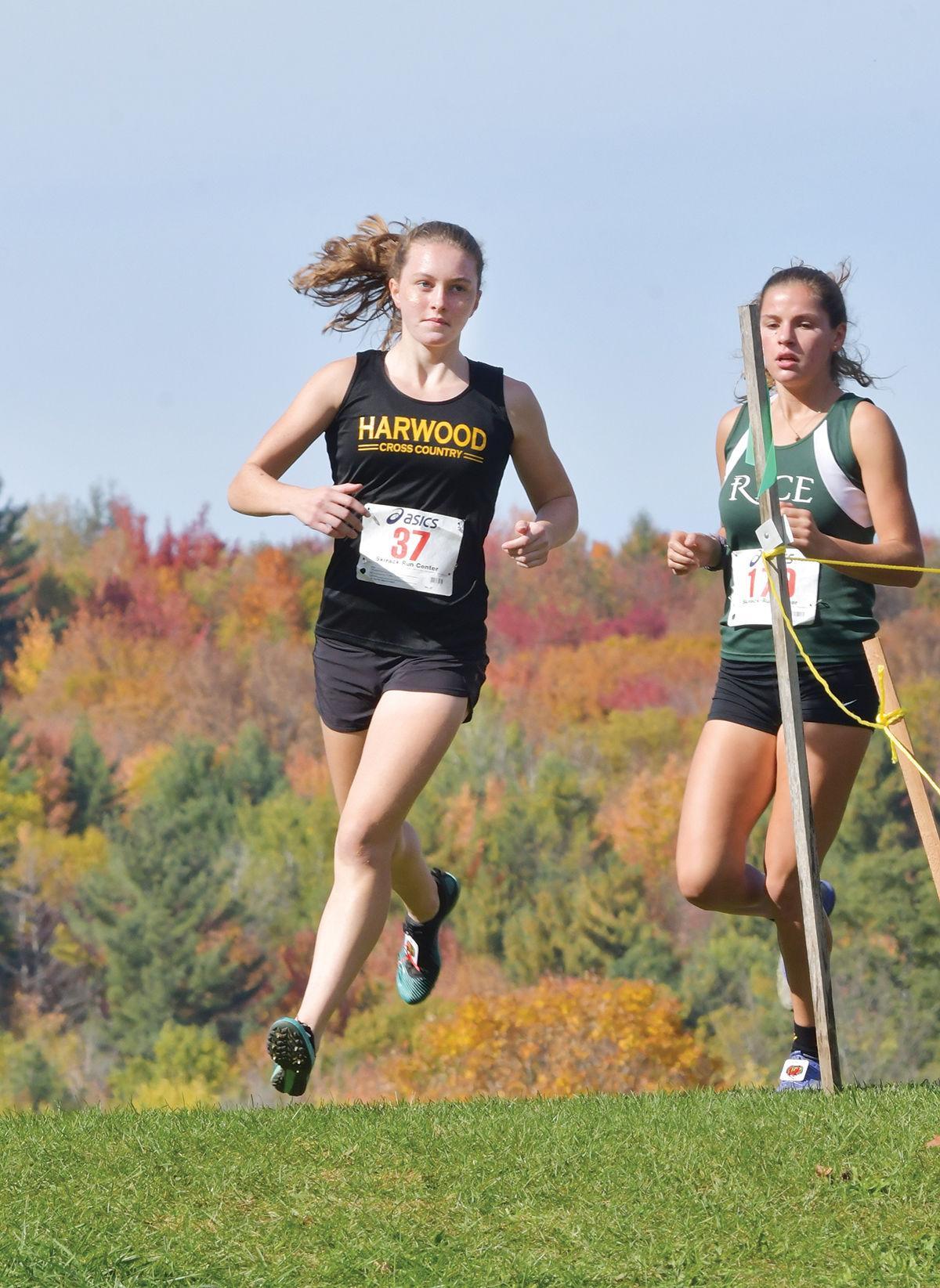 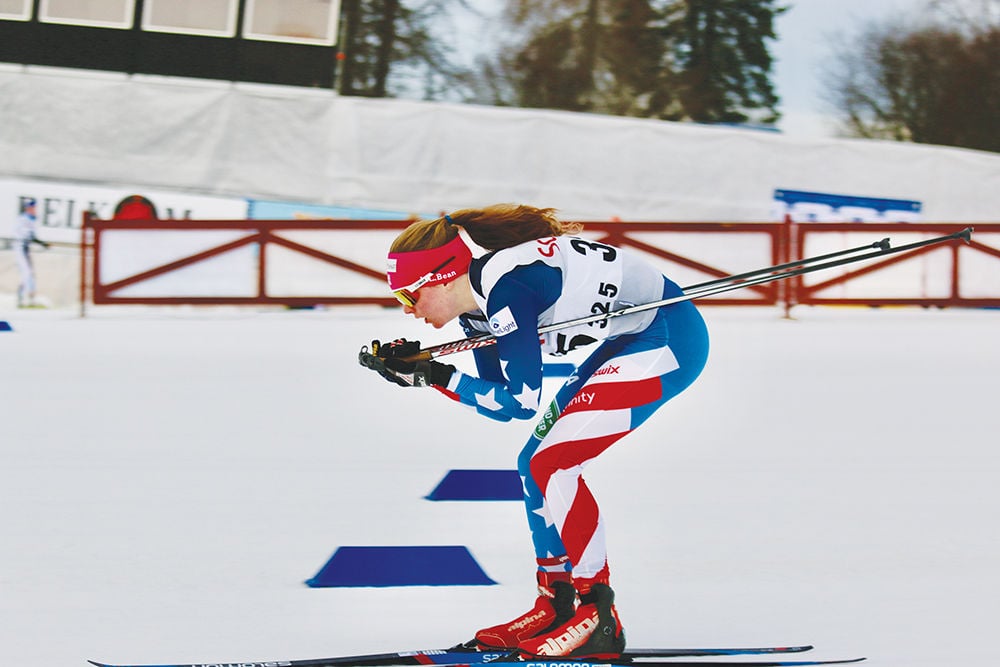 Ava Thurston goes into tuck position while skiing in Falun, Sweden, last weekend for Team USA at the Under-18 Scandinavian Championships and Junior World Championships.

Ava Thurston goes into tuck position while skiing in Falun, Sweden, last weekend for Team USA at the Under-18 Scandinavian Championships and Junior World Championships.

Thurston, a sophomore, has been named the 2019-20 Gatorade Vermont Girls Cross Country Runner of the Year — the top female cross-country runner in the state.

Gatorade made the announcement Monday, Jan. 27, but Thurston, whose championships helped Harwood claim the Division 2 team title the last two years, wasn’t around to collect her most recent honor in person.

That’s because Thurston was halfway around the world in Falun, Sweden, representing the United States in the other sport she’s come to dominate in her still-young athletic career: Nordic skiing.

Thurston skied in three events for Team USA at the Under-18 Scandinavian Championships and Junior World Championships this past weekend, Jan. 24-26.

Thurston earned her spot on the U.S. U-18 team based on her finishes at the U.S. Ski and Snowboard National Championships in Houghton, Mich., earlier this month.

Norway, Finland and host Sweden are powerhouses in international Nordic skiing, but Thurston did well against the top young skiers from those countries and from around the world in Falun. She finished eighth in a 5K classic individual race, helped her team place fifth in a relay event and narrowly missed the semifinals in a 1.4K skate sprint race.

“Sweden has been an amazing experience,” Thurston told the Waterbury Record via email on Tuesday. “I’ve had a lot of fun getting to know the other kids on the trip better, and it’s been super cool to race somewhere other than the U.S.”

Thurston was scheduled to get home on Wednesday, and soon will be skiing again for Harwood, which is aiming to win another Division 2 state championship.

Runner of the Year

Thurston is the first female Harwood harrier to be Gatorade Runner of the Year. The award criteria honor “not only outstanding athletic excellence, but also high standards of academic achievement and exemplary character demonstrated on and off the field.”

“I just heard about Gatorade runner of the year today, and am honored to have been chosen as a recipient of the award,” Thurston told the Record.

Thurston has maintained a 3.74 GPA while competing for Harwood across all three athletic seasons. She played lacrosse in her freshman year, and as a sophomore won the individual Division 2 cross-country race with a time of 19:19.9, a time that would have won the big-school Division 1 race by nearly 14 seconds. Five of Thurston’s teammates also placed in the top 20 at the state meet, helping Harwood win its 10th D-2 title in 11 years and second in a row.

“Our Harwood girls team was so strong this year, and everyone pushed each other to do the best they could at each and every race,” Thurston said. “(Coach John) Kerrigan’s training plan also works really well for me, and he does a great job encouraging positivity on our team.”

“In my 45 years of coaching, I’ve never had an athlete as gifted, hard-working and unselfish as Ava,” Kerrigan said. “She’s a strong athlete who continues to improve, and her best is yet to come.”

Thurston joins a handful of other Harwood athletes who have been Gatorade athletes of the year in their respective sports. Others include Tim Chant, Eric Morse, Taggert Haslam and Ray Van Rooyen in track and field, Sam Nishi in cross country and Tor Fiske in boys soccer.

Every year, Gatorade names a boy and girl athlete of the year in 12 sports for all 50 states and the District of Columbia. Thurston is now a nominee for national Runner of the Year, and her Vermont award allows her to donate $1,000 to a local or national youth sports organization of her choice. She can also submit an essay to compete for one of 12 additional $10,000 grants, which can also be awarded to an organization of her choice.

Thurston’s best finish in Falun came on the first day of competition, when she finished eighth among 103 skiers in the 5K classic individual start. Her time of 21:39.4 tied with Finland’s Elisa Mattila. Sweden’s Tove Ericsson won the race in 20:12.7, Tuva Anine Brusveen-Jensen and Emma Kirkeberg Moerk, both of Norway, were second and third in 20:24.0 and 20:27.7.

“I had a great first race in the individual classic 5K, and was able to carry that momentum through the sprint and relay races,” Thurston said. “We also got to train before and after our races at many different venues, all of which I really enjoyed.”

On Sunday, she skied classic in the first leg of a three-leg relay race; she and her two teammates finished fifth among 23 teams.

Six of Harwood’s gymnasts stand in their special pink uniforms after a competition earlier this season. Sporting special uniforms, Harwood’s gymnastics, girls and boys basketball and girls and boys hockey teams all held special events and games to raise money for cancer awareness and research. The teams raised $6,854 that was donated to the American Cancer Society, Camp Ta-Kum-Ta and Susan…