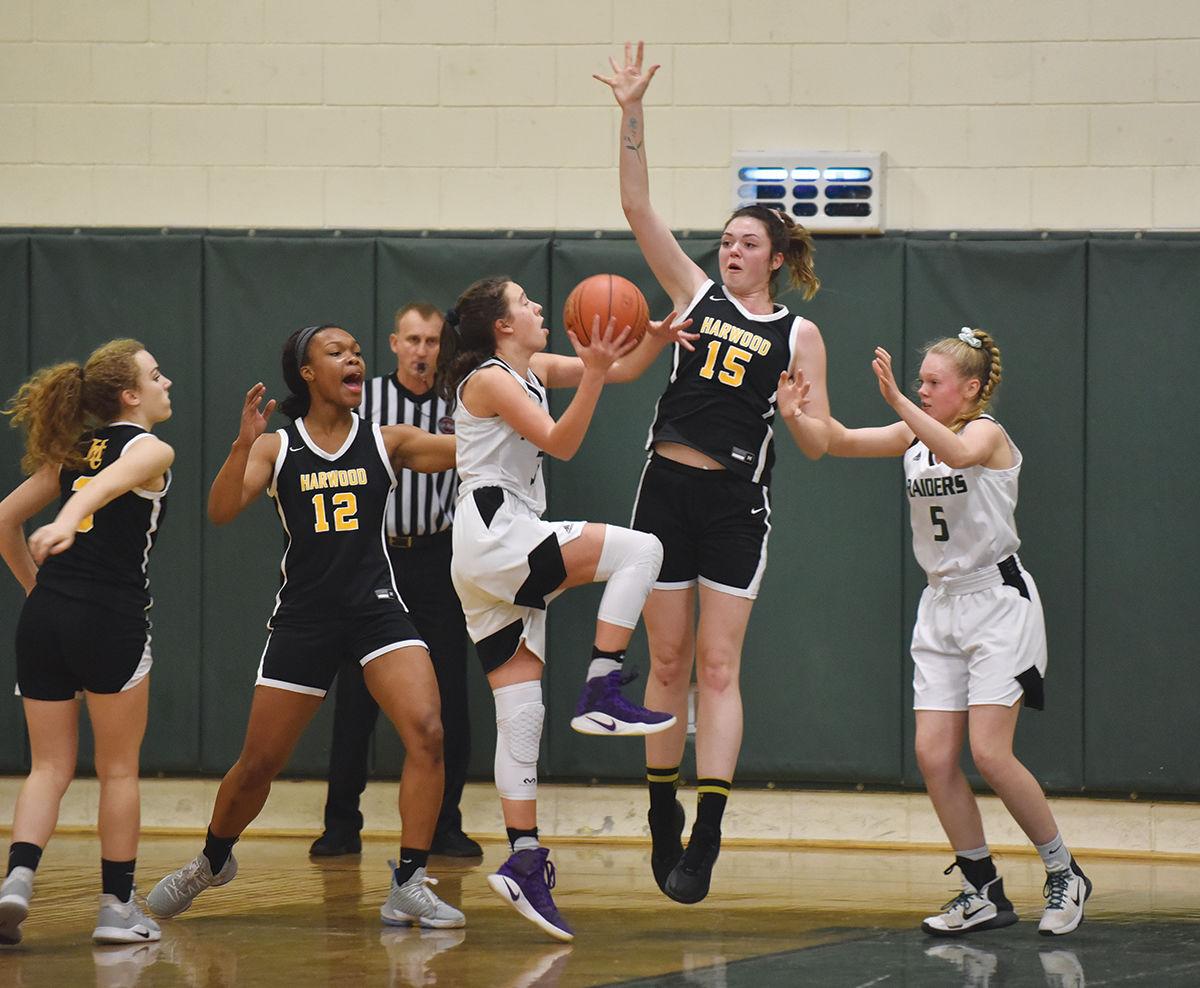 Mia Cooper’s dominant defense in the paint was a big reason Harwood was able to race past Stowe, 51-10, and boost the team’s season record to 5-0. 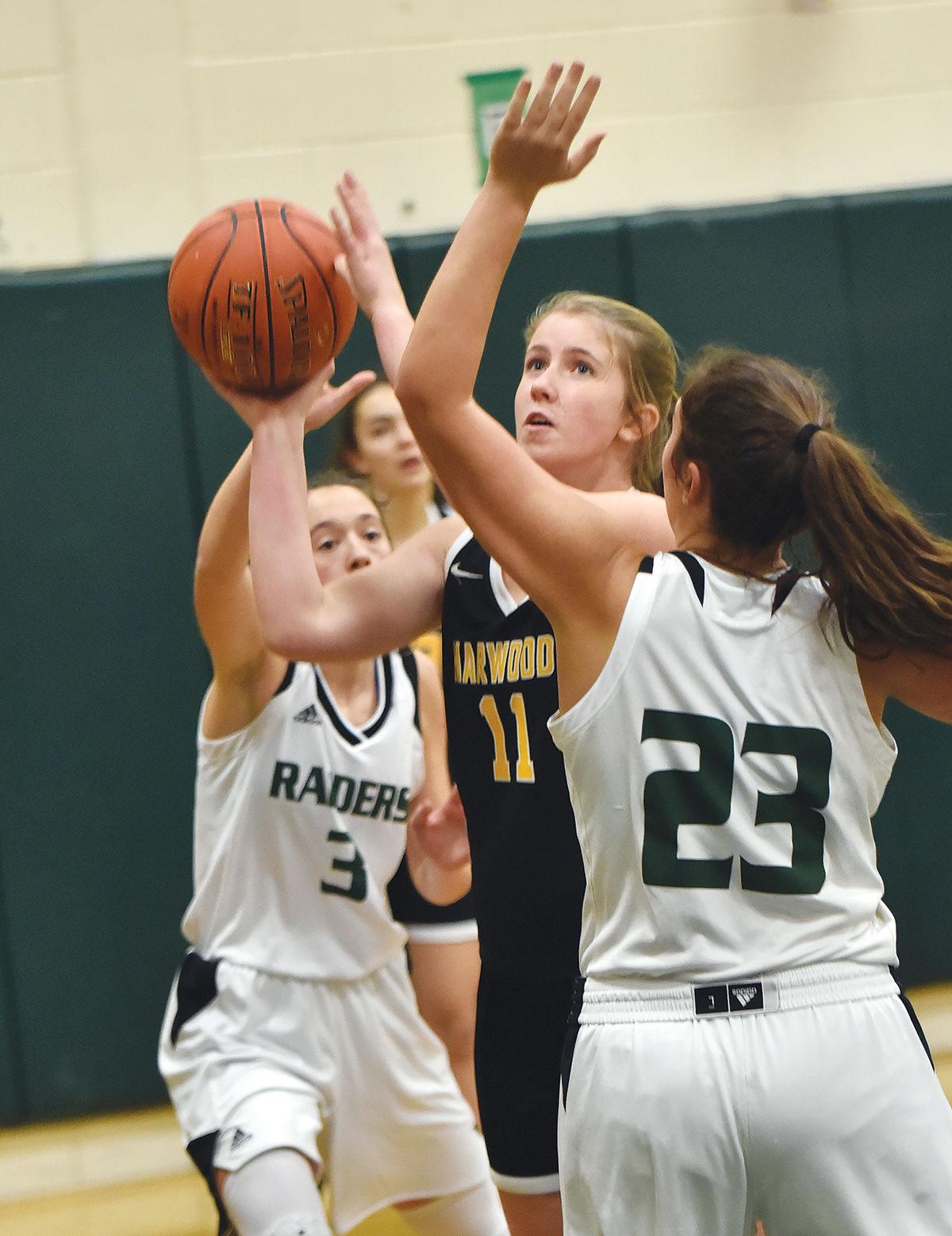 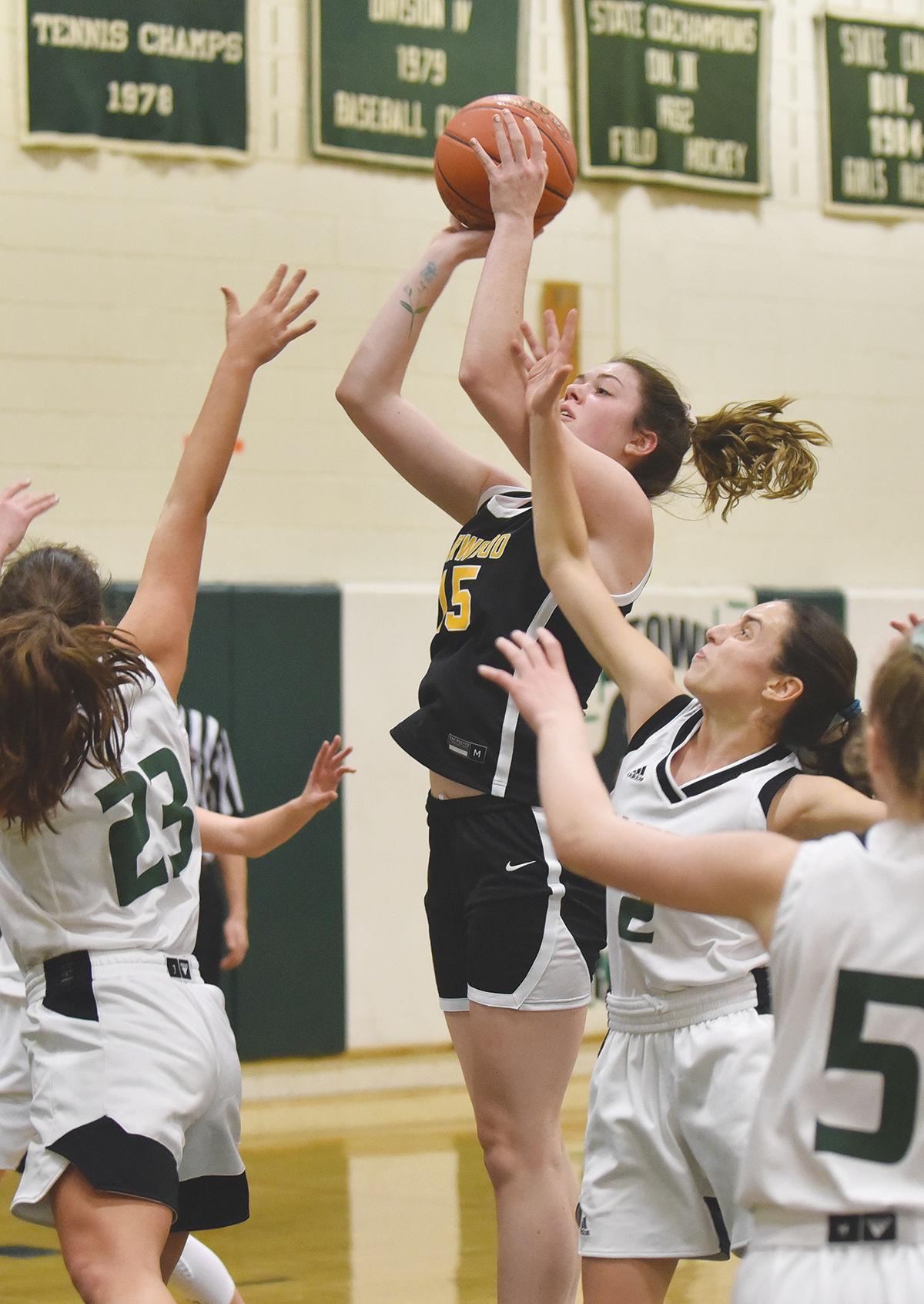 Mia Cooper’s dominant defense in the paint was a big reason Harwood was able to race past Stowe, 51-10, and boost the team’s season record to 5-0.

Harwood led 24-4 at halftime, and kept up the pressure in the second half in a road win over Stowe.

“Our rotation defense was so quick,” said Harwood coach Tommy Young, as the team piled up double-digit steals and deflections for the game.

Abby Lehmann was the top scorer for Stowe with five points.

Harwood, now 5-0, is one of three unbeaten teams in Division 2 at the quarter-point of the season; the others are Springfield and Fair Haven.

Harwood used a tough 2-3 zone defense to hold Peoples at bay; the Highlanders were up 19-7 at halftime and 25-14 after three quarters before both teams opened up the offense in the final frame, when Harwood outscored PA 18-11.

“Our defense was tremendous,” Harwood coach Tommy Young said. He’s had the team working in the weight room all season, and it’s really paying off. “Their energy and endurance at the end of the games is really helpful.”

For Harwood, Emma Ravelin went 8-for-8 from the foul line and finished with 12 points and Tanum Nelson had eight. As a team, the Highlanders went 12-for-14 at the charity stripe and the trio of Mia Cooper, Ella Gannon and Ashlyn Carst teamed up to grab 22 rebounds.

The Highlanders demolished rival U-32, completing a season sweep of the Raiders and improving to 8-0 on the season.

Goalie Connor Dalley stopped 20 shots for his second shutout of the season.

Harwood is the only unbeaten team left in Division 2. U-32 dropped to 0-8.

Harwood’s duo of Skylar Platt and Finn O’Hara provided the offense and goalie Liam Guyette outdueled Milton netminder Jackson Ehler in a matchup of two of the top teams in Division 2.

Both goalies turned in stellar performances, as Guyette stopped 19 of the 20 shots he faced and Ehler turned away 38 of the 40 Harwood shots.

“Jackson Ehler stood on his head” to stonewall the Highlanders for much of the night, Harwood coach Jacob Grout praised. But Guyette’s poise as the game wound down and Milton pressed for the equalizer was a key to the game, said.

After a scoreless first period, Harwood took the lead when Platt assisted on O’Hara’s score just over a minute into the second period. Milton tied it up later in the period when Brandon Mitchell scored on assists from Zach Kay and Caleb Barnier.

The score stayed 1-1 until O’Hara and Gavin Thomsen set up Platt’s midway through the third period, putting Harwood on top for good.

As good as Ehler was for Milton, Grout said “the Skylar Platt and Finn O’Hara tag team could still not be silenced.”

It was Harwood’s seventh win of the season, matching its win total from last year with two-thirds of the regular season still to play.

Two freshmen scored nearly half of Harwood’s points in a home win over Vergennes.

The win was Harwood’s second this season.

Senior guard Ezra Samuel scored seven points, including a late bucket to seal the win after Vergennes rallied to make it a single-score game in the fourth.

The Highlanders also got key contributions from Michael Fuller and Chris James, who pulled “down big rebound after big rebound,” Bellows said. “Great team victory, with strong efforts from everyone.”

Lyndon nearly doubled up visiting Harwood in a battle of one-win teams.

David Stevens had 16 points and Sage Gosselin had 10 for Lyndon, which took an early lead and never looked back.

An early deficit proved too much for Harwood to overcome.

Lake Region led by 17 points after the first quarter, largely because of Harwood’s cold shooting. Harwood went shot-for-shot with the visitors the rest of the way, winning the final three quarters 42-40, but the damage had been done.

Harwood-Northfield’s Louisa Thomsen scored the game’s only goal with five minutes to play.

The two squads went scoreless for two periods before Nichole Pappas set up Thomsen for the game-winner.

Harwood-Northfield pounded the puck at Rutland goalie Kristen Pariseau, who had a staggering 52 saves, but wasn’t able to break through until Thomsen scored.

Reese Clayton and Louisa Thomsen had two goals and one assist apiece for Harwood-Northfield, and Rachel Fernandez scored once and assisted on four other goals.

Clara Griffin and Hailey Brickey each had a goal and an assist for Harwood-Northfield, Olivia Kaplan also scored and Kailie French, Halle Joslin and Molly Yacovoni had assists.

Lexi James and Isabel Masi scored for PA-Stowe, and Sage Lively had an assist on Masi’s score.

Harwood Union’s Nordic skiers have been competing in the annual Tour de Chittenden since late last week. The three-event tour includes different styles of races all over Chittenden County. Harwood’s Ava Thurston won the final event of the tour and finished fourth-overall. Here’s a rundown of how Harwood skiers did in the events. Racers are listed by finish, name, and time.

Harwood Union High School’s wrestlers take it to the mat

Girls hockey team is off to a good start