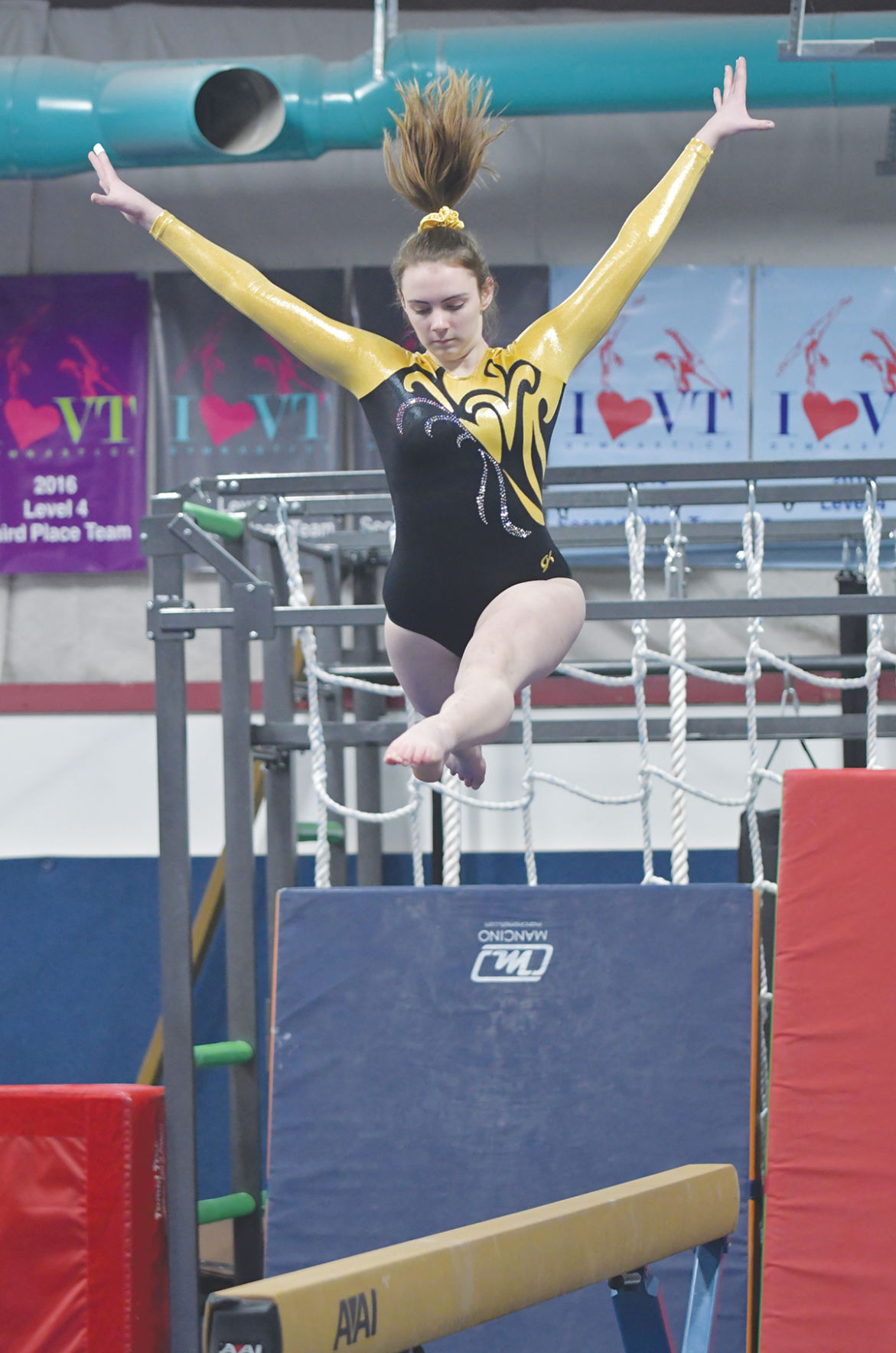 Lynn Russell placed second and teammate Delana Cheney, above, finished first in the overall competition in a Harwood gymnastics meet with South Burlington. The Harwood team was edged because it was short two competitors. 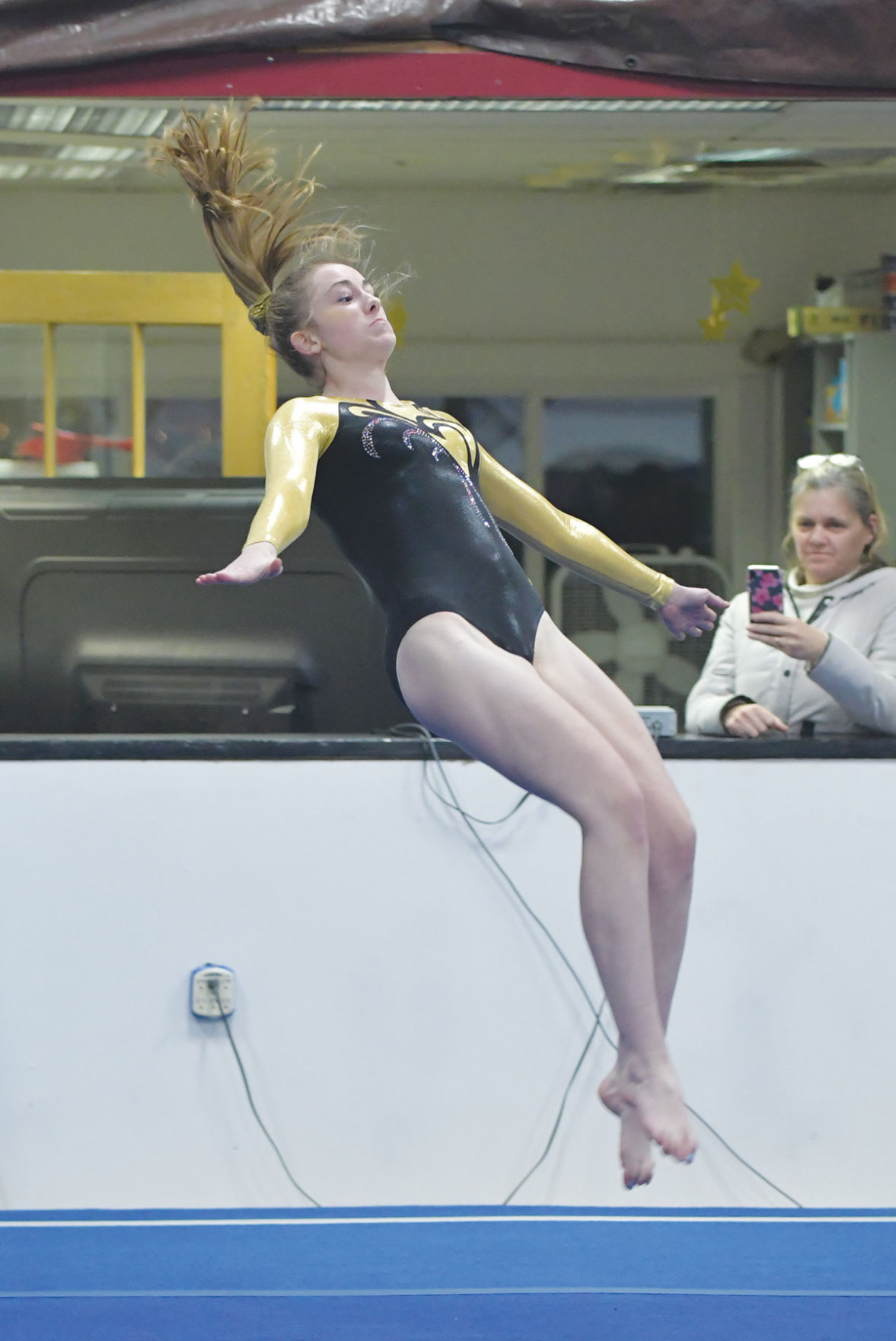 Lynn Russell, above, placed second and teammate Delana Cheney finished first in the overall competition in a Harwood gymnastics meet with South Burlington. The Harwood team was edged because it was short two competitors. 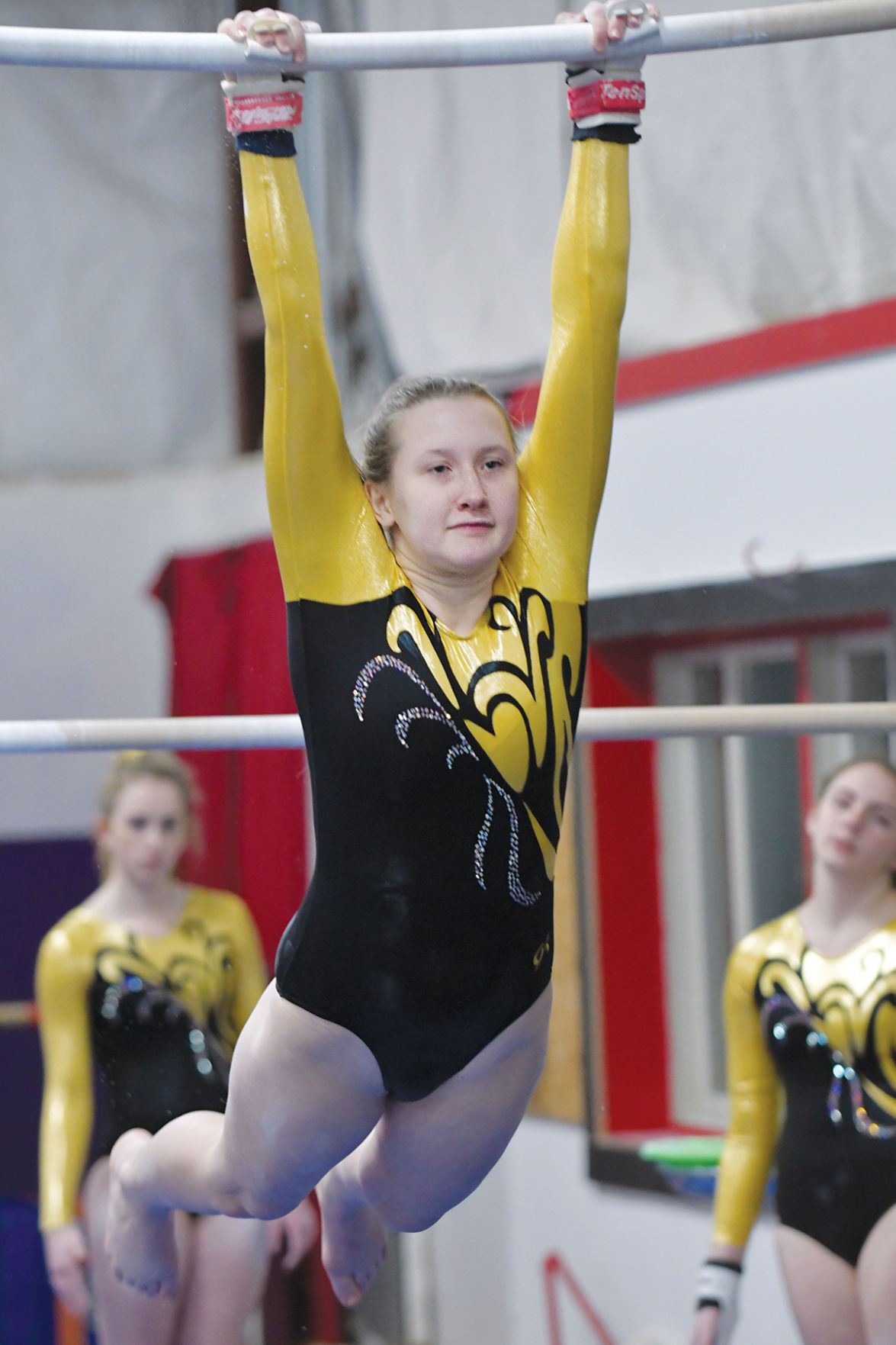 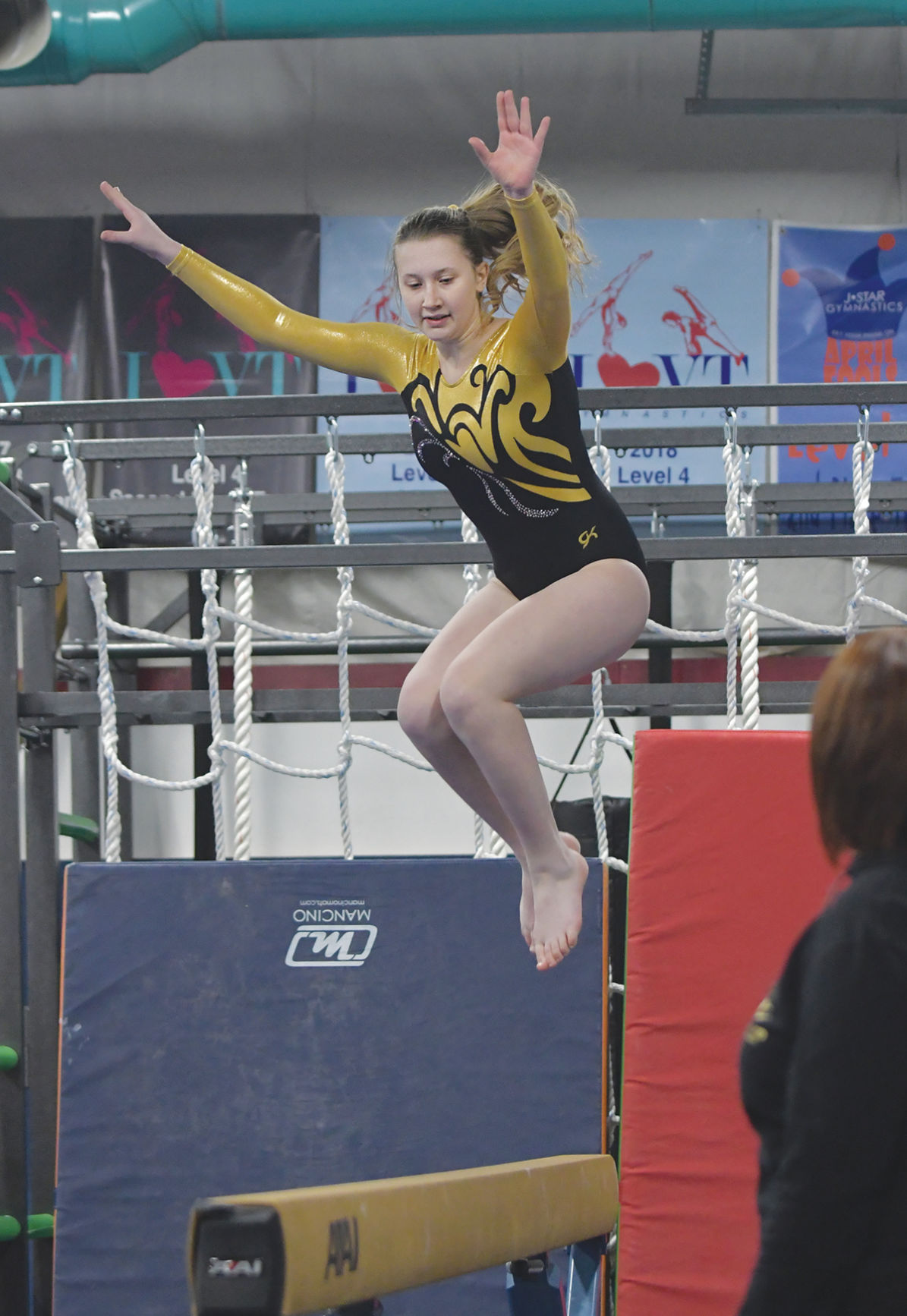 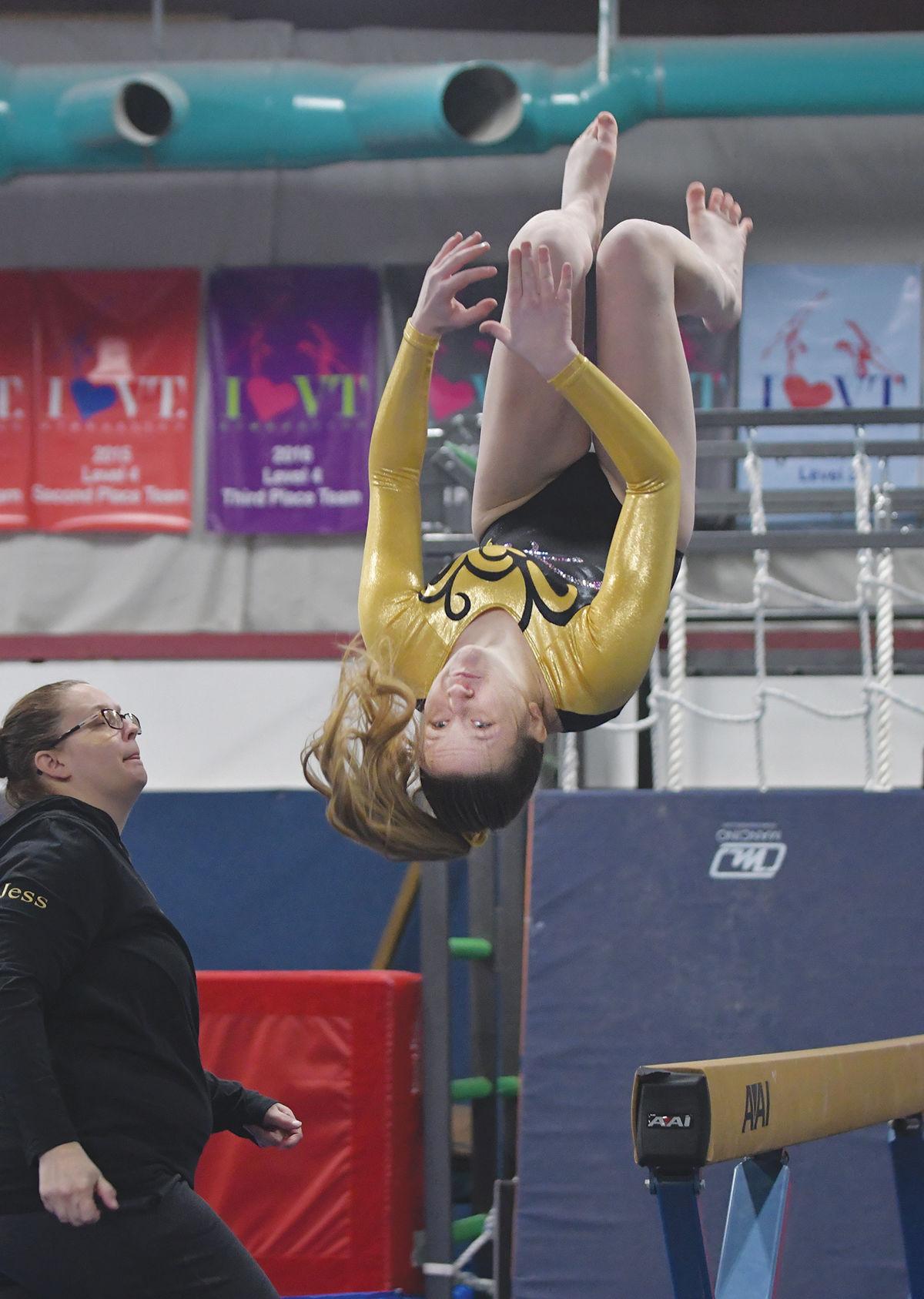 Lynn Russell placed second and teammate Delana Cheney, above, finished first in the overall competition in a Harwood gymnastics meet with South Burlington. The Harwood team was edged because it was short two competitors.

Lynn Russell, above, placed second and teammate Delana Cheney finished first in the overall competition in a Harwood gymnastics meet with South Burlington. The Harwood team was edged because it was short two competitors.

Harwood took first place in all four individual events and Delana Cheney earned the overall individual win, but South Burlington eked out the team win because the Highlanders were short two gymnasts.

Cheney finished with a 30.3 to win the all-around competition. Her teammate Lynn Russell was second with a 27.05 and South Burlington’s Sarah Henry was third with 26.10.

Cheney finished first in three events, winning bars with a 6.0, beam with an 8.25 and blowing the competition away with an 8.65 to win floor. Cheney also finished second in vault, which Russell won with a 7.6.

Russell finished second on bars and beam; on floor, Harwood freshman Olivia Bloom finished tied for second with South Burlington’s Henry and Sydnie Dougherty, as all three gymnasts had scores of 6.8.

With two missing athletes, Harwood didn’t have enough scoring gymnasts competing in each event and had to take zeroes for the missing competitors, allowing South Burlington to edge the Highlanders for the overall team victory.

Skylar Platt struck for a hat trick and assisted on another score to lead Harwood past visiting U-32.

U-32 kept things close until late in the second period, when Harwood blew the game open.

Finn O’Hara had another stellar game on offense, scoring twice and assisting on three other goals, and Tyson Sylvia and Gavin Thomsen had one goal apiece. Ollie Hammond had three assists, Jacob Green had one and goalie Connor Dalley stopped 16 shots.

U-32 goalie Keegan Lamson made 28 saves.

Four players scored for Harwood as it thumped Mount Mansfield in the first home game of the season.

“O’Hara was a powerhouse all game long on all areas of the ice,” Harwood coach Jacob Grout said.

Harwood’s Sully O’Hara and Dagan Siner each won his weight division at a meet hosted by Otter Valley.

The win was O’Hara’s second this year. He also won the 170-pound division at a meet in Middlebury during the holiday vacation.

Up 9-7 after the first quarter, Harwood held host Northfield to just seven points the rest of the game in a blowout win.

Sophomore Tanum Nelson did a little bit of everything; she was the team’s top scorer with 17 points, and also had eight rebounds, five steals and three assists. Mia Cooper also filled up the stat sheet with 14 points, six blocks and five rebounds. Emma Ravelin had 11 points and Ashley Proteau had seven points and eight steals.

Harwood blew the game open by outscoring Northfield 19-2 in the second quarter; nine of Harwood’s 12 players scored in the contest.

U-32’s Carter Pelzel and Owen Kellington teamed up for 30 points in a win at Harwood.

The Highlanders held undefeated U-32 in check well into the second half. The score was tied 27-27 midway through the third quarter before U-32 finally got rolling to pull away.

Meghan Lehouiller and Madison Chagnon scored five goals between them as Burlington-Colchester won at Harwood-Northfield.

Burlington-Colchester, one of the top teams in Division 1 this season, improved to 6-0. Harwood-Northfield, which plays in Division 2, is now 4-2.

The Harwood girls finished fifth and the boys were sixth at freestyle races hosted by U-32.

Junior captain Mackenzie Greenberg had the top overall finish of any Highlander, coming in 11th in the girls race with a time of 19:17.22. Caelyn McDonough was 31st, Maisie Frank 32nd, Sydney Kulis 36th and Ayla Oshkello 48th.

U-32 was second in the girls race with 41 points and Mount Mansfield third with 59.

Harwood was sixth with 133 points. U-32 won the event with 15 points and Champlain Valley and Lamoille Union tied for second with 48.

Harwood Union High School’s wrestlers take it to the mat