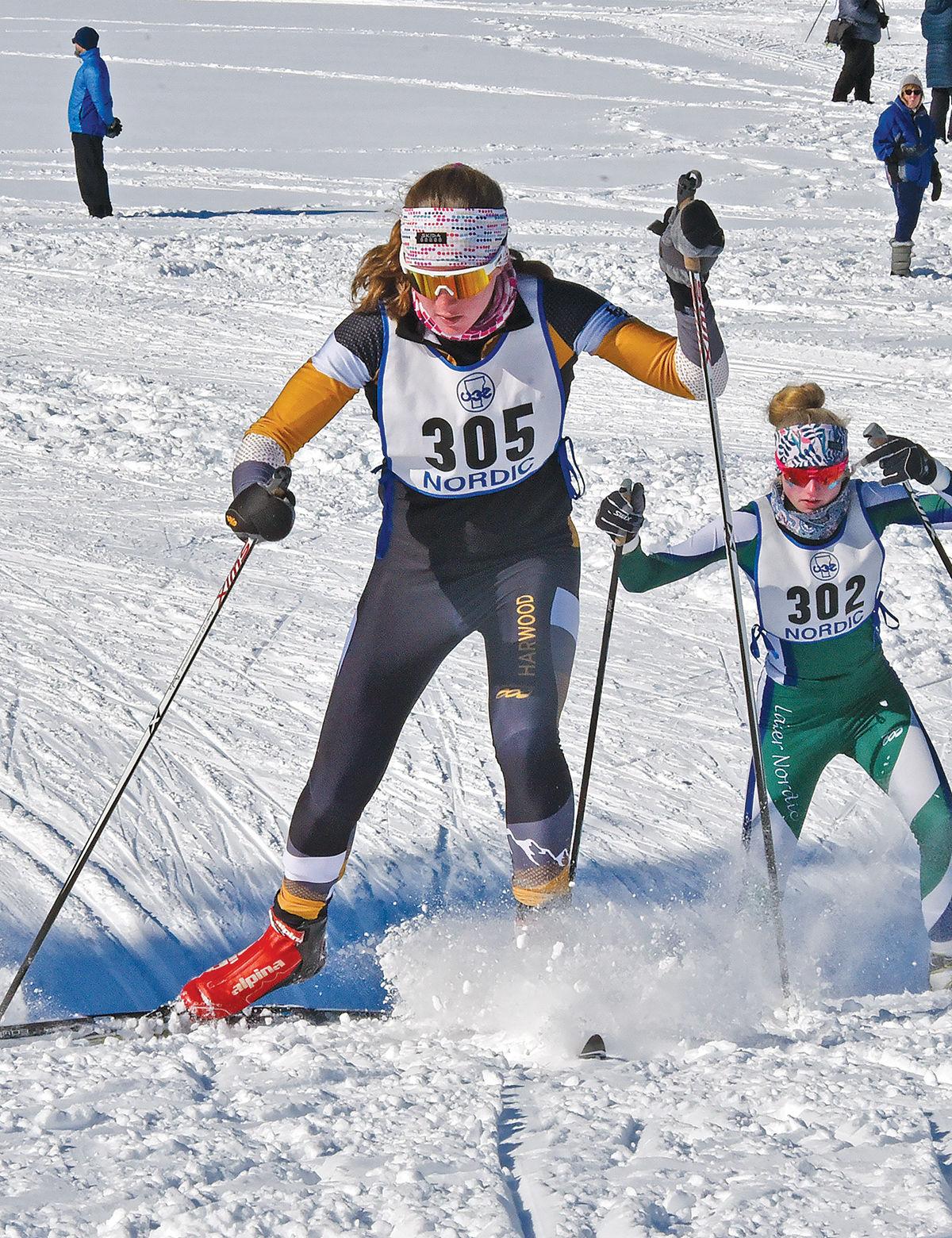 Harwood’s Ava Thurston blasts her way up an incline in a 5K race at U-32. Thurston finished almost three minutes ahead of the second-place skier. 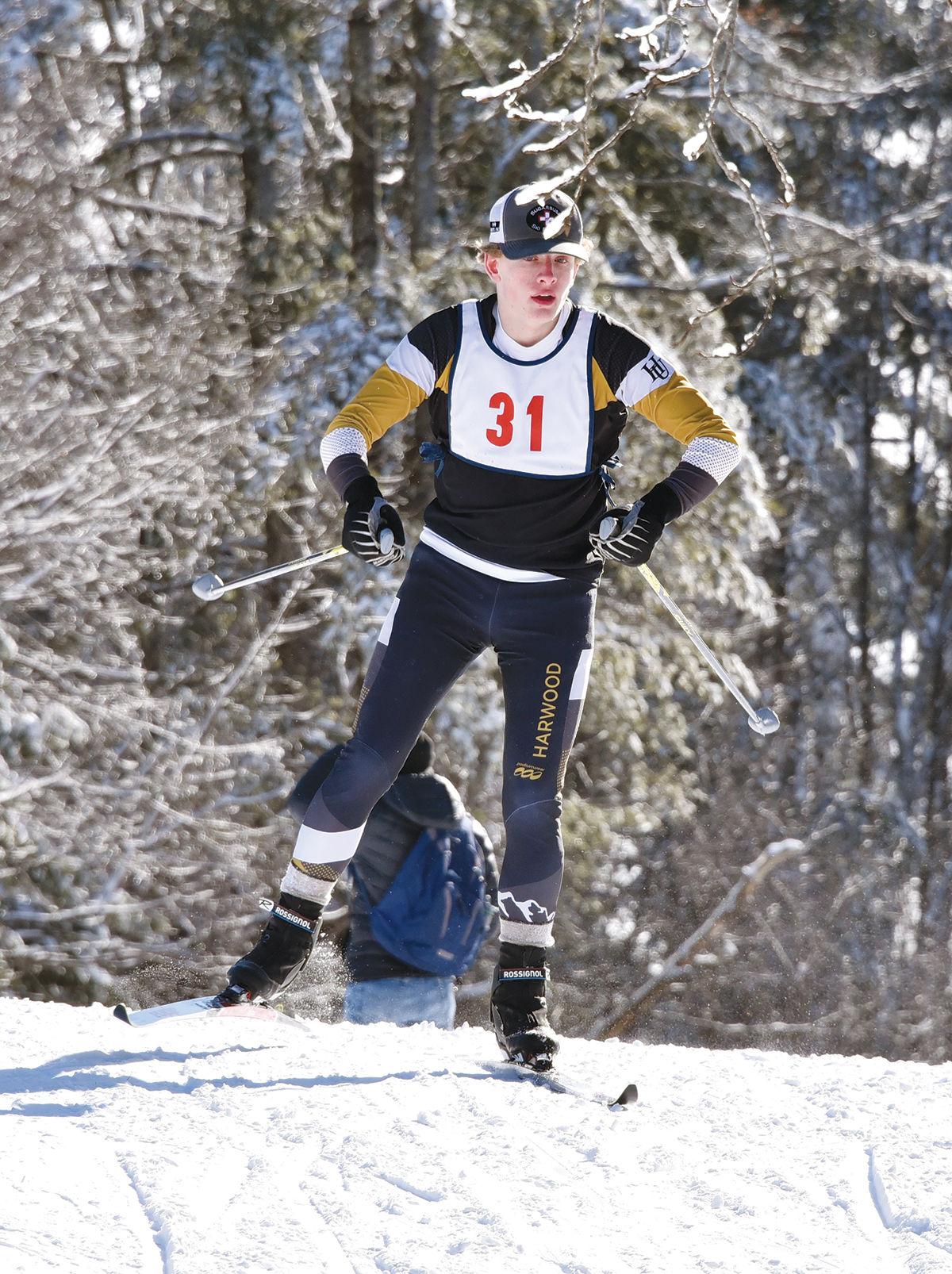 Gus Mosle of the Harwood boys Nordic team skis to a 49th-place finish in a competition at U-32. 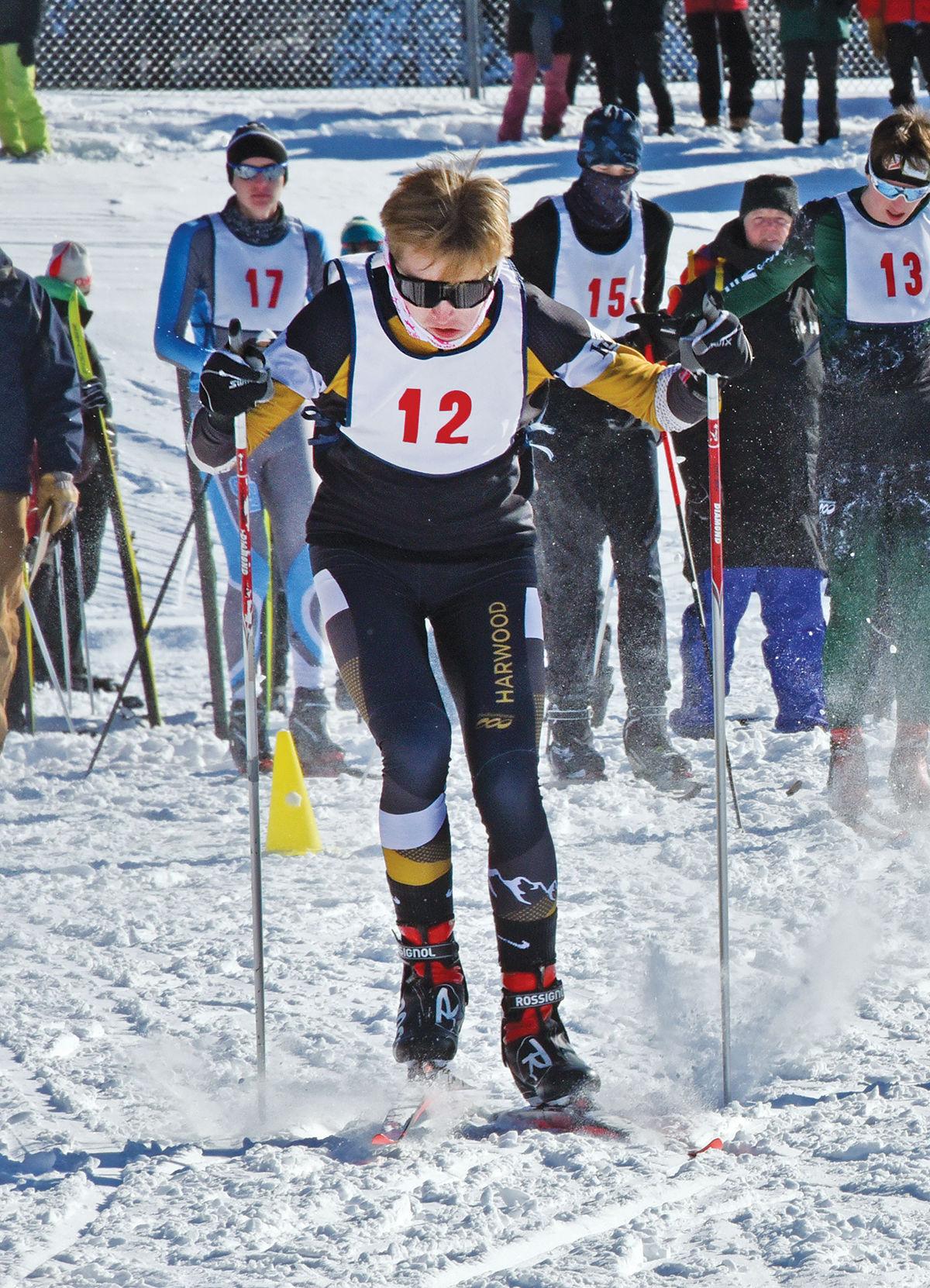 Harwood’s Ava Thurston blasts her way up an incline in a 5K race at U-32. Thurston finished almost three minutes ahead of the second-place skier.

Gus Mosle of the Harwood boys Nordic team skis to a 49th-place finish in a competition at U-32.

Harwood’s Ava Thurston won again, claiming the top spot on the podium at the U-32 Invitational by nearly three minutes.

The Harwood girls were fourth as a team with 61 points and the boys were 10th with 148 points. U-32 won the boys race with 33 points and Burlington took the girls event with 31 points.

Here’s a look at how Harwood’s top skiers did individually; skiers are listed by place, name and time.

A 3-point barrage by U-32 blew the game open against visiting Harwood.

The home team was up 15-14 after the first quarter, then got hot from behind the arc and led 46-26 at halftime.

Aiden Hawkins added 11 points for U-32 and Anthony Engelhard had 10.

U-32 is now 14-2, second in Division 2. Harwood dropped to 4-12 and is ranked 16th in the division. The Highlanders were set to play Lake Region on Tuesday, after press time. Harwood, Lake Region and a handful of other squads are battling for the final playoff spots in the upcoming D-2 tournament.

Thomsen scored once in the second period and again in the third. Clara Griffin and Olivia Kaplan each scored in the first period to put Harwood-Northfield up early. Griffin added two assists and Hailey Brickey, Sarah Garvin, Eva Joslin and Nichole Pappas each had assists.

Harwood-Northfield’s dominance also showed up in the save totals for the two goalies; Highlanders goalie Kaylee Thayer stopped 14 shots in the shutout while Burr & Burton’s Lola Herzog stacked up 40 saves.

Harwood-Northfield is now 11-3-1 and in first place in Division 2 with five games left in the regular season.

Reese Clayton scored the only goal of the game in the second period as Harwood-Northfield outlasted North Country-Lyndon on the road.

Louisa Thomsen and Rachel Fernandez assisted on Clayton’s game winner and goalie Kaylee Thayer made the lead stand up with 24 saves.

Ollie Hammond added a goal and two assists for the Highlanders and Tyson Sylvia and Jon O’Brien each scored once.

Harwood, now 14-1, is in first place in Division 2 with five games left in the regular season. The Highlanders play at Woodstock, a team just behind them in the standings, next Wednesday, Feb. 19, in a game that could decide the No. 1 overall seed in the upcoming D-2 playoffs.

Nelson added 10 steals to notch an unusual double-double, and Emma Ravelin chipped in with 11 points for Harwood, which was playing without a handful of regulars, including center Mia Cooper.

“It’s been nice to have so many kids stepping up,” Harwood coach Tommy Young said. “When their number is called, they do what they need to do.”

Harwood is now 12-2 and is ranked second in Division 2. The Highlanders likely need to win their final six regular-season games to ensure a top-four seed in a crowded D-2 field, which now includes several teams that dropped back from Division 1 this year.

Harwood opened up a 30-15 halftime lead, then held Montpelier off after the break to earn its fourth win in a row.

Nelson’s role at the top of the Highlanders’ lockdown defense gives her plenty of opportunities to steal the ball, and Harwood coach Tommy Young loves how she, Proteau and Ravelin work together.

“They feed each other a lot; it’s really special to watch,” Young said.

Bella Luhr scored half of Montpelier’s points with 16.

No information was available.

Six of Harwood’s gymnasts stand in their special pink uniforms after a competition earlier this season. Sporting special uniforms, Harwood’s gymnastics, girls and boys basketball and girls and boys hockey teams all held special events and games to raise money for cancer awareness and research. The teams raised $6,854 that was donated to the American Cancer Society, Camp Ta-Kum-Ta and Susan…