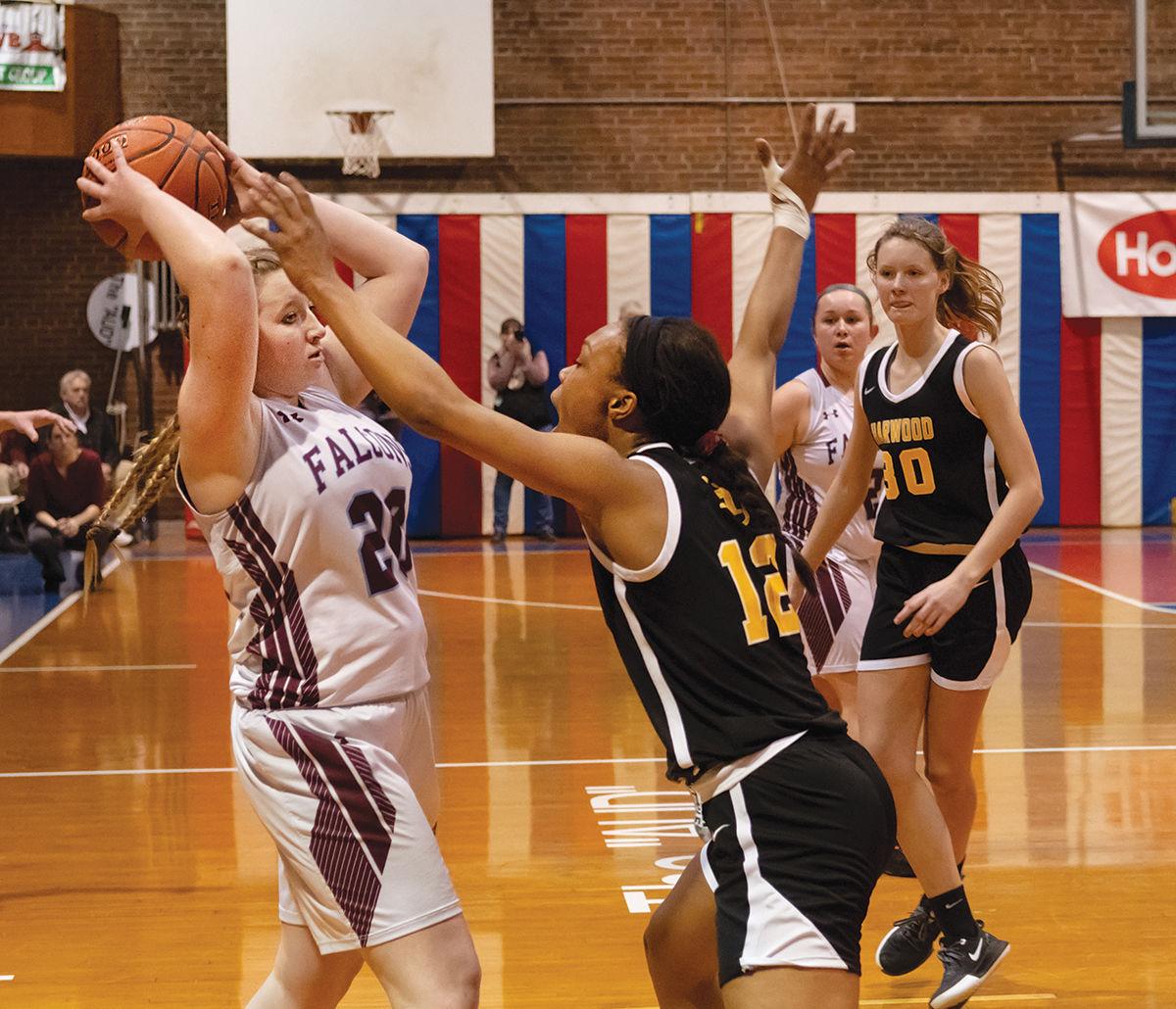 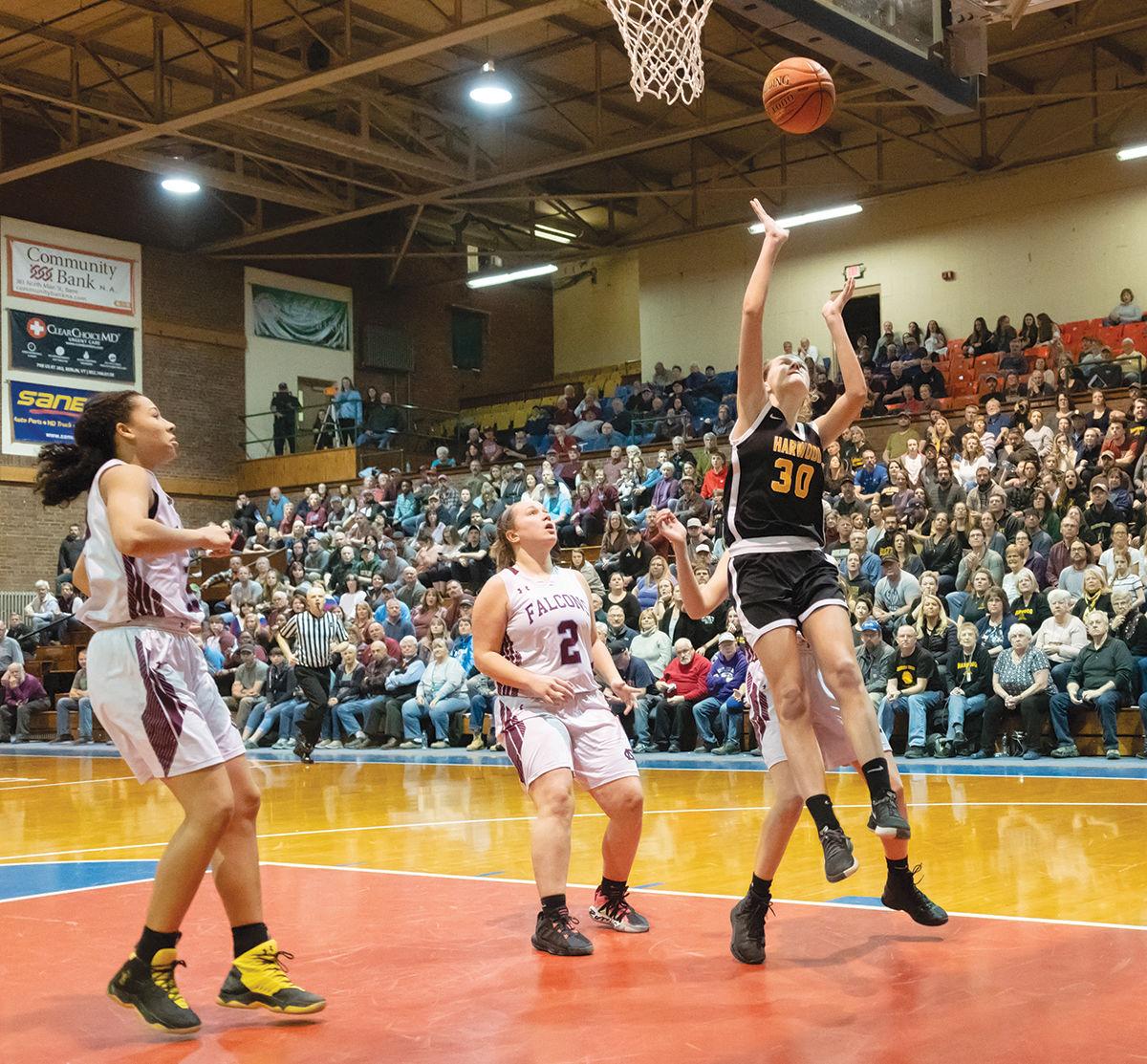 Tanum Nelson scores two of her 21 points in a semifinal win over North Country. 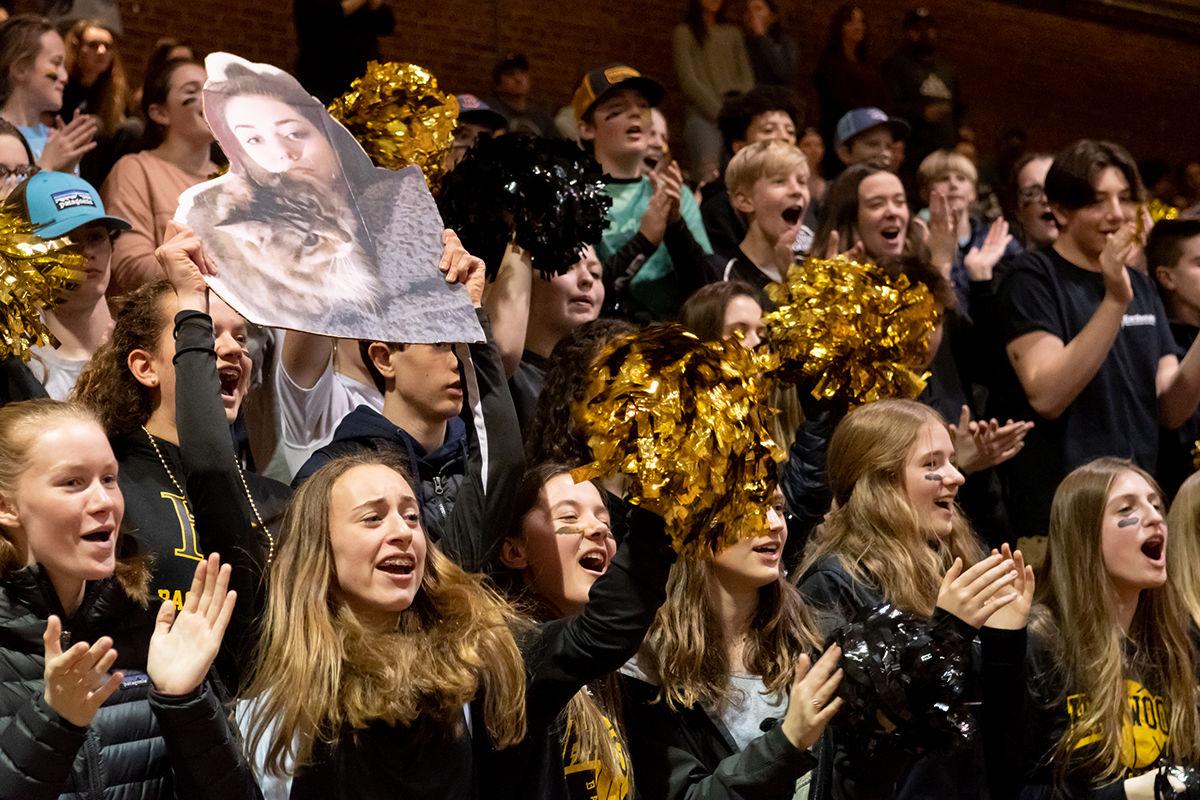 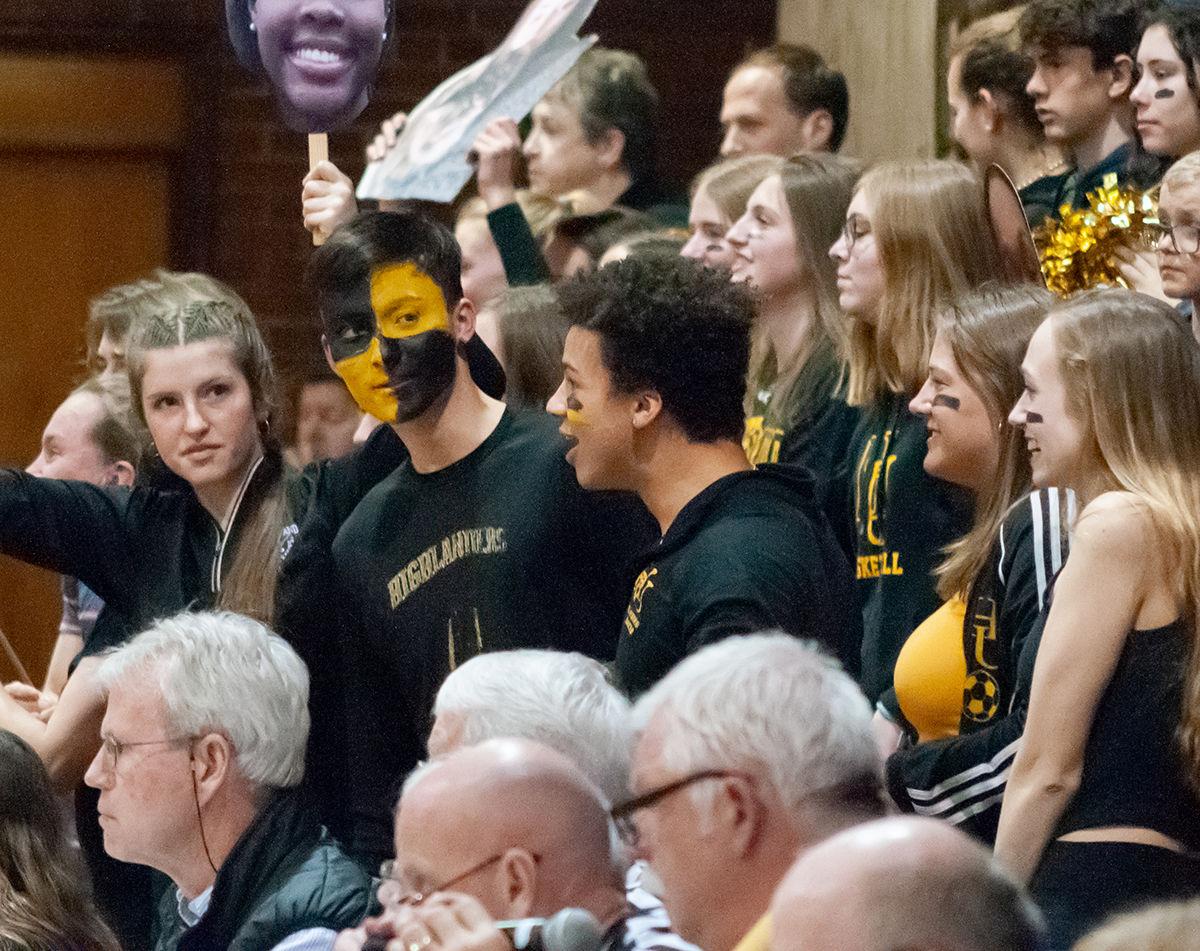 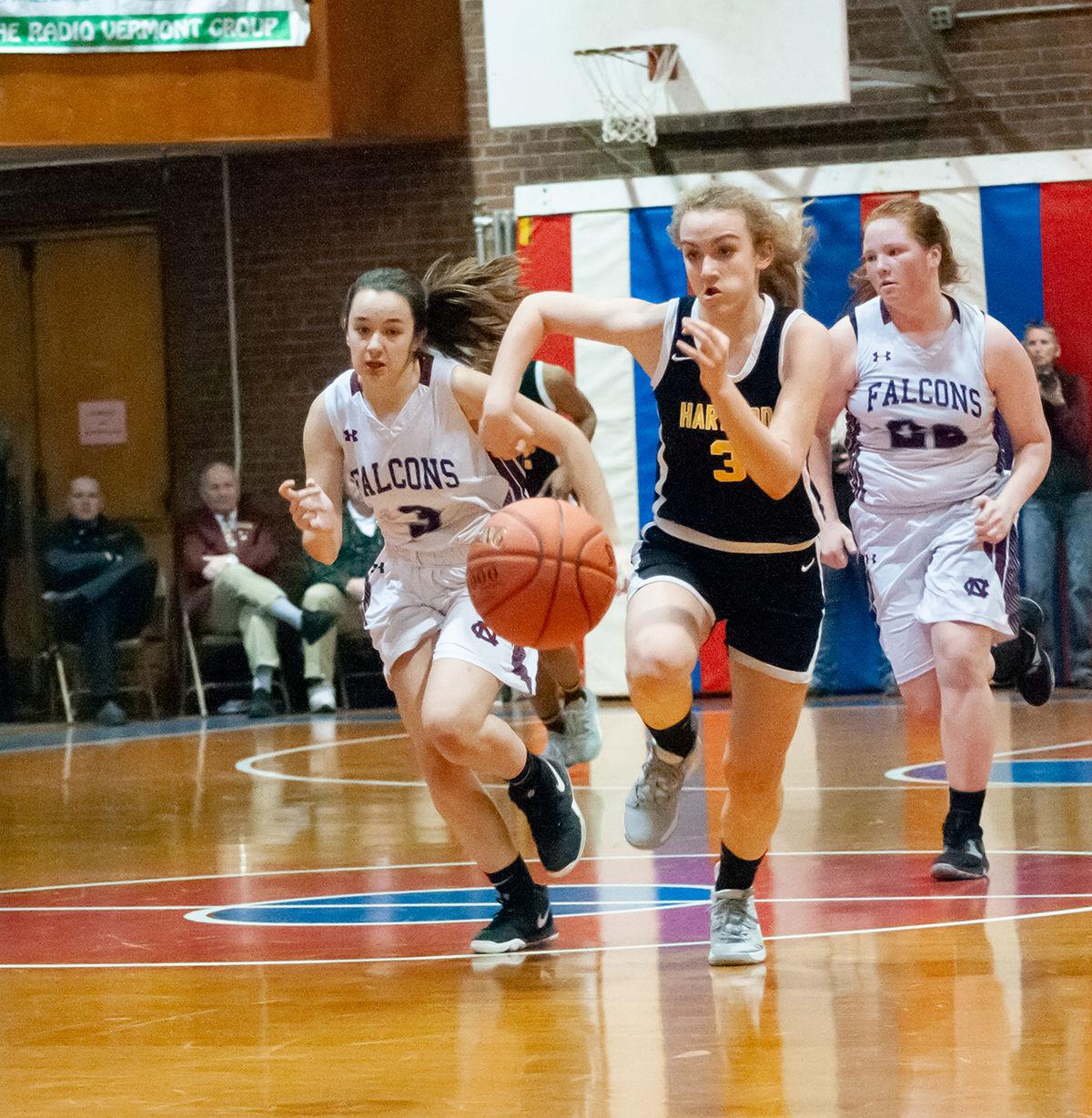 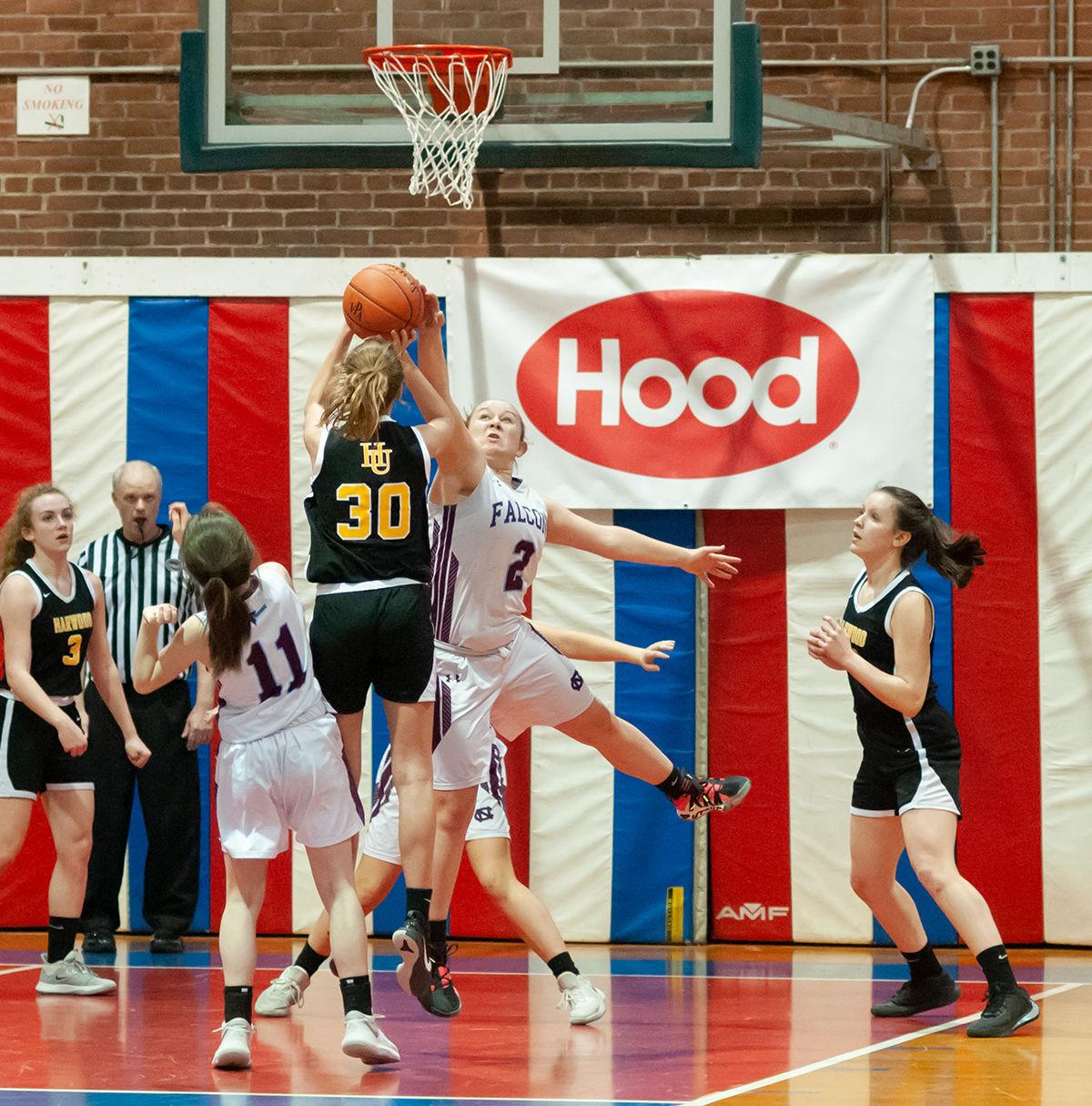 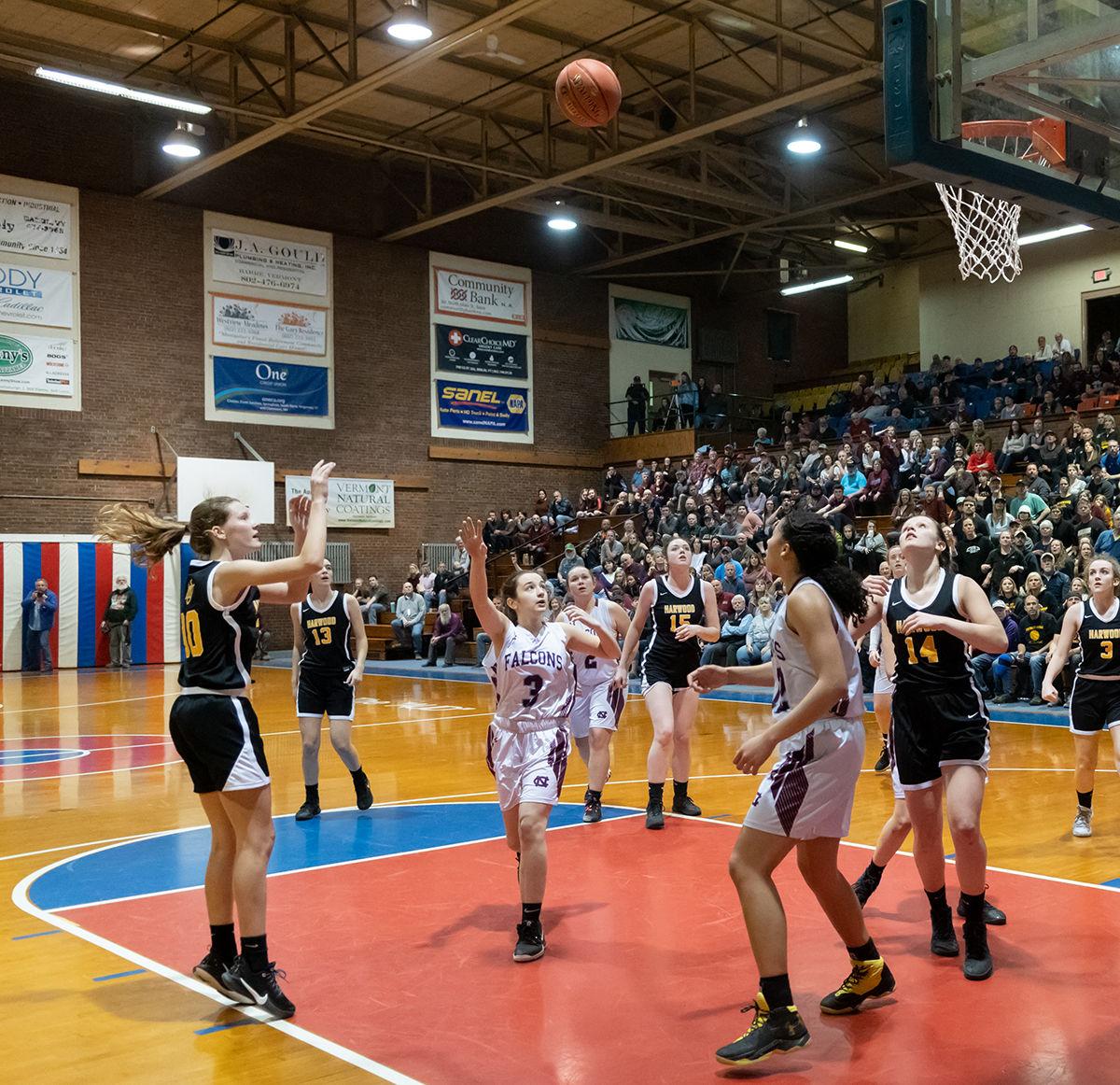 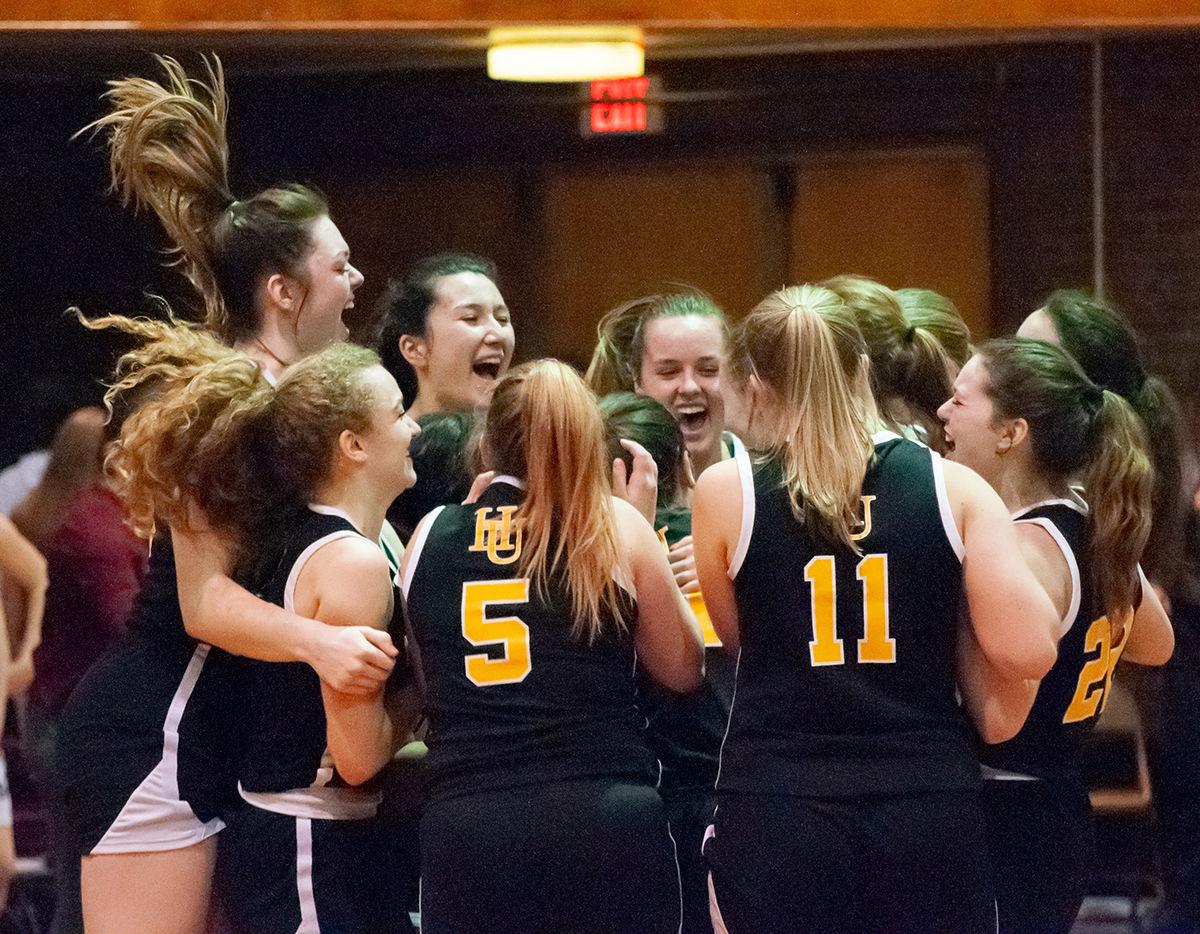 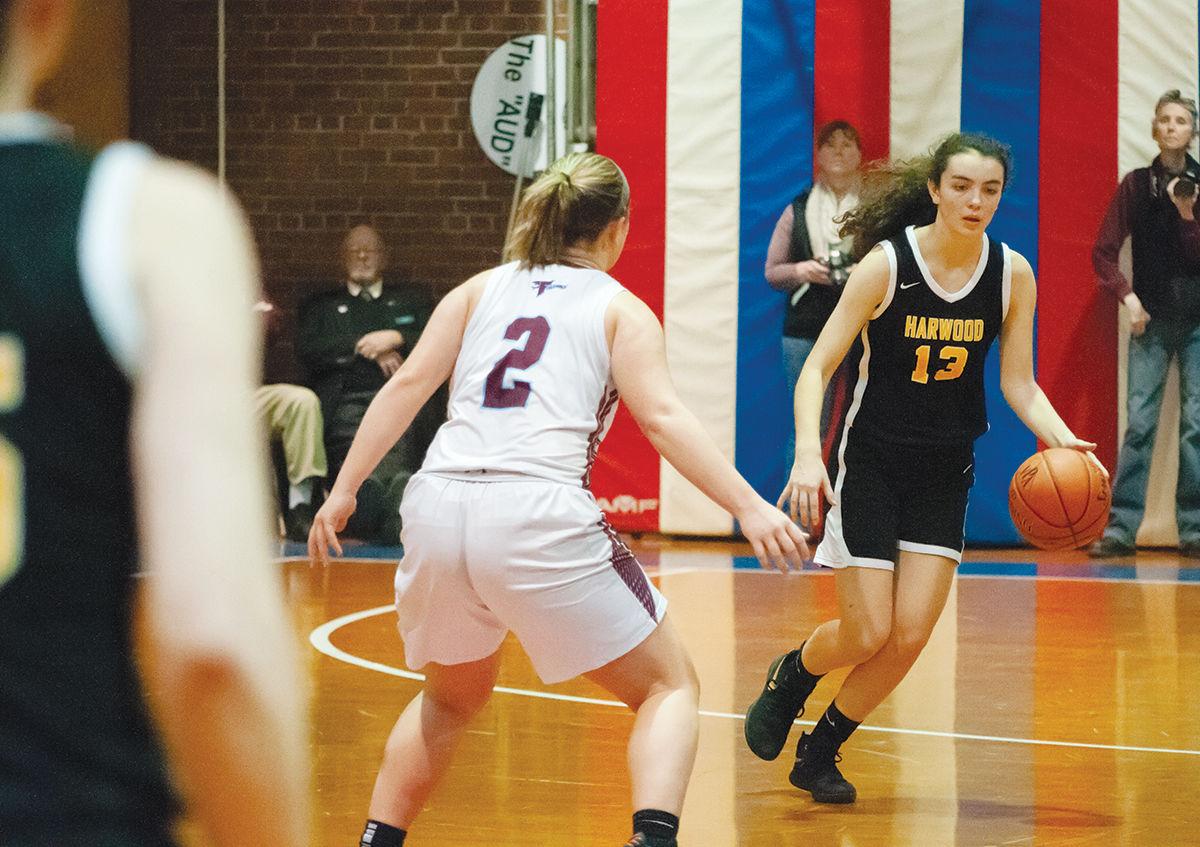 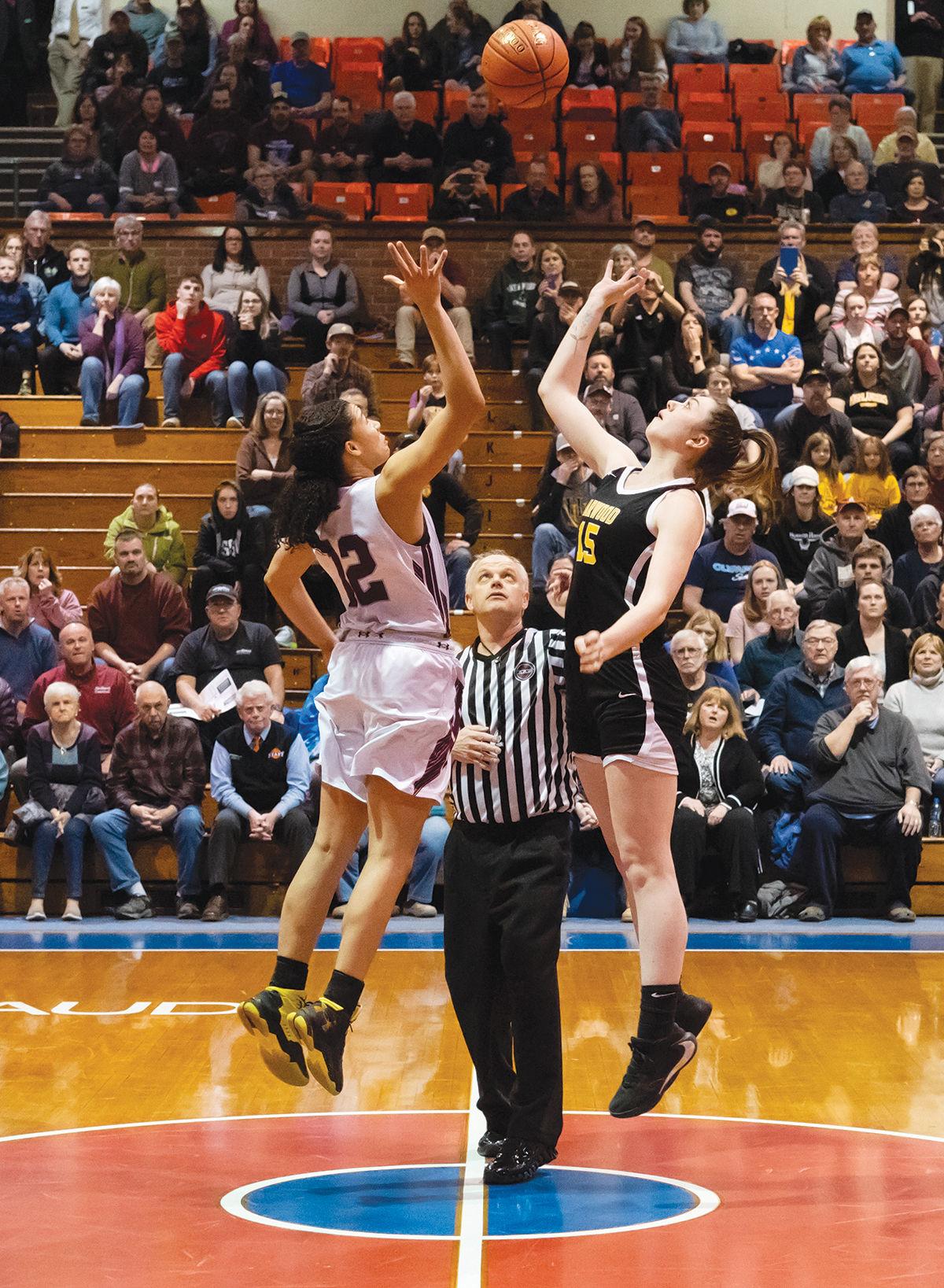 Tanum Nelson scores two of her 21 points in a semifinal win over North Country.

Third-ranked Harwood was supposed to play No. 1 and undefeated Fair Haven in the Division 2 championship game last Saturday, March 14, but coronavirus restrictions canceled the game.

As a result, Harwood and Fair Haven were named co-champions.

To reach the final, Harwood blasted No. 2 North Country 47-27 in the semifinals last Wednesday, earning a shot at the D-2 title for the first time in 40 years.

Tommy Young, the Harwood coach, was ecstatic about what his team has accomplished.

He became the coach four years ago, and his first team went 0-20. The girls on this year’s team were crucial in turning Harwood’s fortunes around, and Young couldn’t be prouder of them.

“This group has been amazing. They keep setting goals,” Young said. “Three years ago, they said they didn’t want to be the worst team, and they did that.

“Last year, they said they wanted to be in position to host a home game, which hadn’t been done in like 20-something years. And they did that.”

This year, they wanted to host two home playoff games, but since a lot of Division 1 teams dropped down into Division 2, he knew the competition would be tougher.

But his players earned the third seed in a stacked D-2 field and now they’re co-state champs.

Young praised the leadership of the four seniors on the team, Kennedy Wimble, Ella Gannon, Ashlyn Carst and Mia Cooper.

Cooper made the senior all-star team Young would have coached — but that game, too, was canceled — and star sophomore Tanum Nelson made the Dream Dozen, the top 12 underclassmen players in the state. “She made that as a sophomore, which is pretty unheard of,” Young said.

And he couldn’t give junior point guard Ashley Proteau enough praise. “She could go out and score 15, 16 points a night, she could rebound, she could play defense. She does whatever we need,” he said, and laughed. “I want to find a way to get her to be a fifth-year senior, but I don’t think they’ll let me.”

The team met the day after their win to talk about the finals, a day before Vermont Gov. Phil Scott banned large public gatherings.

“I think they realized everything that was going down,” Young said. He explained how public safety was key, and then he asked them to think about the game the day before, where they were, what they were feeling.

“They went around the circle and each said their thing,” Young said, “And I said, ‘Girls, that’s a moment that nobody can ever take from you.’”

The season is done and, much like the rest of American life amid the developing coronavirus pandemic, the near future is uncertain. It’s unclear when the team will be able to celebrate the school’s first-ever championship in girls basketball — Harwood had been 0-2 in state title games, losing in both 1979 and 1980.

“I mean, you have no idea what’s going to happen as far as gatherings right now,” Young said. “It could be on hold, but it’s theirs.”

“What I’m really psyched about is, when I went back and watched the game online, my girls are smiling the whole time,” he said about the win over North Country. “No matter what happens from this point on, that’s your moment. It’s yours and you’ll always have that.”

The Harwood girls dominated their semifinal against North Country. Harwood was playing in the hallowed Barre Auditorium for the first time since 1980.

After a low-scoring first quarter ended with Harwood up 7-4, the Highlanders amped up their stifling defense — and that’s where North Country’s chances ended. Harwood led 17-11 at the half, then really clamped down in the third quarter, allowing only two North Country layups while scoring 17 points themselves. Tanum Nelson raced out on several fast breaks and netted four 2-pointers and two foul shots. The result: a 19-point lead going into the last quarter.

North Country tried to rally in the fourth, with McKenna Marsh hitting two 3s and scoring a couple more points, but Nelson was on a tear, scoring eight of Harwood’s 13 points in the final quarter and keeping pace with North Country’s charge.

The crowd went wild, bleachers packed with parents and students, as the girls basketball team earned an appearance in the finals for the first time since 1980.

“I think North Country was surprised by our speed and size,” Young said. “When we’ve beaten teams, they say, ‘Well, we didn’t play particularly well. That’s why we lost.’ I don’t think people realize our defense is part of the reason they don’t shoot well.

“We just got quicker and quicker as the game went on, and we’ve done that a lot in the second half this year,” Young said.

Nelson led all scorers in the game, pouring in 21 points – 18 of them after halftime. Emma Ravelin had 11 points, Ella Gannon had seven and Mia Cooper had six.

In Division 4, Proctor and Mid-Vermont Christian were declared co-champions.

The semifinal games were canceled in Divisions 1 and 3, so four champions were crowned in those divisions.

Lake Region, Thetford, Windsor and Oxbow were declared the co-champions of Division 3.