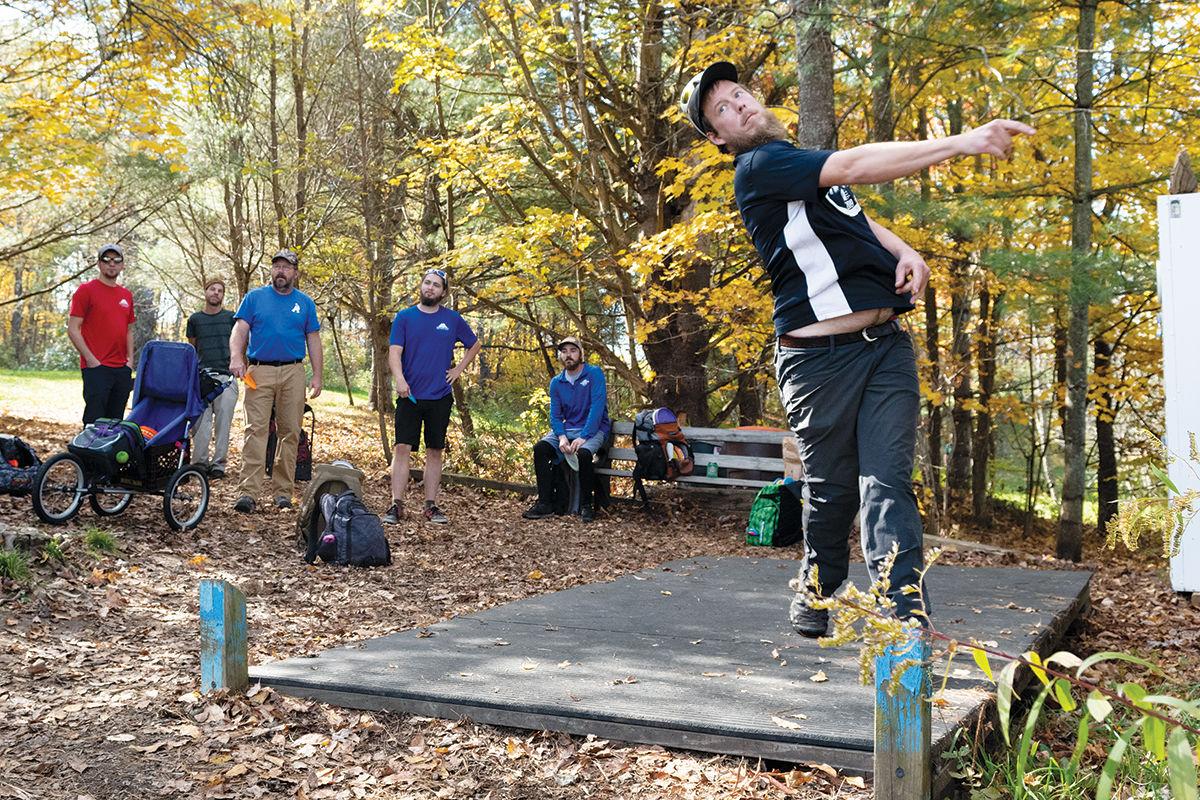 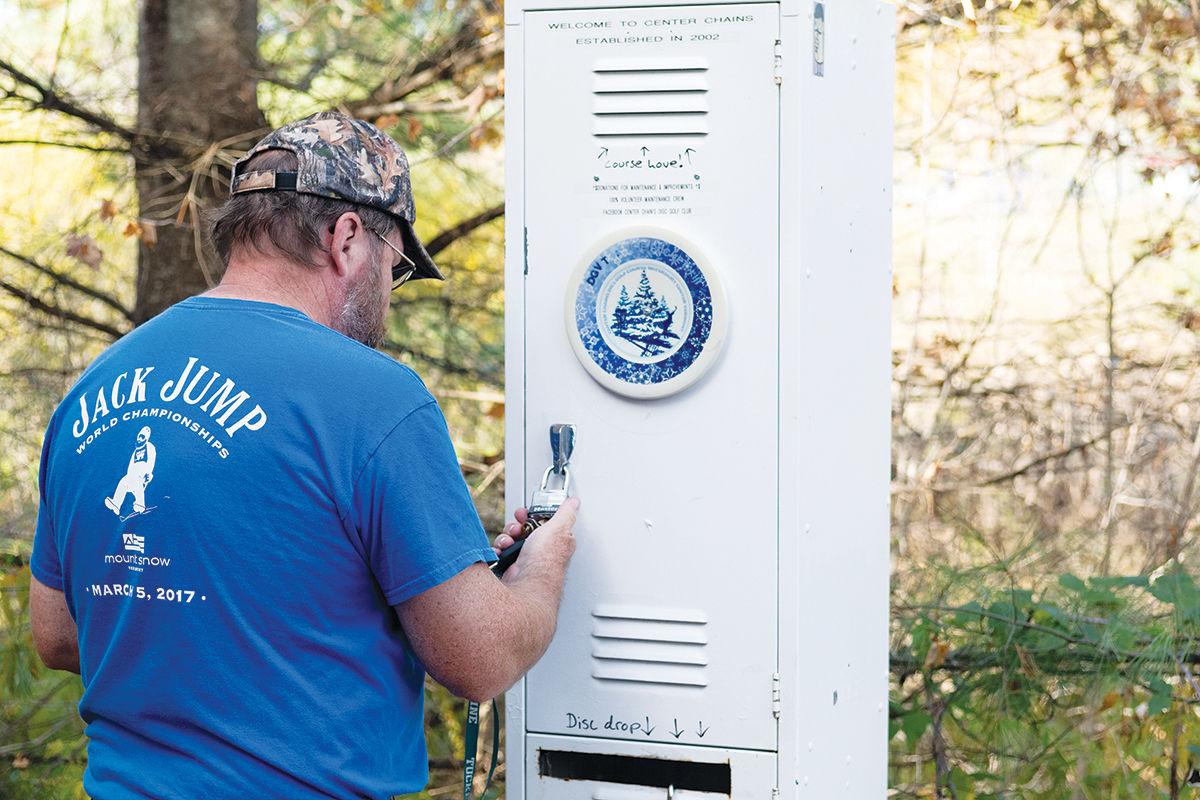 Mark Stirewalt locks the disc return and donations box at Center Chains after emptying it. 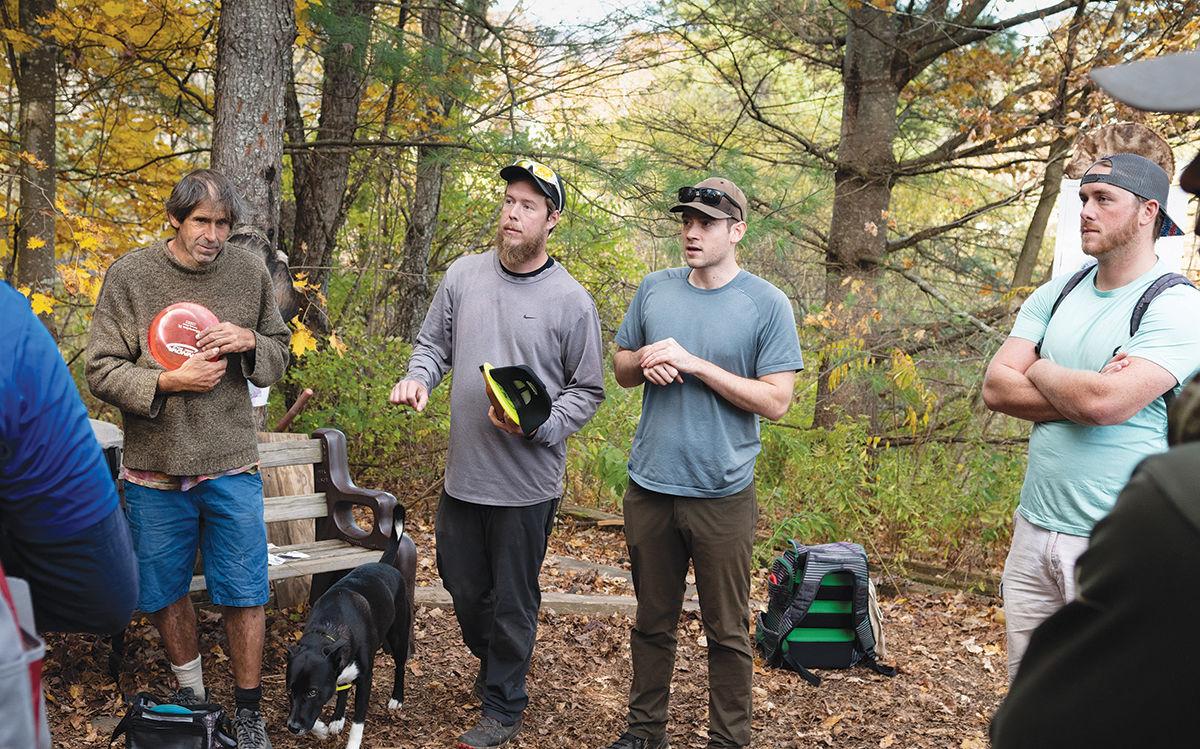 Mark Stirewalt locks the disc return and donations box at Center Chains after emptying it.

One of the worst aspects of disc golf is losing a favored driver.

A golfer stands at the tee pad and visualizes the path the disc will take. The golfer brings the disc behind his back, takes a deep breath, pulls his arm forward and, with a quick snap, sends the disc on its way.

Sometimes things don’t go as planned — the release was early or late, or maybe the disc was tilted askew when it left their hand — and the thing forks off its intended path and sinks into tall grass, weeds, bushes or behind a thick grove of trees and underbrush.

For the uniniated, disc golf is like golf — but played with a Frisbee or similar disc, and the hole is actually a basket attached to a pole. Otherwise, the goal is the same: Get through the course in the fewest possible shots.

Back in 2016 at Center Chains Disc Golf in Waterbury Center, a golfer didn’t have to throw poorly to lose a disc to the weeds and tall grass. The whole thing was a trap.

But, in 2018, UDisc, a popular disc golf tracking application, listed the courses with the most logged plays in each state. Vermont’s result caused a stir because the top course wasn’t nationally renowned Brewster Ridge or Fox Run Meadows at Smugglers’ Notch Resort. No, it was Center Chains in Waterbury Center.

Reviews of Center Chains from as little as three years ago mention overgrown fairways, deep muddy areas, and tee pads in disrepair. Now, the fairways are well groomed, bridges run above the wettest areas, and many of the tee pads are supported by level, sturdy structures.

All these changes were made by volunteers, who made their home course one of the best in Vermont.

“The course needed a facelift and some new life. We had extra time and motivation to put time and effort into the course,” said Clayton Davis of Stowe, an avid disc golfer. “I spent countless hours as a kid over on the course. Just biking around being a kid, not knowing that disc golf existed.”

When he was in high school, Davis and his friends bought some discs and tried the sport, and he was hooked. He now plays in the professional bracket at tournaments sanctioned by the Professional Disc Golf Association.

In the early spring of 2016, Davis attended a cleanup day at Center Chains in preparation for the annual Sap Bucket Open Tournament. Davis decided to keep at it throughout the season.

“It was unplayable from late May, early June till September or October. The grass was overwhelming and you’d lose your disk in the fairway,” Davis said.

Davis asked Bill Woodruff, Waterbury’s public works director, if it was all right for him to work on the course. Woodruff approved and the work began.

“It was me with a weed wacker. I almost mowed the whole course like that,” Davis said.

Other regular golfers noticed the improvement and pitched in. Taylor Douglass, a Waterbury local, took turns with the brush cutter in 2016, and in 2018 invested in a Dixie Chopper ride-on mower that had survived the 2011 flood.

Douglass took charge of the disc return this year, contacting each number scrawled on the back of the discs that find their way to the box.

Late in the summer of 2017, Mark Stirewalt, a longtime Waterbury resident but a new disc golfer, saw Davis cutting brush. Stirewalt asked him if he worked for the town, “the same question I always get asked,” Davis said. But Davis was way out there, much farther than a new golfer could throw.

“I joked to him and said, ‘Hey, can you mow over here?’” Stirewalt said, and Davis responded, “Throw where you mow.” The two talked and Stirewalt asked how he could help. He soon became another core member of the volunteer crew, helping to mow and to patch wet areas with wood chips he acquired from local Forest Service refuse.

Stirewalt plays the role of treasurer for the volunteer effort, keeping records of donations and expenditures.

Laboring in the hot sun and humid air, this team covered the whole 18. While Davis tackled the heavier growth with his brush cutter, Stirewalt used his push-mower to hit spots Douglass couldn’t reach with the ride-on.

They put Center Chains into better shape than some courses that charge golfers to play.

They took this job a step further last winter, trying to make the course playable all season long.

“We rigged up a groomer, essentially, behind a snowmobile and dragged it around out here on the more open fairways,” Douglass said, “to dense-pack it enough so you don’t just punch through and lose your disc.”

Others have joined up for the course’s renewal, contributing where they can. The crew mentioned notable efforts from Dave Rockwood, Jordan Lamson, Troy Thayer, Michael Chadwick-Smith and Dave Frothingham that helped get the course where it is today.

The crew started looking at ways they could improve the course once the growth was kept at bay. “We established a mow cycle and then we decided we had to step it up,” Davis said.

They started building tee pads using rubber mats and whatever lumber they could find on a tight budget.

“That basically covered the rest of what we needed,” Davis said. Davis talked to Woodruff, who gave him the OK to start building tee pads and bridges for the swamped areas of the course.

“I approached (Woodruff) again and he said, ‘I love what you’re doing out here,’” Davis said.

The next step was a workday, much like the one back in early spring of 2016, but on a much bigger scale. Major improvements were the goal.

In March, about 25 people showed up to help build tee pads, create and replace bridges, add a detour around a steep, eroding path, replace rotting cribbage, and clear sticks and brush to get ready for the spring golf season.

“It was an incredible symphony of different lifestyles working together,” Stirewalt said.

With these improvements, Center Chains went from a place best avoided in the thick of summer to a thriving, popular course.

“Since we took over three, four years ago, the numbers of people out there day to day has skyrocketed,” Davis said.

Center Chains hosts a pickup league during the disc golf season — Sundays at 10 a.m. and Mondays at 5 p.m. — and its popularity has surged, Davis said.

“Prior, it was a struggle to get enough people to even call it a league,” he said. “This year we had a couple of weeks when we had 25 or 30 people.

“To play with these people, who are excited and pumped about the work we’re doing, is a good feeling,” Davis said.

There are plans to improve the course further. Davis, Douglass and Stirewalt want to improve the intermediate and expert tees next, making the course more suitable for both recreational and highly competitive players.

Douglass hosted a fundraiser game on Nov. 2, and raised $120 to build a demo intermediate tee pad.

“I’m putting one out so people can play from it, even though there’s some snow out there,” he said. Douglass intends to launch another GoFundMe this winter to raise $2,000 for the other 17, and he plans to do a lot more next season.

“I’m definitely going to be doing two or three (fundraisers) next year and go bigger with what we’re doing,” Douglass said. “I’m going to focus on Waterbury more than playing in every tournament in Vermont.”

One of his ideas is a “free tournament for a free course,” charging no entry fee and relying on good will to provide winner payouts and raise money. Players could donate prizes, money, or their time on course maintenance.

“If you contribute in some capacity to help grow the course, you’re in,” Douglass said.

Davis said he would like to buy nine additional baskets to add more variety to Center Chains’ 18 holes, which would cost about $4,000.

The crew made about $560 from its donation box this year, but a price tag like that would require more funding.

“I haven’t approached (the town) on the future ... but that will be coming, definitely by next year,” Davis said.