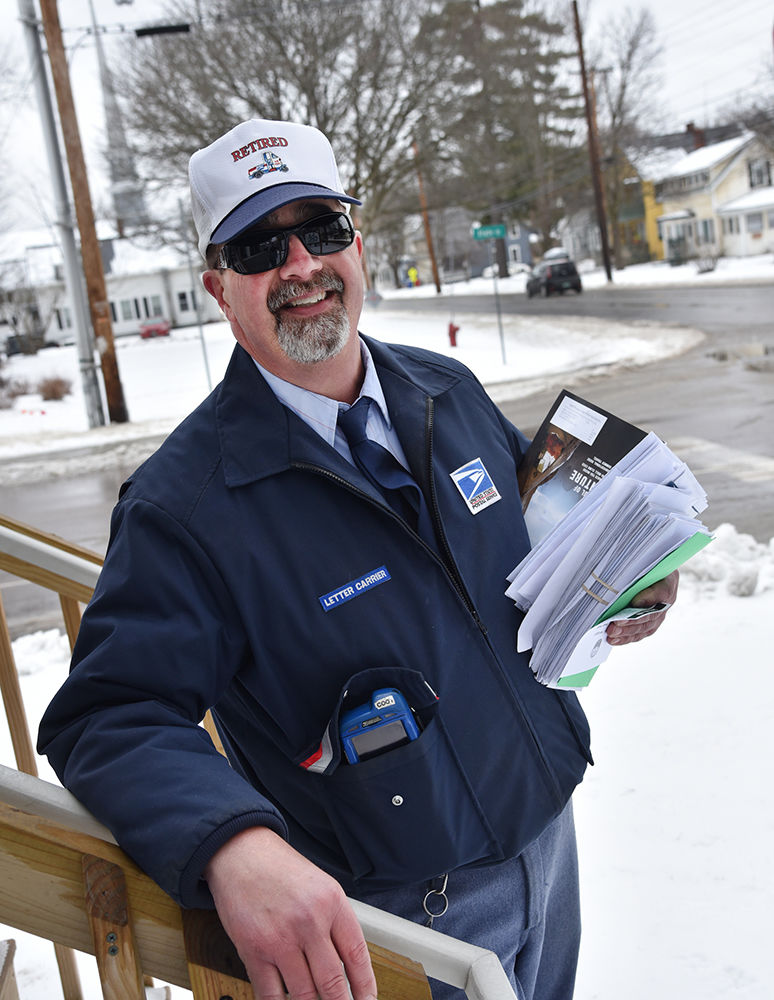 Tony “The Mailman” Cote on his Waterbury Village postal route. After 27 years, he’ll hang up his canvas sack on April 27 and celebrate with friends and customers at a potluck celebration at the Waterbury Senior Center. 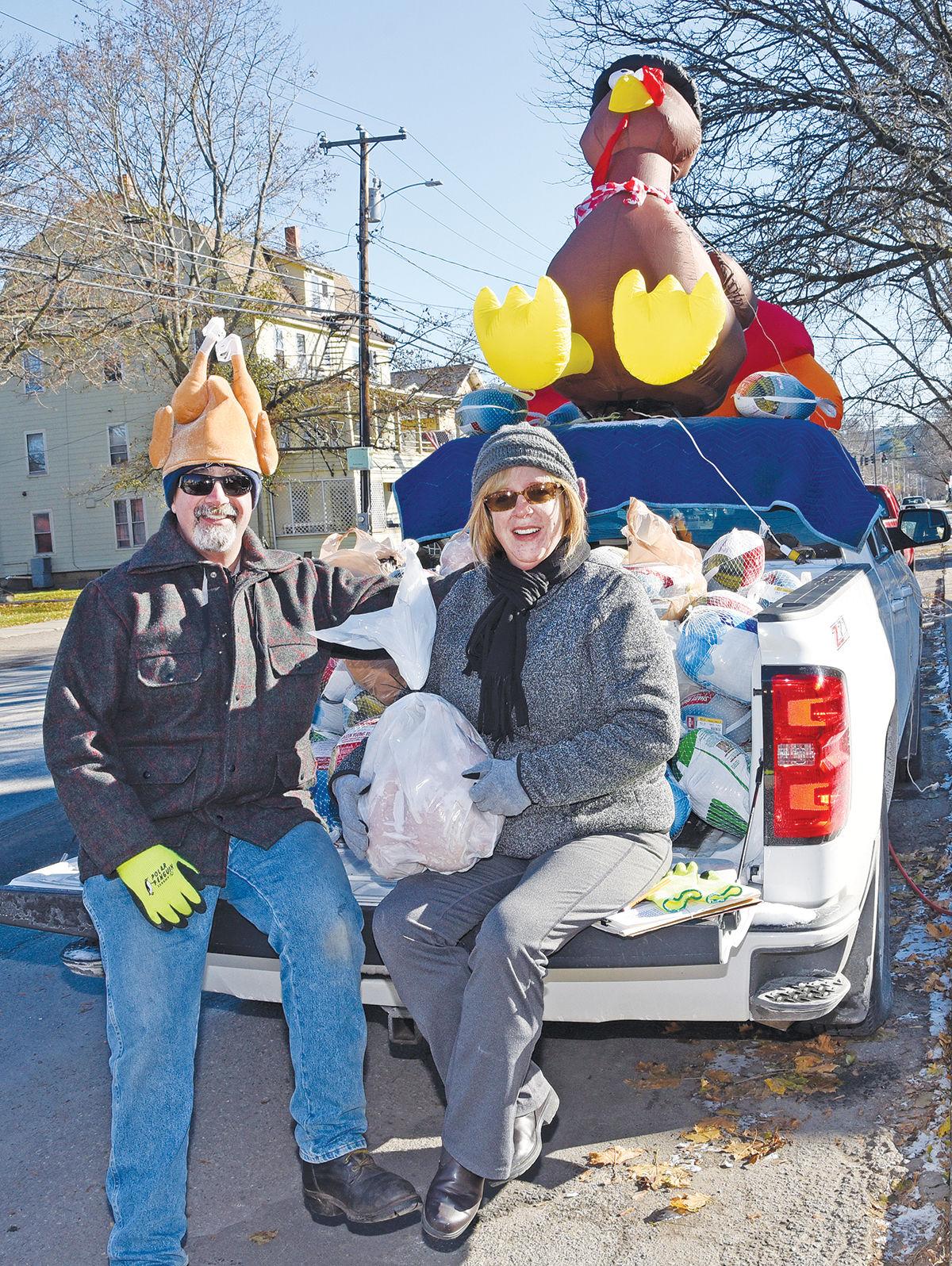 Tony “The Mailman” Cote and Kia Commo collected more than 100 turkeys and a pile of cash donations in their annual drive, which they’ve been doing for a decade. 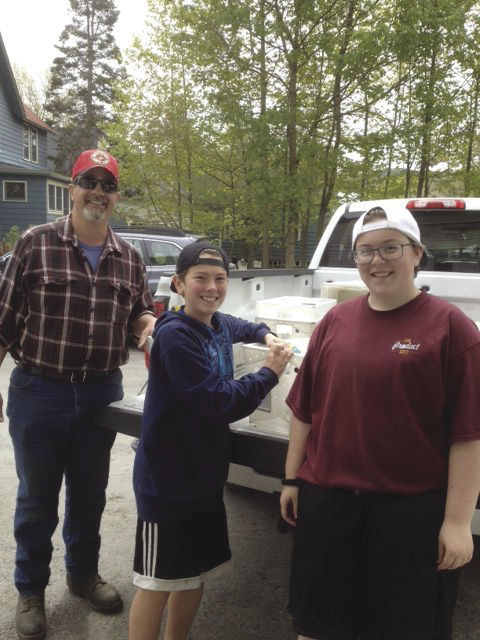 On Saturday, May 13, the mail carriers in Waterbury collected 700 pounds of food for the Waterbury Area Food Shelf in the annual Fill a Bag, Help Feed Families drive. Tony “The Mailman” Cote coordinated the effort in Waterbury and was helped by Jonathan Deslaurier and Morgan Chapin, grandchildren of Cathy Deslaurier, a Food Shelf volunteer, and volunteers helped to unload the donations from the community. 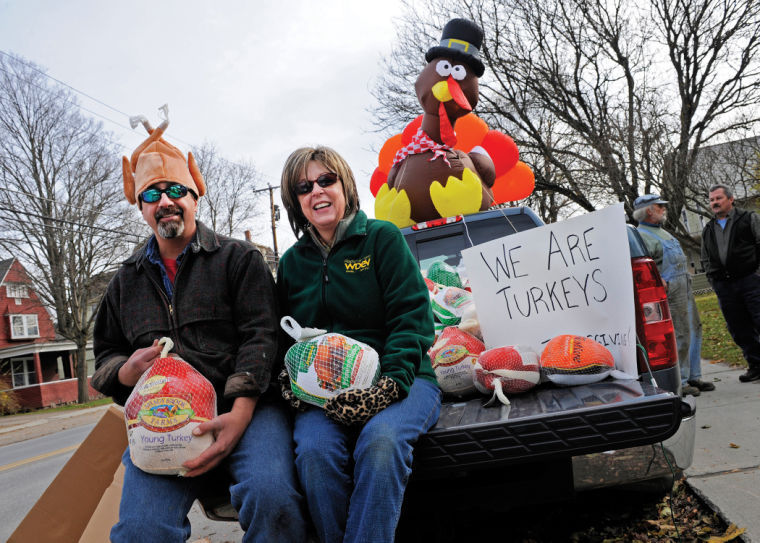 Tony “The Mailman” Cote on his Waterbury Village postal route. After 27 years, he’ll hang up his canvas sack on April 27 and celebrate with friends and customers at a potluck celebration at the Waterbury Senior Center.

Tony “The Mailman” Cote and Kia Commo collected more than 100 turkeys and a pile of cash donations in their annual drive, which they’ve been doing for a decade.

On Saturday, May 13, the mail carriers in Waterbury collected 700 pounds of food for the Waterbury Area Food Shelf in the annual Fill a Bag, Help Feed Families drive. Tony “The Mailman” Cote coordinated the effort in Waterbury and was helped by Jonathan Deslaurier and Morgan Chapin, grandchildren of Cathy Deslaurier, a Food Shelf volunteer, and volunteers helped to unload the donations from the community.

For 27 years, his feet pounded out the same steady beat on the concrete, eight miles a day with a messenger bag slung over his shoulder, and a stack of newspapers tucked tightly under one arm.

For years before that, he walked a different route.

Wind, rain, hail or snow, the U.S. mail still had to go, and for Waterbury Village, Tony “The Mailman” Cote was always there, head bent low, moving forward.

With his 57 years catching up to him, knees aching and back in pain, next week Cote will walk his last mail route, ending in a celebratory potluck dinner at the Waterbury Senior Center at 4 p.m. on April 27.

Over the years, Cote has watched families grow and change with a friendly handshake or wave as he dropped off the day’s letters, bills and catalogs.

The saddest part about being a mail carrier is the friends he’s made who’ve died or left along the way.

Now that first generation of kids, in its mid-20s or so — just babies when he started his route — is returning to town.

Having watched them grow up from the sidewalk, “It’s strange to see ‘em now,” Cote said. “At this point, I’ve made a complete circle. I probably know less people in town now than at the height of my career, and the new people in Waterbury are a different breed. Some won’t even get to know me. I’m just the mail carrier to them.”

The mail that they receive and send has changed a lot too.

When Cote started his mail route, letters were sorted in a 2-foot tray, and around Christmas time, each tray would hold a sea of red and green holiday cards. The same used to happen around Easter and Mother’s Day. Now, he’s lucky if he sees a handful of colored greeting card envelopes.

To send a letter from Morristown — Cote’s hometown — to Waterbury, for example, it will take two days for first-class parcels, because they are trucked to a New Hampshire sorting facility and back, rather than just the 18 miles from one town to the other.

Folks today need a lot more packages delivered too — many stamped with that telltale Amazon smile.

Every morning the Waterbury post office is packed with enough boxes to fill the room from floor to ceiling.

For the boxes, because they’d be a challenge to carry on his route, Cote makes an exception and drives the truck, but only about two miles a day.

“If I was a betting man, I’d bet in the next five years or less, we’ll see a drastic change in the postal service,” Cote said. “It’s frustrating to see this iconic job dumped down the tubes.”

A lifetime of service

Cote entered the postal service after his four-year stint in the U.S. Marine Corps, because postal work was the going job back then, and it offered a decent retirement plan if you were willing to put in your time.

He worked for a few years as a letter carrier in Orlando, Fla., before returning to Vermont, and he’s never worked anywhere else.

Today, he can’t imagine anyone staying in the same job for three decades.

During that time, he’s been able to use his position to give back to the community. Cote initiated the National Association of Mail Carriers “Stamp Out Hunger” Food Drive in Waterbury, assuming all responsibility for the publicity of the event and delivery to the food shelf.

To boost donations that first year, during the 2004 World Series, Tony challenged one of his customers to a bet. If the Red Sox won, David Peterson would have to shave off his beard.

Peterson’s family had never seen him without facial hair, and when the Red Sox won their first World Series in 86 years, Cote charged admission to the beard shaving.

“Each audience member would have to make a monetary donation or give a nonperishable food item to the food shelf.”

Cote collected $187 and several boxes of food, and the event was aired on WCAX.

Cote helped collect turkeys for the Thanksgiving drive as well, taking in 120 birds on average and $1,500 in donations.

Cote now plans to take life day by day with his longtime partner Sheila Tarbox, his three children and three grandchildren. And he’ll finally have time to focus on his antique and classic cars, fixing up his 1938 Chevy street rod, 1957 Pontiac and 1975 Chevy Impala.

And, food lovers will be heartened to know that Cote will continue to bring his homemade barbecue truck to Waterbury’s Rusty Parker Park concert series and Morrisville’s Oxbow Park music series in the summer.

Thanksgiving in Waterbury won’t be the same next year. The successful duo of Tony “The Mailman” Cote and Kia Commo are passing along their tur…