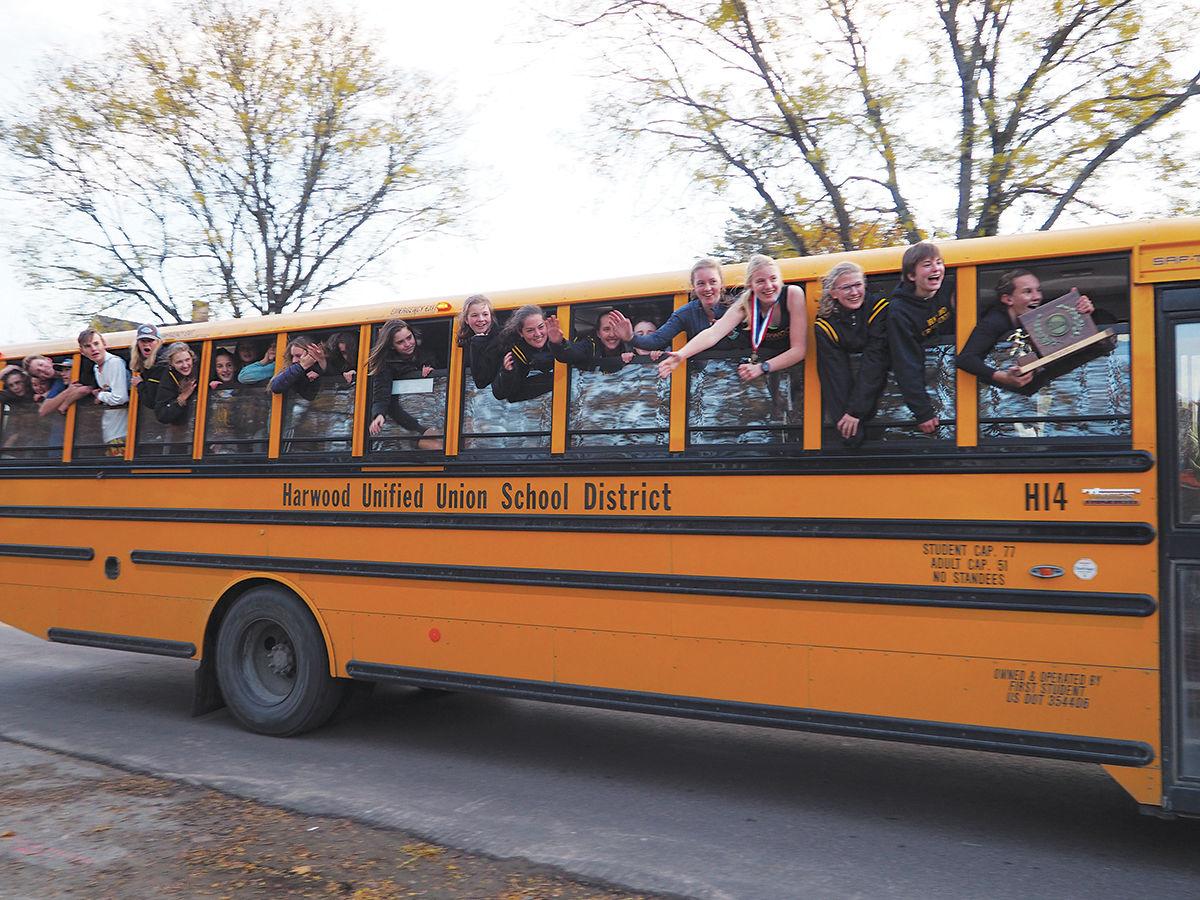 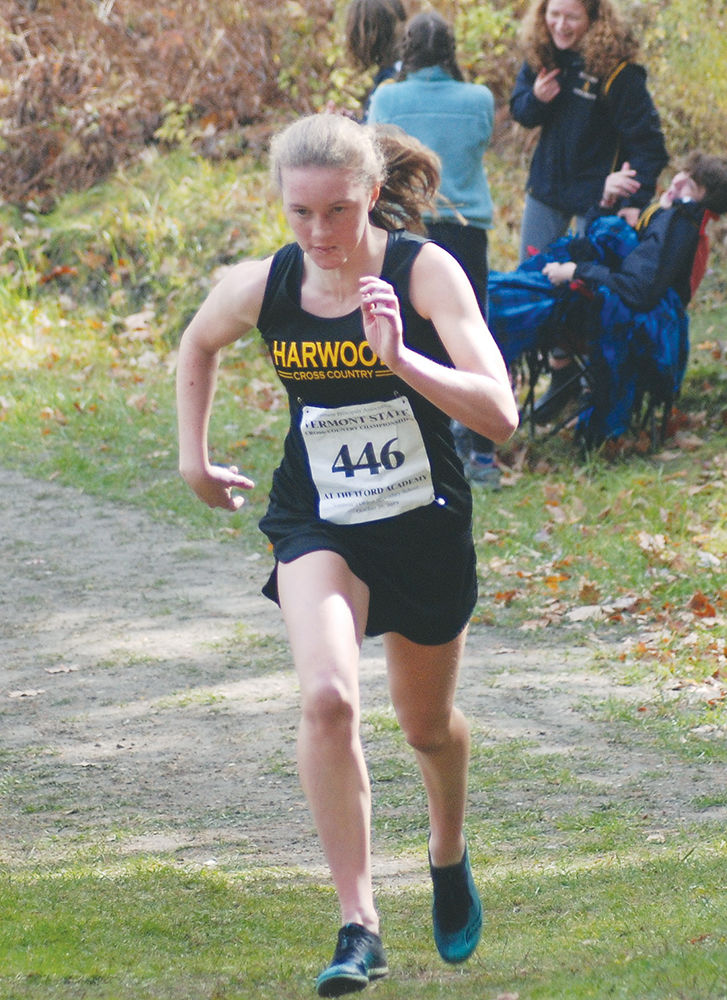 Ava Thurston set a blistering pace to claim the individual Div. 2 state title for the second year in a row. 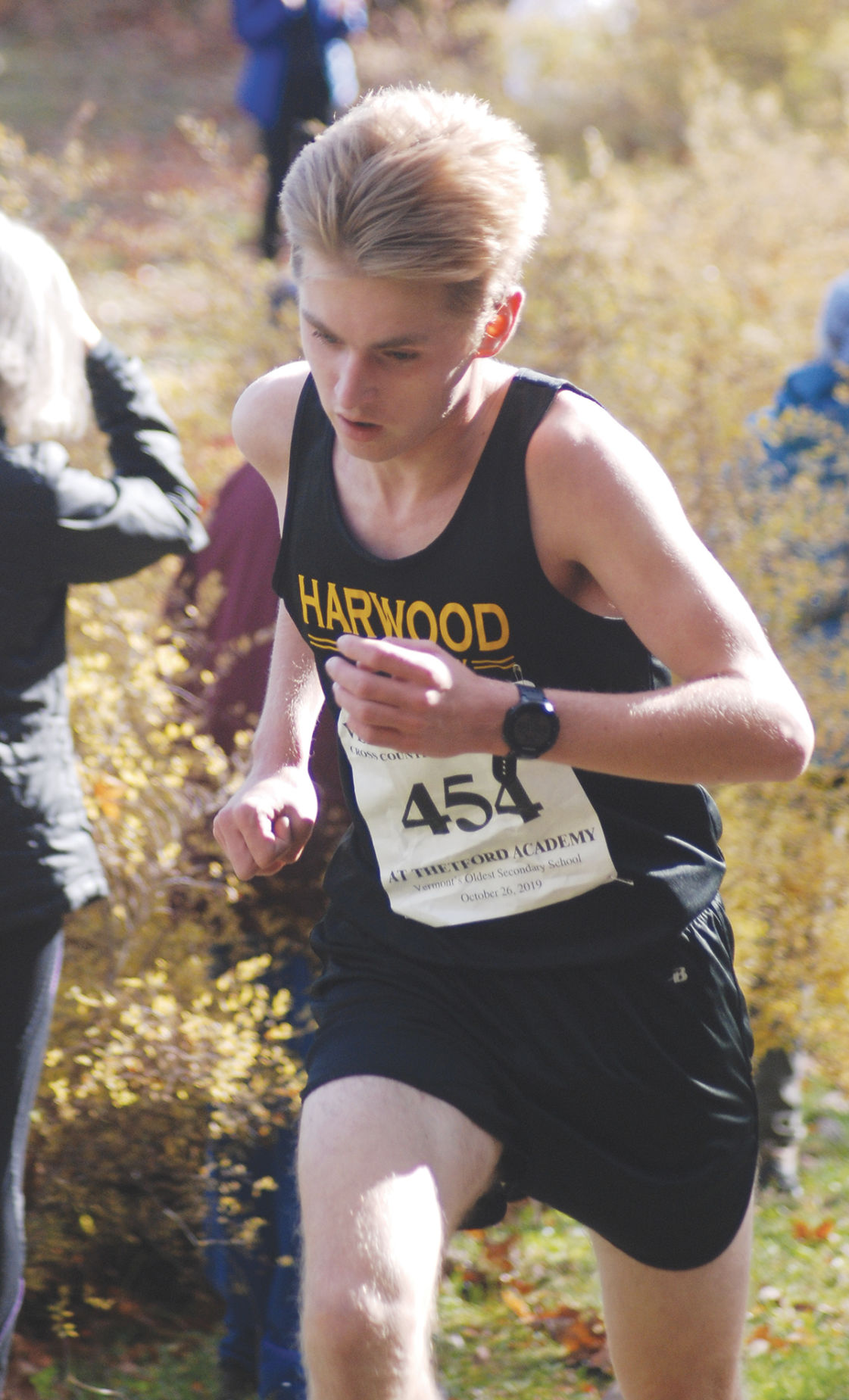 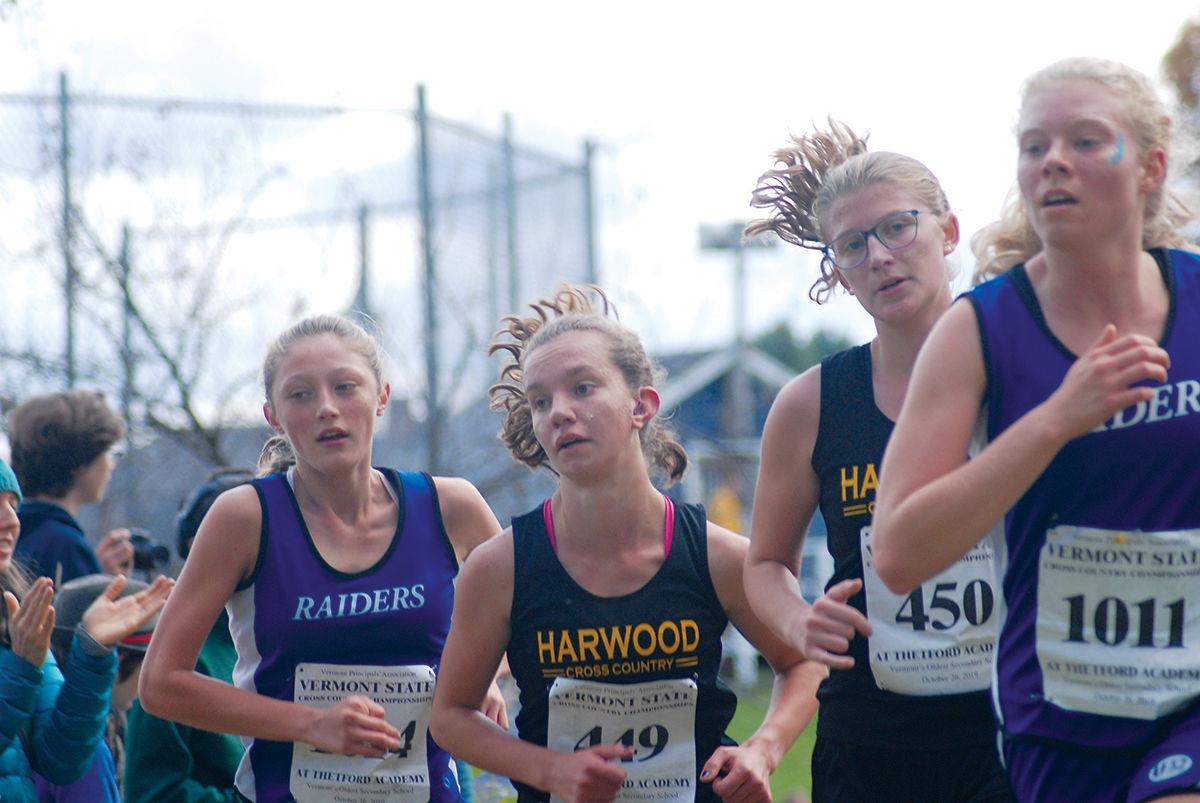 Ava Thurston set a blistering pace to claim the individual Div. 2 state title for the second year in a row.

The Harwood girls have now claimed 10 of the last 11 Division 2 state championships.

The state championship meets for Divisions 1, 2 and 3 were all held on the hilly course at Thetford Academy on Saturday, Oct. 26.

“It was a little bit of a surprise; we beat U-32 pretty soundly,” Harwood coach John Kerrigan said.

The Harwood girls and U-32, the only other team to claim the D-2 crown in over a decade, were expected to run neck-and-neck for the 2019 state title, but the Highlanders won going away, with 40 points to U-32’s 53.

Thurston crossed the finish line in 19:19.9 to beat runner-up MegAnne Gilmore of Lamoille by nearly a minute. Gilmore finished in 20:14.6, her teammate Maggie McGee was third in 20:39.9, U-32’s May Lamb was fourth and Missisquoi’s Ruth Brueckner rounded out the top five.

Thurston’s teammate and fellow sophomore Britta Zetterstrom lost a footrace to Brueckner for fifth, finishing one-tenth of a second back in sixth with a time of 20:53.5. Freshman Charlie Flint finished 10th for the Harwood girls in 21:29.7, senior captain Julianne Young was 11th in 21:32.9 and sophomore Caelyn McDonough was the final scoring member of the squad, finishing 12th in 21:39.8. The final two runners for Harwood, freshmen Jill Rundle and Anlu Thamm, finished in 17th and 20th, respectively.

That result was a bit surprising to Kerrigan, especially since U-32 “pretty soundly beat us at their place” during the regular season. And, three of Kerrigan’s top seven runners had never seen the tough course at Thetford, or run in a state championship meet.

“It was a new course for them, and they were a little nervous, but they came through with flying colors,” Kerrigan said.

Most squads get a preview of the course at Thetford’s annual Woods Run earlier in the season, but Harwood competes out of state that weekend, so the freshmen were going in blind until Julianne Young suggested the team run a practice at Thetford the Tuesday before the state championship race.

“The girls were able to familiarize themselves with the layout … while running a relaxed pace. It was a very wise decision by Julianne,” Kerrigan said.

He gives a great deal of credit to Young, his only senior, for the win, and the season, even though she battled injuries all year.

“She got the girls running all summer,” Kerrigan said, really helping to prepare the freshmen runners for the season. “She’s the heart and soul of the team. She wanted this more for them than for herself.”

He wasn’t sure his captain would even be able to run the state championship meet because of her injuries.

“She did the best she could,” Kerrigan said. “The pain really hurt on the downhills, so she really pushed it on the uphill sections. It was a good effort. The girls really wanted it for Julianne; they really wanted her to have that victory, and she wanted it for them.”

Thurston’s time was the fastest of the day in any division, and 14 seconds faster than Division 1 champ Alicia Veronneau of Champlain Valley Union. Thurston was dominant all season, but Gilmore challenged her in the early going of the championship race.

Thurston “ran neck-and-neck with MegAnne for almost 2 miles,” Kerrigan said, but pulled away after that and won by nearly a minute.

“If she’d had someone else pushing her for the rest of the way, I think she could have gone even faster, but she ran alone that last mile,” Kerrigan said.

As good as Thurston was, her teammates had to step up to win another championship, and they did. Zetterstrom edged out two U-32 runners to finish sixth and Flint, Young and McDonough finished in a pack together ahead of U-32’s fourth runner.

“We knew U-32 had a pack of three runners” likely to finish in the top 10, Kerrigan said. The plan was to have three Highlanders finish between U-32’s third and fourth runners, and they did.

“If we did that, we thought we could win,” he said.

“Jill passed their fifth girl, and that gave us some insurance,” Kerrigan said. “I thought it would be closer. U-32 ran strong; we just had a great day.”

Thurston, Zetterstrom and Flint not only won state titles but also all qualified for the New England Championships as individuals. And, Harwood finished as the second-best team in any division across Vermont behind only D-1 champ Champlain Valley, also qualifying the team for the New England Championships in Manchester, Conn., on Saturday, Nov. 9.

The Harwood boys cross-country team finished fifth at the D-2 meet at Thetford. Led by Carlton Cummiskey, who finished eighth overall with a time of 18:00.3, the Highlanders accrued 124 points, just behind Spaulding’s 122.

U-32’s Waylon Kurts won the boys race in 16:50 and his team won the team championship with 20 points, blowing away the field. Woodstock was second with 95 points and Middlebury third with 106.

Cummiskey’s eighth-place finish qualified him for the New Englands in Manchester, Conn., Nov. 9.

The Highlanders fell in OT just as this paper went to press. Middlebury will play Stowe Nov. 2 in the D-2 championship.