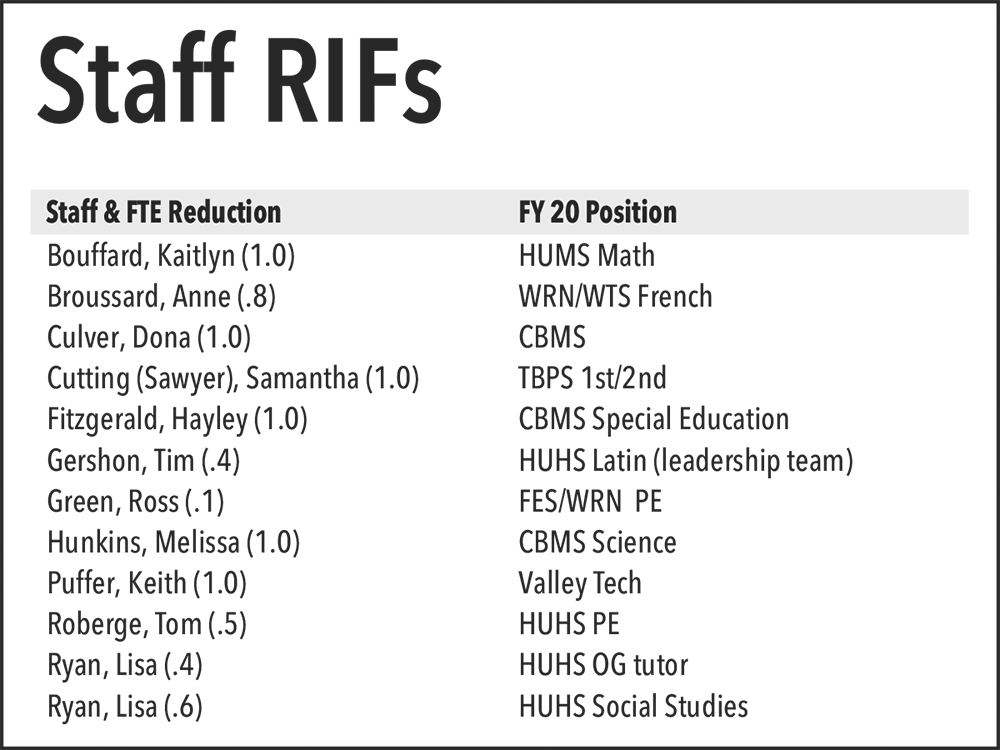 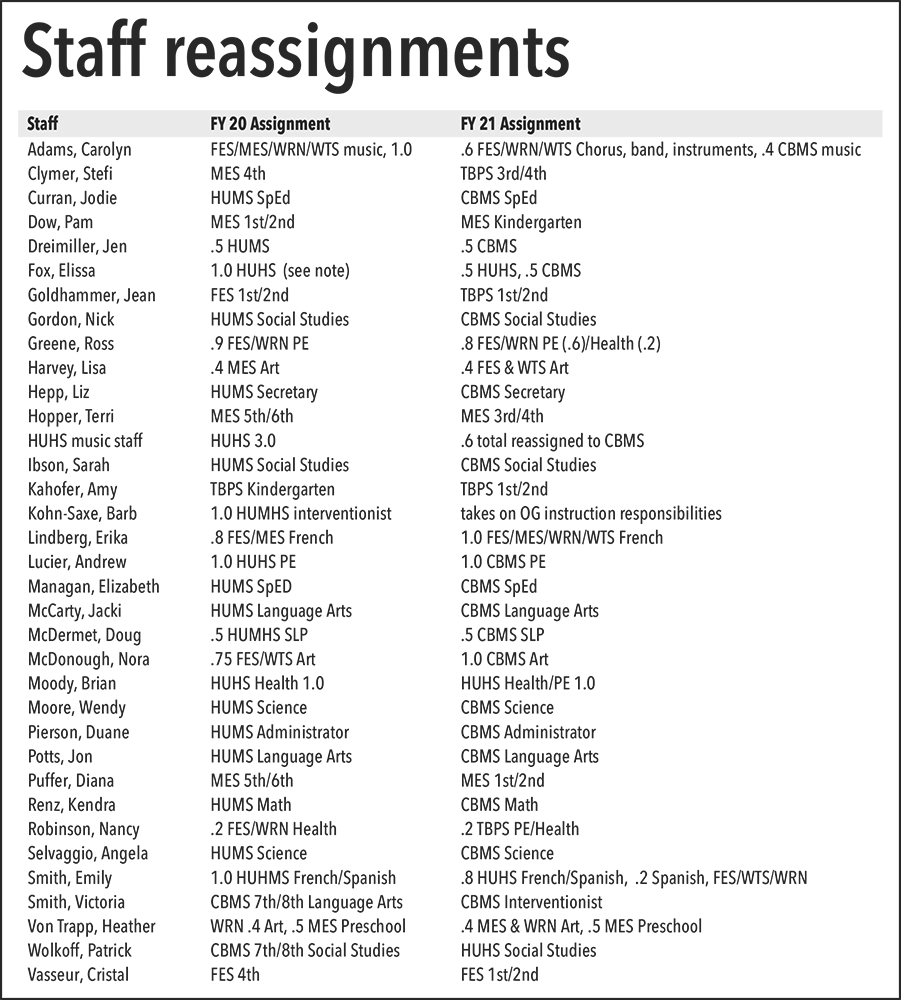 Harwood school administrators revised their list of staff members who are expected to lose their jobs or be reassigned, two days after teachers and their supporters held a forum to express their opposition to plans to rearrange schools.

On Friday, Feb. 21, Superintendent Brigid Nease issued a message that revised the number of teachers who have received reduction-in-force notices, or who will be reassigned to a school or class that is different from where they currently work.

Among the changes, high school art teacher Nathaniel Furlong is no longer among the staff receiving a RIF notice; ditto for high school English teacher Paul Cramer, who teaches in the high school’s alternative program.

Bonnie Flanagan, secretary at Thatcher Brook Primary School, is no longer on the RIF list; but added to the list is Crossett Brook Middle School secretary Dona Culver.

The changes stem from the budget proposed by the school board, which calls for the merger of seventh- and eighth-graders from Harwood Middle to Crossett Brook, as well as changing Moretown Elementary from a K-6 school to a K-4 school. The move is expected to save $1,015,000, allowing the board to propose a budget for the 2020-21 school year with a 2.1 percent increase, far less than earlier budget drafts that had increases as high as 4.9 percent.

To meet or not to meet?

The revised numbers came two days after what was to be a regularly scheduled meeting of the Harwood school board.

However, on Monday night — two days before the meeting and one day before the initial RIF and reassignment lists were made public — the board canceled the meeting.

The cancellation drew the ire of some residents and of members of the Harwood teacher’ union, which elected to hold its own meeting at the same time and location where the board had been scheduled to meet.

“I had made the call to cancel the meeting out of practical concerns about board member attendance and the lack of urgency of the items already scheduled, all of which pertained to work to take place after Town Meeting Day,” said Caitlin Hollister, the school board chair. “I appreciate that the cancellation has been interpreted differently and for that, I am deeply sorry. I know we will continue to welcome teacher voices in the boardroom.

“I was surprised to hear that only a couple of HUUSD teachers spoke on Feb. 19 at the union's event,” Hollister said. “I hope our constituents have seen from our work throughout the past 12 months that until last week, we have actually added meetings, extended time for public comment and Q & A, and invited teachers, staff and families to share input. We will continue to do so.

“We certainly do not shy away from tough conversations or critical feedback and are always willing to engage with faculty and employees.”

The Feb. 19 meeting drew a capacity crowd to Harwood’s library, and included remarks from more than a couple of teachers.

“We felt that was a lost opportunity,” said Greg Shepler, high school social studies teacher and co-chair of the 260-member Harwood Unified Teachers Association, referring to cancellation of the school board meeting. “Our staff was quite bothered by that sudden change.”

Among the speakers was Sarah Page, who retired in 2010 after teaching at Harwood for 30 years. Looking out on the crowd, she saw “about 40 of my former students, and another 10 who went bald.”

“I’m strangely free from the constraints the faculty is under,” Paige said. “It’s hard to be in this district as a faculty member and feel you can speak freely and without suffering the consequences of speaking freely.”

Paige went on to call for “new leadership at the very top of this district” and said she planned to vote against the proposed budget.

Alex Rawson, who has taught science at the high school for the past four years, suggested the board and administration should pay more attention to how their decisions are affecting classroom teachers.

“The one thing you don’t want in a community is a priority based on a number or a sheet or a piece of paper, rather than the person in the room,” Rawson said.

Peter Langella of Moretown, who resigned from the school board in August 2018, “because I knew the process was broken back then,” said teachers and residents might have to resort to extraordinary measures.

He’s working with the Vermont Coalition for Community Schools, which tried and failed to get petitions on the ballot to give voters more authority over school-closings.

“We might need to have a public referendum on the superintendent to call for her resignation,” Langella said.

“We might need to have a public referendum to call for the board’s resignation and start again with new people,” Langella continued. “In our individual towns, we might need to go through the process that is given to us in the articles of agreement to withdraw ourselves from the district and just dissolve the whole thing.

While the board meeting was canceled, there was board representation at the forum by way of Carlton Cummiskey, a junior at Harwood who’s a student representative to the board.

Cummiskey began by noting the budget pressures the board was facing when it made decisions about middle school students and about the fifth- and sixth-graders at Moretown Elementary.

“It’s important to realize that nobody wanted to let these teachers go,” Cummiskey said, while deflecting blame to school administrators.

“The admin team, not the board, decided who would be RIFed,” he said.

Michael Hock of Waitsfield, who until December was director of educational assessment for the Vermont Agency of Education, also suggested the board was not to blame, but instead he criticized Act 46, the law that compelled Harwood to merge from a supervisory union into a district, which he referred to as “a travesty of legislation.”

“It is unfair to lay this problem on the board,” Hock said. “There are some good ones. There are some bad ones. The board was given a job to do that was not defined and there was no precedent for what to do. This law came about because we were bribed, we were threatened, we were lied to.”