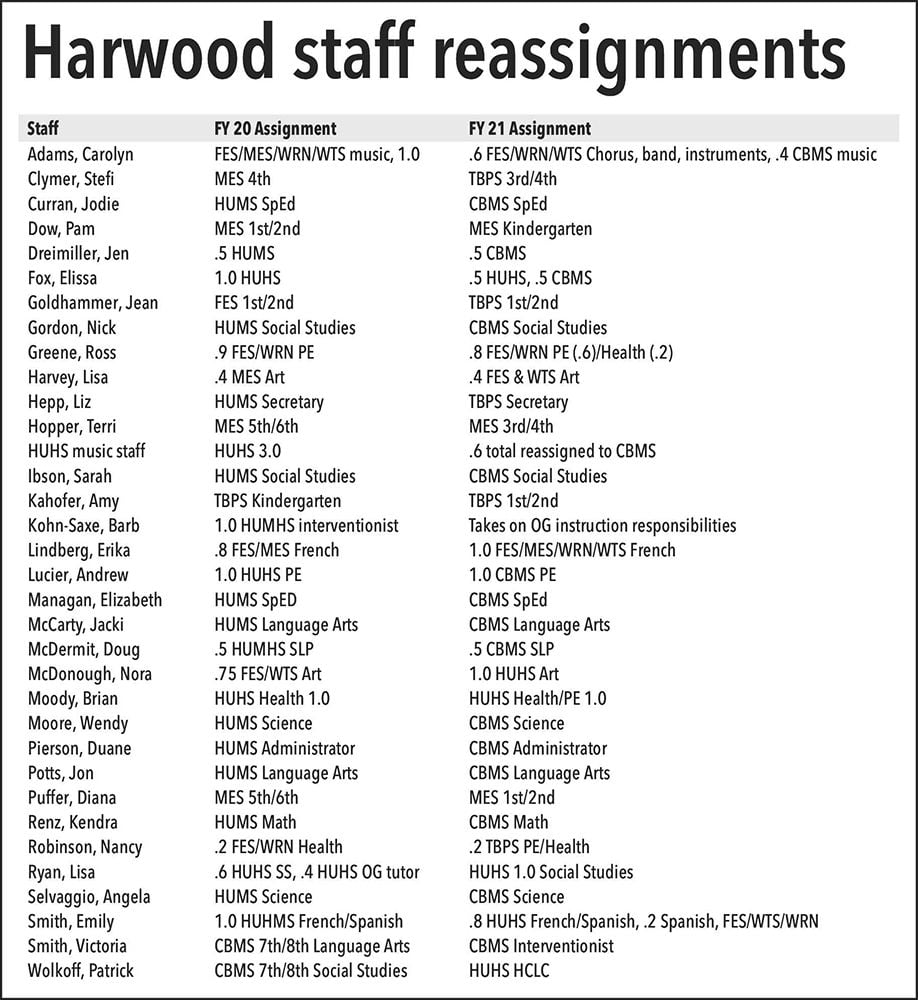 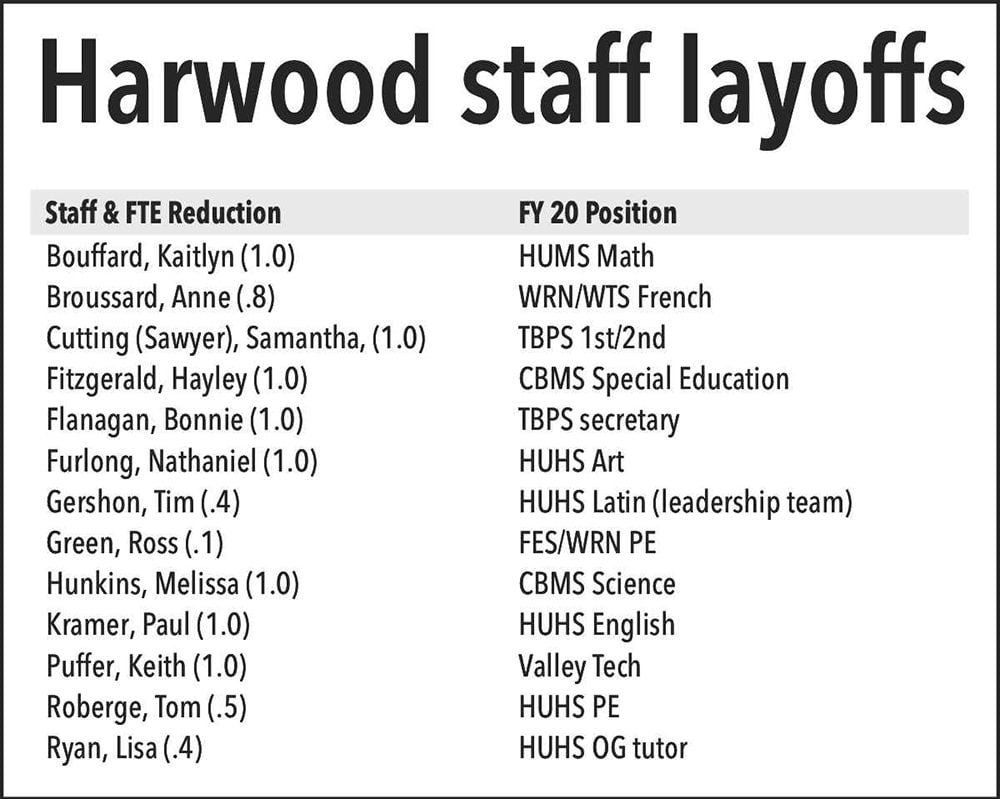 All told, 13 teachers have received reduction-in-force (RIF) notices, indicating they will not have jobs for the upcoming 2020-21 school year; an additional 34 teachers have been notified they will be teaching a subject, a grade or at a location different from what and/or where they currently teach.

The move follows the Jan. 22 adoption of the proposed budget for the upcoming year by the Harwood school board. Plans include moving all seventh- and eighth-graders to Crossett Brook Middle School, and to cease offering grades 5 and 6 at Moretown Elementary School.

The fact there are layoffs comes as no surprise; the budget approved by the board in January projected that the realignment plans would save $1,015,000, with the majority of the savings coming from the reduction of 14 fulltime staff members. At the time, the plans called for cutting four teachers at the seventh- and eighth-grade level, two teachers for fifth- and six-grades, two special educators and one administrator.

However, at the Feb. 12 Harwood board meeting, Greg Shepler — co-president of the Harwood Teachers Association — offered a presentation on how the layoffs would impact educational offerings at the district’s schools.

Among the disclosures offered by Shepler was that while plans might call for laying off middle school teachers, the cuts would actually hit teachers for grades 9-12. There are two factors at work; first, for the purposes of laying off teachers, they are treated as being in two separate groups — K-6 and 7-12. Second, who will be laid off is a function of how many years they have been with the district, and their level of certification.

In short, while the intent might be to cut teachers in grades 7 and 8, the terms of the teachers’ contract result in the cuts happening for teachers for grades 9-12.

The RIF notices impact six high school teachers and one tutor who serves high school students. To compensate for those cuts, some teachers who currently serve middle students will be reassigned to teach high school.

Shepler warned that the layoffs will amount to the “dismantling” of the district’s alternative education program, which has been in place for more than two decades and currently serves 16 students. The program is led by a two-teacher team that is facing the prospect of job loss, and Shepler expressed concern with the possibility of finding the right staff to replace them.

“Could we get other people to teach that? It’s a program that requires a special talent. There’s nobody knocking on the door to take those positions,” Shepler said.

The prospect of losing the alternative program came as a surprise to board vice-chair Torrey Smith, who said, “I was not under the impression that we were cutting any programs. Are you saying there is no way that program will be staffed?”

Superintendent Brigid Nease said there are no plans to cut the alternative program.

Shepler’s presentation came after the teacher’s union exercised a clause in the contract that requires the board to meet with staff to discuss layoffs.

In truth, Harwood’s teachers have been addressing the board about potential cuts since at least November, when Shepler presented the board with results of a staff survey that included 86 respondents, in which 92 percent of staff said bigger class sizes are detrimental and 88 percent said closing a school is detrimental to education. In January, the board received a letter signed by 27 teachers at Crossett Brook in opposition to relocating the district’s seventh- and eighth-graders.

The statement drew concern from board member Gabriel Gilman.

Nease said it is “not uncommon” for administrators to discuss contractual issues with the union.

Shepler said that, if the goal is to save money, there are other places the board and administration could look at, such as supplies, professional development and district employees who don’t directly work with students.

“The middle-management positions seem to be growing, while the positions that deal directly with students are under attack,” Shepler said.

When asked by board chair Caitlin Hollister what middle-management positions he was referring to, Shepler said, “I’m not sure. We don’t have that information. What we don’t like are people asking us to change the contract at the end of the game and expect some sort of change, and reprisals if we do not.”

Kim Laidlaw of Fayston implored the board to listen to the teachers.

“I just don’t understand why you wouldn’t want to hear from the people who are going to be impacted by these decisions,” Laidlaw said. “Give them a shot to come up with an alternative solution. You owe it to us to at least listen to them.”

Harwood school layoffs cause an uproar on eve of votes

Harwood school administrators revised their list of staff members who are expected to lose their jobs or be reassigned, two days after teacher…