You are the owner of this article.
Edit Article Add New Article
Home
News
State And World
Calendar
Special Publications
Multimedia
Marketplace
Classifieds
Contact Us
Follow Us
1 of 11 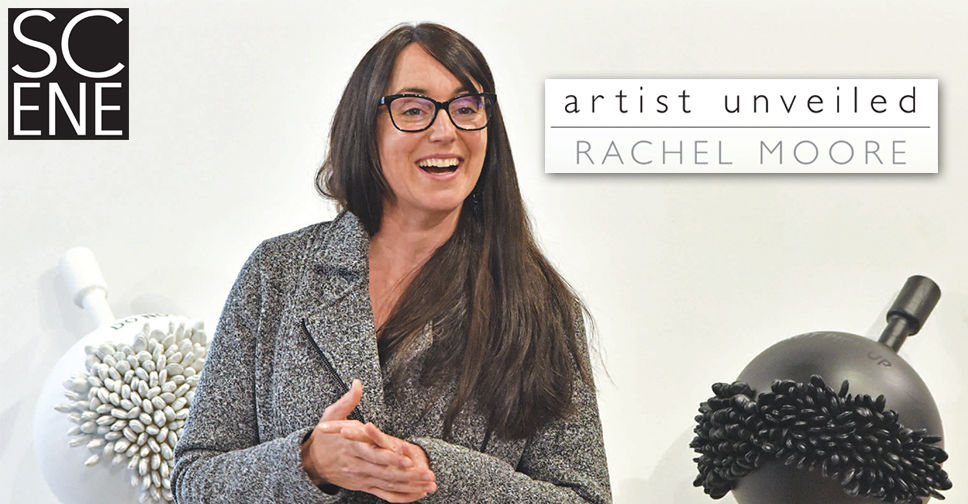 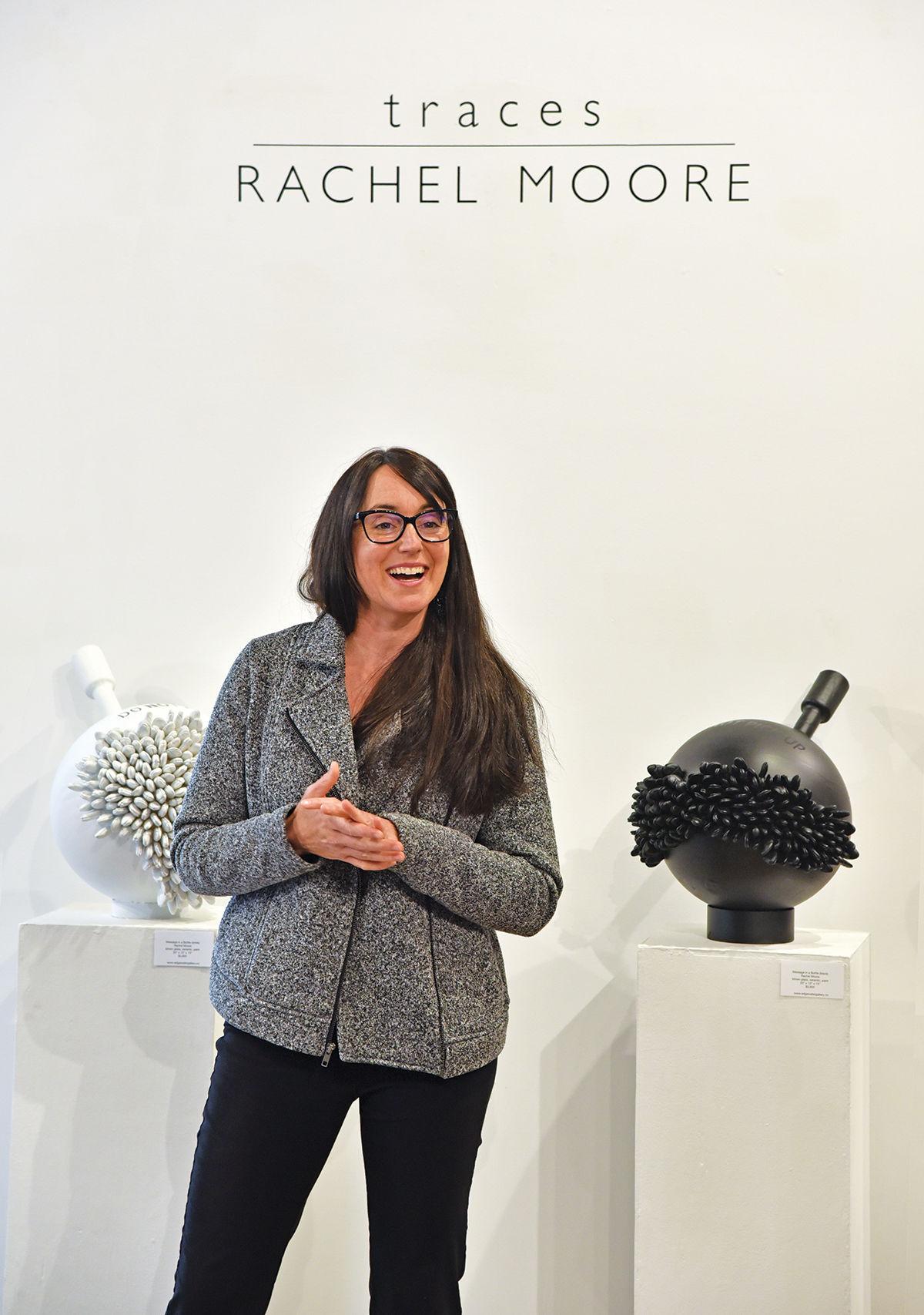 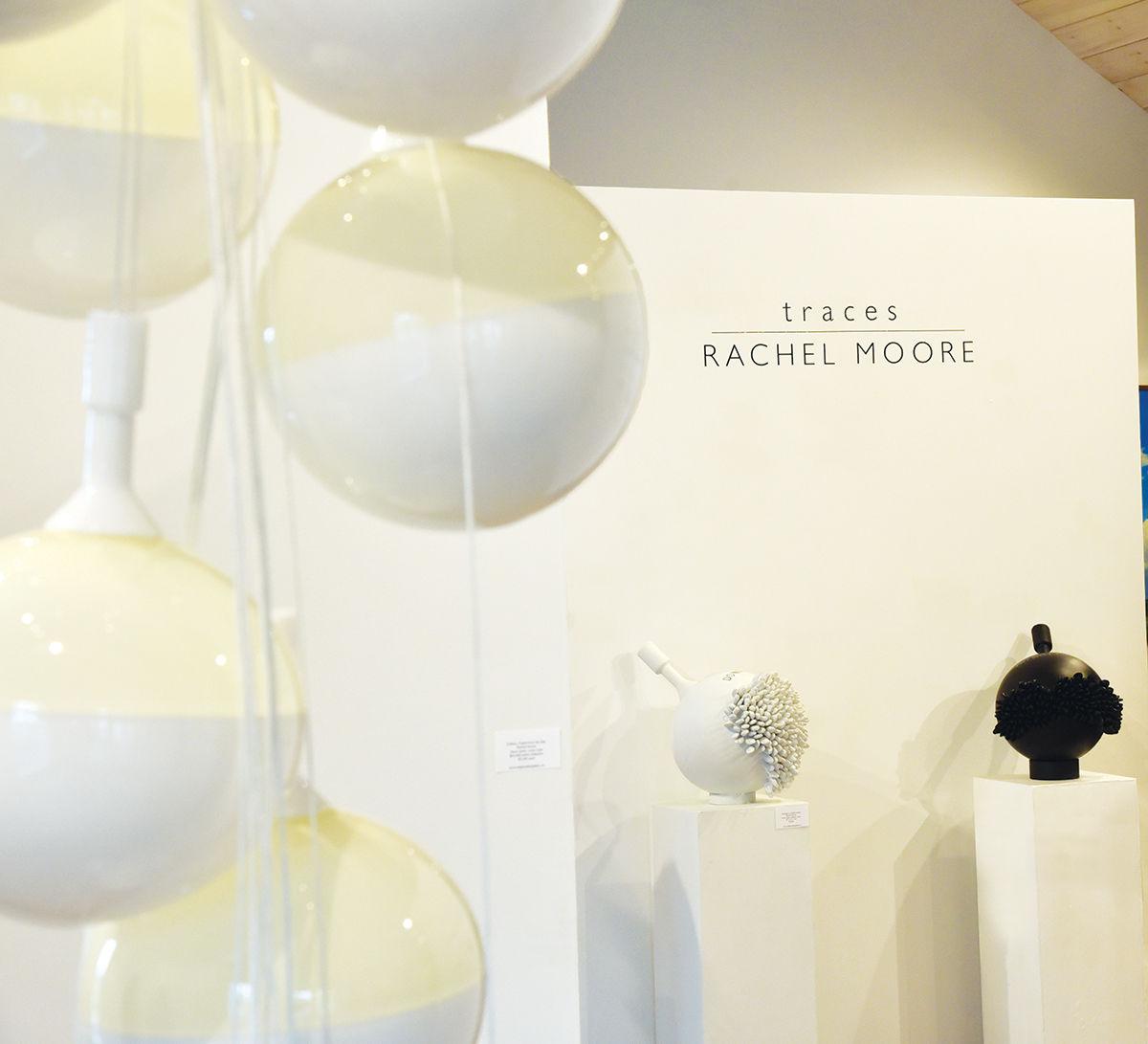 “Message in a Bottle (White)” and its black counterpart occupy the center of the Rachel Moore exhibit “Traces,” while a portion of “Drifters, Pulled From the Sea” hangs in the foreground. 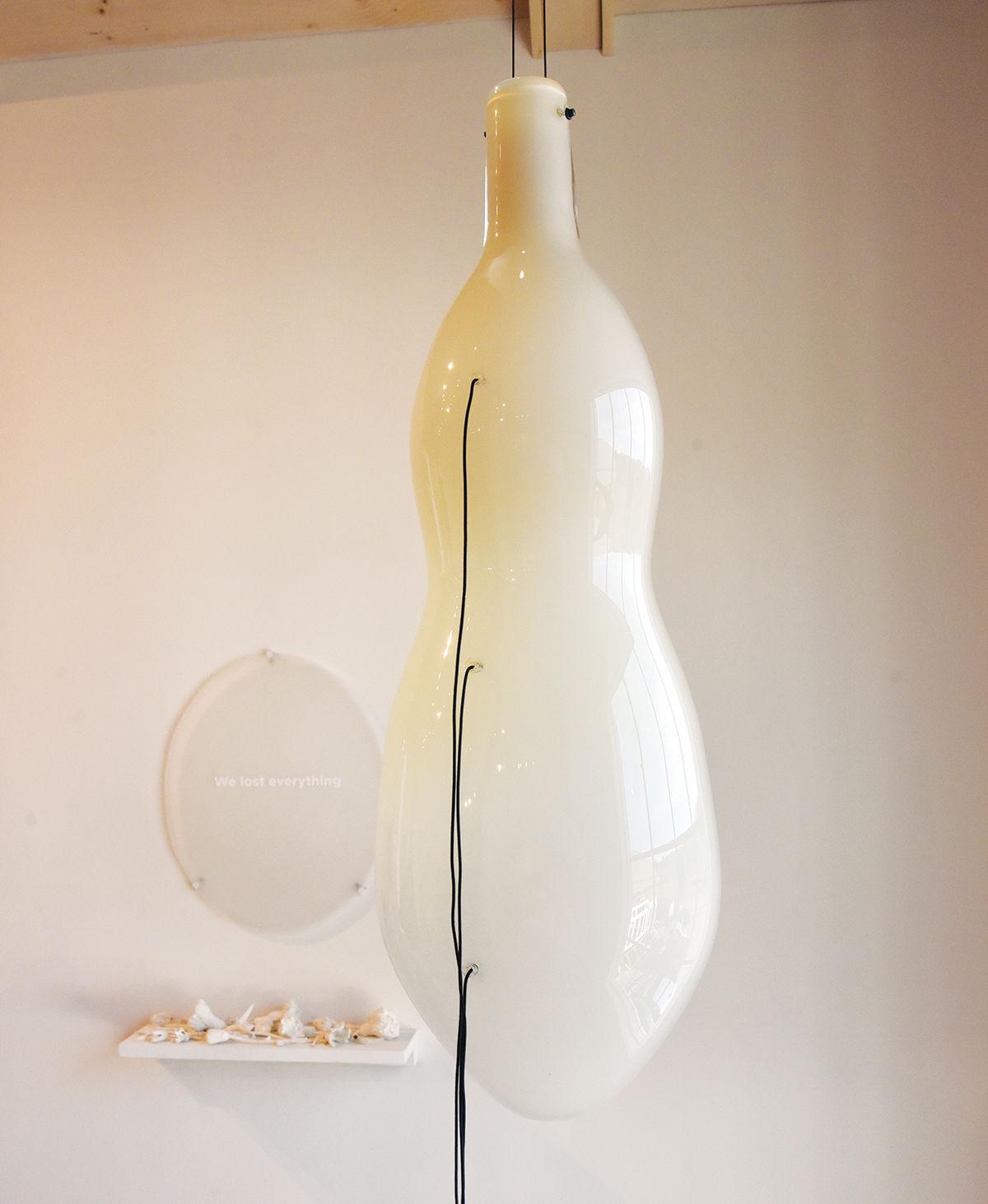 “Part,” made of blown glass and plastic cord. 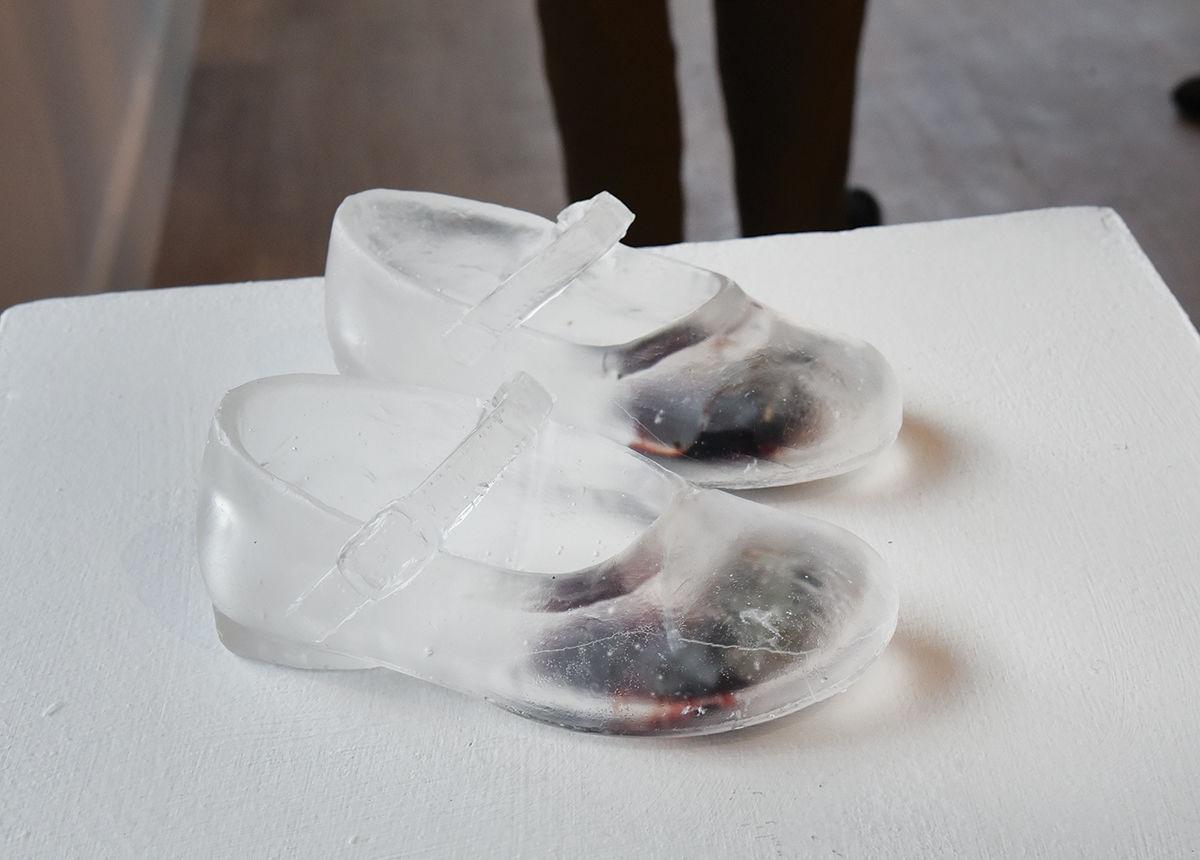 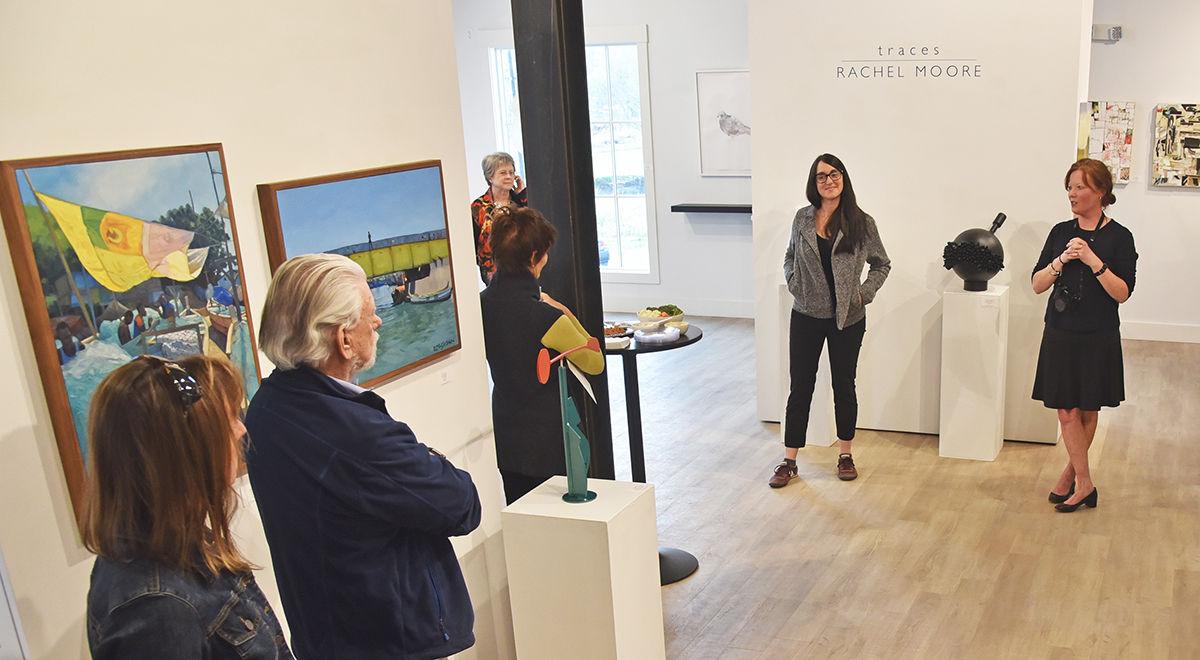 Rachel Moore and Edgewater Gallery curator Kelly Holt at the May 11 opening. 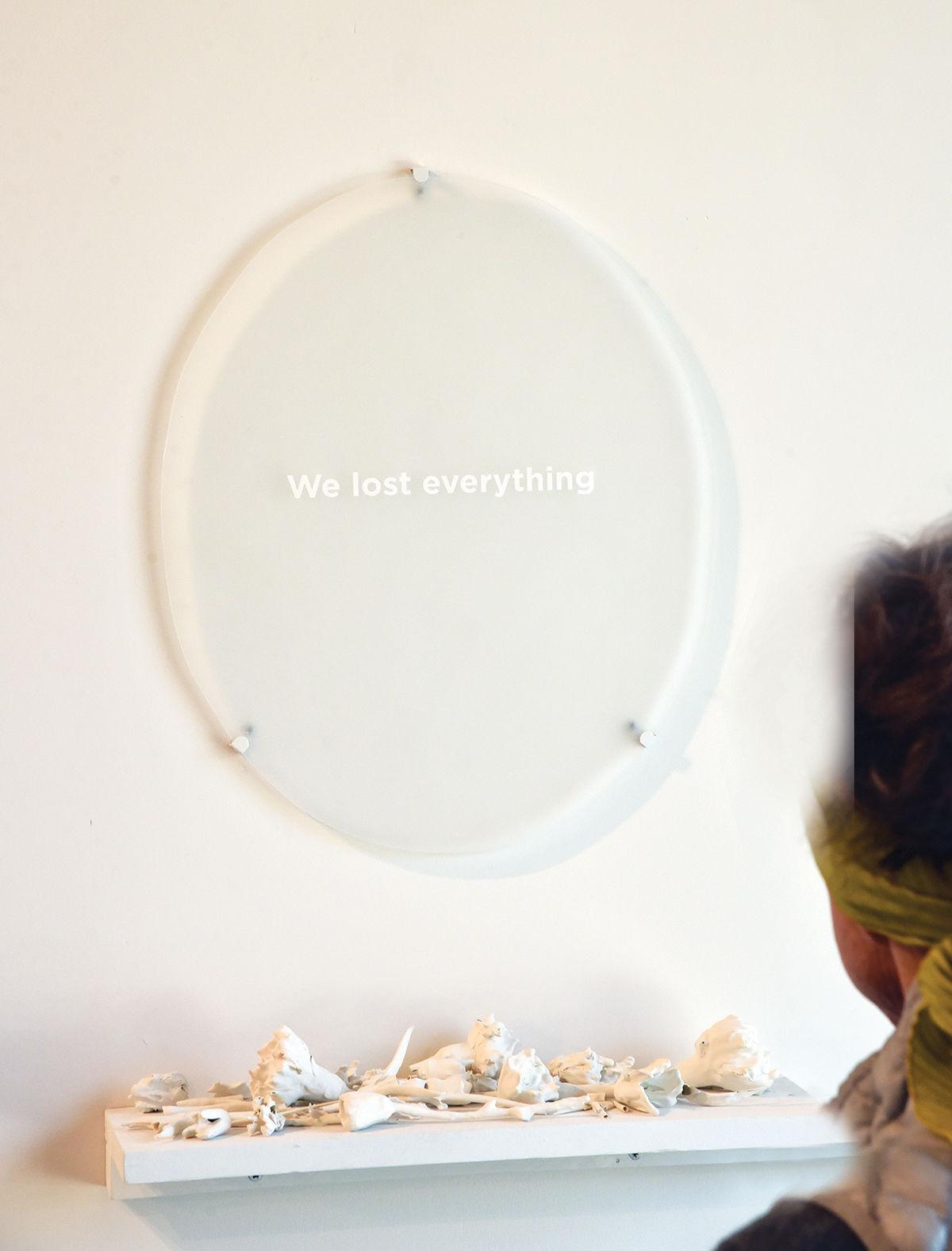 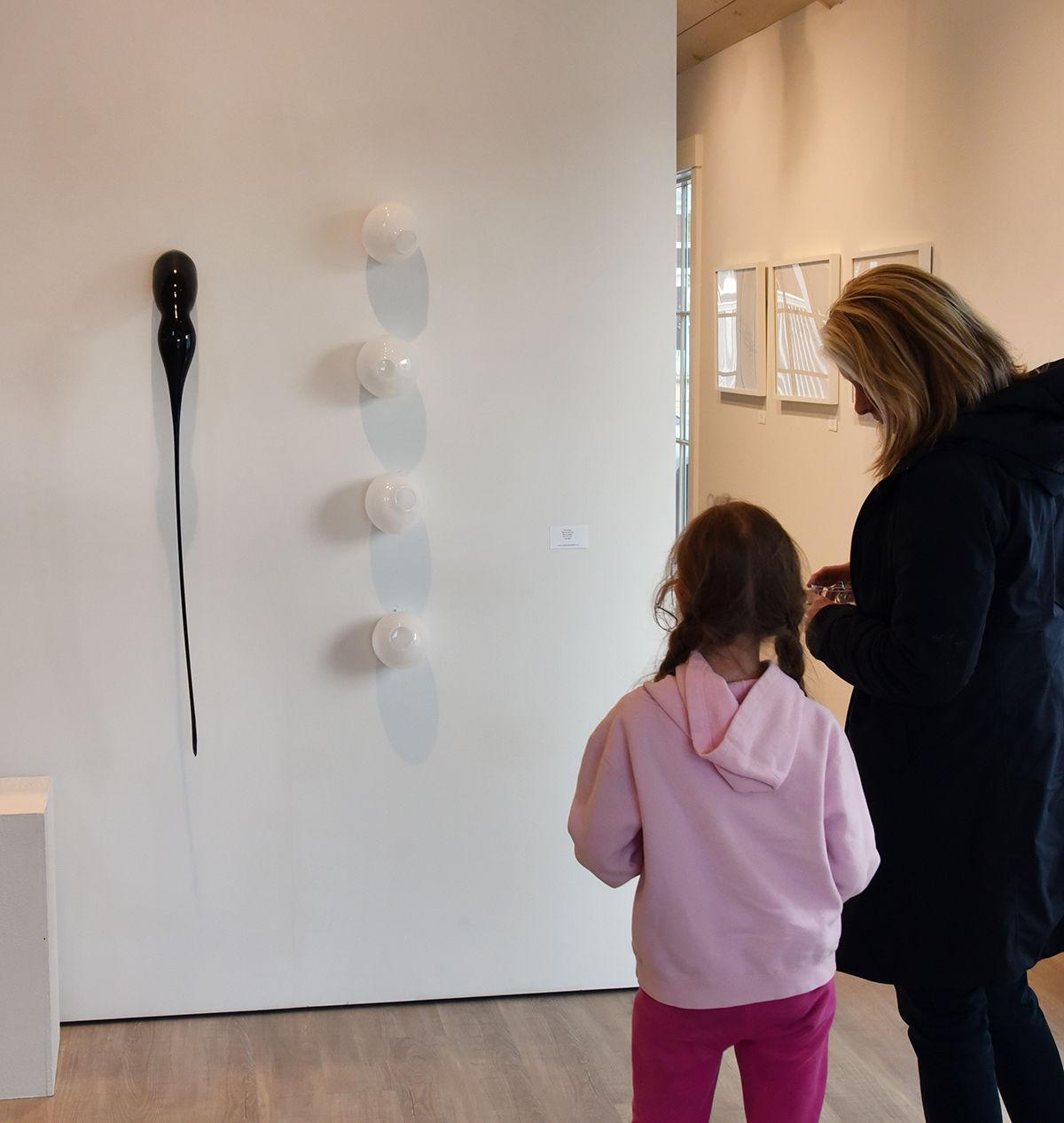 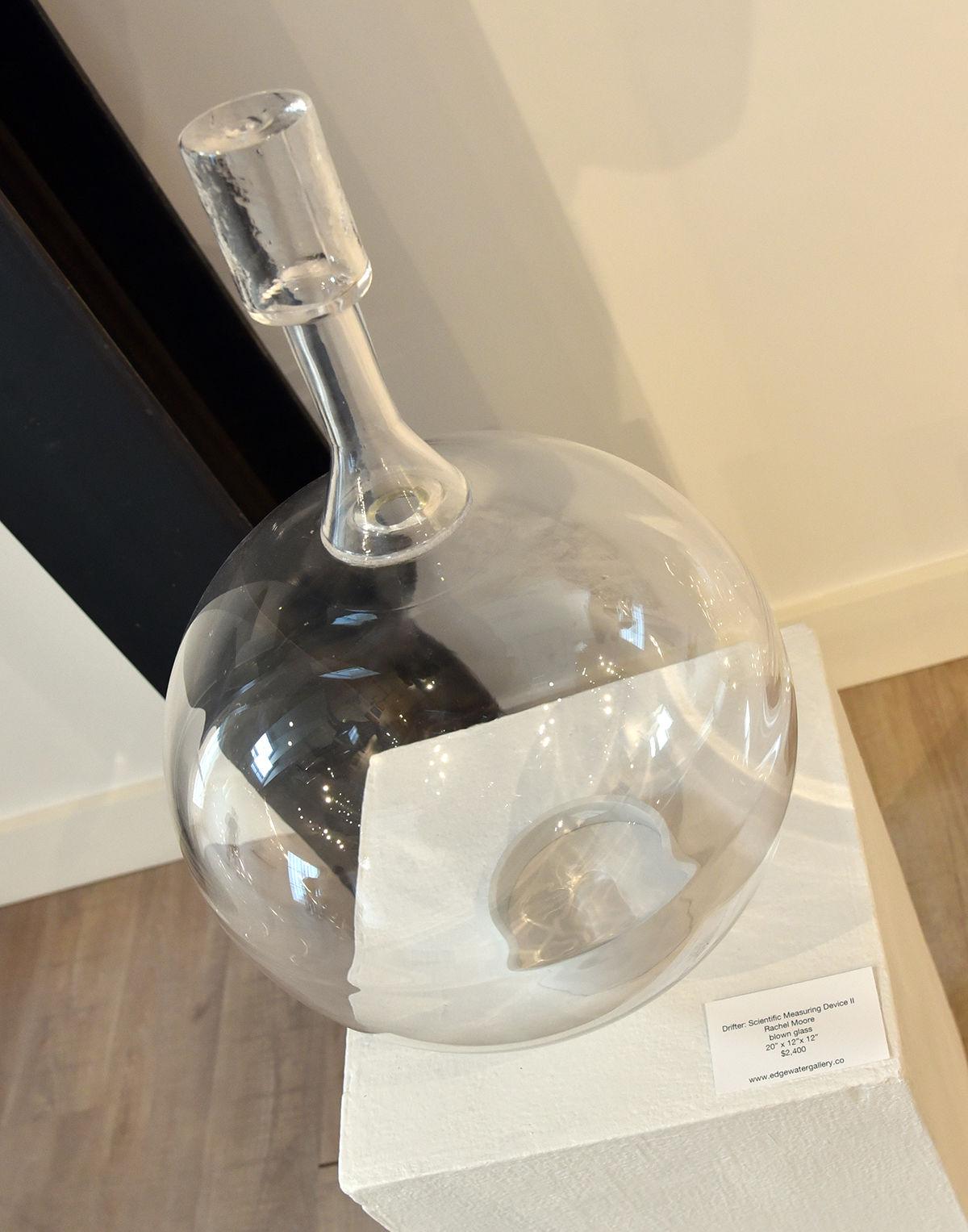 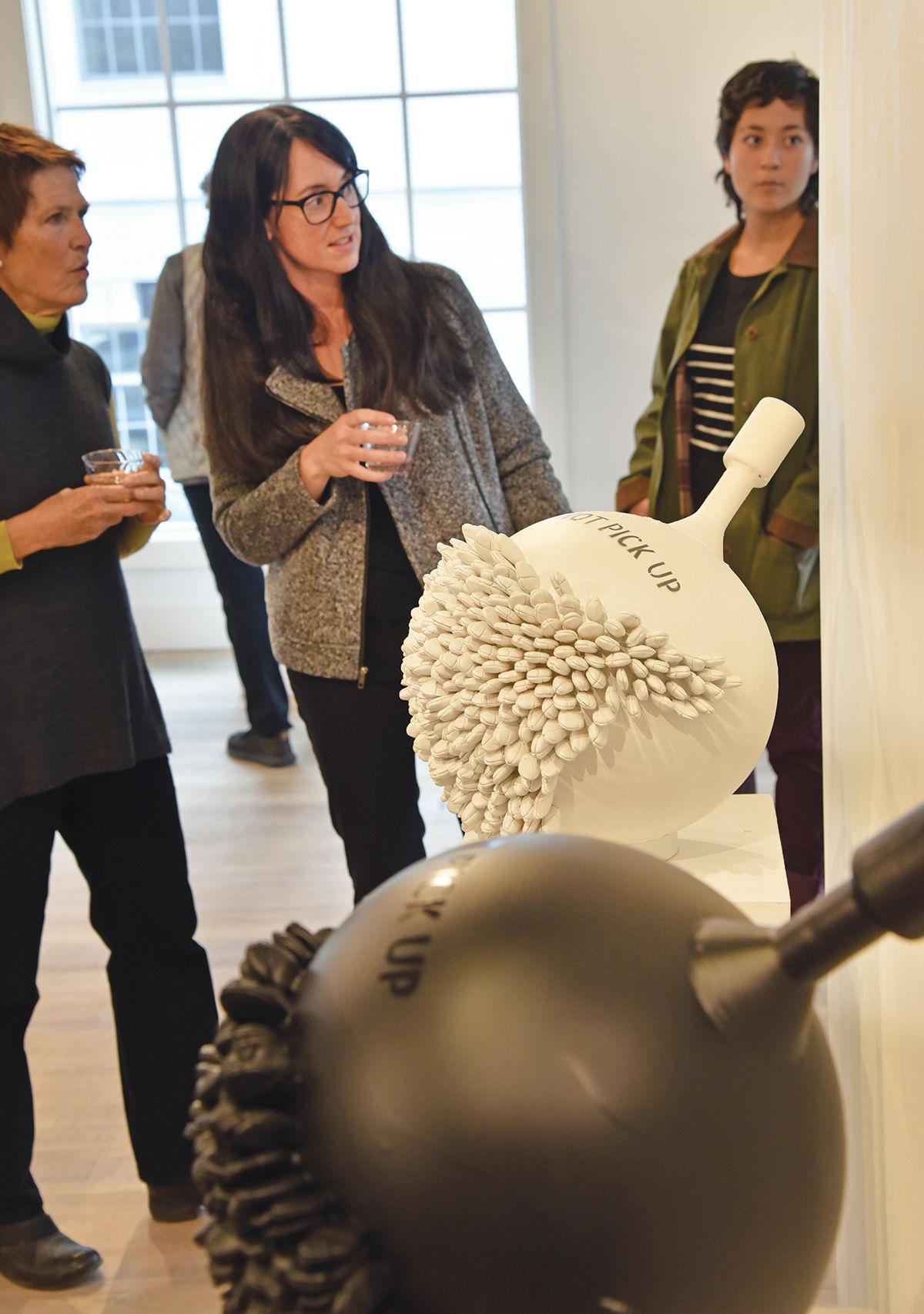 “Message in a Bottle (White)” and its black counterpart occupy the center of the Rachel Moore exhibit “Traces." 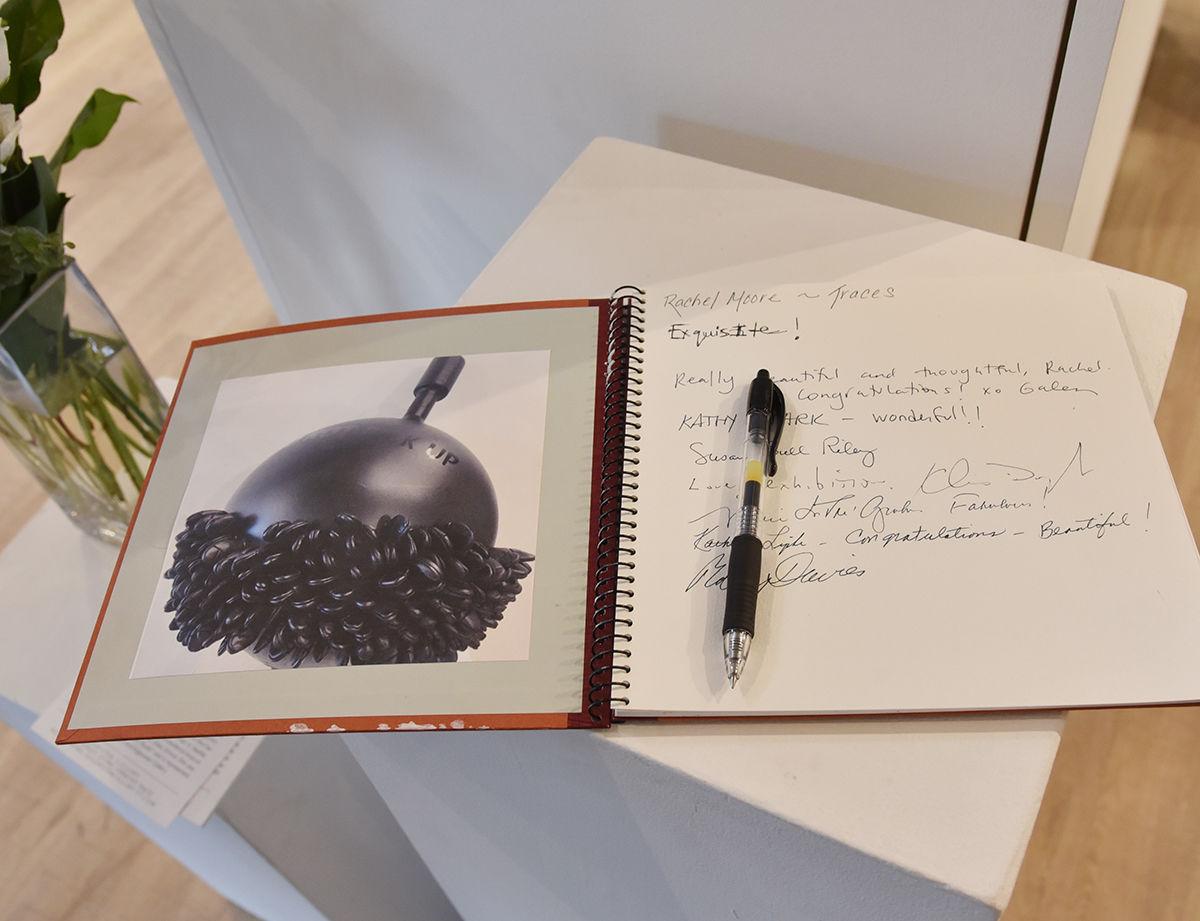 “Message in a Bottle (White)” and its black counterpart occupy the center of the Rachel Moore exhibit “Traces,” while a portion of “Drifters, Pulled From the Sea” hangs in the foreground.

“Part,” made of blown glass and plastic cord.

Rachel Moore and Edgewater Gallery curator Kelly Holt at the May 11 opening.

“Message in a Bottle (White)” and its black counterpart occupy the center of the Rachel Moore exhibit “Traces."

Rachel Moore has been at the Helen Day Art Center since 2010, and has been its executive director for the past two years, bringing art to the community, curating gallery shows and handling the yearly outdoor “Exposed.” exhibit in Stowe.

But Moore is an artist herself, and now she’s bringing her own art to the community. Her first-ever exhibit in Stowe is located about 500 feet from where she works.

“Traces” opened at Edgewater Gallery last Friday and is something of “a popup retrospective,” says curator Kelly Holt. Ten years of art are on display — blown glass, ceramics, watercolors, mixed media installations — ranging, chronologically, from a piece called “Knowing” from around the same time Moore was finishing her MFA at The School of the Art Institute of Chicago to “Message in a Bottle,” finished about a few weeks ago.

“It’s really just evolved for me. The craft was evident before,” Moore said. “I used to absorb things, but I’ve always been interested in seeing a wider view of the globe.”

“Traces,” as a collection, is nearly devoid of color, relying instead on a creamy white palette that Tom Wolfe might have fancied in a three-piece suit, punctuated by deep black. This choice is helped along by the airy, open Edgewater gallery space, with its vaulted natural wood ceilings and ample natural light.

Talking with Holt a few days after the opening, when the gallery was empty, Moore gushed at how the high ceilings accommodated her piece “Drifters, Pulled from the Sea,” a cluster of hand-blown glass buoys — “I was 100 percent in the glass world for years,” she said — in two shades of white.

You know what they say about things being black and white. “Traces” seems to have something else to say about the relationship between those two non-colors.

“It’s always been about relationships. History and memory. Humans and the environment,” Moore said.

Two versions of “Message in a Bottle” capture a sense of relationships that Moore strives to achieve. The pieces are large spheres of painted blown glass that resemble old naval mines encrusted with ceramic barnacles and emblazoned with the words “DO NOT PICK UP.”

Moore plays with words in many of her pieces, adding a bit of poetry to her sculptures and installations. A piece’s name is often part of the art, and a name can be used as a hint to the piece’s meaning, bolster its impact or undermine itself.

A favorite among artists, “Untitled,” also makes an appearance, in a tiny installation that features an oval frame with the phrase “We lost everything” over a haphazard tumble of ceramic detritus looking like bones and driftwood and fossilized artifacts.

“Sometimes it’s just a window into my thought process,” Moore said of her titles.

A small, tidy installation called “Portrait of a City” offers such a window. It’s a minimalist triptych hung above a smooth grainy wood shelf holding a single black egg-shaped orb. One of the framed pieces in the installation says, embossed white on white, “Only the monuments they want to remember have been preserved.”

“I really hope people take some time to look at it,” she said. “If people take the time with art, it becomes self-evident, and hopefully they are affected by it, and next time they think of something relatable, they can associate this with that. I just think that’s so powerful.”

Moore said her practice is split into three parts.

There’s the studio part, “the making part of it.”

There’s the curatorial part, using other artists’ work as an artistic medium.

And there’s the social aspect of it.

When she was in the undergraduate program at Alfred University, she said, her work was intuitive, and it was often political. After graduating from Alfred, she wanted something a little deeper, a little bigger than just politics.

“Everything was great, but I found myself wondering, ‘Who’s this for?’” she said.

She went to grad school at Chicago’s Art Institute, and studied public art and the social aspects of it. She spent more time visiting the various communities within the Windy City’s orbit.

Perhaps because of those artistic sojourns, immigrants and nomads seem to be a leitmotif in “Traces,” whether overtly in the “Migration Vessels,” or subtly in “Drifters, Pulled from the Sea.”

“As a maker, as an artist, I need to be able to digest what’s going on out there,” she said. “That really fed the social process, and that process starting getting into the creative side of my mind.”

Since moving to Vermont, Moore has purposely kept her practice out of the state. It’s almost as if, with her role at Helen Day supporting other artists and fulfilling the organization’s mission, she feared she might be stealing some of those artists’ spotlights if she were to showcase her own work.

She’s had exhibitions in Boise, Chicago, Seattle and Thessaloniki, Greece, but it wasn’t until 2016-17, when she showcased her work at Burlington City Arts, that she felt comfortable enough for a Vermont show.

Curator Holt helped out. As Moore and Holt walk around the Edgewater gallery talking about various pieces, they share glances and nods and laughs about one thing or another perhaps related to the question.

Holt’s been a friend and a fan of Moore’s for a while, and she wanted to build something out of a decade’s worth of Moore’s work in glass and wood, paper and paint. And said it was “a gift to see it all here together.”

“We have that trust, and that’s so important to letting me build a vision,” Holt said.

Holt said she thinks people have been spending more time with the exhibit than usual. One visitor spent an hour with “Traces.” As a curator, Holt thinks those types of visitors, who may have no intention of ever purchasing a piece, are important to some sort of greater expanding sense of art appreciation.

“If art changes someone in some small way, it’s worth it,” Holt said.