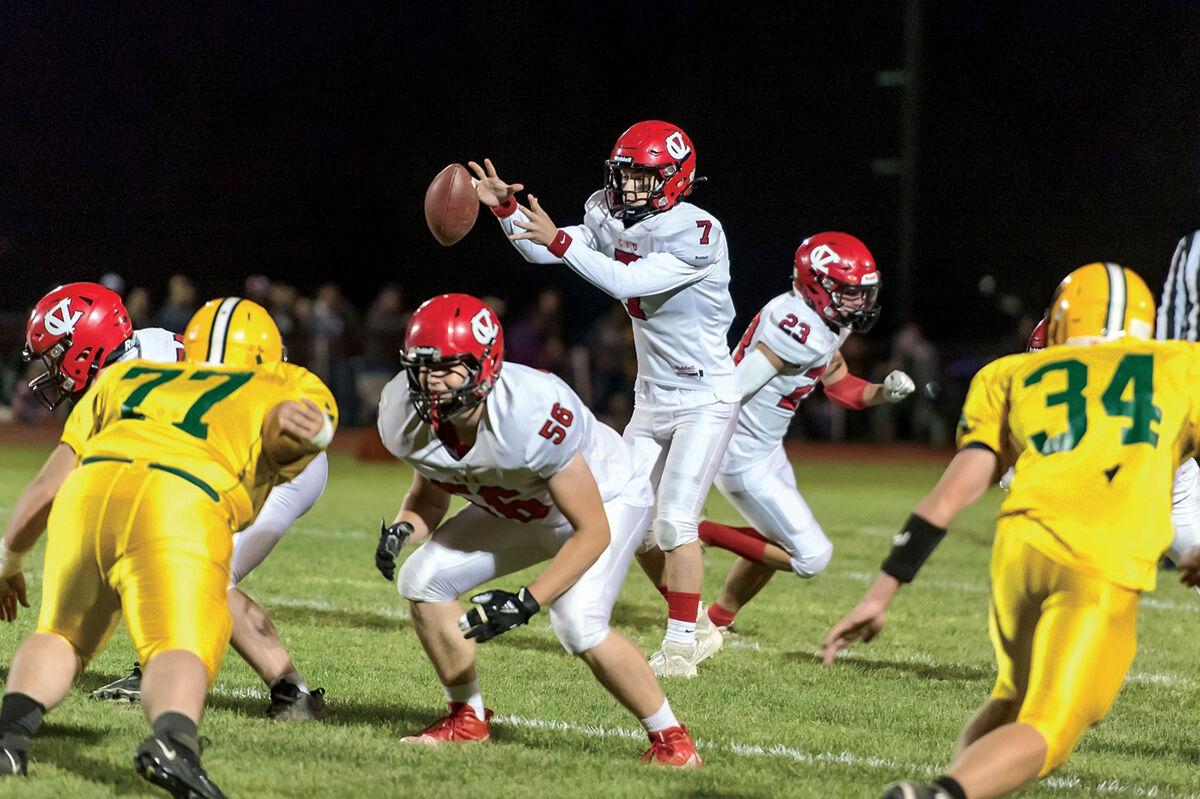 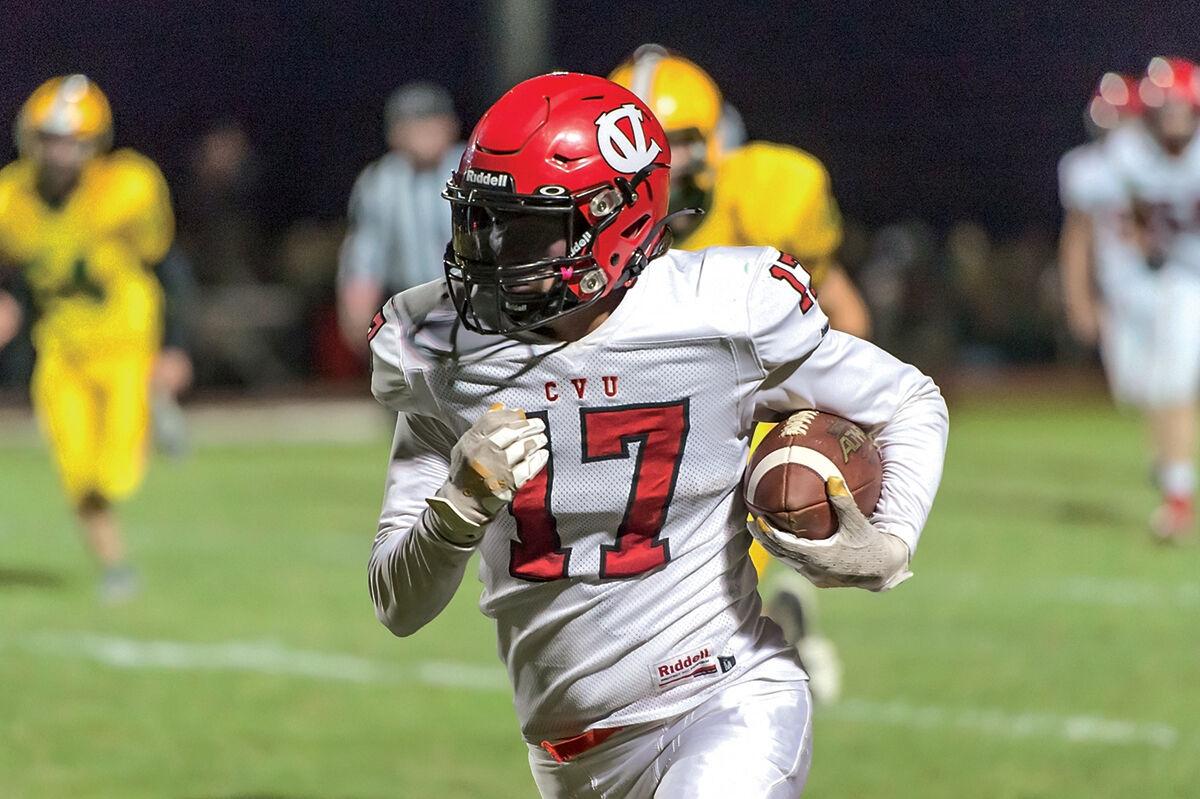 CVU’s Jared Anderson runs down the sideline in a game against BFA’s Bobwhites. 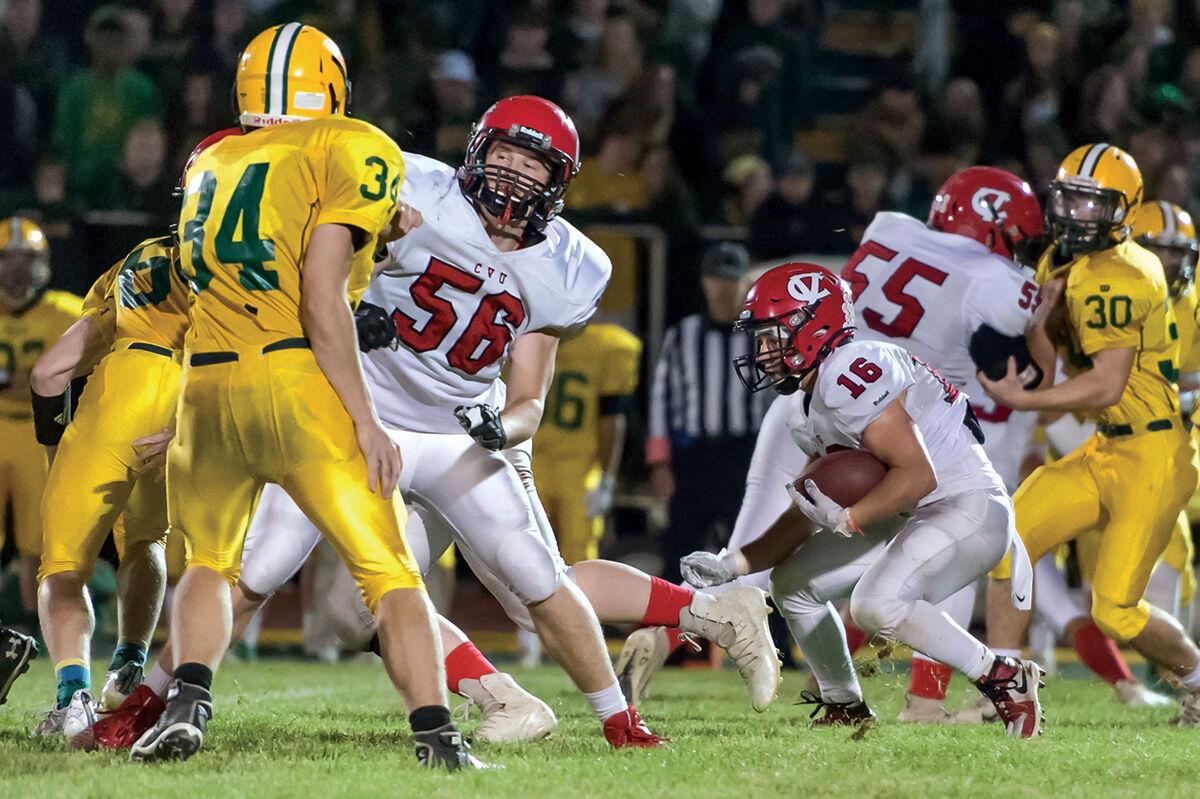 CVU’s Jared Anderson runs down the sideline in a game against BFA’s Bobwhites.

Champlain Valley Union High School wide receiver Alex Provost went up for a catch — grabbing the ball around the Middlebury defender and hanging on as both players went to the ground — and came down with the touchdown and the lead for the Redhawks.

“Bottom line, it was a time for our guys to define themselves. It’s easy to be confident when you’re up by 21. Who are you when you’re trading scores and are now down by 7? Our guys answered the call,” said coach Rahn Fleming. “They’re a bunch of capable athletes who have each other’s backs, who believe in themselves and in one another.”

The eye-catching TD was the highlight of CVU’s 35-14 win over Middlebury Saturday, but it also showcased what is different about the CVU football team this season.

“A win like this one creates a kind of resilience, confidence and momentum all its own in the bigger picture too,” Fleming said. “We’ll bring those with us into the rest of the season and the postseason. But those are effects, not strategies.

The Redhawks are 5-1, their best record since 2009, with a high-flying offense and shutdown defense.

The team has scored 35 points or more in four of their six games and allowed 14 or fewer points in all five wins.

“I think that we are so electric on offense that the defense holding our opponents to six or seven can get overlooked,” Fleming said. “They’re a pretty solid bunch too.”

The story for CVU so far this season has been the passing offense, with quarterback Max Destito finding multiple targets in the air — including Provost, who had eight catches for 81 yards on Saturday.

“Max has matured in front of our very eyes,” said Fleming of his quarterback. “He’s become much, much, much better at moving as little as he has to, but as much as he needs to and keeping his eyes downfield and scanning.”

With multiple speedy options in the passing game Fleming said that last year’s 7-on-7 season helped the team figure out their air attack.

“We had a whole season to work on precision and our routes,” Fleming said. “I can say, honestly, that there has been positive carry over from that 7-on-7 season.”

With receivers like Jack Sumner, Angelos Carroll and Jared Anderson, the offense has plenty of options — especially when you consider Carroll is a running back.

“It’s fun to watch our offensive coordinator, Sandi Sumner, call a game, to set things up and make things happen,” Fleming said. “To move the pieces around in a way that the kids get to have a ton of fun and by the time the defense think they know what’s going on, something else is going on.”

The key to all this success — the real backbone of the offense — is an athletic, experienced offensive line.

“We have guys to whom it matters, who understand that life in the trenches is not glorious, but it’s important,” Fleming said. “We often face linemen that are larger than our guys, but technique and grit can cover about a 50- or 60-pound window when you’re giving away size.

“They’re also very, very well coached. Frank Parisi has done yeoman’s work with them. His impact on our offensive line is palpable.”

Add to that injury and circumstances forcing some players to go both ways, the line becomes a strength on both the offensive and defensive side of the ball.

“One of the benefits of the kids being who they are is they’re both willing and able to learn on the fly, how to play a new position in a week,” Fleming said.

With the improvement of the offense, Champlain Valley sits in a great position with only two weeks left in the regular season. The Redhawks have a bye next week but will face Essex (3-3) in the final game before the playoffs. Only Rutland (5-0) sits above CVU in the standings, while Hartford (5-1) is below the Redhawks in the QPR standings.

Despite the success of the group, Fleming will not let his team get ahead of themselves.

“One of the deadliest things we can do to our momentum is to believe our own PR. It’s like, read it, enjoy it, let it go, leave it on the kitchen table, show up and go to work,” Fleming said. “I think our guys have done a real good job of not answering when overconfidence comes knocking at the door. Our record means nothing.”

The record will likely come into play in the next two weeks as playoff seeding becomes clear and CVU is looking at a deep postseason run.

“It ain’t the postseason yet.”