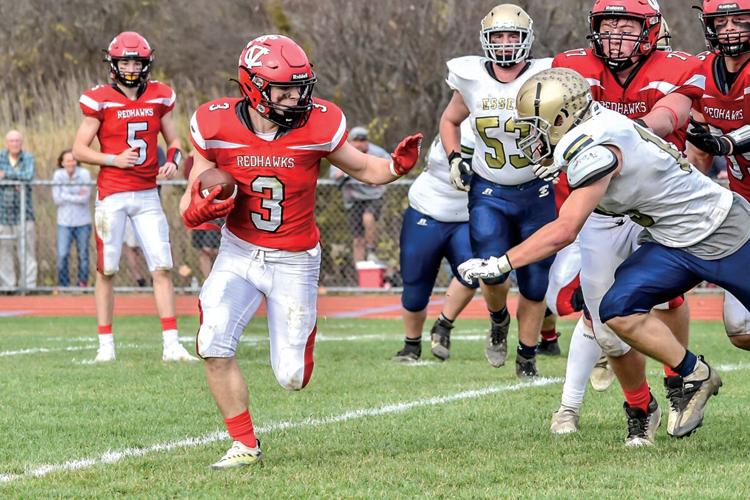 Jack Sumner started the scoring for CVU in Saturday’s title game capping off the game’s opening drive with a 9-yard touchdown run. Here he is turning the corner on Essex’s Joshua Brown during the Redhawks’ Division I semifinal win over the Hornets. 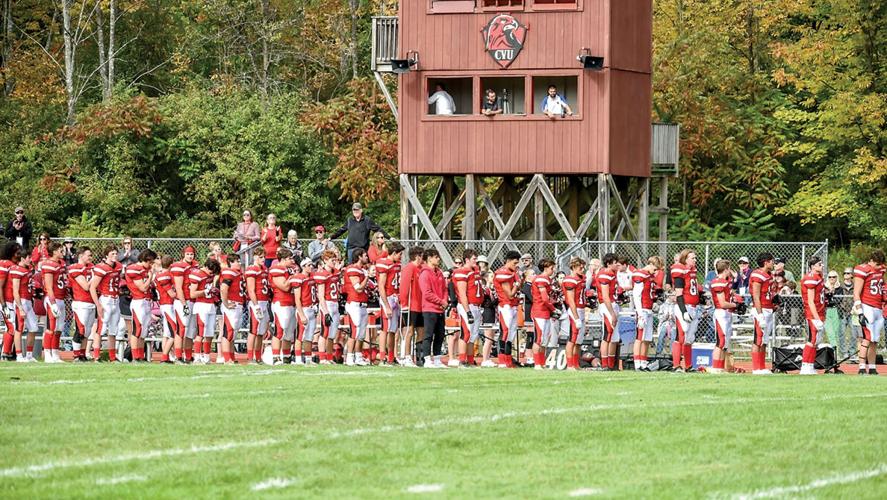 The Champlain Valley Union High School football team before a game this fall.

Jack Sumner started the scoring for CVU in Saturday’s title game capping off the game’s opening drive with a 9-yard touchdown run. Here he is turning the corner on Essex’s Joshua Brown during the Redhawks’ Division I semifinal win over the Hornets.

The Champlain Valley Union High School football team before a game this fall.

All season long, the Champlain Valley Union High School football team has been led by its offense.

The high-powered Redhawk offense has helped CVU blow teams away.

But on Saturday night in Rutland in the Division I state championship game and with a title on the line, it was the defense that saved the day.

Champlain Valley won the title game 24-19 and captured the program’s first state championship by stopping a Middlebury comeback on the goal line as time expired.

“We legitimately lost our mind,” CVU coach Rahn Fleming said. “The ball gets knocked away, the clock ticked to zero and everybody on the defense began to run toward the sideline and everybody on the sideline began to run toward the defense. It was so symbolic of how it didn’t matter if you set foot on the field for a single competitive rep, we got there together.”

For most of the second half, it looked like the No. 1 Redhawks would not need any late game drama to ensure a title win. But with just over three minutes remaining in the game, Middlebury cut the CVU lead to 24-19.

Then the Tigers defense made a stand with a chance to put together a game-winning drive.

No. 3 Middlebury moved up the field — a 26-yard pass and a penalty on the CVU defense helped — until they got to the 8-yard line.

But Redhawks answered, keeping the Tigers out of the end zone and clinching the win.

“In those final plays when it mattered most, they gave everything and it was enough,” Fleming said. “It was a bend but don’t break performance at a moment when the breaking would’ve been irreparable.”

Jack Sumner started off the scoring for CVU, capping off the game’s opening drive with a 9-yard touchdown run.

The Tigers tied the game up early in the second quarter, then took the 13-7 lead on a 21-yard TD run later in the frame.

Quarterback Ollie Cheer put the Redhawks back in front with under two minutes to play in the first half, hitting Brian Rutherford with a 15-yard touchdown pass. Aidan Morris hit the extra point to put the team ahead 14-13.

CVU forced a turnover with 15 seconds left in the second and Morris hit a 43-yard field goal as time expired to give the Redhawks a 17-13 lead at halftime.

Sumner helped extend the lead, scoring on an 11-yard run midway through the third quarter to put the Redhawks up 24-13.

But Middlebury stopped CVU on the goal line in the fourth quarter, then scored to close the gap at 24-19 with 3:01 left in the game, setting up the late defensive heroics from the Redhawks defense.

The Redhawks can be excused for having flashbacks from last season’s championship game when they lost to Essex late in the game.

“I think that there were certainly among those who were there for the game last year, there was a kind of collective, ‘Oh no, not this, not again, no way,’” Fleming said. “It was an interesting time of increased urgency and of a very painful memory that made it stronger when we most needed it.”

The championship was a culmination of a multi-year march to the top of Division I. After CVU did not make the postseason in 2018 and 2019, COVID-19 put a hold on the 2020 season. The sport played a 7-versus-7 touch football season to get the athletes on the field and the Redhawks advanced all the way to the final.

“I really don’t look at the Covid season as a lost year,” Fleming said. “It was a year for building character and beginning to establish character as a team and beginning to experience ourselves differently, which was you look around the locker room, you see a group of winners, you see guys who get it.”

They turned that success into an appearance in the championship game last season, falling to Essex in a heartbreaker in the snow.

But that loss served as fuel for CVU as the team pushed for a return to the title game.

CVU went unbeaten in the regular season against Vermont opponents, with a 10-0 record.