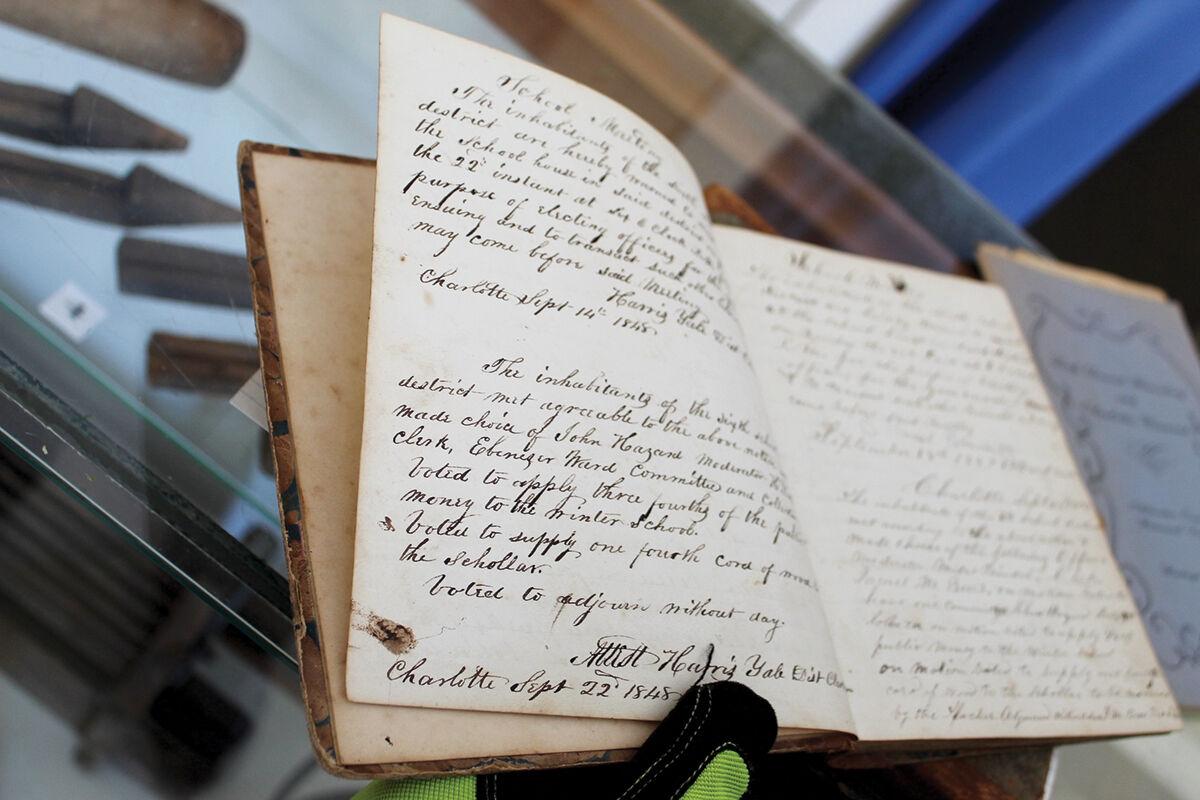 A book shows records from the 1800s in the Charlotte Historical Society museum. 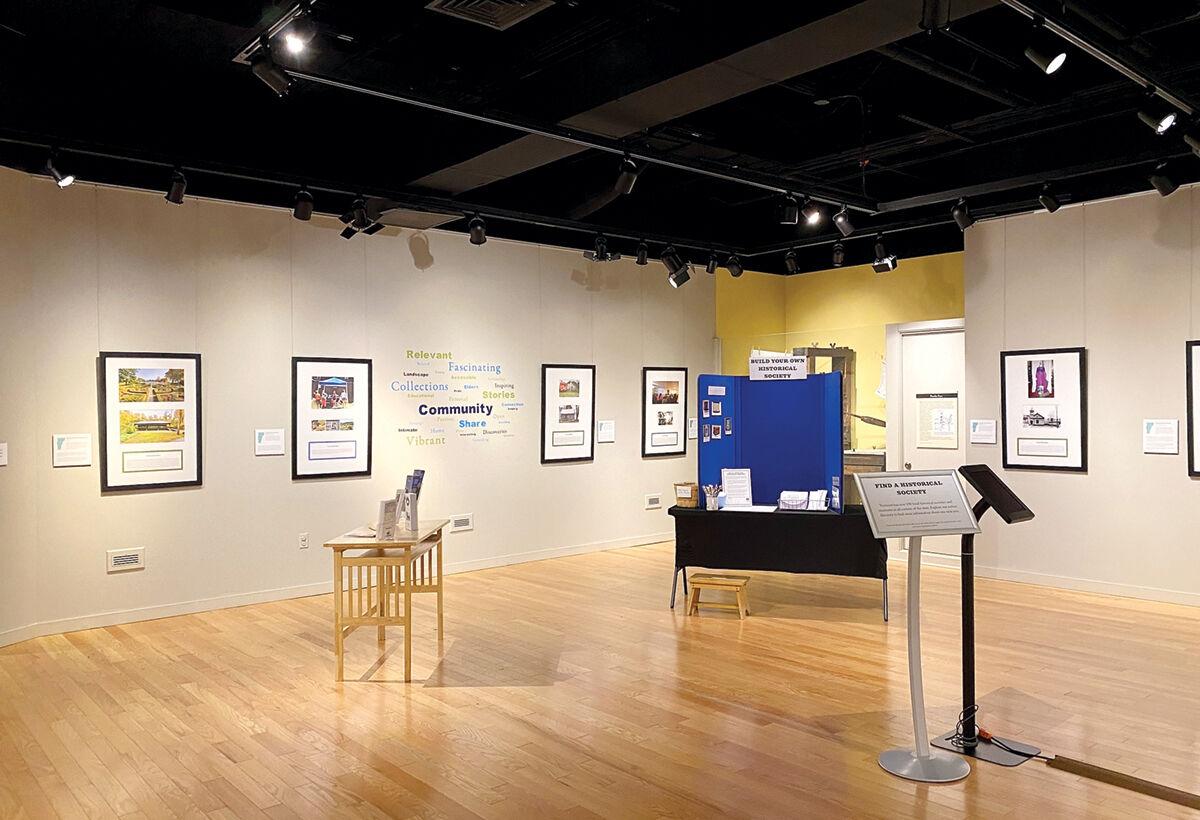 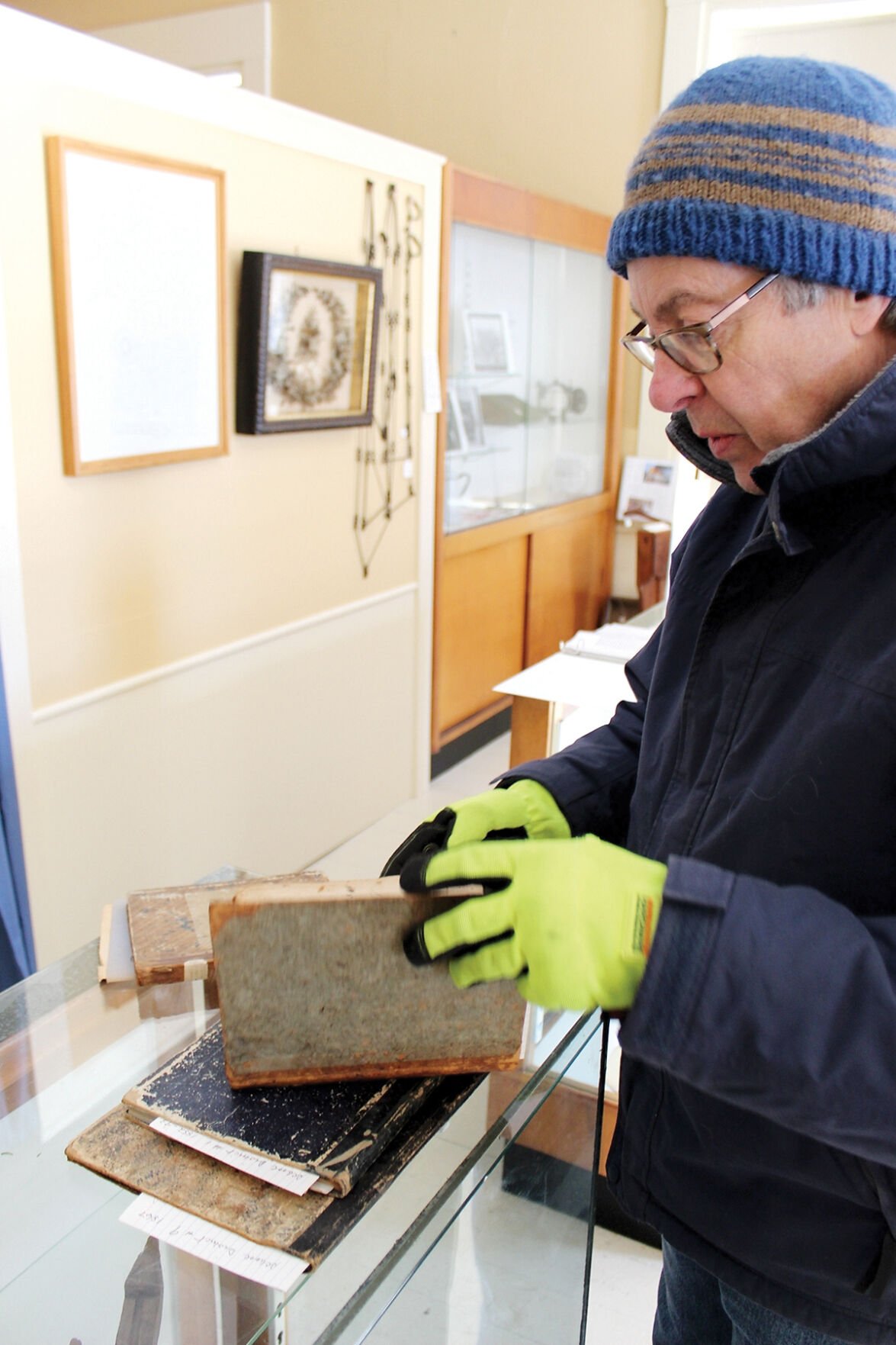 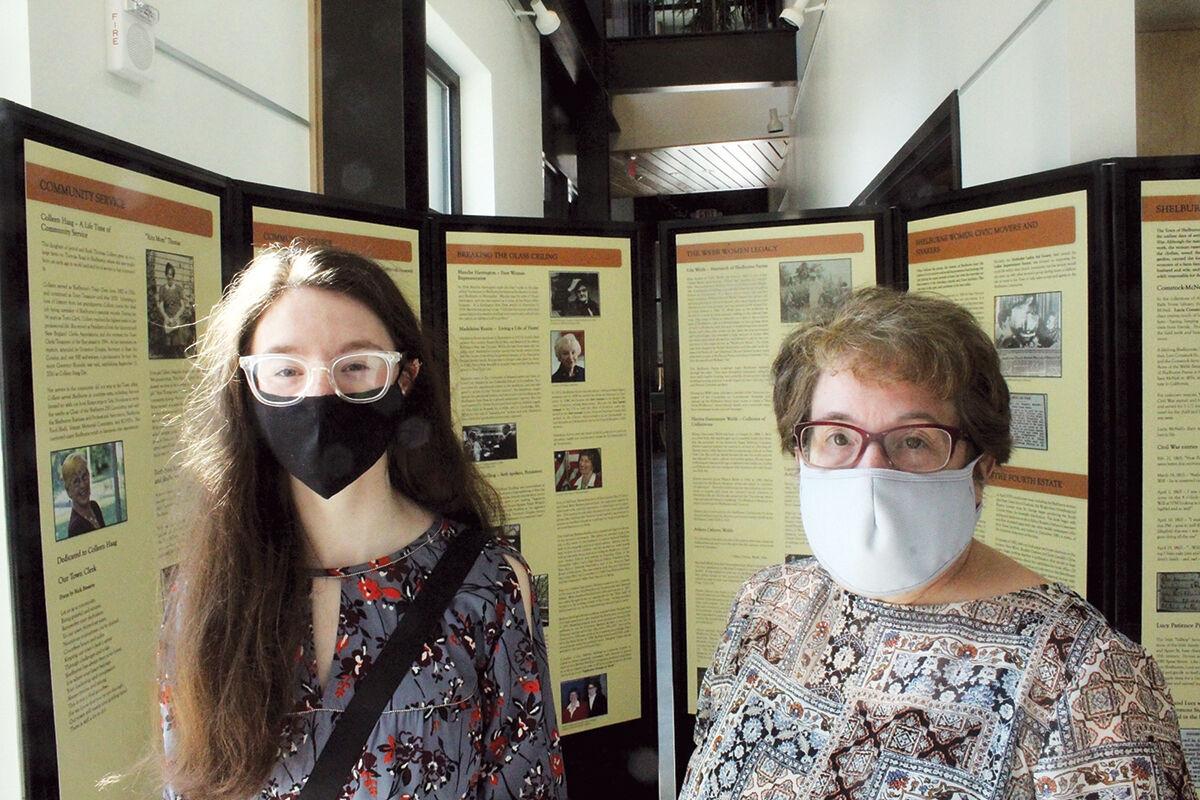 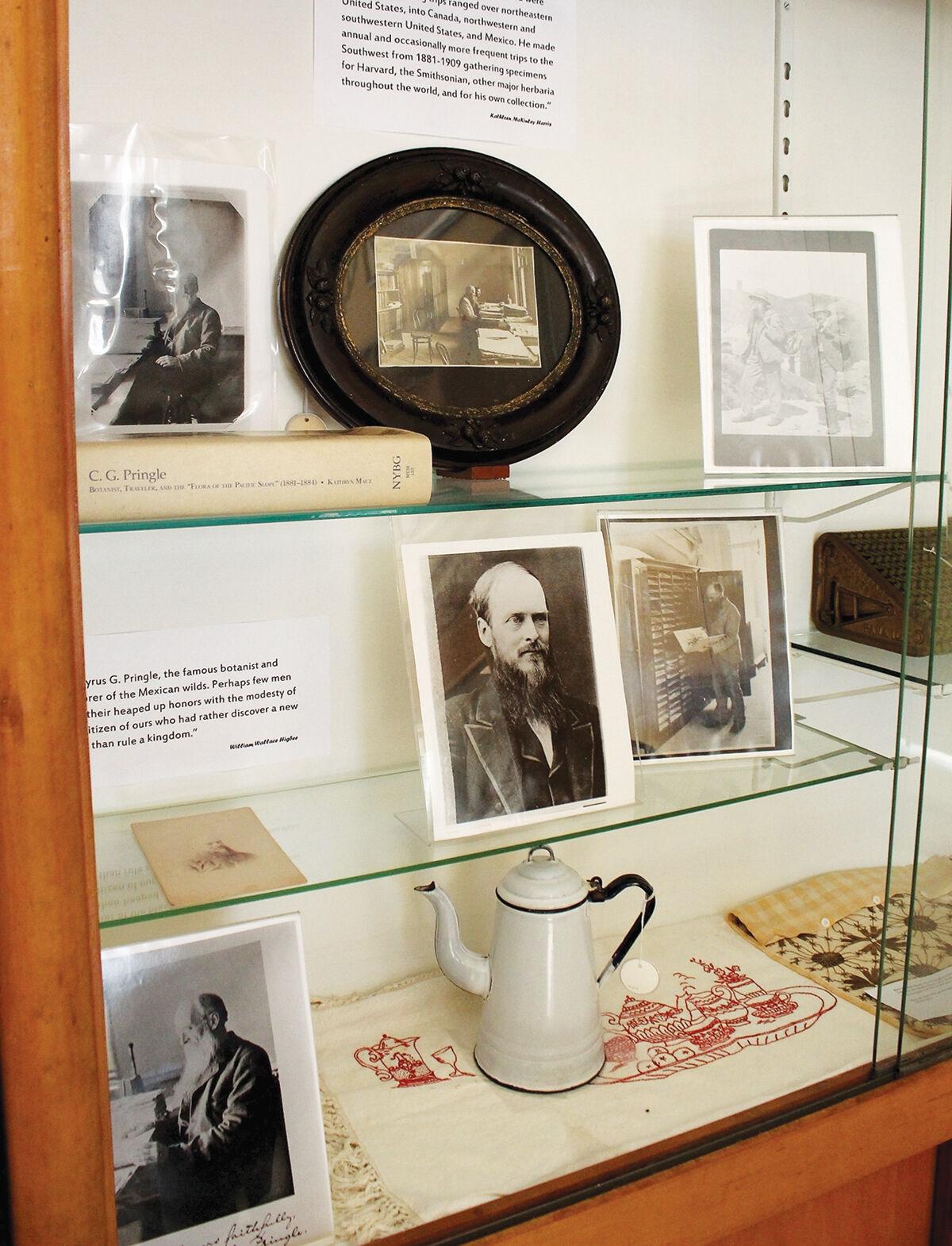 Some of the many artifacts on display at the Charlotte museum.

A book shows records from the 1800s in the Charlotte Historical Society museum.

Some of the many artifacts on display at the Charlotte museum.

As Reeves Strawbridge worked on an exhibit for the Shelburne Historical Society, she discovered she had an affinity for local history.

Pitching in on teaching curriculum for suffrage exhibit as part of a senior project at Vermont Common School Strawbridge said she learned, “It’s important to be interested in the history of the place where you live.”

She was also surprised to learn how many powerful women had been a big part of the town’s history.

Reeves, who is now an online Skidmore College freshman, is a great age for historical societies to attract to keep membership numbers up when elderly leaders “age out.”

According to Eileen Corcoran, community outreach manager for the Vermont Historical Society, it is often a town’s elders who work to keep its history alive. When they are unable to continue, historical societies’ futures come into question.

Corcoran said historical societies around the state often have cycles of thriving and dormancy, and people may revive an organization that has been “hibernating.”

Historic anniversaries breathe new life into historical society. Corcoran said a number of Vermont’s groups were founded or became more active in 1991, the 200th anniversary of Vermont’s joining the U.S. as the 14th state.

In other cases, she continued, a newcomer to town might take an interest and get involved.

That was the case for Dorthea Penar.

Penar, president of the Shelburne Historical Society, said her organization tries to recruit people who have recently moved to town to keep it going when she and others inevitably step down.

She hopes people will bring new enthusiasm — it’s good for both the historical society and the town it serves, she said.

“You value the town you live in when you know how special it is. You have to participate in knowing its roots as well,” Penar said.

The Shelburne Historical Society fizzled out in the 1990s when the few really active members grew old or were in poor health, Penar said. It was revived because of the town’s celebration of its sesquicentennial.

The Charlotte Historical Society is sort of a “loosey-goosey,” informal organization, president Dan Cole said. The group can trace its founding back to 1943, when the town voted to make the old town hall a war memorial to Charlotte veterans.

The town’s artifacts are house in what once was Charlotte’s town hall.

Activity fizzled in the 1970s, Cole said, but was revived in 1978 when newer members had a meeting with the founders.

“We have an outstanding collection of Abenaki baskets and other artifacts,” Harris said. “Can you imagine how that influences school children when they come through the Charlotte historical museum?”

Harris is an officer on the Chittenden County Historical Society, a regional organization whose young president, she said, expanded its programs for a wider array of people.

The Hinesburg Historical Society needs a space to house its artifacts, president Jean Miner said. Her home and those of others offer a safe haven for old newspapers, photographs and maps.

Although Miner has the lion’s share of Hinesburg’s historical items, fellow members, like Gill Coates have possession of some.

Coates himself has a military band member’s uniform from the War of 1812 — in his spare bedroom.

He doesn’t know what the historical society should do to try to keep things going when Miner eventually steps down, but he said in the 1990s Miner worked to revitalize the organization, including advertising in the local newspaper.

Coates believes the organization can build membership by having a presence at Town Meeting Day and the Fourth of July and attending Vermont Humanities Council meetings to learn about area experts.

Last year, even during the quarantine, the Hinesburg Historical Society scheduled one of the featured speakers and at least 22 people attended via Zoom, Coates said, as it was a topic of interest.

“Anything with the Civil War will bring them out,” Coates said.

In 1987, Miner gave her mother a ride to a meeting of the five-year-old Hinesburg Historical Society and ended up staying. After a few meetings she was taking minutes. It wasn’t too long before she was president.

Miner said the membership of the Hinesburg Historical Society ebbs and flows, but someone will eventually have to take over from her as president.

“They say I’m president for life, which is a joke,” Miner said.

Thanks for highlighting historical societies

Thank you, Shelburne News, for writing about the importance of historical societies and the efforts of local communities to encourage younger citizens to be interested in their town’s history.