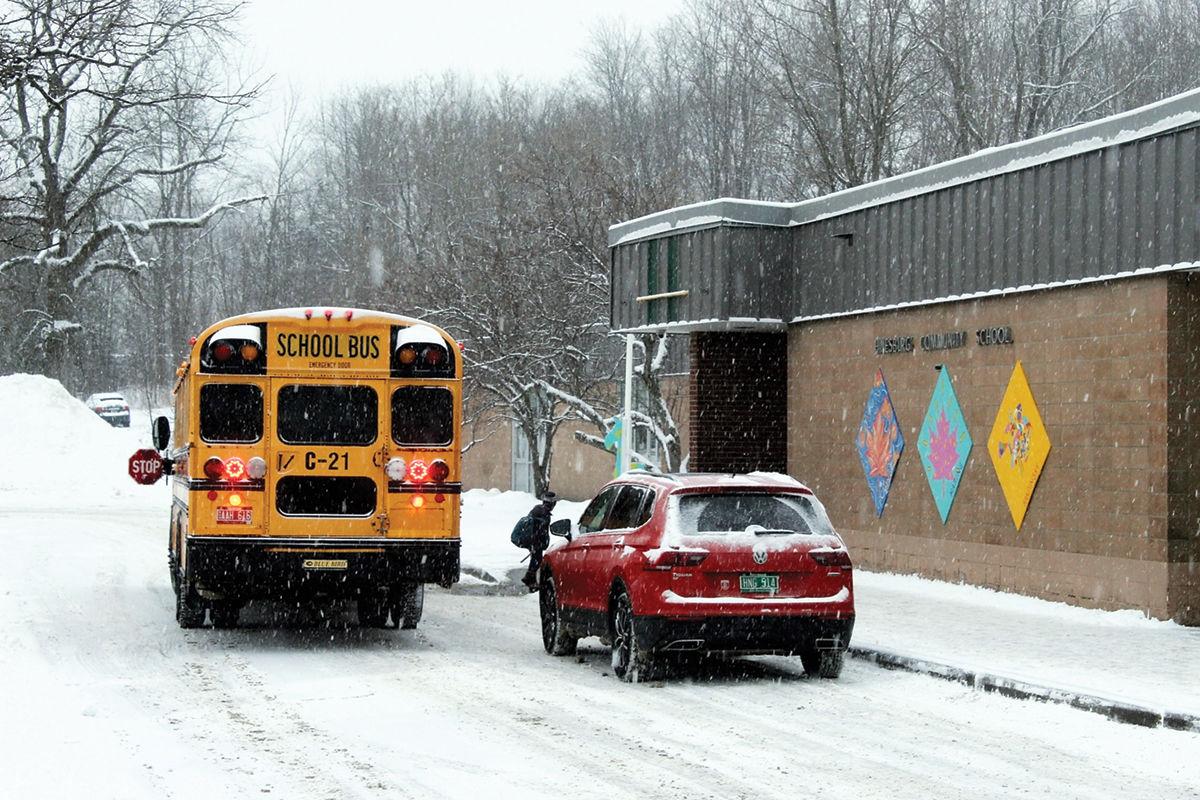 It is illegal to pass a school bus when its lights are flashing and stop sign is out – going either direction – even on school property, as a driver recently found out. 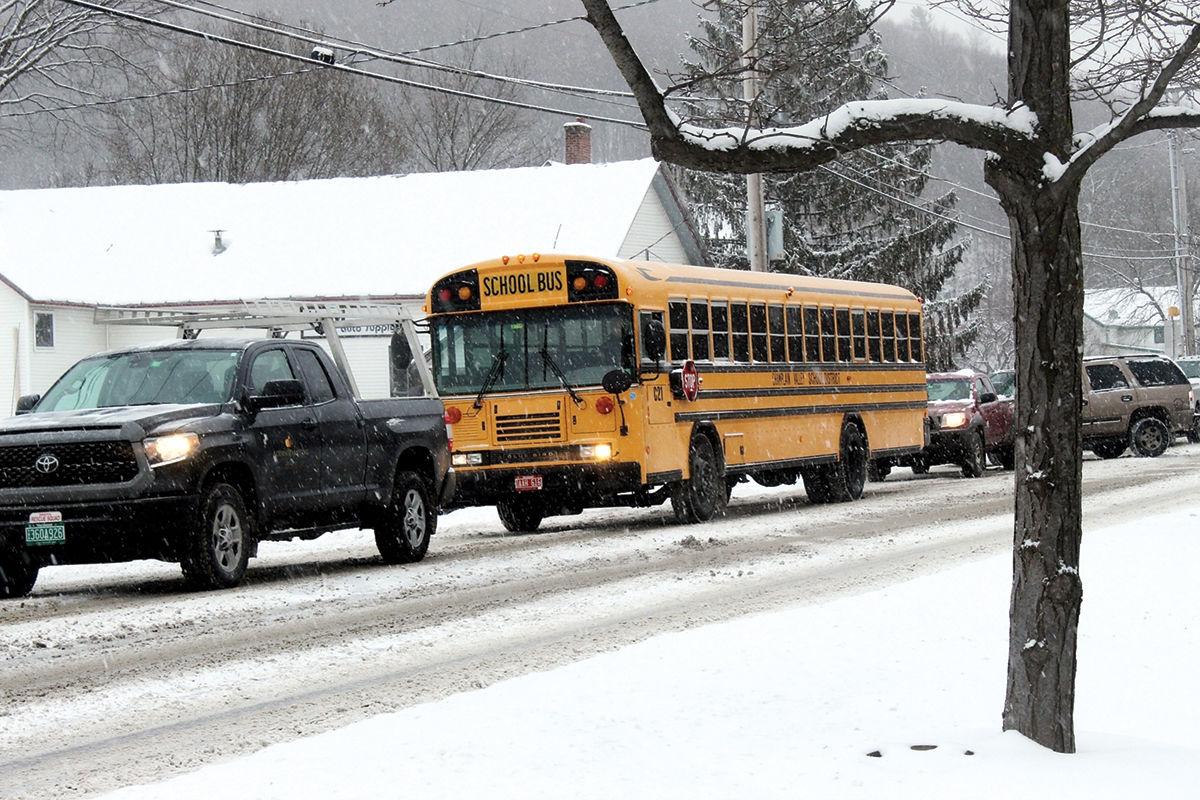 A school bus makes its way through traffic-clogged streets on Feb. 6 – conditions that make it tempting for vehicles to pass illegally.

It is illegal to pass a school bus when its lights are flashing and stop sign is out – going either direction – even on school property, as a driver recently found out.

A school bus makes its way through traffic-clogged streets on Feb. 6 – conditions that make it tempting for vehicles to pass illegally.

The truck was illegally passing their school bus.

The bus was stopped, red lights flashing and stop sign out, waiting for the girls to cross Highway 116, a couple of miles south of Hinesburg Community School.

Video footage from the bus’s camera shows the terrifying second when the middle schooler steps from the curb and into the road, a rushing truck whooshing past.

What the video doesn’t have is the sound of Avery’s scream, just before Rieanna would have been hit, possibly killed or seriously hurt.

“It was a tone that my 12-year-old said she was not used to hearing and that caused her to hesitate and pull back,” said the girls’ mother, Tammy Murray. “She doesn’t know what made her step back. … She just felt this whoosh go by her face.”

The girls were so startled that they couldn’t give specific details about the truck.

They think it was a dark pickup.

But they’re not sure.

Tammy Murray said her daughters were in such a state of shock that it’s hard for them to remember.

It is unclear from the bus camera video, too.

The video shows the girls’ feet. One of the pairs of feet are just stepping into the road and then suddenly stepping backward into the snow.

In the dark morning light, the video shows a small portion of what appears to be a dark pickup truck moving past.

One thing is starkly clear – it misses Rieanna by inches.

Drivers shouldn’t pass a school bus going either direction, if the bus has its lights on and stop sign out, any time, said Champlain Valley School District Bus Driver Supervisor Ken Martin. “God forbid they run through the red lights and hit a child. Their life is ruined forever.”

Passing a school bus is so serious that even the police can’t do it when its warning lights are flashing and stop sign is out – whether they are approaching the bus from behind or passing in the other lane going in the opposite direction.

One more time for emphasis: When a school bus is stopped and its warning signals are flashing, all traffic is must stop, going both ways.

“I can go down a one-way street at 60 miles per hour, if I exercise due discretion,” Lindemuth said. “But I can’t go around a bus if the bus has its red lights on.”

“Authorized emergency vehicles shall come to a full stop when approaching a school bus which is flashing red lights and may proceed only when the flashing red lights are extinguished,” says 23 V.S.A. § 1015 of the Vermont statutes pertaining to exemptions for emergency vehicles. All the rest of this section deals with exemptions, except for school buses.

Shelburne Police Chief Aaron Noble said people illegally passing school buses has been a problem forever. Recently his department has assigned an officer to Shelburne Community School in the mornings and afternoons, in part to work on school bus safety.

Since he took the duty, Officer Kyle Brooks has followed school buses most mornings. In two weeks, he’s had an incident where two vehicles passed a school bus with its stop sign out and red lights blinking on Shelburne Road, just north of Harbor Road.

He managed to stop both vehicles, and both drivers told him they didn’t see the school bus.

“It’s a stop sign. It’s hanging out. It’s a big yellow bus with red lights,” he said. “It seems pretty straightforward to me.”

Brooks said it had to be distracted driving, but he didn’t know what the distraction was. “I didn’t see a cell phone in their hands. … It’s just one of those mysteries.”

Hinesburg Police Chief Anthony Cambridge recalled Martin saying at Champlain Valley Union High School’s Safety Committee that, with the new cameras installed on the buses, he was surprised to see how many vehicles were passing stopped school buses.

“So, we knew we had a problem,” said Cambridge.

This impression was confirmed last week when Lindemuth was summoned to Hinesburg Community School because of a confrontation between a motorist and a bus driver. The motorist was upset, the incident report says, “because the bus driver was too aggressive with him” when he confronted him about passing the bus in the school’s bus lane while its lights were flashing and stop sign was out.

The driver incorrectly believed that the laws about not passing school buses didn’t apply on school property.

It sounds like bus drivers are really tired of this situation, said Lindemuth. “The perception of the bus drivers is it’s out of control. All of them are passed by cars. It’s multiple times a day sometimes.”

He said that Hinesburg police have conducted three “directed patrols,” a sort of a rolling stakeout focused on enforcing school bus no-passing laws.

“People should know that on a near daily basis that’s going to keep on happening,” said Lindemuth. “As a former school resource officer who cares about the safety of kids, it is something I’m personally going to enforce. We’re going to get back to the standard in Hinesburg. Nobody should doubt that we’re going to stick to this.”

And the repercussions for someone who is caught will be painful. The hurt will be much more than $249 ticket. – five points can be added to a license, said Lindemuth, which is halfway to suspension.

He said, “By the time you’re done with insurance, that’s going to be a much bigger expense than $249.”

Pass the bus, get busted

Last week, The Citizen investigated commuters driving past school buses, stopped with their lights flashing and their stop sign out.