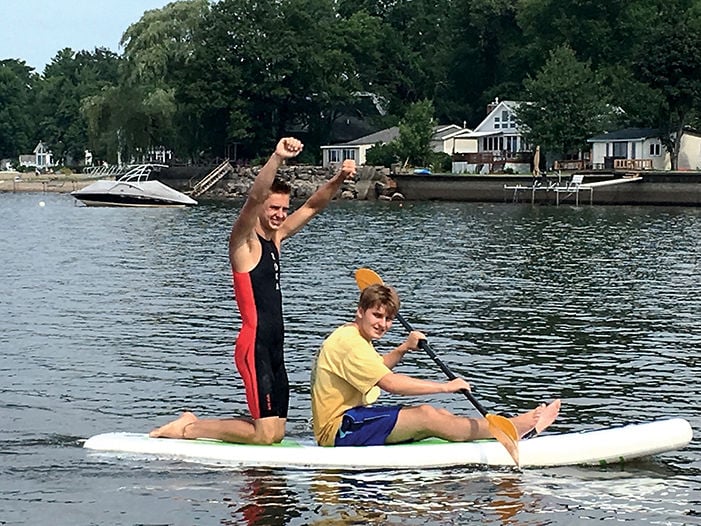 Hinesburg teen Geo DeBrosse raises his arms in victory after swimming the width of Lake Champlain Tuesday morning. Supported by his friend Seb Jacobs, right, on a paddleboard, as well as his parents and neighbors, DeBrosse covered roughly 7 miles in 3 hours and 45 minutes. 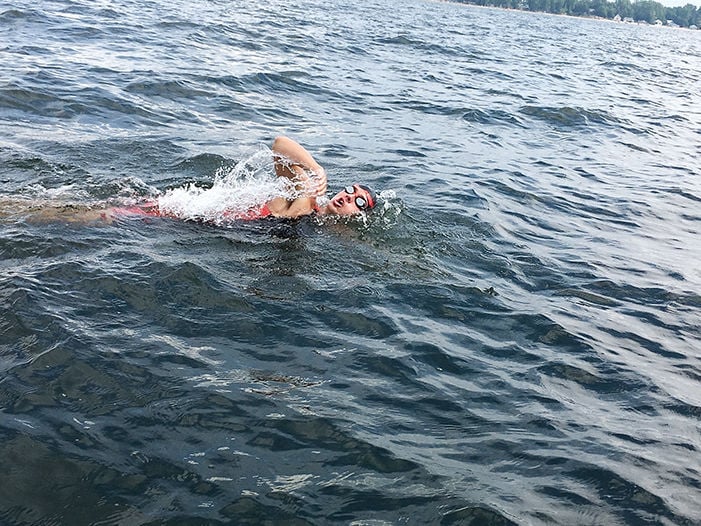 Geo DeBrosse in action as he swims across the lake. Conditions were less than ideal, with1-2-foot waves and winds at 10-15 knots.

Hinesburg teen Geo DeBrosse raises his arms in victory after swimming the width of Lake Champlain Tuesday morning. Supported by his friend Seb Jacobs, right, on a paddleboard, as well as his parents and neighbors, DeBrosse covered roughly 7 miles in 3 hours and 45 minutes.

Geo DeBrosse in action as he swims across the lake. Conditions were less than ideal, with1-2-foot waves and winds at 10-15 knots.

A journey of a thousand miles, or six, begins with one stroke.

Geo DeBrosse, 15, of Hinesburg, swam across Lake Champlain Tuesday morning from Port Kent, N.Y. to Delta Park in Colchester. The competitive swimmer covered the lake’s 6 miles in 3 hours and 45 minutes.

The swim was a team effort. Geo had a flotilla of support that included his mom, Suzie McCoy, in one boat, his dad John DeBrosse in another, and neighbors  in a third boat. Another key player was good friend Seb Jacobs, who was on a paddle board alongside Geo the entire way offering a place to rest and eat snacks to keep up his energy.

Geo almost turned back. Although the team waited for a good lake forecast with calm winds, conditions were not as expected. The air and water were 70 degrees, McCoy said, but the lake was rough with 1-2 foot waves and winds at 10-15 knots.

“There were more waves than ideal, but Geo persevered” McCoy said. “He’s a right-side breather, and that’s the side the waves were coming from, so every few minutes he’d get a mouthful.”

That’s what led the teen to get out a mile in, then decide to press on.

“I got in and started the swim and noticed the waves were destroying me,” he said. “I was about a mile in and I got out. Then I thought, ‘What if I pulled this off today? That would be bragging rights.’”

So he got back in the water and finished what he started.

“I was just so grateful to be there,” McCoy said. “I jumped in midway and did a .91-mile solidarity swim and he dusted me.”

The swim was Geo’s 8th grade graduation project from Hinesburg Community School last spring. He had to research all the variables involved in a long distance lake swim, then plan it for after his summer swim season. Geo swims competitively for YMCA Dynamo in the winter and the Burlington Tennis Club in the summer. He will attend CVU this fall as a ninth-grader in the Fairbanks House.

Geo is not a long-distance swimmer. In fact, he’s a sprinter. He just won first place in the state for 50-meter butterfly in his age group this past weekend. He also placed third in 100-meter freestyle and 100-meter fly.

So when his mom mentioned that they’d all learned a lot for next year’s swim, her son replied, “Who said I’m doing this next year?”

“I think it’s like childbirth,” McCoy said. “You forget the pain, but it was amazing.”

Geo spent a long time in the hot tub after his swim eating pie and ice cream, and was still sore Wednesday. Although the lake is 6 miles across where Geo swam, he said he covered 7 miles due to zigzagging.

He thanked his parents, the Hollys and his friend Jacobs for their support. Then he was asked if his mom was right, that he might swim the lake again.

“No,” he said quickly. “That went through my head once, and then nope. Once I got to the shore, that was it. It’s off my bucket list. I’m never doing that again, but I’m glad I did it.”

The Feb. 24 selectboard meeting only had one item on the agenda, generating a focused discussion concerning the Memorandum of Understanding with Champlain Valley School District for city elections.

Forester for a Day

Clad in hard hats a group of 11 possible future foresters (ages 5 and up) and their parents trekked through snow to a patch of trees at Shelburne Farms, where groundskeeper Travis Bessette discussed why the tree to be felled was chosen and how he would alter the course of the fall with wedges – in order to cause the least damage to the smaller surrounding trees.

If the state of Vermont had gotten its way Don Stevens never would have been born.

Logger. Storyteller. Writer. Master of backwoods similes and metaphors. Bill Torrey had around 65 people laughing as he recounted stories of his years in the Vermont woods.