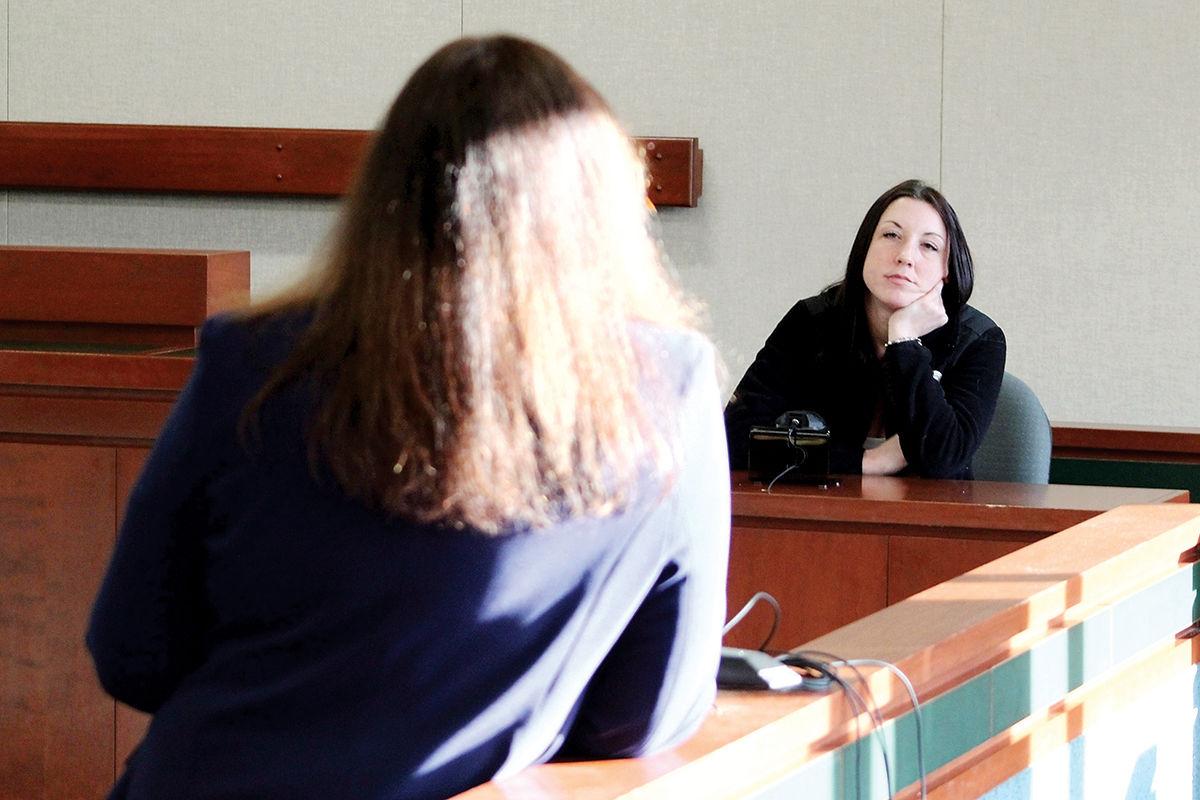 Amanda Spinks testifies that she had heard Kory George and his mother Angela Auclair plan the murder of David Auclair. 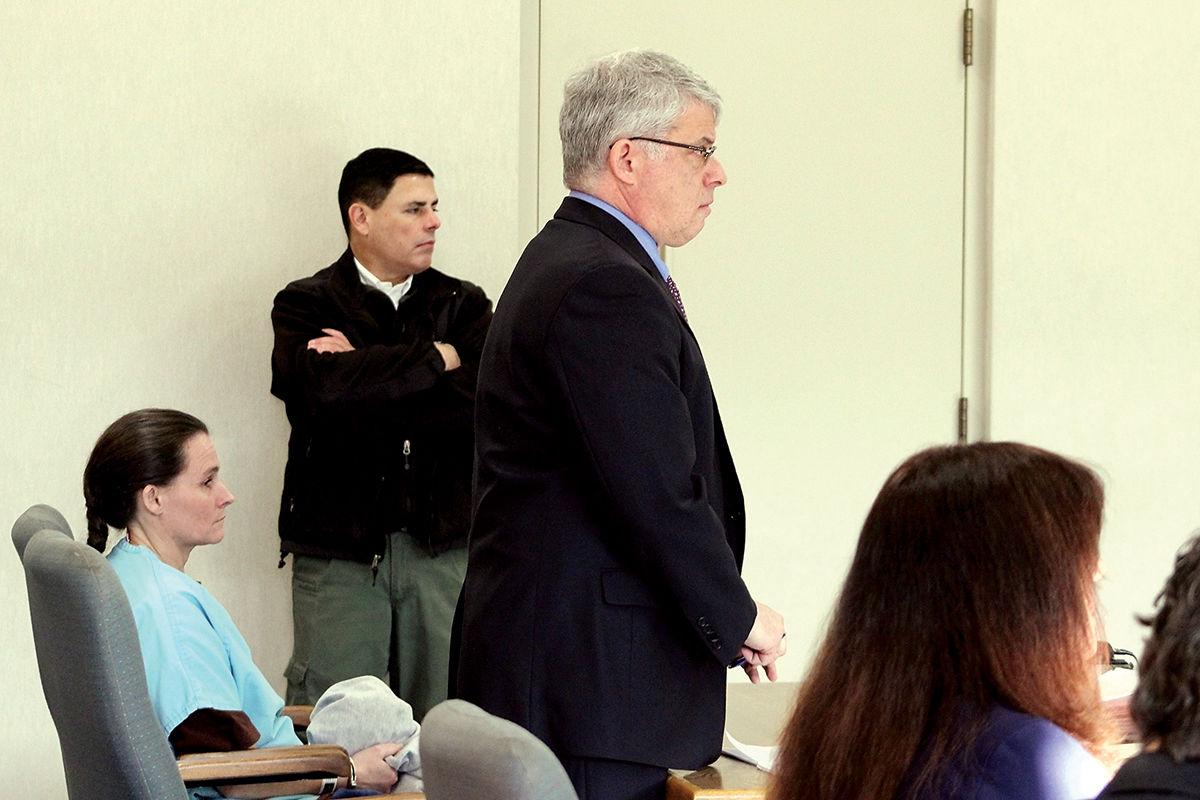 Angela Auclair looks on as her attorney Robert Sussman questions a witness. 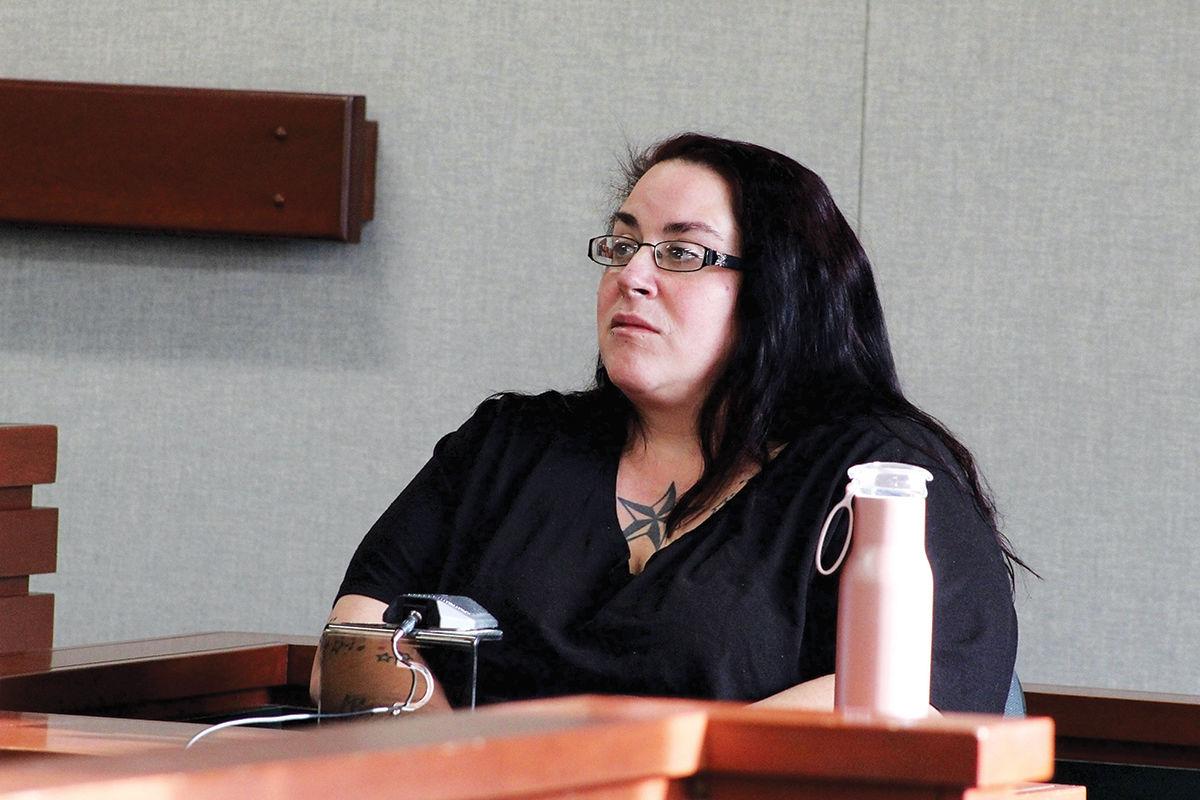 Meaghan Parrott testifies about Kory George and his then girlfriend, now wife, Kristin (Stillwell) George visiting with her the night that David Auclair was killed. 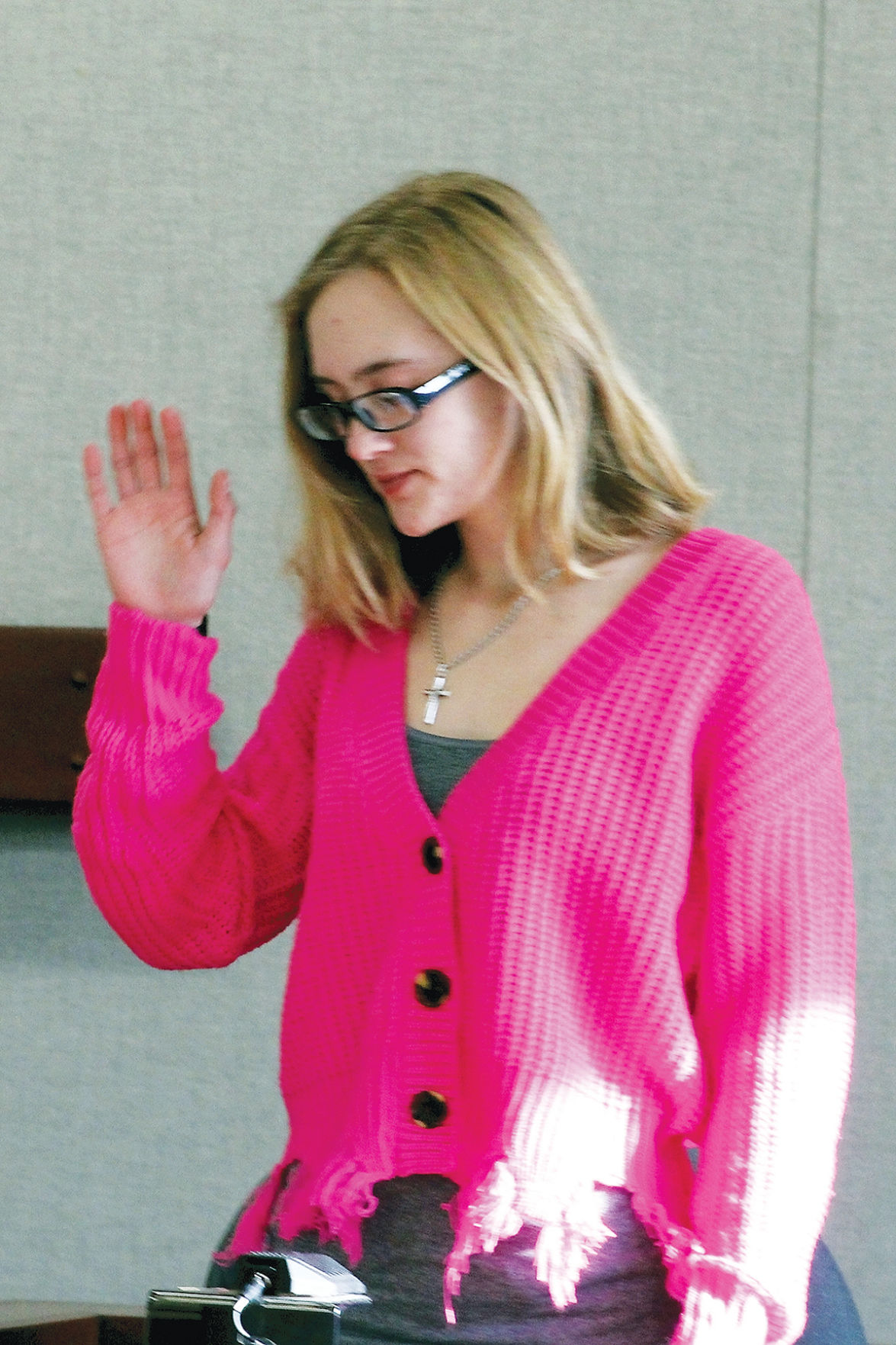 Kristin George is sworn in before testifying about dropping off Kory George in Colchester the night that guns were stolen from a home. Police allege that one of those guns was used to kill David Auclair.

Amanda Spinks testifies that she had heard Kory George and his mother Angela Auclair plan the murder of David Auclair.

Angela Auclair looks on as her attorney Robert Sussman questions a witness.

Meaghan Parrott testifies about Kory George and his then girlfriend, now wife, Kristin (Stillwell) George visiting with her the night that David Auclair was killed.

Kristin George is sworn in before testifying about dropping off Kory George in Colchester the night that guns were stolen from a home. Police allege that one of those guns was used to kill David Auclair.

Angela Auclair will not be getting out of prison on bail in 2019, and at least two witnesses in the case are relieved – for the time being.

On Monday, Dec. 23, an evidentiary hearing in Vermont Superior Court was adjourned with witnesses still to be called.

Another date to finish the hearing couldn’t be scheduled until at least Jan. 13 because the judge and defense attorney Robert Sussman are unavailable until then.

More than 15 people gathered in the small courtroom for the proceedings – the audience included family, friends and George’s lawyer, Public Defender Margaret Jansch.

Judge A. Gregory Rainville introduced the case saying the state was arguing Angela Auclair should be held without bail and that this case was a hearing on that issue. He said that the charge of aiding and abetting in the murder “has the potential of a life sentence.”

The body of David Auclair, 45, was found – with nine bullet holes in his body – off Gilman Road in Hinesburg at about 10:40 p.m. on July 11, state police said. It appeared that he had been trying to crawl under his truck to get away from his shooter.

Estranged but still together

At Monday’s hearing, George’s ex-girlfriend Angela Spinks was the first to testify. She said she had known the Auclairs and George for 17 years. Spinks said she lived with Kory Lee George for several months on Cat Tail Lane in Monkton, which is 2 miles from Hinesburg’s LaPlatte Headwaters Town Forest parking lot where David Auclair was murdered.

The home on Cat Tail Lane was also the home where David and Angela Auclair both lived, but in separate bedrooms on different floors of the house.

Spinks said that the Auclairs’ “wasn’t a happy marriage,” and that Angela Auclair would “sneak” her boyfriend John Turner in. George and his father’s relationship “had its issues” and “its ups and downs,” Spinks said.

Sussman repeatedly objected to the testimony on the grounds that it was hearsay.

“Your Honor, it’s the State’s position that how cordial were Kory and David Auclair goes directly to motive to why they ended up killing him,” said prosecution lawyer Susan Hardin.

The testimony was allowed, and Spinks said that George’s were “mixed feelings” for his stepfather.

Spinks testified she was in Angela Auclair’s vehicle when George and his mother had a conversation about killing David Auclair. Spinks said the mother and son talked about George getting a gun and a burner phone and planned how he would do it.

They would use a burner phone so the police couldn’t trace it, Spinks said.

George was going to use the burner phone to call David and tell him “that he was in distress or needed help with his bike or vehicle,” she alleged.

She said Kory would use his motorcycle “because it’s easiest to get away.”

“If the court were to release Angela Auclair into the community after this hearing, would you have any concerns about that?” asked Hardin.

“I’m leaving the state,” said Spinks, “because I’m sure she’ll come for me next.”

Spinks began to sob and the judge called for a recess.

Stillwell, 18, was Spinks’ babysitter, according to testimony. She and George were married on Aug. 16 around a month after his father’s murder.

“Did you make up this story about hearing this conversation between Angela Auclair and Kory George because Kory George married Kristin Stillwell?” Hardin asked Spinks.

“I’m better off without him. Are you kidding me?” said Spinks.

Later in the hearing, a second witness began to cry on the stand.

Meaghan Parrott testified that on the night of July 11, George and Stillwell had visited her at her home. She described buying some ammonia for George. She said he wanted to use it to wash off gun powder residue because he’d been teaching Stillwell how to shoot.

Hardin produced an anonymous letter which Parrott said she’d received which was just signed with a “T.”

The judge admitted the letter into evidence, although Parrott said she didn’t know who sent it.

“After reading the letter, were you concerned for your safety?” asked Hardin and Parrott said she was, as she began to cry.

“If the court releases Angela Auclair would you have any concerns about that?” asked Hardin.

She said her concern was based on the letter: “I juggle my life around because of it. I don’t keep my daughter at home. I make sure she’s where it’s safe. I switch locations of job and I switch my vehicles.”

Kristen Stillwell, who was not yet Kristen George at the time of the alleged crime, testified that the night before David Auclair’s murder she, Turner and Kory George went to Colchester so Kory could run an errand for his mother. They dropped Kory off.

After driving around, they returned, and Kory George rejoined them. He still had the backpack he’d taken with him.

Police say that video and electronic evidence shows that the Colchester home of James Synott, who also testified Monday, was robbed on July 10, while Synott was having dinner with David and Angela Auclair at the Lighthouse Restaurant in Colchester. Three guns were stolen including a 9-mm Beretta that was used to kill David Auclair the next night.

“Is it true that you said to her at one point, ‘I can’t wait to arrest you’?” asked Sussman.

Kory Lee George has pleaded not guilty to three charges in connection with the shooting death of his stepfather five months ago in Hinesburg.

In a 4-0 vote, Hinesburg selecboard members approved revisions to the town’s official map and zoning regulations on Wednesday, Feb. 5.

For questions and additional information hinesburgrec@gmavt.net or 482-2281 ext. 230

After much work and tough cuts to some desirable programs, the Hinesburg Selectboard approved a proposed town budget with almost $4.2 million in expenses on Wednesday, Jan. 29. They also approved a strategy for ambulance service to send to the voters at Town Meeting. If approved, this budget will be a 5.85% increase over the previous year’s budget expenses of more than $3.9 million.