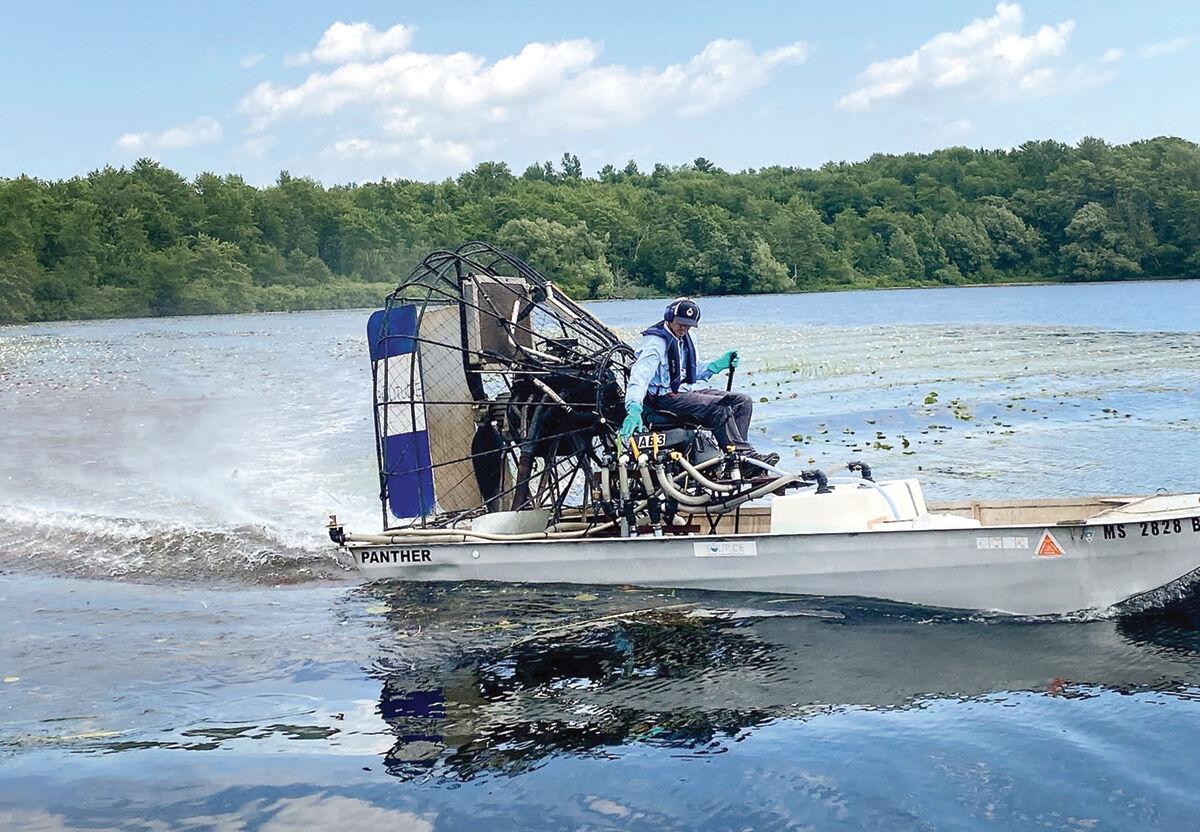 Marc Bellaud of SOLitude Lake Management, an environmental firm based in Massachusetts, applies the herbicide ProcellaCOR using an airboat. 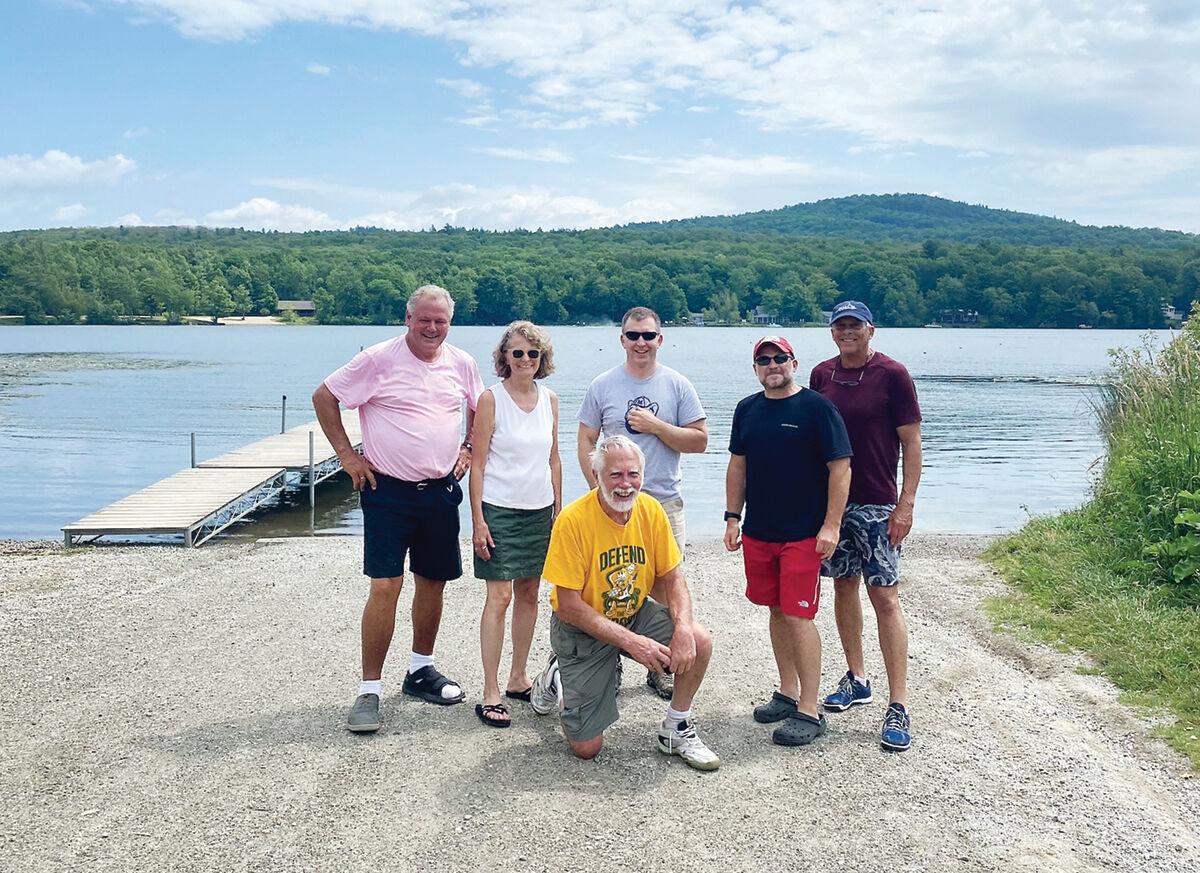 Members of the Lake Iroquois Association turn out to oversee the application of a herbicide to eradicate invasive milfoil. 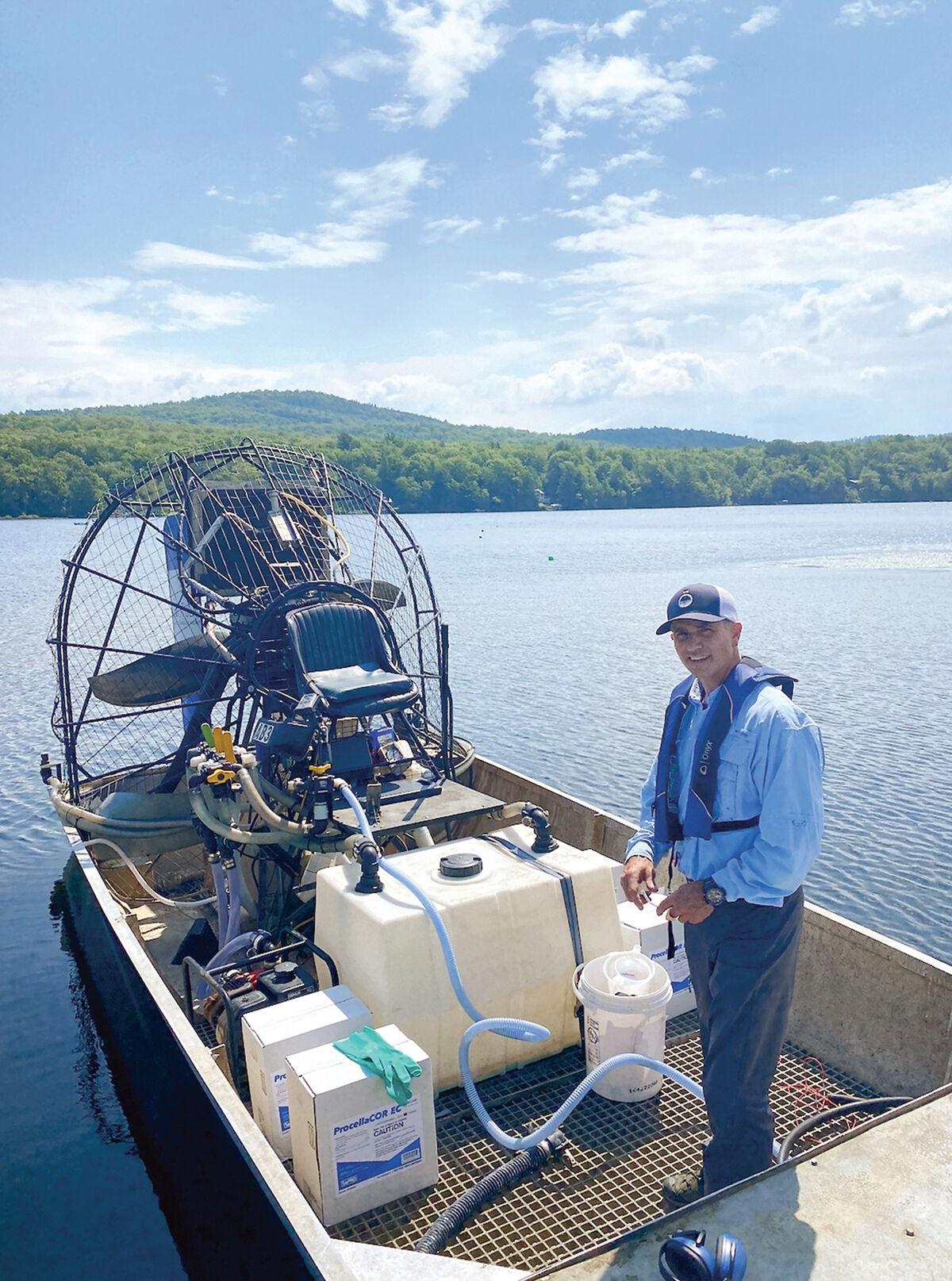 Marc Bellaud gets ready to take out is air boat to apply the herbicide.

Marc Bellaud of SOLitude Lake Management, an environmental firm based in Massachusetts, applies the herbicide ProcellaCOR using an airboat.

Members of the Lake Iroquois Association turn out to oversee the application of a herbicide to eradicate invasive milfoil.

Marc Bellaud gets ready to take out is air boat to apply the herbicide.

Milfoil — an invasive weed that forms dense mats of vegetation and readily reproduces when boats chop it up — may soon be tamed in Lake Iroquois after recent treatment with an herbicide.

At least that’s the hope of members of the Lake Iroquois Association who gathered at the lake’s boat launch recently to watch and celebrate the herbicide application that was seven years in the making.

Eurasian watermilfoil first invaded Lake Iroquois decades ago, and by 2014 the scale of the infestation has steadily increased, and the association began to research options, undertake a full lake plant survey, and develop an action plan, says its former president and current secretary, Pat Suozzi.

In March 2020, the two groups filed a permit request to treat Lake Iroquois with the chemical herbicide ProcellaCOR. The request was approved in February by the Department of Environmental Conservation, after an earlier, 2018 application for a different herbicide was denied.

Obtaining the permit was a slow and challenging process, association members said, and it requires an annual renewal.

The herbicide was administered in late June by Marc Bellaud, president of SOLitude Lake Management, an environmental firm based in Massachusetts. The process took just under two hours.

Bellaud used an airboat, a specialized craft engineered to perform the treatment.

“The system pulls water in from the lake, into this tank, and then the herbicide gets diluted in with the lake water, and then those valves change the flow and end up sending the product back out through hoses that come out the back of the boat under the water,” Bellaud said. “There’s no aerial spray, everything’s just injected subsurface.”

Once the herbicide is injected, milfoil will quickly absorb the product and shut down almost immediately, Bellaud said. Over the course of the next two to three weeks, the milfoil will begin to collapse and decompose at the bottom of the lake.

The airboat is utilized for this task because there is no propeller in the water that destroys the milfoil, which would be a disturbance to the treatment process.

These surveys will be conducted by Waite-Heindel, an environmental firm in Burlington.

“ProcellaCOR has been pretty rigorously tested. We’ve used it quite a bit in Vermont already, I think it’s only had its full EPA registration since, either 2018 or 2019, but it went through the reduced risk protocol with EPA,” Bellaud said.

A handful of lakes in Vermont have been treated with the same herbicide, including Lake Courtonia in Rutland, Lake Dunmore in Addison County, and Lake Pinneo in Quechee,

“We’ve had an amazing track record with it since it came out, and I think the fact that it’s a reduced risk product with EPA gives people a lot of confidence. It is a pretty safe product for wildlife and humans,” Bellaud said.

Suozzi reinforced the safety of using the herbicide.

“It’s targeted narrowly to milfoil, and it’s been shown to be nontoxic to wildlife, in fact, there are no restrictions from the department of health or department of agriculture. They found no toxicity, it does not bioaccumulate, and it is not carcinogenic,” Suozzi said. “So, we don’t expect to see any effect at all on wildlife and the lakes that’ve been used over the last couple of years in Vermont have seen no effect.”

Jack Linn, a Richmond resident since 1978 and a Lake Iroquois Association member, loves the wildlife at the lake, especially loons.

“There are only 90 nesting pairs in the state of Vermont,” Linn said. “They are an indicator of a healthy lake; you can’t have loons and have an unhealthy lake.”

Linn said that this is the third year that loons have nested at Lake Iroquois, and that the herbicide will help expand the fish population by creating more space, which will indirectly protect the loons, who need fish.

“I’m pretty excited that we are finally moving forward and really doing something that’s really going to make a difference,” Suozzi said as she watched the airboat loop around the lake.

In 2016 and 2018, the association attempted a method where divers manually pull out the milfoil by its roots and feed it into a suction tube to reduce its concentration near heavily trafficked boating areas.

“It’s taken us seven years to get to this point, I started working on this project in 2014. I mean, we began the research, we began the plant surveys, and we began fundraising about five years ago and asking for donations,” she said. “Everything that we’ve done it’s been done totally by volunteers and volunteer hours.”

The total cost of the herbicide application project was around $60,000, solely raised through fundraising.

“It’s been an amazing process. We appreciate the process, but it’s really been a long haul,” he said.

The association now has its sights set on new projects to maintain Lake Iroquois. It received grant funding from the Lake Champlain Basin program for a watershed action plan, where it will join forces with the Lewis Creek Association and Winooski Natural Resources Council to study the watershed of the lake and develop future plans, Suozzi said.

“Can you understand the deep amount of hurt and pain that this might have caused, but do you have any empathy at all?”

Elizabeth Deutsch of Hinesburg got cut off during the May 6 Zoom selectboard meeting, while commenting on Lake Iroquois’ milfoil problem.