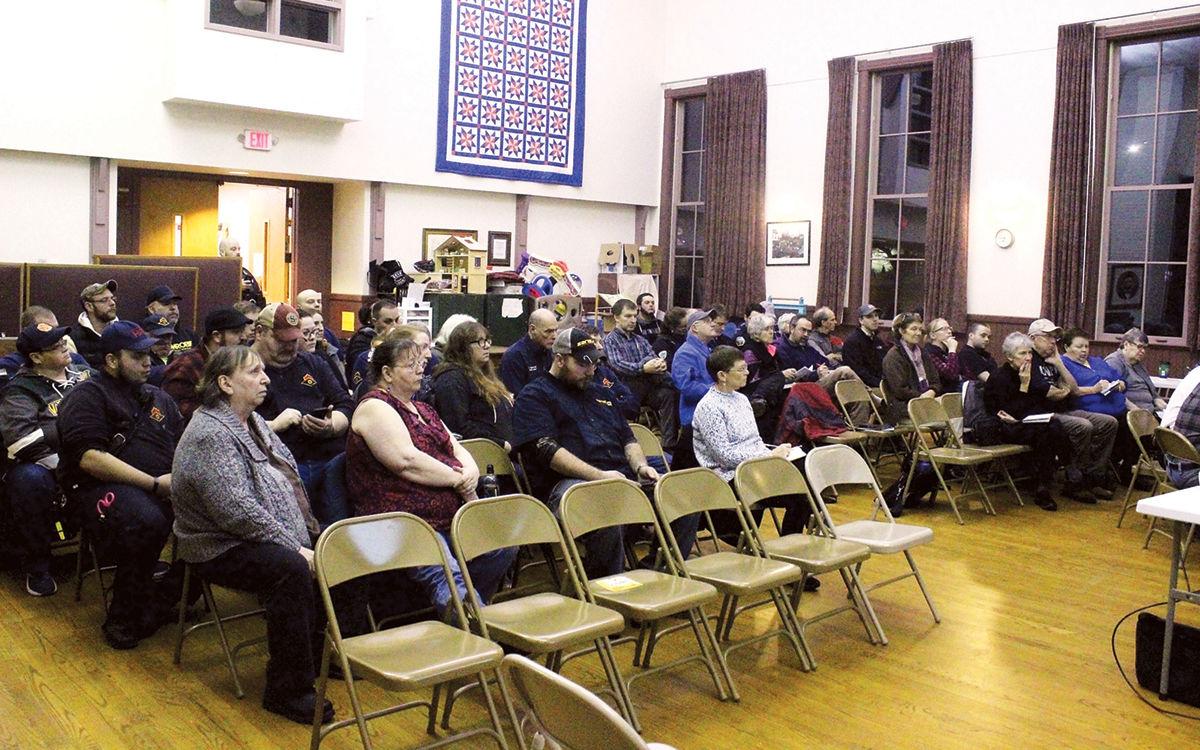 At least 50 people showed up for the Hinesburg Selectboard meeting on Wednesday, Jan. 15, to hear the discussion and presentations about what to do about ambulance service in town with the ending of service from St. Michael’s Rescue on June 30. 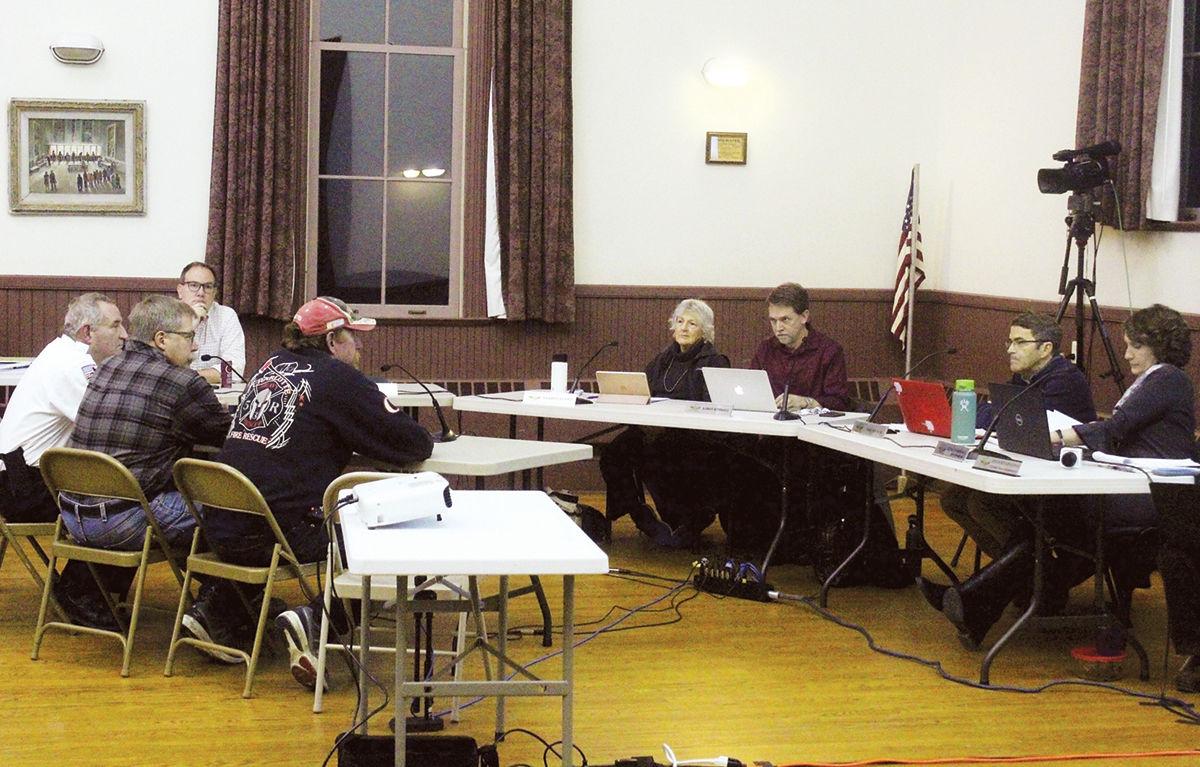 From left, Rob Mullin, Fritz Tegatz and Dick St. George make a presentation for having Charlotte Fire and Rescue provide ambulance service to the west side of Hinesburg.

At least 50 people showed up for the Hinesburg Selectboard meeting on Wednesday, Jan. 15, to hear the discussion and presentations about what to do about ambulance service in town with the ending of service from St. Michael’s Rescue on June 30.

From left, Rob Mullin, Fritz Tegatz and Dick St. George make a presentation for having Charlotte Fire and Rescue provide ambulance service to the west side of Hinesburg.

The Hinesburg Selectboard met upstairs in Town Hall on Wednesday, Jan. 15, so they would have a space big enough for the expected crowd to discuss what to do about ambulance service.

Expectations were met as around 50 people showed up, more than the downstairs meeting room would have accommodated.

St. Michael’s Rescue notified the town in January 2019 that it was going to stop providing free ambulance service to Hinesburg on June 30. The question of what comes next for emergency medical transport has been one of the town’s hottest topics for the past year.

Representatives from both Charlotte Volunteer Fire and Rescue and Richmond Rescue spoke about one option the town is considering – contracting with an established ambulance service from another town (or, in this case, towns).

Whether the town should start its own ambulance service will have been considered at a selectboard meeting on Wednesday, Jan. 22, after The Citizen’s press time.

On Jan. 15, the Charlotte and Richmond rescue services offered to split the coverage with Richmond covering east of Highway 116, with Charlotte covering the west – except for a loop to the east allowing Charlotte to cover Champlain Valley High School.

Charlotte is also proposing that it would cover the village of Hinesburg.

Charlotte Fire and Rescue Chief Dick St. George said the loop from Mechanicsville Road to the high school was added to the proposed area that Charlotte would cover because it would be a “selling point” to taxpayers, having their students covered by their rescue service.

Mullin said Charlotte received 473 fire and rescue calls last year and only had to turn over four calls to another rescue service. Just two of those were rescue calls. They were only out of service 17.5 hours last year because of mechanical or staffing problems.

By phone he said that other ambulance services in Chittenden County had been out of service for hundreds of hours during the past year.

Tegatz said the Charlotte Selectboard had discussed the proposal and viewed it not as a reduction in their service but an increase in income. Having been on the selectboard during the transition from a volunteer to a paid ambulance service, he said the transition was painful for the taxpayers to understand.

“My advice to anyone who is starting one would be to start from the paid perspective because the process of moving from one to the other is tough on the taxpayers who don’t understand,” said Tegatz.

“You can not look at fire and rescue as a busines, you must look at the business side of it and do your due diligence and recover as much as you can,” said St. George. “You’re not doing it for the money. You’re doing it for your people,” he said. “Ambulances aren’t cheap. They’re over $200,000 a pop. AEDs (automatic external defibrilators) are $22,000 a pop.”

Like Charlotte, Chiarella said the goal of Richmond’s proposal was to give Hinesburg an ambulance service option that could begin July 1, whether the agreement was for a year or for more.

Chiarella said besides three full-time employees their rescue service has 38 volunteers and a waiting list of 15 who would like to join as volunteers.

Selectboard member Jeff French asked why Richmond Rescue has a waiting list and Chiarella answered that they have been trying to lead the way in innovating new procedures and that has attracted recruits. Among examples he cited was their rescue service being a pilot program for high-performance CPR.

“That’s the equivalent of 12 full-time employees that the volunteers are giving us,” said Chiarella. “Last year we went on 676 calls and transported 420 patients.”

He said they had “turned over” about 4% of their calls.

“We’re proposing covering Route 116 and everything to the east of that at a $10 per capita rate which comes out to $35,000, which is about half the rate we’re charging our other towns,” Chiarella said.

If the agreement lasts for an extended time, they will bring down the rate of the other towns they cover so all are paying the same amount. Besides Richmond, they cover Bolton, Huntington, southern Jericho and northern Starksboro.

He said, “For $2 million I could put a station three minutes away from everyone’s house. Five stations in town and we can get an ambulance there in three minutes. But is it worth it? These are the questions you have to ponder.”

Lamberson, who used to be a member of Hinesburg First Response, said that their proposal relies on Hinesburg first responders “doing exactly as they have done for decades,” initiating care or CPR before an ambulance arrives. Often in critical cases, it takes 20 minutes before rescue or an ambulance starts to the hospital because it is difficult to administer critical care in a moving ambulance, so the patient needs to be stabilized. A member of the rescue squad begins the same care that an EMT (emergency medical technician) would administer, he said.

Chiarella said that their department has a subscription program where people within the coverage area have the option of paying $55 to be covered for any ambulance service. “We’ll still bill your insurance. Whatever they pay we’ll take, but there is no bill sent to the patient. Last year we sold just over 500 subscriptions.”

And like Charlotte, Chiarella said they also will never send someone to collections for an unpaid bill: “We want to make it so that people don’t have barriers to calling an ambulance.”

In response to a question from selectboard member Tom Ayer, Hinesburg Fire Chief Al Barber said the average time for an ambulance coming from St. Michael’s is 22 minutes. Chiarella said it would be about 16 minutes in all kinds of weather conditions for Richmond Rescue. By phone, Mullin said that Charlotte could reach the center of the village in 11-12 minutes.

In wrapping up the discussion, Pouech said they had known the meeting would be well attended. However, they’d anticipated it might be contentious, but it wasn’t at all.

He said that as they look at the local first responders, the local fire and rescue, they each person knows: “If on the way home, if something happens to me, there’s a bunch of people that don’t even know me – they’re going to come and help.”

In a 4-0 vote, Hinesburg selecboard members approved revisions to the town’s official map and zoning regulations on Wednesday, Feb. 5.

For questions and additional information hinesburgrec@gmavt.net or 482-2281 ext. 230

After much work and tough cuts to some desirable programs, the Hinesburg Selectboard approved a proposed town budget with almost $4.2 million in expenses on Wednesday, Jan. 29. They also approved a strategy for ambulance service to send to the voters at Town Meeting. If approved, this budget will be a 5.85% increase over the previous year’s budget expenses of more than $3.9 million.