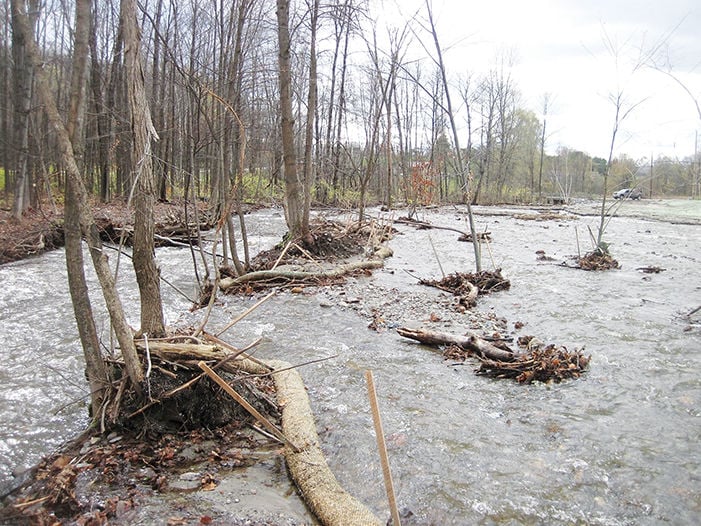 The floodplain renovation project on Beecher Brook was planned to withstand floods of this size, but the project’s planners just hadn’t planned for it to happen this soon. 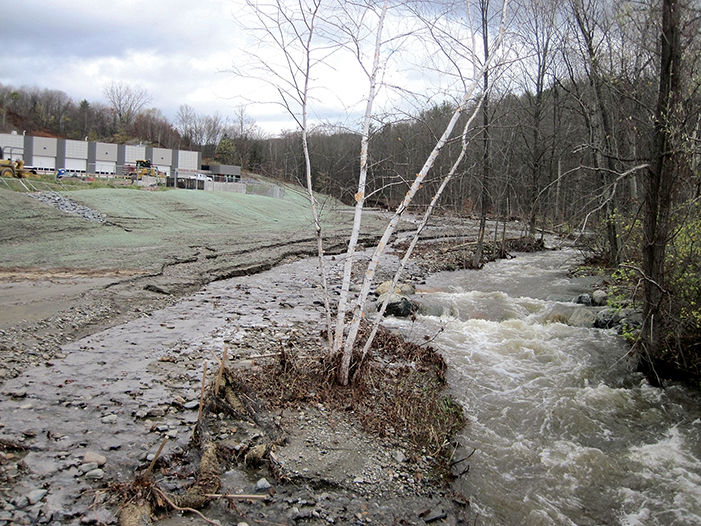 A new channel was created on the left by the flooding on Beecher Brook on Halloween, which is what those involved with the floodplain renovation project had predicted it might do.

The floodplain renovation project on Beecher Brook was planned to withstand floods of this size, but the project’s planners just hadn’t planned for it to happen this soon.

A new channel was created on the left by the flooding on Beecher Brook on Halloween, which is what those involved with the floodplain renovation project had predicted it might do.

After Halloween night’s flooding, driving up Beecher Hill Road in Hinesburg past the landscaping and reshaping of the banks of Beecher Brook, residents may be dismayed to see that the stream has cut a new channel and deposited mud on the slope. They might think all the recent floodplain restoration work was washed away.

“We were pleased to see that the brook did just what it was supposed to do,” said Kate Kelly, program manager for the Lewis Creek Association, which has been overseeing the Beecher Brook flood plain restoration project. “The river readjusted the way we would anticipate.”

A major part of the flood plain restoration was excavating dirt along Beecher Brook on the southeast side of the Hinesburg town garage and the site where the Chittenden Solid Waste District drop-off center is being built. The Dale E. Percey excavating company sculpted the area so the floodplain sloped down to the stream.

The most obvious change to the landscapers’ work is that the stream cut a wider channel on the drop-off center side of the stream. But that doesn’t concern either the Lewis Creek Association or the project engineer. In fact, it’s what they predicted the stream would do – just not so soon.

“If the stream wants to skip around and have the channel there, that’s sort of natural for rivers to move,” said Kelly. “We’re pleased to see the river using the floodplain the way we’d hoped.”

Jessica Louisos, the project engineer with Milone & MacBroom, said she was a bit nervous before she got to the site because it was designed to stand up to flooding, but to get the magnitude of flooding they expect at least once every two years within weeks of finishing most of the landscaping was unexpected.

“I was really pleased to see the floodplain working so well,” Louisos said.

They had saved a number of the trees that were on the site and replanted them after the grading was done. Louisos said they might have lost a couple of trees, but almost all the rest looked to be in good shape. They will plant around 400 more trees in the spring, all native species such as maples and birch.

“We’ll revisit it in the spring and see what the river has decided to do and do our plantings in the way the river has settled out there,” Kelly said.

Merrily Lovell felt honored when, three years ago, she was elected to the Hinesburg Selectboard.

The Hinesburg Selectboard met upstairs in Town Hall on Wednesday, Jan. 15, so they would have a space big enough for the expected crowd to discuss what to do about ambulance service.

It was a busy year for students at TaeKwon Do KICKS classes in Hinesburg. Filled with tournaments, break-a-thon and promotional testing, Master Kellie Thomas said many students have also earned their black belts.