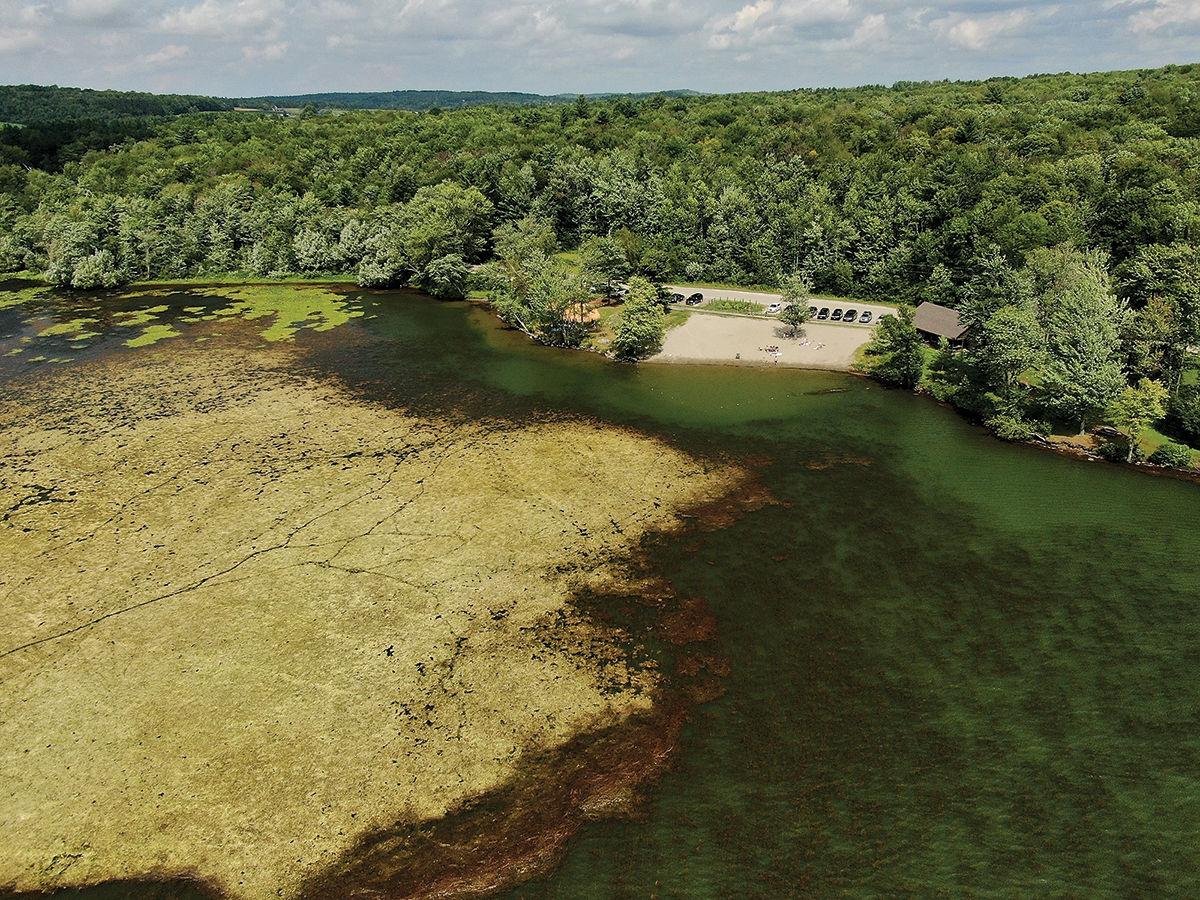 Aerial views of Lake Iroquois show the full extent of the milfoil invasion. 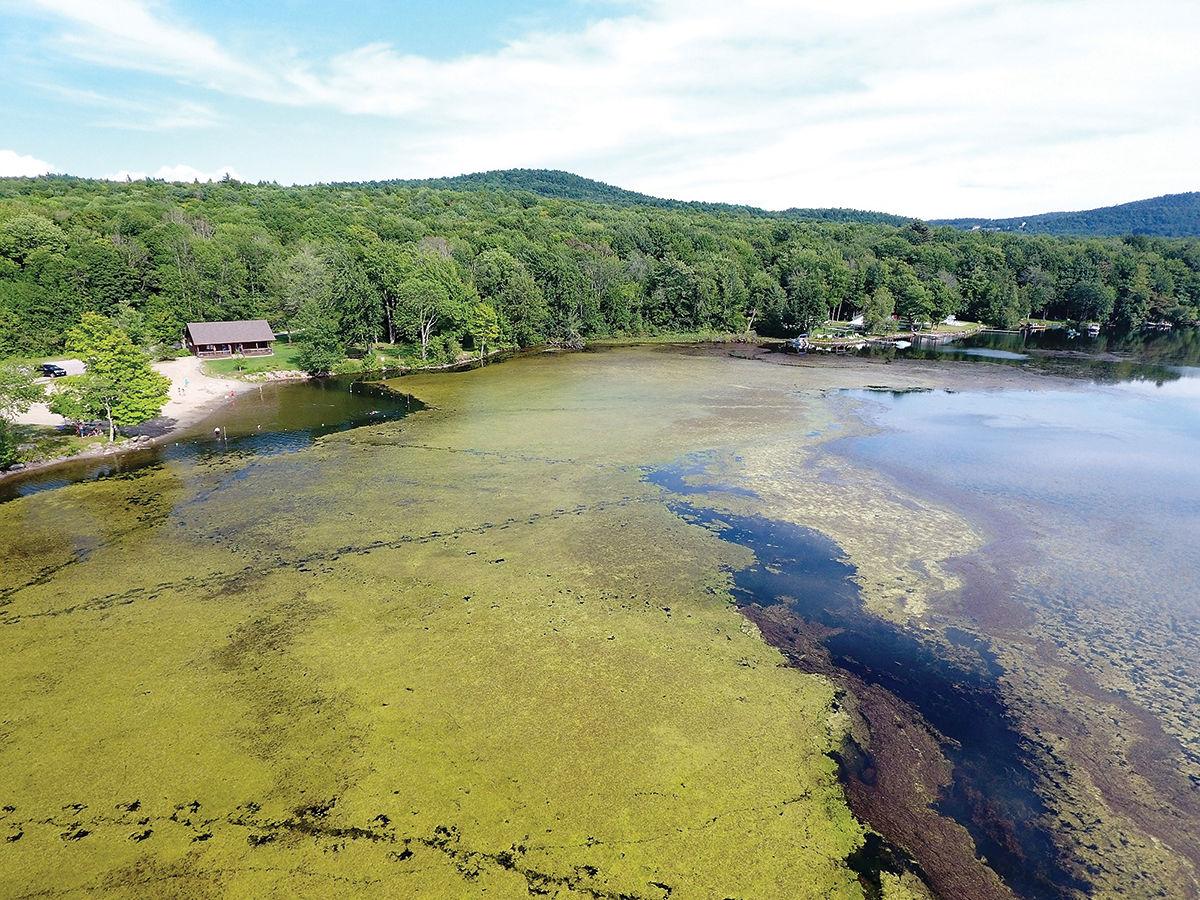 Aerial views of Lake Iroquois show the full extent of the milfoil invasion.

It’s not exactly a botanical Dracula that grows on the bottom of Lake Iroquois – and too many other lakes in Vermont. In fact, Eurasian milfoil may be worse than a vampire, if that’s possible, because it spreads with a vehemence that would make the prince of darkness green with envy.

And milfoil doesn’t have the weakness of that mythological creature; there is no silver bullet or stake that can be driven through its heart to kill it once and for all.

The other thing that the invasive plant has on vampires – milfoil is real.

Speculation is that Eurasian milfoil came to the United States on boat hulls, or perhaps in aquariums, some even say that it was introduced to lakes as fish habitat.

It has proven particularly difficult to get rid of because it regenerates from both seeds and pieces of the plant.

So, when it’s pulled up if any pieces break off, just like in any horror movie, it often isn’t killed but spreads.

“I’m not going to lie to you: We’re in a crisis,” Chris Conant of the Lake Iroquois Association told the Hinesburg Selectboard meeting on Wednesday, Nov. 20. He came to the board to ask for Hinesburg’s support in the fight against the invasive plant that has taken over 70% of the lake.

He requested that the selectboard increase the association’s allotment in the town’s budget to $15,000. It had been $7,500 for several years.

Conant also came with the news that the Lake Iroquois Association is applying to the state Department of Environmental Conservation (DEC) for permission to use a new herbicide called ProcellaCOR in the fight against milfoil.

A couple of years ago, the association asked the DEC for permission to use another herbicide called Sonar.

Selectboard member Merrily Lovell said that the last application for Sonar was very controversial in Hinesburg: “I would think this also needs to be a Town Meeting vote because a lot of people will be impacted, and people are very sensitive about their health.”

That application did pass the Hinesburg Town Meeting, but was rejected by the Vermont Department of Environmental Conservation in October 2018.

The Department of Environmental Conservation’s decision was frustrating and confusing to Conant, because, he said, the department had been involved with planning for the use of Sonar and had approved its use on other Vermont lakes.

“They allowed other lakes but not Lake Iroquois. They kept saying that they only used scientific evidence to make decisions,” Conant said in a phone interview.

Selectboard chair Phil Pouech said that during the previous request the selectboard decided that they were “a little unsure” about whether to approve it, and it became a warned item for the Town Meeting.

Conant said that he is optimistic about the state’s approval for ProcellaCOR to be used at Lake Iroquois because it has already been approved and used on four Vermont lakes and across the country.

“The four lakes in Vermont that used it in 2019 have shown amazing results and have shown immediate results within a few weeks,” he said. “ProcellaCOR is being marketed as requiring a very small dose and as an herbicide that does not harm native plants. It’s been approved by the Department of Health and the DEC.”

No quick fix for milfoil problem

The Lake Iroquois Association is also requesting $15,000 from Williston and $1,000 from Richmond, which has already contributed $3,200 for a survey of the lake.

With 70-72 of the 92 properties on 249-acre lake, Hinesburg has the lion’s share of the Lake Iroquois’ properties, Conant said.

He told the selectboard that to get the milfoil under control it will take five years and around $150,000. Lake Saint Catherine, which is about four times larger, has budgeted $250,000 for five years.

ProcellaCOR is just one of the tools he said the association, working closely with the Lake Iroquois Recreation Department, plans to use.

Conant said that even if the ProcellaCOR is approved and budgeted it won’t be a silver bullet because, “we’ve been told that we’re never going to be able to eradicate the weed completely, but we do realize that if we don’t get it under control we’re never going to gain control of the lake.”

Even if the herbicide is approved and the funds are found, it will only be permitted for use on 40% of the lake.

Conant said DEC doesn’t limit the use of ProcelleCAR to 40% of the lake for health reasons but for environmental and ecological reasons and also as a way to ensure that it’s being used in a conservative way.

“I was in support of the last application. I’m in support of this one,” selectboard member Tom Ayer said. “We used to water ski out there all the time. I wouldn’t even think of it now. It’s terrible. And it’s detrimental to the other plants and fish and birds in the lake because of this one plant.”

Conant said, “That’s why we do the plant survey every few years. It tells us how many species we’ve lost.”

Lovell said that the area around the boat launch looked pretty clear because of the benthic mats that had been used there. Benthic mats are laid on the bottom of a body of water to kill plants. But Conant said it hadn’t just been the mats, that they had also spent money on hand-pulling milfoil.

Simply pulling up the plants does not solve the problem, either. Besides being expensive, it kills other plants that get yanked out with the milfoil during the weeding process.

AB Aquatics, a contractor based in New Hampshire that works on invasive plants around New England, pulled milfoil on the lake this year. When the contractor was finished, he said Lake Iroquois was the worst milfoil-infested lake he had seen, according to Contant.

By phone he relayed stories of rescuing a swimmer and a couple of sail boaters who had been entangled in the milfoil near his property and fought to the point of exhaustion to get free before he could pull them out with a rowboat.

“What we need is a fish that loves milfoil,” said Lovell.

She was joking, but doesn’t that sound like the premise for a great horror story? “Milfoilnado” or “The Creature from the Green Mountain Lagoon” perhaps?

One side of controversial issue

I was very disappointed to see the highly dramatized article about the “Hinesburg Horror story” (The Citizen, Nov. 27, 2019) related to the pr…