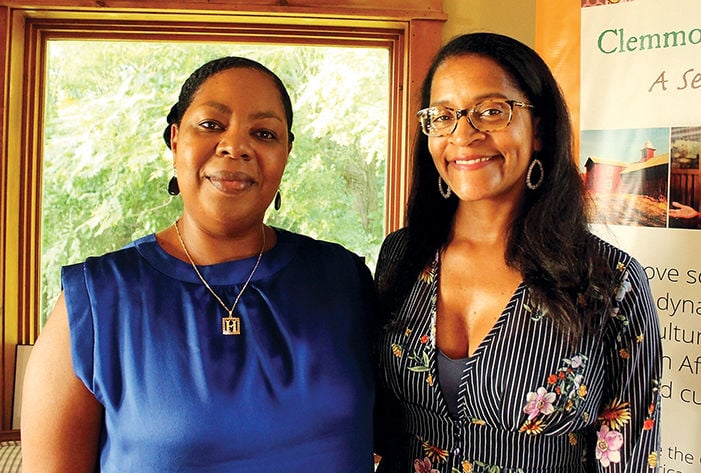 Emily Bernard author of ‘Black Is the Body’ and UVM professor of English and Critical Race and Ethnic Studies and Wanda Heading-Grant, UVM Vice President for Human Resources, Diversity and Multicultural Affairs discussing Bernard’s book with about 30 people at a reading at the Clemmons Family Farm in Charlotte. 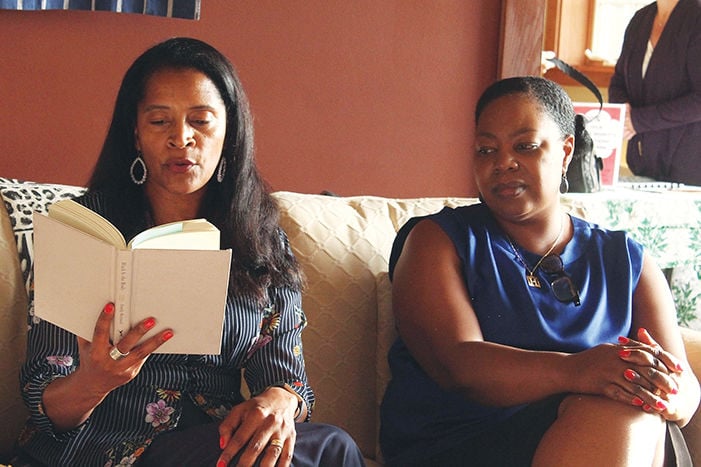 Author Emily Bernard, above, said that some of her book ‘Black Is the Body’ was written in the room where the reading took place at the Clemmons Family Farm on Sept. 14.

Emily Bernard author of ‘Black Is the Body’ and UVM professor of English and Critical Race and Ethnic Studies and Wanda Heading-Grant, UVM Vice President for Human Resources, Diversity and Multicultural Affairs discussing Bernard’s book with about 30 people at a reading at the Clemmons Family Farm in Charlotte.

Author Emily Bernard, above, said that some of her book ‘Black Is the Body’ was written in the room where the reading took place at the Clemmons Family Farm on Sept. 14.

The setting was perfect for Emily Bernard’s reading from her bestselling book “Black Is the Body: Stories from My Grandmother’s Time, My Mother’s Time and Mine.”

It wasn’t just the beautiful and historic Barn House on the Clemmons Family Farm with the late afternoon light streaming in from the Adirondack Mountains in the distance.

Nor was it the wonderful company that included Lydia and Jackson Clemmons, who cobbled together the charming and inviting home (now a museum and event center) from two barns – when he was in his 70s.

The perfection, served with an extra helping of wow, was due to hearing Bernard read from her moving collection of essays in the Barn House’s great room – where some of the book was written.

It was also perfect because after the Clemmons bought the farm in the 1960s and moved their family to Charlotte from Cleveland, Ohio, they’ve been inviting African American artists and scholars like Bernard to their home. The Clemmons not only wanted to share their heritage with their children, they wanted to share it with their neighbors in the whitest state in the country.

“I really believe that it’s a blessing for all of us to be sitting here,” said Wanda Heading – Grant, UVM Vice President for Human Resources, Diversity and Multicultural Affairs. The reading by Bernard was the third in a series of speakers moderated by Heading-Grant called “To Sing of Common Things: Making a Way Out of No Way,” being presented at the Clemmons Family Farm.

One of the selections Bernard read was from her essay “Going Home,” some of which was written in the great room where the group was gathered.

She said that writing in the Barn House helped “focus the tone of the essay … It felt like the right space to write that piece.”

“It’s about my grandmother and her mother and that space,” said Bernard. “I wanted the reader to sit and listen to the story.” And so we did.

“I come from a family of readers,” Bernard read. She recounts in the essay a story of visiting her aunt’s house in Hazelhurst, Miss. She was browsing her aunt’s bookshelves before a trip to a bookstore. Noting the quantity books, she realized: “There was always more room for books.”

Among the stories that the rapt audience heard were of Bernard’s experiences of motherhood. She is the adoptive mother of twin Ethiopian daughters. One of her daughters is reading “Black Is the Body” for school. Bernard said that, the day before the reading, her daughter told her, “I love your book. I’m loving it and to see you as a person.”

The collective “Awww,” of those gathered in the Clemmons Farm Barn resonated with a harmony rare and precious for anyone who has had or has been a child.

“My brown daughters became black when they were 6 years old,” Bernard wrote in one of the essays she read. “They were watching television one day in February, Black History Month. A commercial came on. It was more like a 30-second history lesson. A commemoration of a pilot, a poet or a politician – a ‘first black’ as a writer I know calls them.”

Her daughters had learned “the absurd and illogical nature of American racial identity,” Bernard wrote. “Blackness, Julia had figured out, had nothing to do with actual skin color. Blackness, she had come to understand, was an external identity; external to her, anyway.”

Hearing this conversation Bernard said that her heart sank because her daughters were learning that blackness is “a social category, not a color but a condition.”

And they were learning that “being black meant that you had to be constantly aware, that you could never really be at ease.”

“The book is a portrait of my soul,” Bernard said. “Every word is true.”

Since the book’s publication, the author said she’s had so many “Forest Gumpian experiences.”

“The book did better than we all thought it would,” Bernard admitted. So well, in fact, that she was surprised when she went back for a reading in her hometown of Nashville to find that half of her high school class was there.

Her classmates, even some who were “good old boys” in high school, were so honest about how they realized that things they’d said and done were wrong and that they “were part of the problem,” Bernard said.

She talked about an essay that appeared in American Scholar called “Fired,” about the breakup of a friendship or “being dumped by a friend.”

“A gentleman wrote me and said, ‘With all due respect, if you had to choose between the essay and the friend, which would you chose?’ And I said, after some thinking, ‘The essay.’”

However, she didn’t include that essay in “Black Is the Body.”

“The book is a different spirit,” she said. “I did write that essay with some malice in my heart.”

Bernard said she “is on the page” as a vulnerable person. “I don’t believe in the hate writing,” but sometimes she has “to go there to know there.”

“This is a book that to me is reckoning with the maternal legacy and my place in that,” said Bernard.

Although she had expected the biggest readership would be women, she said she’s gotten letters from men who said, “Your grandmother is my grandmother.”

Since the publication of her book, making connections that Bernard didn’t anticipate has been an education and she said she’s learned that life is about relationships.

“I’ve met so many people that are beloved by people and that’s been incredible,” Bernard said.

The next speaker in the To Sing of Common Things: Making a Way Out of No Way series is Naima K. Wade reading from her book “Elbow Dreams: A Black Girl Growing Up in Vermont During The 1960’s,” 4-5:30 p.m., Saturday, Oct. 12.