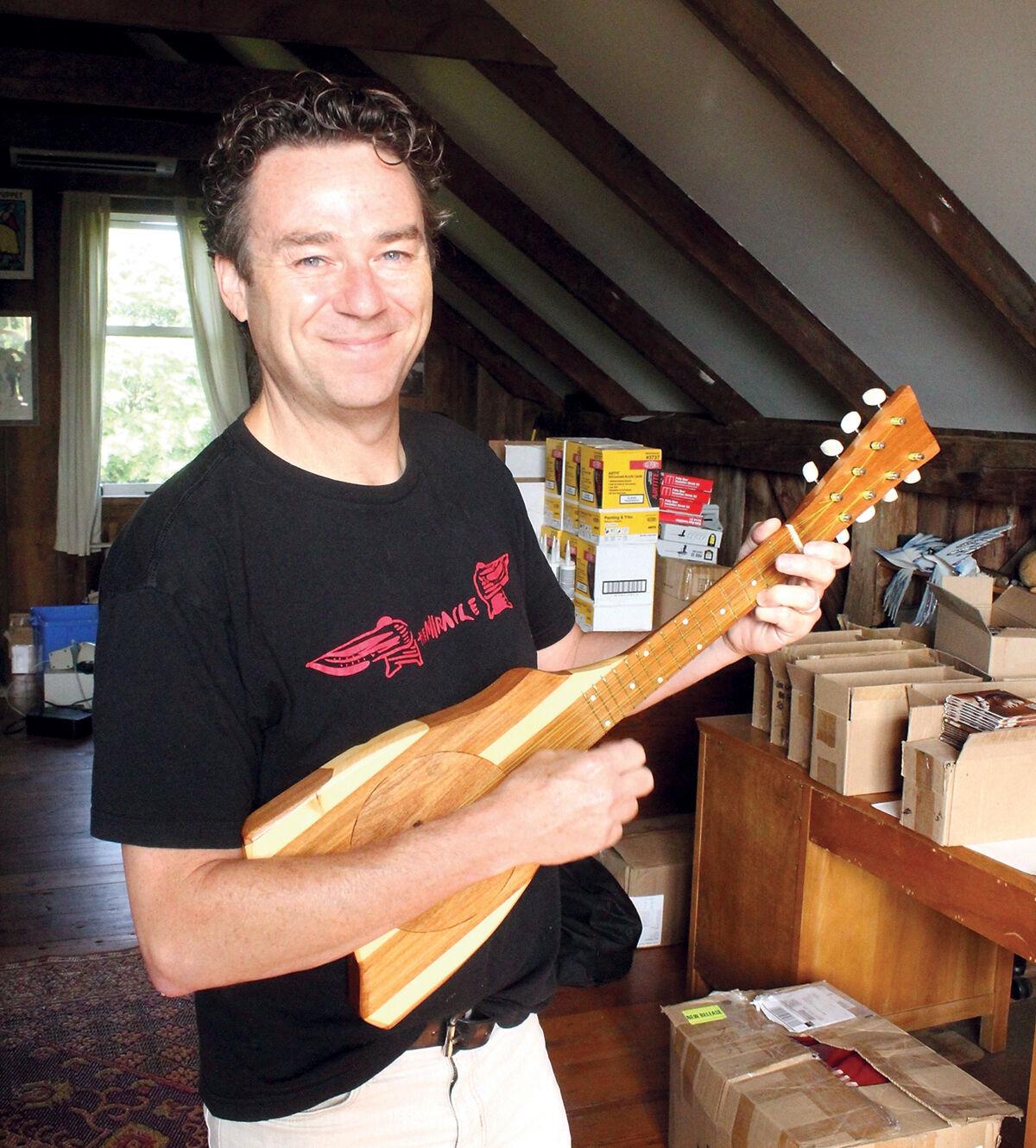 Jacob Edgar strums one of the many musical instruments he’s collected from around the world. 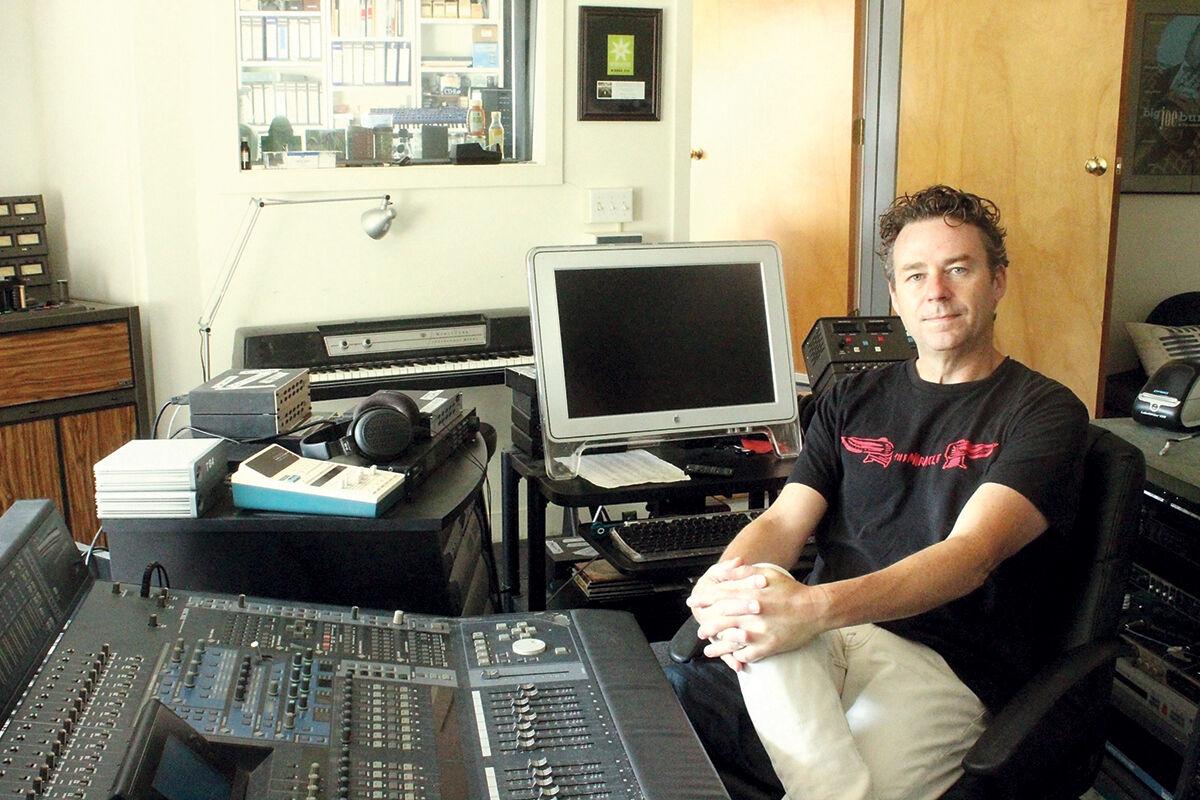 Jacob Edgar sits behind the board in his recording studio on Carpenter Road in Charlotte.

Jacob Edgar strums one of the many musical instruments he’s collected from around the world.

Jacob Edgar sits behind the board in his recording studio on Carpenter Road in Charlotte.

To say that the world is Jacob Edgar’s oyster is truthy ... but not adequately accurate. From his home in Charlotte, the world is more truthfully Edgar’s fisherman’s platter.

Before the pandemic, Edgar spent half the year traveling the globe, looking for music and immersing himself in the cultures of the far-flung places he travels to as an ethnomusicologist.

As great as it’s been to get a bit grounded and spend time at home with wife Deirdre Holmes and their two daughters, he’s got a touch of cabin fever and the itch to resume global gallivanting, exploring the world for hidden musical treasures.

He’s looking forward to a trip to Porto, Portugal, at the end of October.

Edgar works for the label Putumayo World Music, which has been around since 1993 releasing compilations from around the world. He also hunts for unknown — at least in the United States — musicians for his own label, Cumbancha.

Cumbancha is an Afro-Cuban word which Edgar defined: “Basically, if you get together with a bunch of friends, a bottle of rum and a guitar, and the next thing you know it’s 5 in the morning, that’s a cumbancha.”

For nine years he also hosted a TV series called “Music Voyager,” which featured Edgar soaking up the culture, eating the food and listening to the music of all sorts of global destinations.

Besides his love of music, Edgar is aided in his endeavors by his knowledge of Spanish, French, Portuguese and a little bit of Dutch and Icelandic.

For nearly 10 years, except for the last year and half, he’s worked with National Geographic Expeditions as a guest lecturer on high-end expedition cruises. He curates musical experiences for trips that have taken him from Tahiti to Togo, Europe to South America, “to just all over the globe.”

National Geographic invites specialists in different fields to lecture on its cruises.

“In my case, I talk about the music of the countries that we’re visiting, but I also invite musicians to perform, so I curate kind of a concert series,” Edgar said. “I try to use music, not just for entertainment, but to help people understand more about the places we’re visiting.”

Edgar and Holmes moved to Charlotte from Manhattan in 2005 because they wanted to raise their daughters in Vermont and there was a home with a recording studio for sale on Carpenter Road.

“We sold the house to Jacob, and then it became kind of the unofficial capital of world music,” said Chuck Eller, who built the studio in the garage.

Appropriately, Edgar and Holmes met in Costa Rica, both studying at a college there in 1990.

Edgar built a barn that became offices for Cumbancha and for his work as the main music researcher for Putumayo.

“I’ve been the person responsible for finding Putumayo’s music, writing the liner notes and supervising product development,” Edgar said from the barn he suspects houses the world’s largest collection of world music CDs.

“The most interesting projects for Putumayo in particular have always been ones where we’re really the first to uncover and expose people to music from a certain part of the world,” he said.

An example of such a discovery is Putumayo’s “Republica Dominicana,” a compilation of music from the bachata music and dance scene of the Dominican Republic. Edgars said this is one of the first recordings of this musical genre.

When “Republica Dominicana” was released very few people in the U.S. knew what bachata was. It’s grown in popularity so much that Edgar heard bachata music playing in a Mexican restaurant in Richmond a couple of weeks ago.

“We were one of the first and only to do a compilation of music from the South Pacific, so from Tahiti, French Polynesia, New Caledonia — some of these beautiful islands that have incredible music that really never gets much exposure,” Edgar said.

The label has done collections of music from Turkish pop music to French café music.

Generally, the Cumbancha records are not compilations but music by one musician or band. Sometimes the artists travel from far-flung corners of the globe to record at the studio on Carpenter Road in Charlotte. Sometimes Edgar does the traveling to make recordings.

Some of the artists, largely unknown in the U.S., are major artists elsewhere.

Once in Medellin, Columbia, he made a recording on the balcony of a musician’s apartment. After hanging out him, Edgar joked, “It’s been great to meet you. Who knows? Maybe someday I’ll look back on this and say, ‘Hey, I met him back before he was big.’”

That musician is J Balvin. Now, he’s one of the best-selling Latin music artists in the world, having sold more than 35 million records.

The studio on Carpenter Road that was built by Eller is the continuation of a historic tradition of recording in Charlotte. Eller learned sound engineering from Michael Couture, who, with his half-brother Bill Schubart, started Philo Records — the first recording studio in Vermont.

Philo Records was just off Spear Street Extension, on the other side and up the hill from the Quinlan Covered Bridge, not far from where Eller would eventually found Charles Eller Studios.

Eller was originally a musician, a member of Kilimanjaro, a Burlington jazz band of the 1980s and 1990s that sometimes still reunites to perform. Kilimanjaro was very successful in Europe, but also had two records that made it into the top five on the U.S. jazz charts.

Eller had concluded that in big concert settings and festivals, the sound engineering was so bad that it ruined the experience for him and his fellow musicians.

“There was a disconnect between musicians and technicians,” Eller said. “I thought, ‘I need to learn how to do this.’”

So, Eller apprenticed with Philo Records to learn sound engineering.

Schubart, of Hinesburg, said, after a few beers in 1969, he decided to buy a pig barn near Lewis Creek in Charlotte. He cleaned it up and began to replace the pork with recording equipment.

In 1972, Philo Records was formed, starting as a four-track studio, gradually becoming more sophisticated and complicated with a console handling 24 tracks.

“Philo Records was the first multi-track recording studio in Vermont,” said Michael Couture, a singer who founded the studio with Schubart, his half-brother. Couture served as the primary recording engineer and Schubart handled the business side.

Schubart thinks Philo Records became popular with artists because it offered a freedom that traditional studios did not. He and Couture didn’t try to dictate to musicians what songs or arrangements they should record.

Philo Records’ philosophy was that if a musician was good enough to be on their label, they were good enough to choose their music. They gave artists complete creative control over their albums.

Things continued going well for most of the 1970s with records getting good reviews, good sales and recording sessions that often lasted long into the night. And, sometimes, beyond.

“Sometimes recording sessions would go for a day or two nonstop, because people would get into a groove and no matter how tired they were, they would just keep going,” Schubart said.

Despite their success, the music industry imploded in 1979. Three of Philo Records distributors went bankrupt, which meant they didn’t get paid for the records they had already paid to have pressed.

“All the money that was owed to us just disappeared, and we ended up having to declare bankruptcy,” Schubart said.

In 1981, they sold Philo Records to Rounder Records, a big folk music label.

“When I opened the studio in Charlotte we were just slammed. We didn’t have an unbooked day for a number of years. It really, really took off,” Eller said.

Among the many noteworthy musicians who have recorded at the studio are members of Phish, working on others’ projects. Eller said he “stumbled” onto Grace Potter at least 10 years ago and immediately was taken with her sound.

Shortly after beginning to work with Potter, Eller got a call from her parents. Although they thought their daughter was very talented, they were worried about her dropping out of college.

Over dinner at his home on Carpenter Road, Eller told them he thought Potter had a good chance of making it as a musician.

“It was one of those moments that I thought, ‘I’m either going to really regret this or this is going to be really cool,’” Eller said.

After Edgar bought the farm from Eller, he rented the studio as Charles Eller Studios until 2009 when he turned over recording and engineering to a musician and engineer who had worked with him and it became Lane Gibson Recording and Mastering.

Gibson played for several years in the Davis Brothers Garage Band, formed with his cousins in Colorado, and in Downpour, a Burlington area band.

Eller thinks the early success of Philo Records, the success of Charles Eller Studios and the continuing success of Cumbancha and Lane Gibson Recording and Mastering is in large part due to the fact that the sound engineers are also musicians.

“Having a musician behind the mixing console was sort of a novelty back when I started in 1977 at Philo,” Eller said.

So, after Portugal what’s next for Edgar?

“The Southeast Asian peninsula to Vietnam and Laos and Cambodia, Indonesia, those parts of the world have incredible music but nobody knows anything about it,” he said. “I have not spent nearly as much time as I’d like to in the Middle East, so places like Egypt and North Africa, Tunisia.