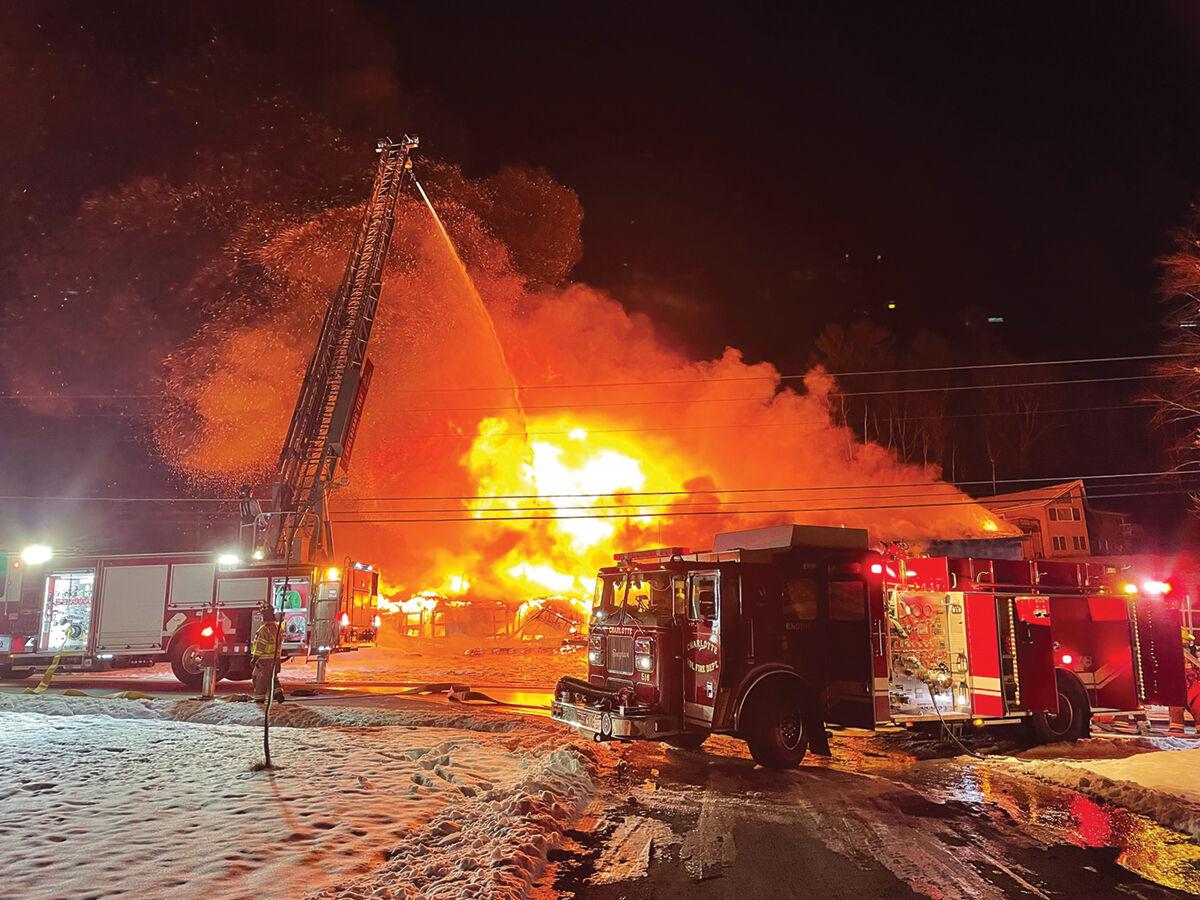 A fire burns on Church Hill Road in Charlotte on Wednesday night, Dec. 22, at the garage housing the snowplows that clear the town’s roads. 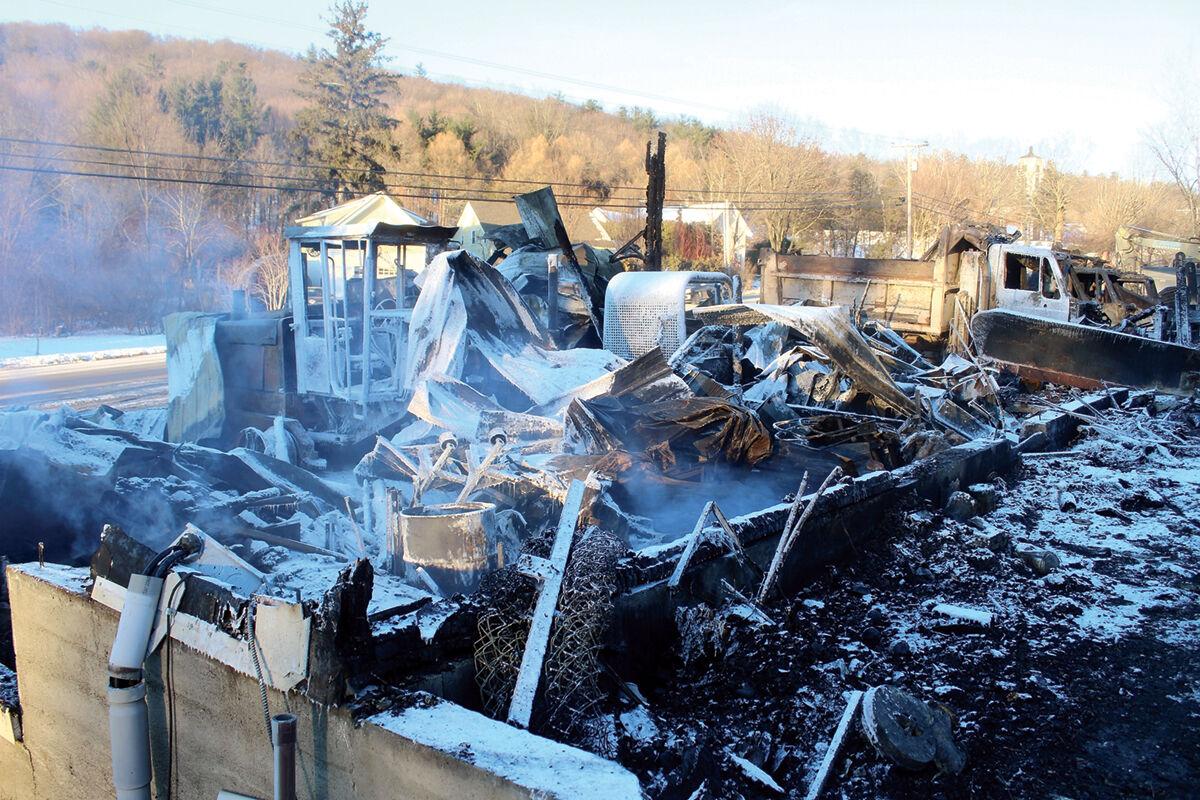 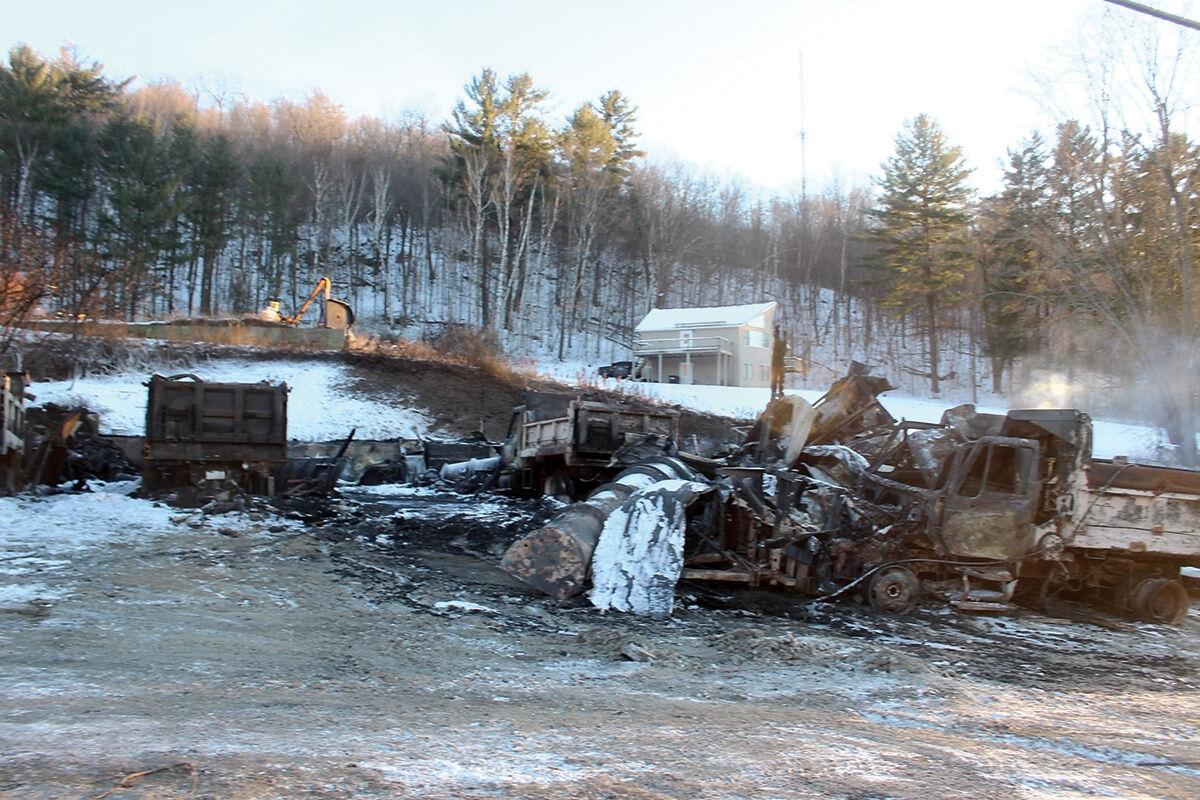 A fire burns on Church Hill Road in Charlotte on Wednesday night, Dec. 22, at the garage housing the snowplows that clear the town’s roads.

At 5:09 a.m. on Wednesday, Dec. 22, Joe Flynn, Vermont secretary of transportation, got an email from the governor.

“See what you can do to help Charlotte,” Gov. Phil Scott said.

Scott wanted to see how the state could help after a fire last Wednesday night destroyed the garage housing Lewis Excavating’s equipment, most notably the snowplows that clear 80 miles of Charlotte roads in snowy and icy weather.

Flynn related the story of the governor’s early morning message, standing in the Charlotte salt shed on Route 7 less than half a mile down from the Church Hill Road site of the still smoldering remnants of the garage, as he was overseeing the delivery of three state plow trucks.

Besides four snowplows, other equipment road commissioner Junior Lewis lost in the fire included a grader, a bulldozer and some farm tractors.

A fifth older plow truck, which had been retired but is now being pressed back into service, was parked outside, next to the garage. It was saved when Charlotte fire fighters hustled it across the road before it was destroyed.

The state’s response came none too soon when a couple of inches of snow and freezing rain fell two days later on Dec. 25, a meteorological Christmas present Lewis and his crew were prepared for — with the help of the state’s trucks.

Lewis said his son got a text from a Charlotte firefighter around 6:55 p.m. that Wednesday night asking if their shop was on fire. The Lewises hurried to the scene and found the building already “fully involved.” It is a total loss.

Chief Dick St. George said the fire department was at the fire four minutes after the call came in, but the fire was already out of control before the 911 call.

The fire department used over 100,000 gallons of water and a year’s supply of foam to fight the fire, he said.

There were firefighters at the scene on Thursday morning, St. George said.

Charlotte Fire & Rescue was joined in the effort by fire and rescue departments from surrounding areas including Shelburne, Hinesburg, Vergennes and the Vermont National Guard.

The amount of the loss is undetermined, and the source of the fire is still unknown.

“It could be anything,” Lewis said. “A mouse could have chewed on a wire.”

The next night the Charlotte Selectboard held an emergency meeting to deal with the loss of the garage.

At meetings during recent months the subject of the town building a town garage has been discussed, but the fire meant this conversation became urgent and specific, chair Jim Faulkner said.

Charlotte is different from most Vermont towns as its road commissioner is an elected position who also supplies and houses all the road maintenance equipment. There is no town garage.

Lewis’ crew of three are not town employees. As a private contractor he pays for their insurance and benefits, not Charlotte.

“I want to commend Junior and the work he’s done for public safety in the town. He’s the one person I could call if we had to sand a driveway to get into a fire, a cardiac arrest, whatever,” St. George said. “There’s no good place for him to keep equipment right now.”

St. George said the town had gotten a good bit of money from the federal government from the American Recovery Plan Act and building a town garage might be a good way to use it.

“A town garage would benefit every person in the town,” he said.

Board member Matt Krasnow said the site of the former flea market on Route 7 just south of Charlotte Crossing might be a good place for a town garage, but local officials need get feedback from town residents.

“The town still needs to go through the same planning process as anyone else. We’ll need to get engineering done, a sketch plan before the development review board and start that process this winter so we could be shovel ready,” he said.

St. George agreed the site on Route 7 is probably the best property the town owns for building a town garage because it’s big enough and not hampered by wetlands. However, he predicted that even if the process for designing, permitting and getting resident input proceeds quickly it would be lucky for the town to have a contractor by August or even September.

Faulkner said because it does take a long time to get a project like this done it is important for the town to get started: “We can fast forward some of this stuff.”

Krasnow said he had gotten calls and emails all day from people asking how they can help and many with expertise needed for getting a building engineered and designed.

“It would be a good idea to reach out sometime soon and ask people who are willing and capable of offering pro bono services,” he said.

Lewis had worked out of the garage since 1976 when he was a junior in high school, working on Charlotte’s roads in high school for Henry Lane, who was road commissioner for over 45 years.

Lewis has been road commissioner for 23 years and rented Lane’s old garage.

Lewis believes the destroyed garage is at least 100 years old and hopes the fire investigator will find the source of the blaze.

On Thursday he didn’t know if insurance would pay for all his loss. “I’m hoping they’re going to,” he said.

With four trucks and drivers, it takes Lewis and his crew of three about three hours to scrape all the town’s roads, which are split about 50-50 between dirt and blacktop, so there’s about 40 miles of each. On days when the weather keeps dumping, Lewis and his crew may repeat the scaping several times.

“If the town decides that they could come up with a building, and they wanted me to stay, I definitely would stay on. I really enjoy the work. I always have,” Lewis said.

But at age 62, he said, he’s too old to build a garage to house road maintenance equipment for the town. If the town decides not to build, he won’t run for re-election on Town Meeting Day this year.

His position as road commissioner is volunteer work, but the town pays his company and about 60 percent of his work is town roads.

“I always tell people up front that ‘Hey, the town is number one. It could be we’re going to your house digging a cellar hole or whatever,” Lewis said. But if a town road problem arises, he hits the road — so to speak.

“I’ve always told my boys, ‘When you get up in the morning and you say what can I use for an excuse, so I don’t have to go to work today?’ Find a different job,” he said. “I’ve never said that. I’ve always enjoyed the work.”

His wife Leslie Lewis takes care of all the paperwork for Lewis Excavating.

“She’s the one doing the work,” Lewis said. “I’m a kid that never grew up, just got bigger toys to play in the sandbox.”