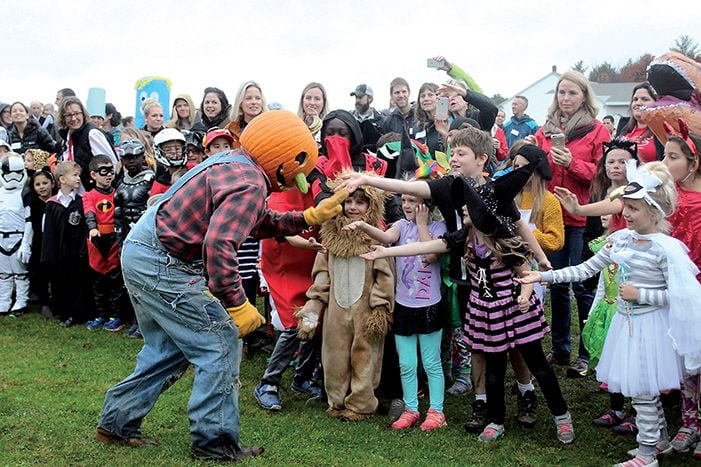 The Pumpkin Man greets students in costume at the Charlotte Community School Halloween parade Oct. 31 for his final appearance. After roughly 30 years of emerging from the nearby woods to highlight the school’s Halloween celebration, the school administration has decided to end the Pumpkin Man tradition in favor of inclusivity and student safety. 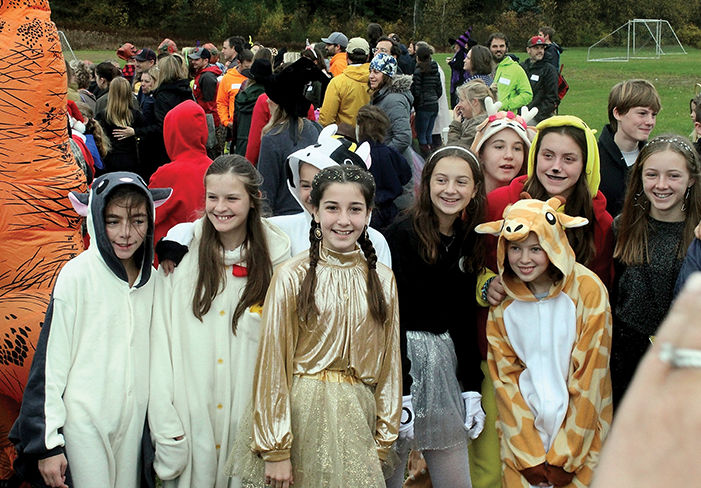 A plethora of creatures and characters showed up to bid the Pumpkin Man farewell at the Charlotte Central School Halloween celebration. 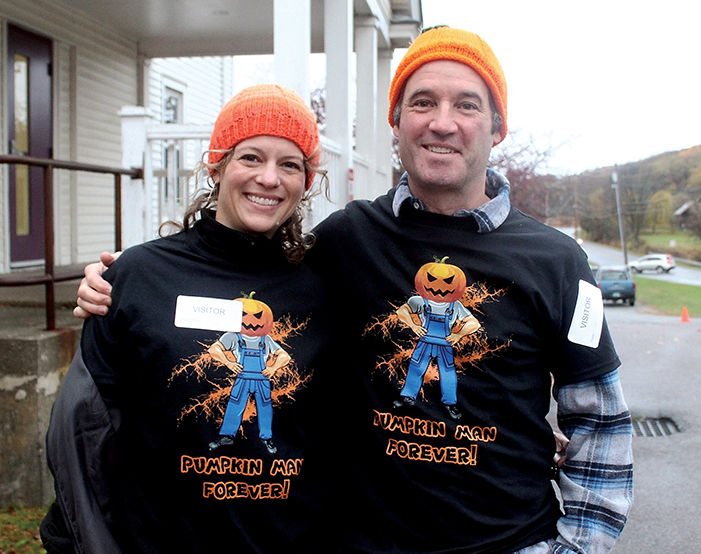 Jenny (left) and Jordan Wilson wore T-shirts representing their support for the Pumpkin Man’s many years of appearances at Charlotte Central School.

The Pumpkin Man greets students in costume at the Charlotte Community School Halloween parade Oct. 31 for his final appearance. After roughly 30 years of emerging from the nearby woods to highlight the school’s Halloween celebration, the school administration has decided to end the Pumpkin Man tradition in favor of inclusivity and student safety.

A plethora of creatures and characters showed up to bid the Pumpkin Man farewell at the Charlotte Central School Halloween celebration.

Jenny (left) and Jordan Wilson wore T-shirts representing their support for the Pumpkin Man’s many years of appearances at Charlotte Central School.

The final appearance of the Pumpkin Man at Charlotte Central School was almost washed out, but the rain held off. The school’s annual Halloween Parade and the gourd-headed ghoul’s final visit came off without a glitch on Oct. 31.

Some of the adults in the crowd wore T-shirts that read, “Pumpkin Man Forever,” a group of students wore costume pumpkin heads, and three women and a Labrador retriever held up a banner saying “Thank you! Pumpkin Man.”

The school administration has announced plans to recognize the holiday in a more tied to the season, more inclusive and that won’t include the 30-plus years of the Pumpkin Man tradition.

Requests by The Citizen to talk or communicate via anonymous email with the Pumpkin Man (or the person portraying the Pumpkin Man) have been refused.

A person who asked not to be identified but who said they were the Pumpkin Man’s “agent” said that the Pumpkin Man wouldn’t respond to the questions or interview requests because they didn’t want to destroy “the magic.”

This year members of the public who attended the school’s celebration were required to sign in at the front entrance and given a sticker to wear. Charlotte Central School Co-Principal Jennifer Roth said that more than 200 community members signed up and participated in the Halloween celebration on the school’s athletic fields.

Regarding the Pumpkin Man’s legacy, she said, “There’s a lot of speculation about where his magic will appear in the future. We are grateful for the time he dedicated to our children at CCS and look forward to seeing his magic spread to other arenas in the future.”

She said that following the celebration, the “feedback from students, staff and family members was that this was the smoothest year in memory. There was definitely a lot of positive energy and our hope is to take that excitement and positive energy into an event for next year.”

The school has been getting a lot of ideas from students, staff and the community about what the seasonal celebration might evolve into, Roth said. She said it will be something that aligns with the school’s “curriculum and culture.”

The Halloween event has been difficult for staff and teachers to monitor who is at the event, she said.

“This fall on Sept. 12, we had a community-based potluck dinner and we had a tremendous showing of people. There are venues where we can be open to people, we want to showcase the school, and where we have each child with their parents so there’s more accountability,” said Roth.

She said that decisions about school safety are made working closely with a school safety team involving a consultant who works with the school district and the state on safety, first responders from Charlotte Fire and Rescue and Shelburne Rescue, the Shelburne Police Department and the School Resource Officer Matt Collins.

“We try to keep the school emotionally and physically safe,” Roth said.

The Pumpkin Man appeared as usual, making his entrance for the woods behind the athletic fields. This year, as has sometimes happened in the past, he was accompanied by another similarly coiffed but female individual of the pumpkin persuasion dressed in a denim dress.

They carried poles hung with two banners which they unfurled and stuck into the ground. One of the banners read, “Take care of the earth.” The other read, “Be kind.”

One attendee wearing a “Pumpkin Man Forever” T-shirt was Jenny Wilson, who said, “We just don’t want the Pumpkin Man to go away.”

Wilson said that she loved what he did at the celebration on Thursday and that he ended with “two positive messages.”

“I see the world has changed. I see the concern from an administrative function,” said Wilson. “It’s a sweet tradition and a unique tradition, and the fun and mystery of it makes it really special. It’s unfortunate that it has to go away.”

The community turned out and spoke up at the Feb. 10 Charlotte selectboard meeting, spurring a debate on the future of net metering and solar investment in the community.

Many irons in the fire of creativity

Jeff Beerworth of Charlotte is a Renaissance man’s Renaissance man. An artist, a police officer, a detective, an author, a singer-songwriter, a maker of bamboo fly rods, now he is the program director of the Shelburne Craft School. Creativity is his oxygen.

The hills may be alive with the sound of music, but in Charlotte, they are also alive with art. One person who has been mining the artistic riches of the town for decades is Judy Tuttle. She curates the art exhibited at the Charlotte Library and the Senior Center. Exhibits that change every other month at the library and every month at the Senior Center. Tuttle knows; there’s never a short…