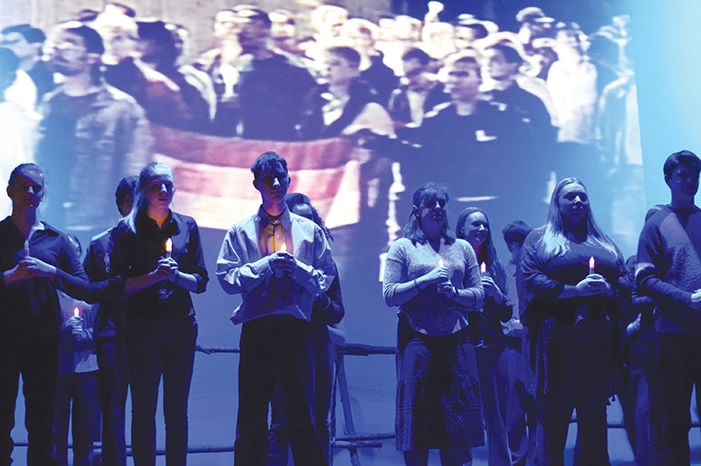 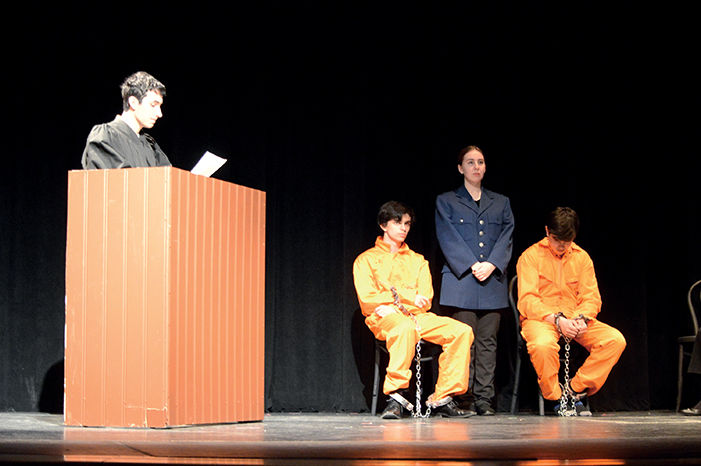 Engrossed in the fall musical last October, director Candy Padula wasn’t paying much attention to the news. She often listened to the “Legally Blonde” soundtrack on repeat as she commuted to Champlain Valley Union High School. However, one day she listened to the news, right around the 20th anniversary of Matthew Shepard’s death.

Padula had always wanted to direct “The Laramie Project,” and this year, all signs pointed to doing the show.

Her first step was getting the high school’s leadership team on board. Oftentimes Padula has to make changes to a play to accommodate a family-friendly atmosphere. She decided not to make such concessions for “The Laramie Project.”

“I said I did not want to change stuff, that it was too important,” Padula said. “The administration gave it thoughtful consideration and let us do the show.”

Principal Adam Bunting agreed that the play was appropriate for students to perform.

“”The Laramie Project” gives us the opportunity to engage in important dialogue as a community. Our students have exhibited the willingness – and leadership – to have mature conversations with civility,” Bunting said. “In addition, The Matthew Shepard Foundation urges us to Erase Hate of all kinds – a message any school should support!”

Padula then asked the students she was working with on “Legally Blonde” if they would prefer a comedy or a heavy drama. The overwhelming response Padula got – the heavy drama.

“I was really quite surprised they shouted out a drama,” she said.

The play takes place after Shepard was beaten and left for dead because he was openly gay in his small town of Laramie, Wyo. CVU’s set design brings you to small-town Wyoming. Projections cast photos of Wyoming onto the screens. News clips and photos of Matthew Shepard also appear.

“I feel bad for you guys (on stage) who can’t see it from here,” Padula told the cast after Monday’s rehearsal.

The show takes place after Matthew Shepard’s death. The dialogue was written by members of the Tectonic Theater Project’s interviews and memories interviewing Laramie residents. The play is presented as a series of interviews intertwined with the news coverage of the crime’s aftermath.

“It really presents a unique perspective on the whole situation,” said cast member Ambu Dulleb. “It’s not just the protagonists and the antagonists showing two sides of the story. It’s the community members talking about it from a variety of perspectives. There’s a lot of middle ground in this.”

Dulleba plays Shepherd’s friend Romine in the show who was the leader of the angels who surrounded protestors at Shepard’s funeral.

“I don’t play a character with different views from myself, but those who do get to test that out,” she said.

Oscar Williams, who plays one of the murders and a variety of ensemble characters, said that he felt personal growth as an actor by playing a character he doesn’t agree with.

“It’s interesting to see from his unique perspective and break down that barrier,” Williams said.

To prepare for the production, students watched videos and learned about Shepard.

“Every time I see his face, it’s powerful,” Dulleba said.

Because the play is based on a true story, there were supplemental materials for the students to use for research. After his death, Shepard’s parents, Judy and Dennis Shepard, started the Matthew Shepard Foundation to “to erase hate by replacing it with understanding, compassion and acceptance,” according to the foundation’s website.

Padula scheduled an hour for the 30-member cast to talk with Jason Marsden, executive director of the Matthew Shepard Foundation and friend to Shepard, for an hour about the play.

“It was very moving to talk to Jason Marsden, we were really getting to know these people in the play – it’s a very intimate show,” Padula said.

Marsden, who came out as gay after Shepard was killed, provided a unique perspective to students and Padula.

Padula recalled a student asking Marsden, “If this had not happened to Matthew Shepard, what would have come about in the LGBT community?,” she said. “He replied, ‘The community seemed to be ready for a change that would be the inspiration for a movement of change. If it hadn’t been Matthew it would have been the next gay beating or murder that would bring about that anger to make change.”

That and other pieces of the conversation were included in Padula’s direction of the project.

The group’s focus of the show is to help spread The Matthew Shepard Foundation’s message of erasing hate. The cast has a special interactive opportunity for audience members to participate in spreading that message.

“We are not going to erase hate by putting on our show, it’s a small step,” Padula said. “We are taking our step.”

Directing and participating in the show have taken bravery, Padula said, and she hopes audiences are brave enough to come see it.

“It’s been brave on all of our parts – the students are extremely brave, the school is brave for allowing us to do this,” she said. “We are all putting ourselves out there.”

Jane Lindsey, who is cast as one of the protestors in the funeral scene, agreed.

“It’s difficult to stand up on stage to do the opposite of what you believe in,” she said. However, the show serves a piece of theater that she, and the cast, hope people think about.

CVU is recommending a PG-13 rating for the show. However, Padula said that if parents feel their slightly younger kids are mature enough to digest the play then families “should be brave too.”

“Laramie is a small town and we are a small town,” Padula said. “Those ideas persist. It could be us.”

“The Laramie Project’ sends a very powerful message that we need in this stage of American history,” he said.