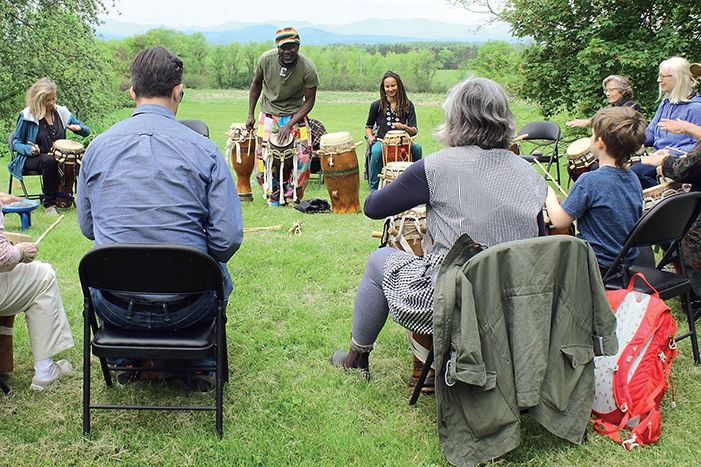 From left, Assane Coly, of Winooski, and Krista Speroni, of Bennington, teach Sabar drumming, which is from the west African country of Senegal. 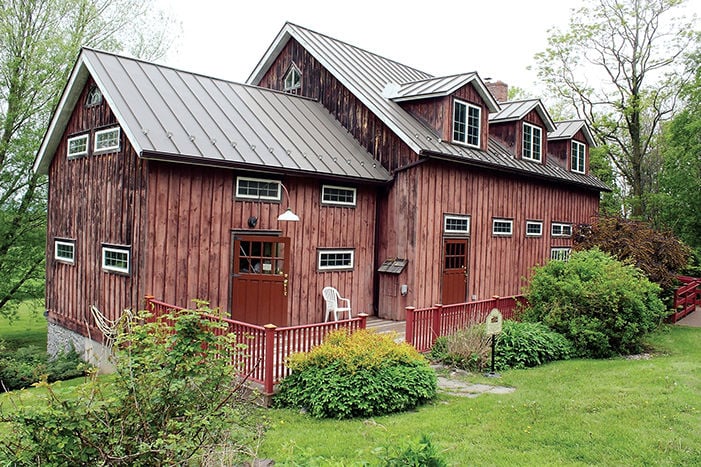 The Clemmons Family Farm Home Barn was constructed from two barns from the late 1700s or early 1800s – a dairy barn and a granary – that Jackson Clemmon combined in the 1990s to form a home that later became a museum, an event venue and an Airbnb.

From left, Assane Coly, of Winooski, and Krista Speroni, of Bennington, teach Sabar drumming, which is from the west African country of Senegal.

The Clemmons Family Farm Home Barn was constructed from two barns from the late 1700s or early 1800s – a dairy barn and a granary – that Jackson Clemmon combined in the 1990s to form a home that later became a museum, an event venue and an Airbnb.

This past Saturday, June 1, was a typically atypical day at the Clemmons Family Farm.

Which is the way it’s been most days since Jackson and Lydia Clemmons bought the 148-acre farm on Greenbush Road in 1962.

Tours of the farm and events for the summer season started Saturday and the day began with a tour of the Barn House. As its name implies, it’s a house made from two barns (a dairy barn and a granary) dating from the late 1700s or early 1800s. In the 1990s, Jackson Clemmons moved the structures and renovated them into a house, said tour guide Susan Hyde.

The outside of the quintessential Vermont farm building gave no hint of the collection of African art it housed. Inside, the exposed, hand-hewn beams typical of older American post and beam architecture contrast with the amazing African art that hangs from its walls.

The exhibits include masks, headdresses, blankets, granary doors, beaded aprons, paintings, collages, textiles, chairs, instruments, statues and more. Much of the art illustrates ways that form can enhance, even elevate, function and that the utilitarian definitely need not be bland.

From Cleveland to Charlotte

Jackson Clemmons was a doctor of pathology and his wife was a nurse in Cleveland, Ohio, when he was offered a position at the University of Vermont Medical Center. He was staying in a Burlington hotel on a visit for an employment interview and a newspaper ad caught his eye. The ad was for a farm in Charlotte that was for sale. He caught a bus to Shelburne and walked for 6 miles of dirt road to an old, rundown farm.

In the early 1960s, many African Americans were still leaving rural areas for cities, but the Clemmons decided to buy the farm and moved their family to Charlotte.

“They defied the expectation that they would live the urban life,” said Hyde.

As the tour was ending, up the hill from the Barn House an African drumming workshop was starting.

On a lawn between an old white house that the Clemmons’ renovated into their home and an old blacksmith shop that Lydia Clemmons transformed into the first African art import order business in the United States, a class was being held. Assane Coly of Winooski, and Krista Speroni of Bennington, were teaching 12 students Sabar drumming, which originated in the west African country of Senegal.

The Clemmons Family Farm has launched a program called A Sense of Place that was awarded a $350,000 grant for 2 ½ years from ArtPlace America to build community through local multi-cultural arts projects, said Roz Whitaker-Heck, Clemmons Family Farm director of communications. The drumming workshop is one of the projects funded by that grant.

Childhood on the Clemmons farm

Lydia Clemmons, one of the five children of Jackson and Lydia Clemmons, was participating in the workshop and experiencing the multi-culturalism of Africa in a classic Green Mountain State setting was nothing new for her. She was 2-years-old when her parents moved here. Some of her earliest memories are experiences of African culture her parents shared with their children.

“My parents were making sure that our cultural community was part of the community of Charlotte,” she said.

Lydia Clemmons said her parents often invited people to their farm to share African culture with their children and their neighbors. And the guests were people from all over the United States and the world.

She is happy “to see how much one peoples’ family has influenced other people in the neighborhood.”

For example, one of their neighbors was Ted Braun, who’s grown up to be a filmmaker and whose first film was “Darfur Now” about the genocide in Darfur, Sudan. The film won the NAACP’s Image Award.

Because of getting to know the Clemmons, she said, they understood that this black family was connected to other black families from all over the continent and the world.

But even with her cultural experiences, Lydia’s childhood was like the childhood of other farm children in Charlotte. Their father may have been a doctor and her mother a nurse, but the Clemmons family ran a subsistence farm.

They had chores to do before and after school and on weekends. There were cows to milk. They raised hay for their livestock and for sale. When it was harvested, Lydia said she would drive the tractor while her father and older brother would throw the bales on the trailer.

Her mother and her three younger sisters were in charge of the vegetable garden.

Growing up on the farm was “fantastic,” she said. “We were over every blade of grass. We knew every inch of this land and every space has its own memory.”

As an African American farm, the Clemmons Family Farm was unique. Unfortunately, it has become even more unique.

“There has been a 93 percent decrease in African American owned farms from 44 million acres to 4 million, which is less that one-half of one percent of farm land in the United States,” Hyde said.

In Vermont, she said, out of 7,000 farms in the state, there are now 19 African American-owned farms with a total of 740 acres.

This means that the Clemmons’ farm has unfortunately become more unique than it was in 1962. Its 148 acres is now 20 percent of the total of black-owned farm land in the Green Mountain State, still the whitest state in the U.S.

The Clemmons Family Farm in Vermont is the one of the 22 official landmark sites of museums, cultural venues and historic markers on Vermont African-American Heritage Trail. You can find out more about the trail at https://vermontvacation.com/africanamericanheritagetrail.

More information about the Clemmons Family Farm’s history, tours and events is available at www.clemmonsfamilyfarm.org/about-us.html.