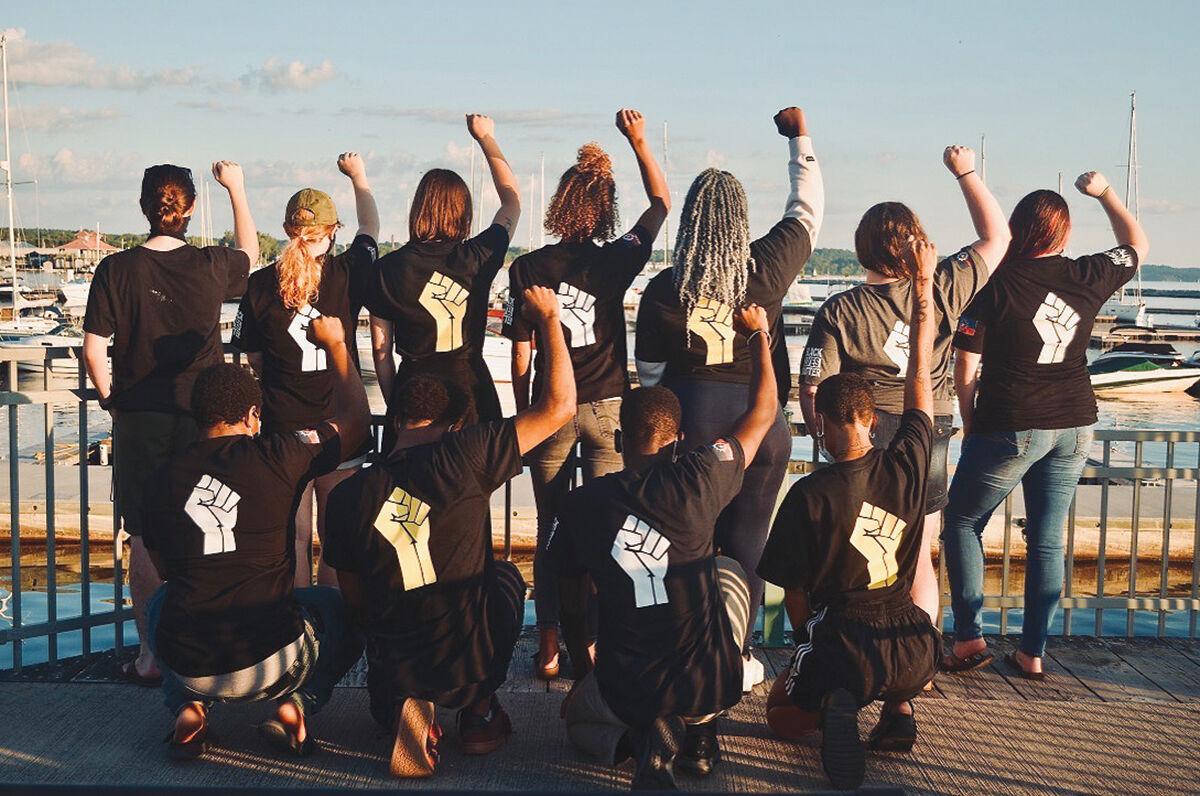 Zanevia Wilcox and members of The Black Perspective, a social justice group, pose by the Burlington Waterfront. 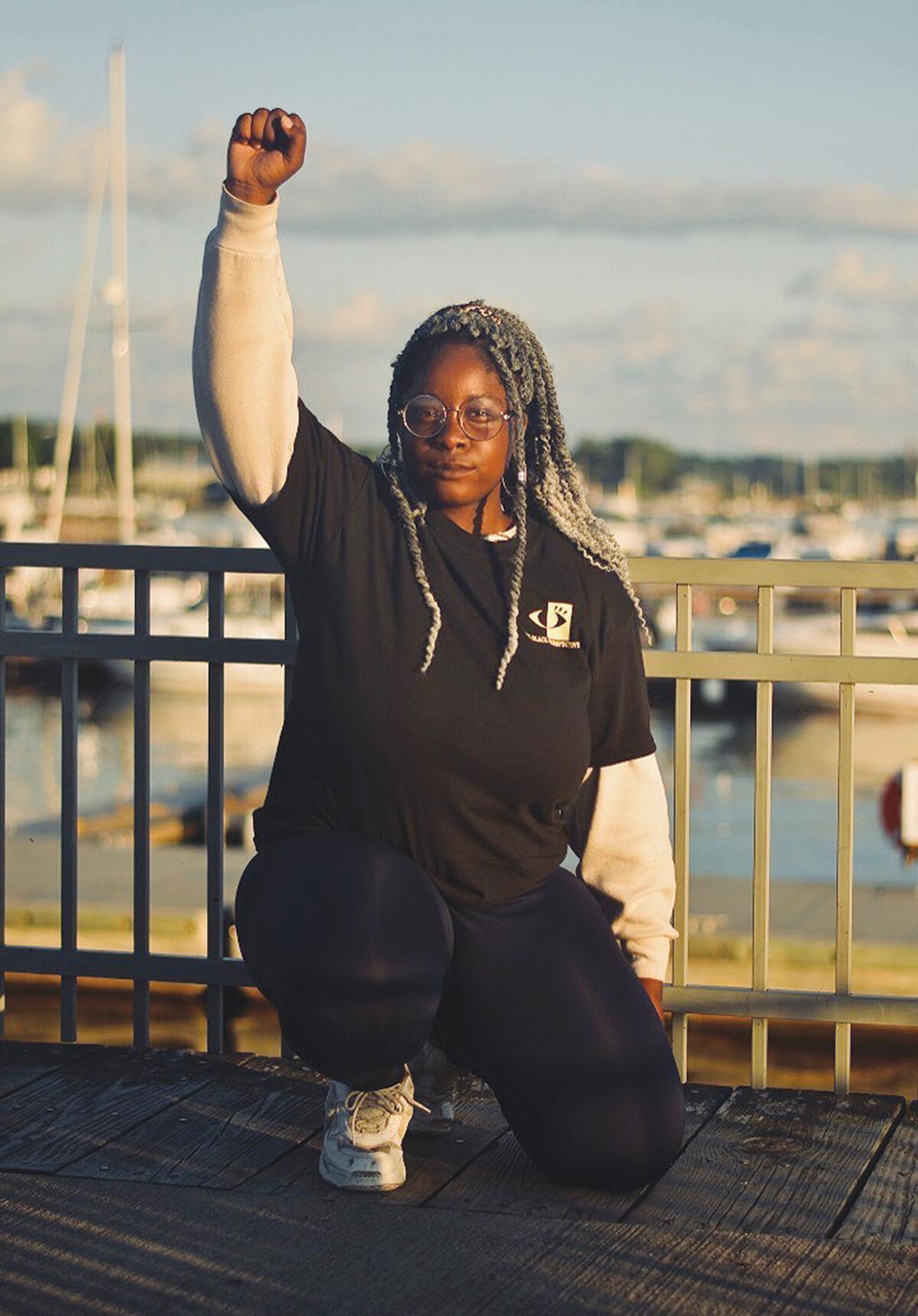 Zanevia Wilcox raises a fist in front of the Burlington Waterfront. Wilcox, 18, is an advocate for social justice.

Zanevia Wilcox and members of The Black Perspective, a social justice group, pose by the Burlington Waterfront.

Zanevia Wilcox raises a fist in front of the Burlington Waterfront. Wilcox, 18, is an advocate for social justice.

Zanevia Wilcox arrived late to the Statehouse lawn on July 25. When she stepped onto the scene two rallies were already in full swing: one in support of law enforcement, the other a counter protest in support of Black lives.

The first thing she heard as she joined the Black Lives Matter contingent, was a person telling her to, “Go home you f---ing b---h.”

Zanevia Wilcox: I, too, am America

Zanevia Wilcox reads her poem “Letter to Denise,” inspired by a racist interaction that was captured on video at a July 25 protest.

“That’s when I said, ‘Oh, okay. This is the kind of rally this is,” she recalled.

Wilcox, an 18-year-old African American woman from Burlington, felt strongly about showing up to the counter protest to support Black Vermonters.

The richest words of your ancestors past

I wish you knew me.

So you could see just how empty those words felt

But my experience don’t come for free

See, despite your best efforts

Your words don’t hurt me

It was knowing my white peers

Were so comfortable at home

Patiently waiting to see yet another Black tragedy

Played out through their phones

Because of you I can write this

Yet refuse to bite my tongue

People have held on to your words

As tightly as the rope which my ancestors hung

But I’ll let it go

Because YOU Denise, are not

The only difference is you said it without a smile

Without the camera shoved in my face

Stand your ground and put

I say it with no melody

But the words are just as harsh

Knowing that you’d sing along

Denise you are Vermont

Vermont you are Denise

I would love to introduce you both

But it seems you know each other all too well

You’re both right, being Black in

Vermont will never be enough

Unless you belong to a cell

So they have no story to tell

Eyes up, snap your fingers as I yell

I hope I wasn’t too aggressive

Take it, it's yours

Hence why it sounds so oppressive

I swear, I swear my voice is my only weapon

Hands up, for who?

I bare my palms as deception

I ain’t afraid of you

You Denise are the result of a country that remains silent

Sit back and hike the trails

Until these green hills become violent

I know I’ll see you again

Maybe not you but someone similar

Because you and Vermont are just all too familiar

“The real, main goal was to drown out the hatred,” Wilcox said. “Which, from an event that was supposed to go from 11 until 2, that was cut short from 11 to 12, I guess as protestors and activists that was my victory.”

But victory did not come without challenge or strife. As members of the counter protest, including The Black Perspective – an activist group Wilcox helped found to support and elevate minority Vermonters, and of BTV Cop Watch – a Burlington-based advocacy group that “films the cops for community self-defense,” played music and chanted messages of equality, to “drown out the hatred,” members of the pro-cop rally moved in.

About 20 minutes into the pro-law enforcement rally, counterdemonstrators began calling out the names of Black people who had been killed by police officers, according to a report in VTDigger. A group of pro-police rally goers waved flags in front of them, one saying, “Fee-fi-fo-fum I smell the blood of liberal scum,” the report says.

Another person spit at a counter protestor, Wilcox said. When they reported the incident to police, the officer said it was “free speech.”

By 11:40 a.m., the pro-cop rally speakers were “nearly inaudible” over the counter protestors’ chants of “Black lives matter,” according to VTDigger.

Amidst the clash, a woman walked up to Wilcox, and told her, “Black Lives don’t matter at all to me.” The woman continued, saying that “Blacks have been coddled for years,” and concluding “Black lives don’t f---ing matter to me,” before walking away.

Wilcox said she smiled and nodded back at the woman.

“I smiled and shook my head to show I wasn’t afraid,” Wilcox said.

Wilcox later found a woman on social media, Denise Simonu, whom she said is the person that yelled at her during the rally.

Wilcox shared the video of Simonu yelling racist remarks at her, and a picture of the woman’s profile on her Instagram account. Both have since been shared locally and nationally by activists’ social media accounts.

“When I posted it, the first thing I thought was I want my brothers and sisters and siblings to know that we see it and others should too,” she said.

She added that the importance of sharing the video trounced any fear she had of racist comments on her post. Wilcox has reached out to Simonu on social media but hasn’t received a response.

“I wish her the best and I really hope that she doesn’t leave this earth with that hatred, with that fury, because I wouldn’t wish that on anyone,” Wilcox said.

But before she posted the videos of Simonu, she shared a video of herself and another counter rally goer, Noel, whom she met through activism. The two can be seen dancing and having a good time at the protest, Wilcox said. The video was meant to show that she was “unbothered.”

“This kind of hatred, this kind of level of racism isn’t a new experience. I experienced that before I did activism. I experienced that even greater when I was doing activism in high school,” Wilcox said. “I’m doing this for my brothers and sisters and siblings. I have had the trauma that has given me that ability to ignore it, to kind of avoid and find those comments not as hurtful.”

One of Wilcox’s earliest memories of race and racism comes from her childhood.

When she was born, doctors struggled to pronounce her name, so her mother said, “just call her Naynay.” It was assimilation at a young age, Wilcox said.

But there’s no real first memory of becoming aware of racism, just like there wasn’t a single moment that made her want to combat it.

“The moment I stepped into American society with the color of my skin, I knew it was time for social justice,” Wilcox said.

At 18, she’s experienced hate and carries the trauma that goes with it. From being labeled the “bad kid” in middle school, to watching her 16-year-old brother get arrested after another teen called him racial slurs and began to fight him. There are other wounds Wilcox carries with her.

“It’s hard for any person of color to revisit this racial trauma,” she said.

But, she added, the frequency with which she’s experienced these incidents, and seen them in her siblings’ lives, has made her go “numb” to the pain. This is how she can be present for others, to support them like when things became heated at a rally on July 25.

“If I started this work telling myself that I’m doing this to dismantle the system, or I’m doing this to correct whiteness, I would have gray hair at age 18,” Wilcox said. “What’s gotten me where I am is reminding myself that I love my people: trans, LGBTQ, able-bodied, disabled, I’m all for it. I love my people. That’s the only reason why I do what I do. More importantly, I love my ancestors. I am my ancestors.”

Combating racism will take personal efforts, Wilcox said. It’s not by chance that there are people in Vermont who will go to a rally and “be overtly racist,” she said.

“There’s a reason why we’ve created an environment for racists to feel comfortable, and we can’t deny that that is rooted in the whiteness within that environment,” Wilcox said.

It’s every white person’s job to look at white privilege and correct it, she said.

“The biggest solution to this is really, truly the bare minimum, which is to empathize and care about everyone but yourself,” Wilcox said. “It’s a lot harder than it sounds, I think, for some individuals. But that’s what being a Black activist is.”

“When we talk about Black liberation and Black equality and equity, that helps everyone. That uplifts everyone,” she continued.

But, she added, it shouldn’t have to take that much to care for people.

The Citizen reached out to Denise Simonu on social media but did not hear back from her before press deadline.