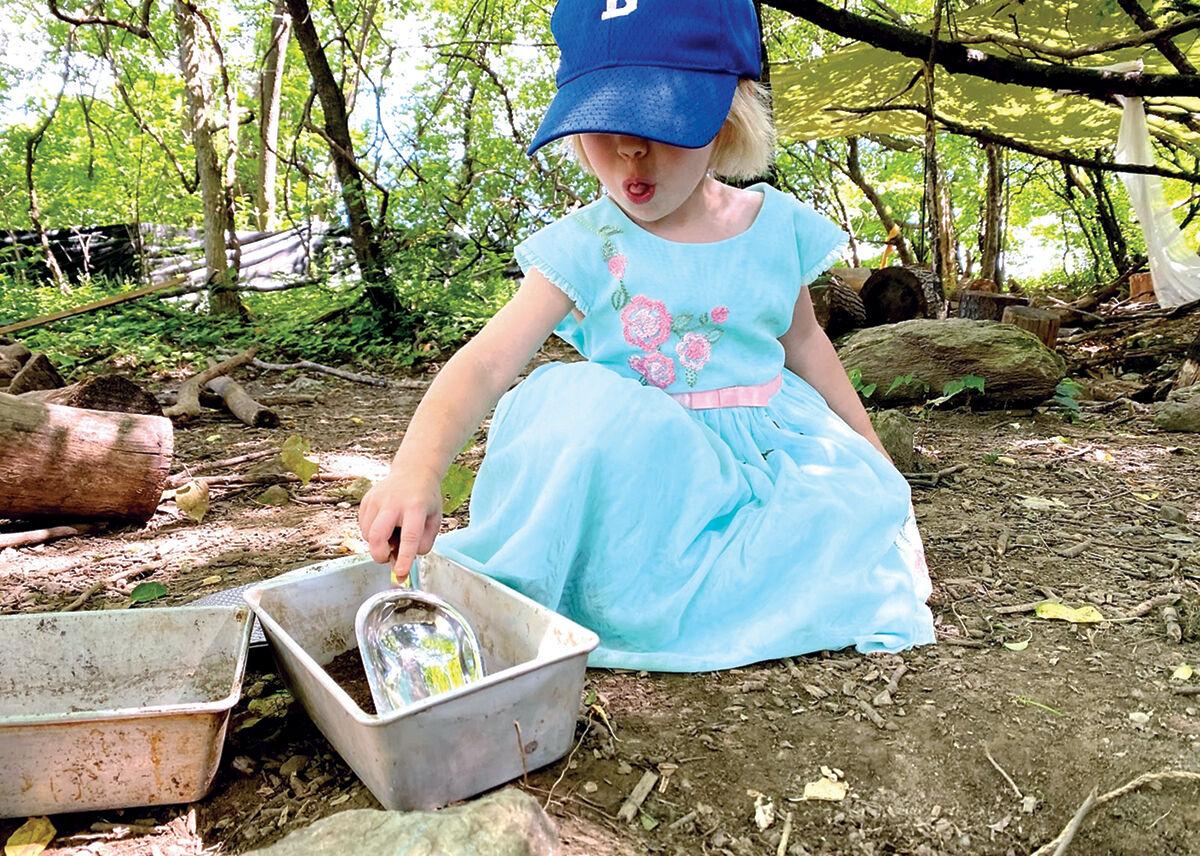 Aisling Booska, of Bristol, creates a mud kitchen in the outdoor classroom in the Little Woods at Annette’s Preschool in Hinesburg. 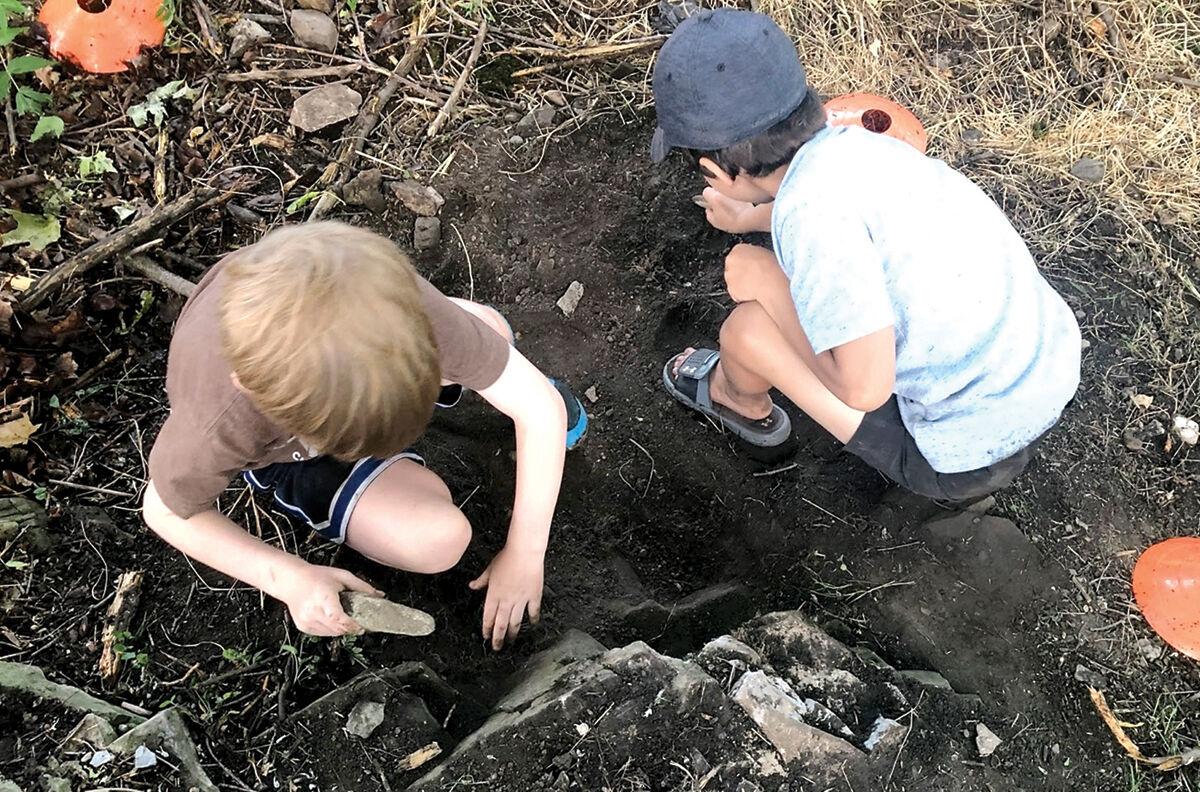 The Chipmunk class at Annette’s Preschool enjoys a socially distanced snack after a morning hike. 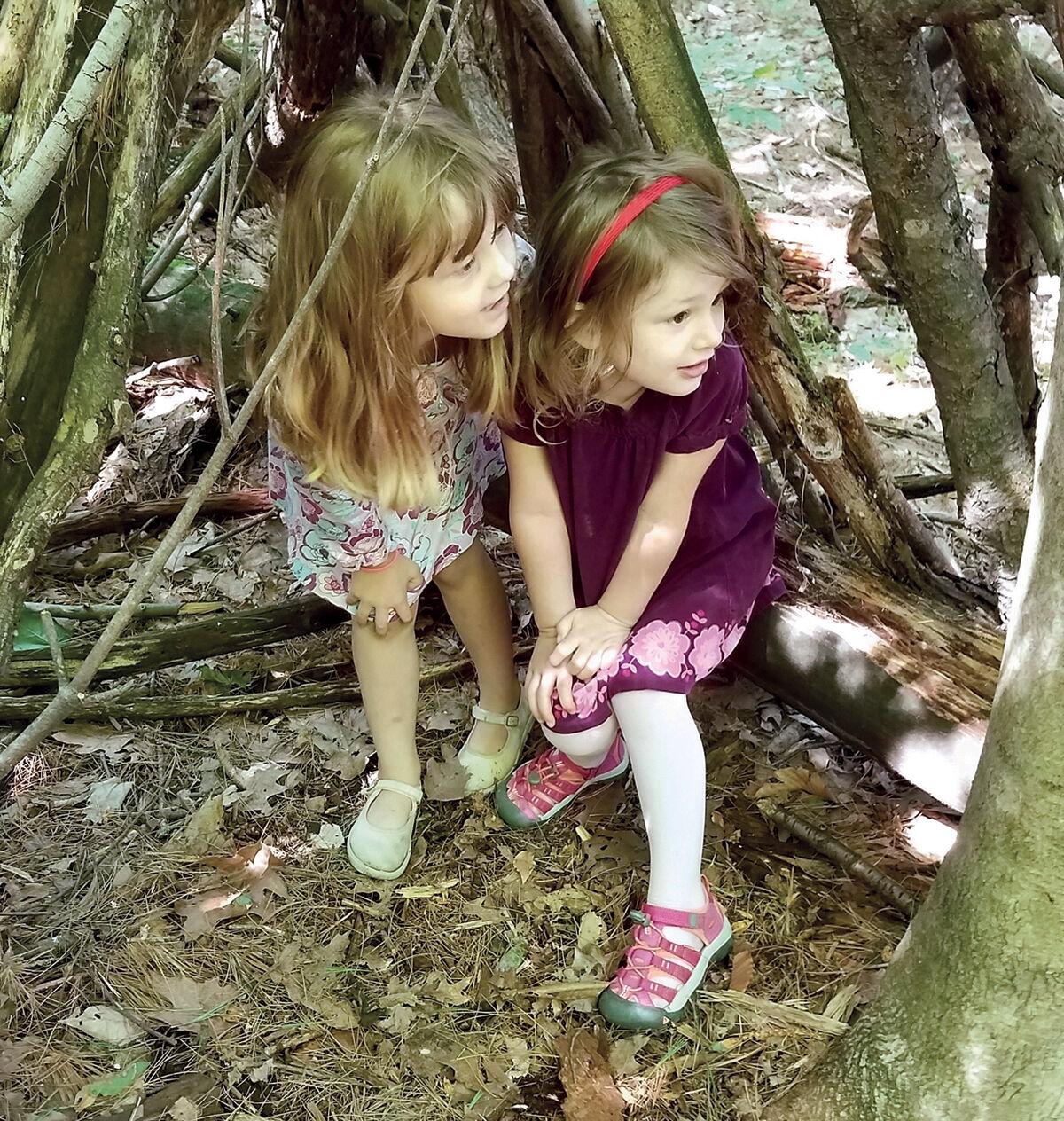 Eleanor Smith (at left in the floral dress) explores the outdoors with her friend in their new, home-based childcare.

Aisling Booska, of Bristol, creates a mud kitchen in the outdoor classroom in the Little Woods at Annette’s Preschool in Hinesburg.

The Chipmunk class at Annette’s Preschool enjoys a socially distanced snack after a morning hike.

Eleanor Smith (at left in the floral dress) explores the outdoors with her friend in their new, home-based childcare.

Like most people, Julie Buechler met the March closure of businesses with confusion.

The director of Ascension Childcare in Shelburne had to pivot hard following the COVID-19 related shutdown of her center.

“I think we all kind of thought it was only going to be a few weeks,” she said.

Of course, it ended up lasting much longer. But Buechler and her staff busied themselves with family outreach and setting up virtual learning.

In June, the center got the green light to reopen, but had to balance trepidation of both parents and staff.

“It was definitely a big responsibility to hold so many people’s best interests at heart. The uncertainty was really unsettling for me. But at the same time, I knew so many families were struggling, making their lives work with child care being closed,” Buechler said.

She was also inspired by the importance of early childhood socialization.

“When you hear the phrase, ‘It takes a village to raise a child,’ for those that attend child care, we are their village,” Buechler said.

Not everyone stuck with Ascension through the transition. Buechler lost a few families who were working from home and elected to care for their kids themselves. She also lost some staff members who decided they were not ready to return.

But the team kept on. And while adjusting to the state’s new health and safety guidelines seemed daunting at first, Buechler and her staff realized it wasn’t that different from normal practices after all.

Workers, students, parents and visitors were well accustomed to washing their hands at the sink inside the center’s lobby. And teachers were already used to frequent cleanings.

The biggest learning curve was adjusting students to seeing their teachers in masks.

“Children are wonderfully resilient, and they adjust to change, I think, quickly and almost, in this case, more efficiently than most adults have,” Buechler said. “Now that we’ve been doing this for almost 12 weeks it’s like they are looking past it now. They just see the teacher as someone who wears a mask.”

Buechler said she feels confident about the center’s ability to keep its families healthy and safe. But she does have some concern about the Chittenden County area’s ability to keep COVID-19 caseloads down with colleges and public schools reopening.

“We haven’t seen any of these other industries reopen throughout this whole time. So, I am curious to see how that affects the greater community,” she said.

Vermont has historically faced challenges with meeting child care needs. Families recount tales of having to get on child care waiting lists before becoming pregnant to snag a spot in time. Even with families now opting to care for their kids at home or with relatives, Buechler said it’s hard to predict if that will ease the demand on the state’s child care centers.

“I still think there is a crisis, absolutely, because a lot of centers have unfortunately closed because of the pandemic. So even though the number of families looking for care may have shifted, there are now less spots available,” she said.

A parent takes the reigns

Rachel Smith’s daughter, Eleanor, was a student at Ascension Childcare up until the pandemic.

As the world shut down, so too did Smith’s jobs, as a teacher at the Flynn Center for the Performing Arts and a developmental music and movement instructor.

It was then that the Shelburne mom decided to care for Eleanor full-time, soon creating a “pod” with a child from another family.

“We were talking about the difficulties of going back to school with all the new regulations and the masks and how hard it was going to be, and we just came to the conclusion together,” Smith said.

With the decision made, she threw herself into child care and early education — her background as a preschool teacher coming in handy.

“It helps that I have a lot of experience in finding activities and in conflict-resolution and managing emotions with little ones,” Smith said.

The trio has spent summer days playing, going for hikes and establishing a daily routine to help create normalcy.

They even spent two weeks writing, rehearsing and making costumes for a play that they put on for an audience of seven family members.

As Eleanor and her pod-mate will enter kindergarten this fall, under the hybrid in-school and remote model, Smith said she may keep up child care as needed. But she is hopeful that she can return to working in musical education, aiming for January.

Andrea Sambrook, director of Annette’s Preschool in Hinesburg, had to think fast this spring. After a March 18 staff meeting, Sambrook and her colleagues thought about how to bring their nature-based early learning program to the screen.

“We did absolutely the best we could, but it definitely felt unnatural,” Sambrook said.

As the closure dragged on Annette’s received stabilization funds from the state, which Sambrook said was a lifesaver for the staff. From there, they kept up online learning, waiting for the day they could invite kids back.

That happened on March 31, when Sambrook was okayed to provide in-person care for essential workers’ children. Annette’s opened once more, with about five students, three days a week.

In June, Annette’s expanded its operations to allow more students in-person, for two days a week.

“Early educators work very long hours and with the huge, big emotions of all the children, and their parents sometimes, and this is a huge ask, everybody’s returning in the face of a pandemic,” Sambrook said.

“Everybody’s been touched by COVID. There’s no one way to do it and there’s no better or worse or more harm or less harm,” Sambrook said.

One teacher left the center because of heightened health risks, but hopes to return, Sambrook said. A few families have left, and new families have joined as other area centers permanently close their doors.

Things aren’t up to full capacity yet.

Students at Annette’s are already used to spending much of their learning time outside.

“We’re playing outside probably 90 percent of the day,” Sambrook said.

While one group played in a field at an “archeological dig,” another turned a sandbox into their own imaginative world.

“It became a bank, it became a mine, it became a sawmill. My heart was just singing with the joy and the creativity that these kids had when they had the opportunity for deep play,” Sambrook said.

As the weather turns cooler this fall and winter students and teachers will have to spend more time inside. Sambrook believes that open windows, new air filtration devices and some warm winter clothes will allow for a mix of indoor and outdoor learning, though.

“We just want to take it really slowly,” Sambrook said of changes. “It’s important that as we build forward, we’re building stronger.”