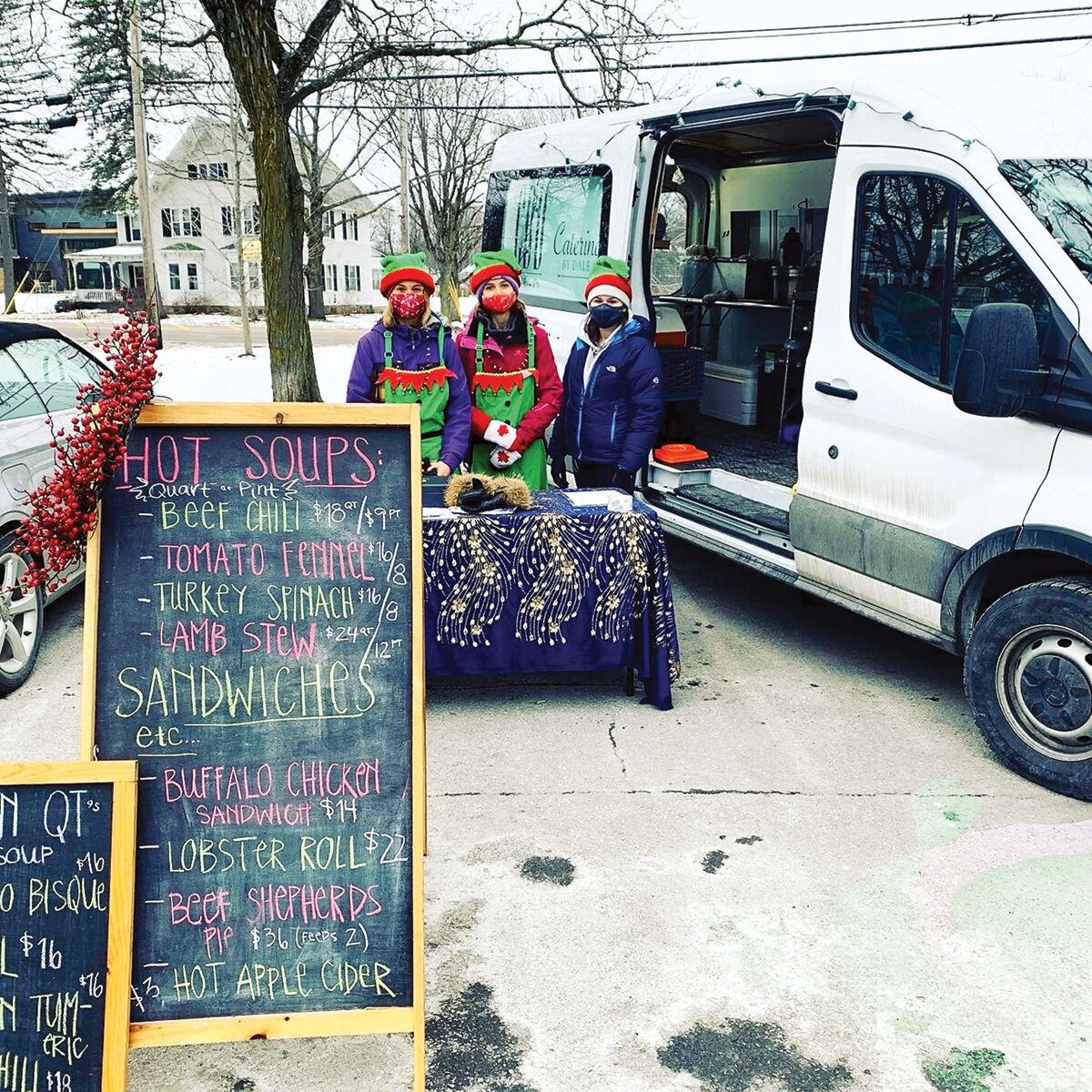 A trio of elves taking orders for the CBD food truck outside the Shelburne Country Store in the fall. 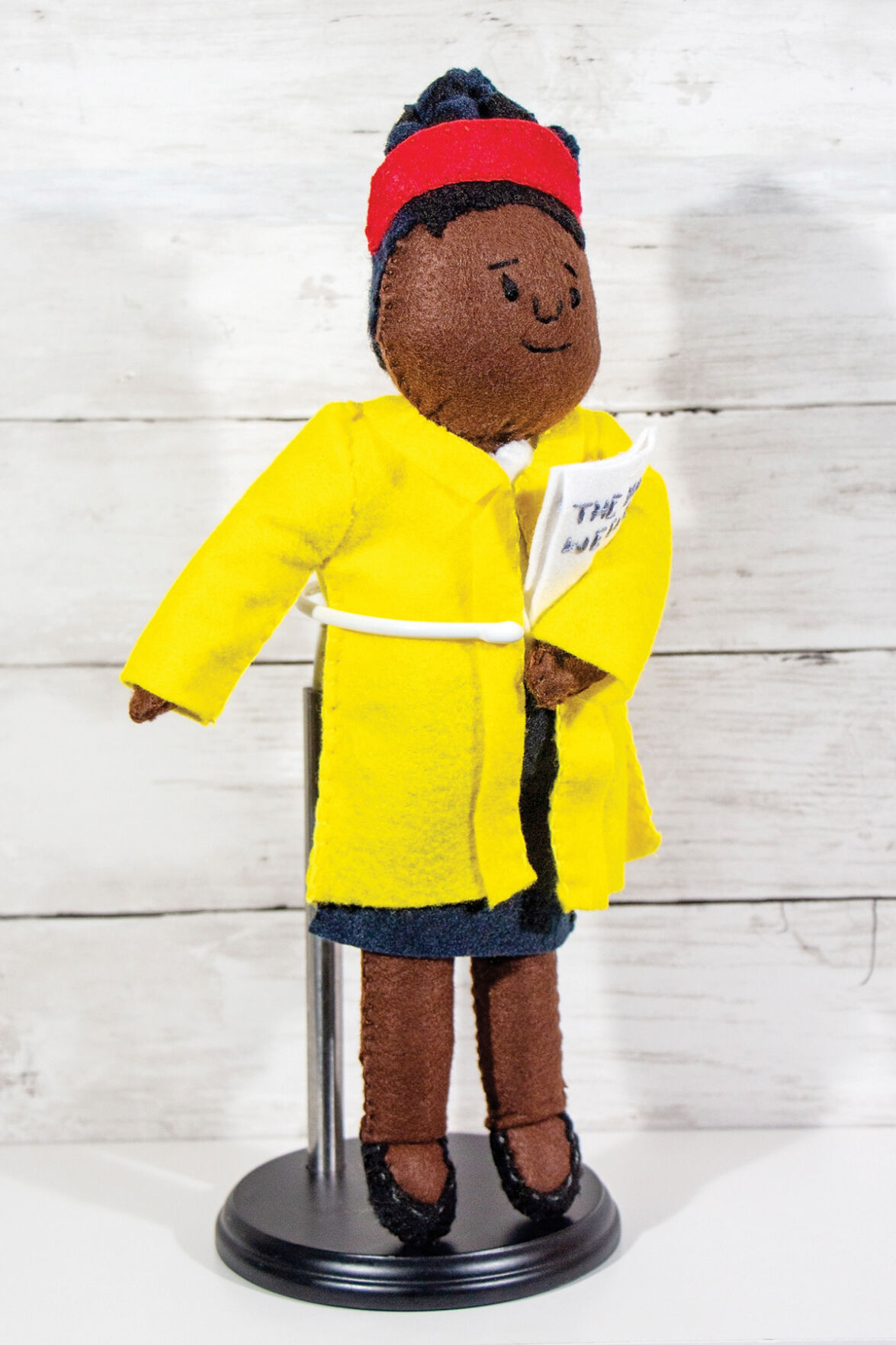 Meredith Gordan was inspired to make an Amanda Gorman plushy after hearing the National Youth Poet Laureate read at the Presidential Inauguration. 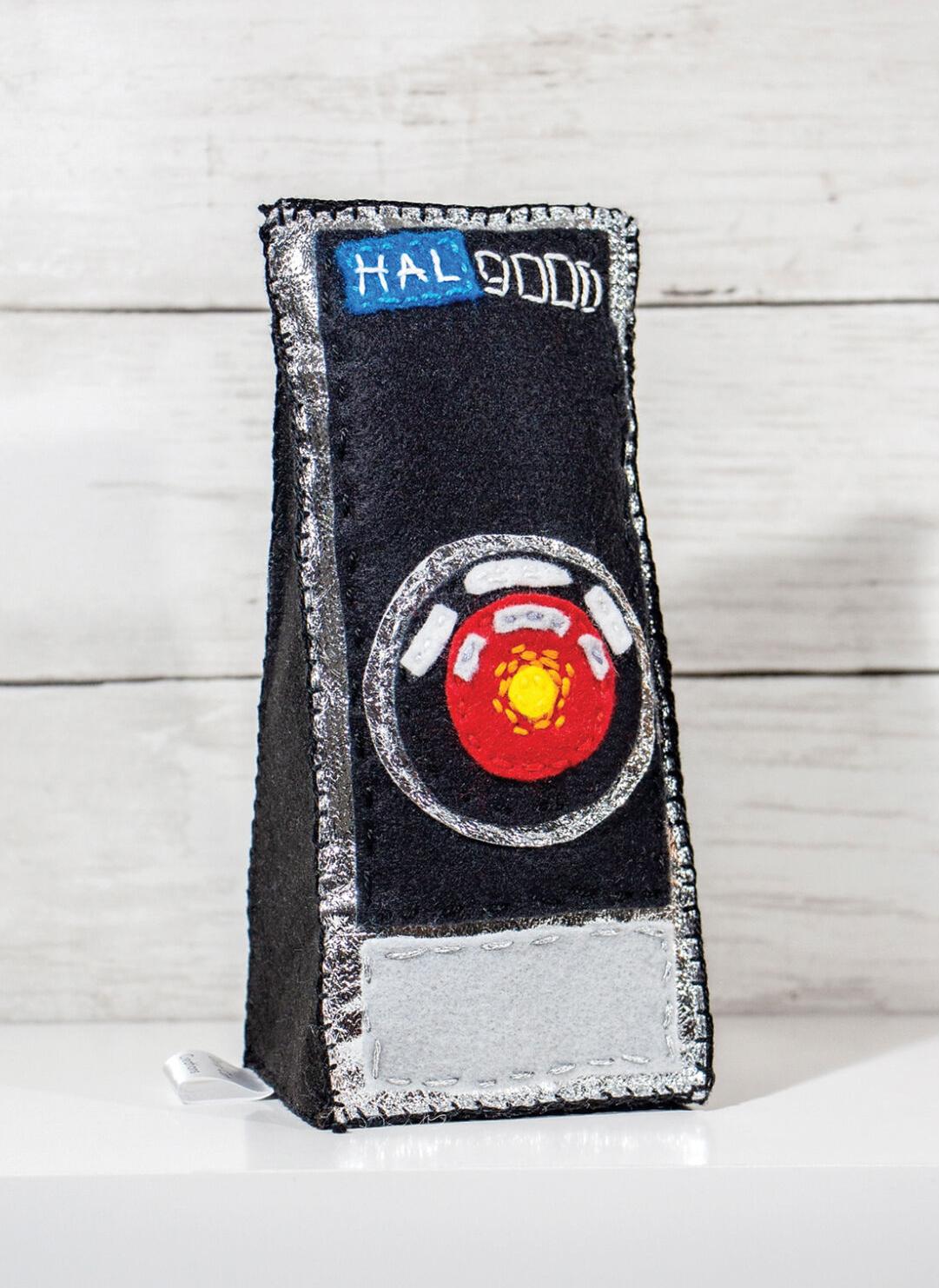 Hal, the computer from “2001: A Space Odyssey,” became a Deep Cut Creation plushy. 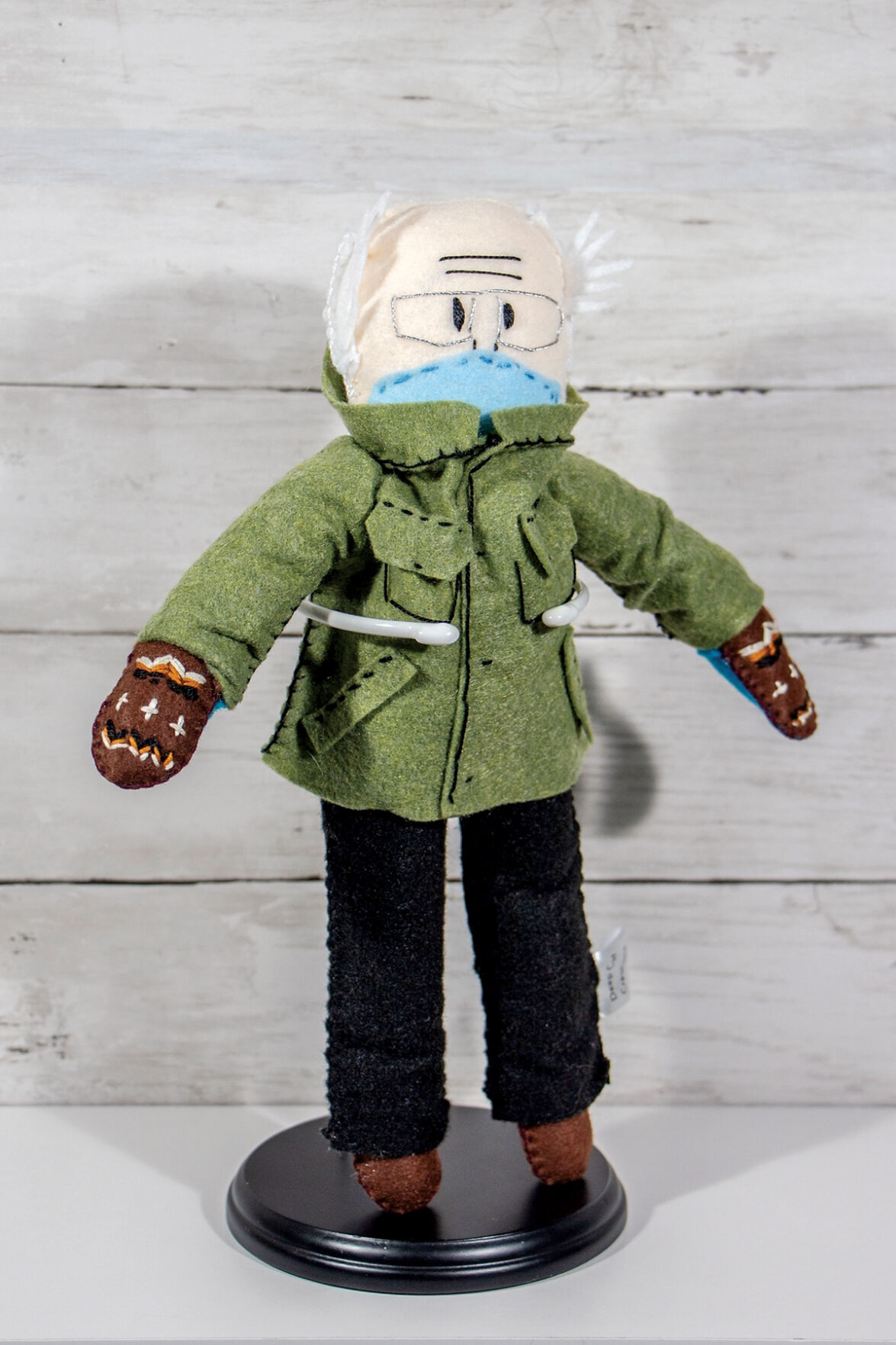 When a mittened Bernie Sanders became a thing, Meredith Gordon realized it was a thing ripe for a plushy. 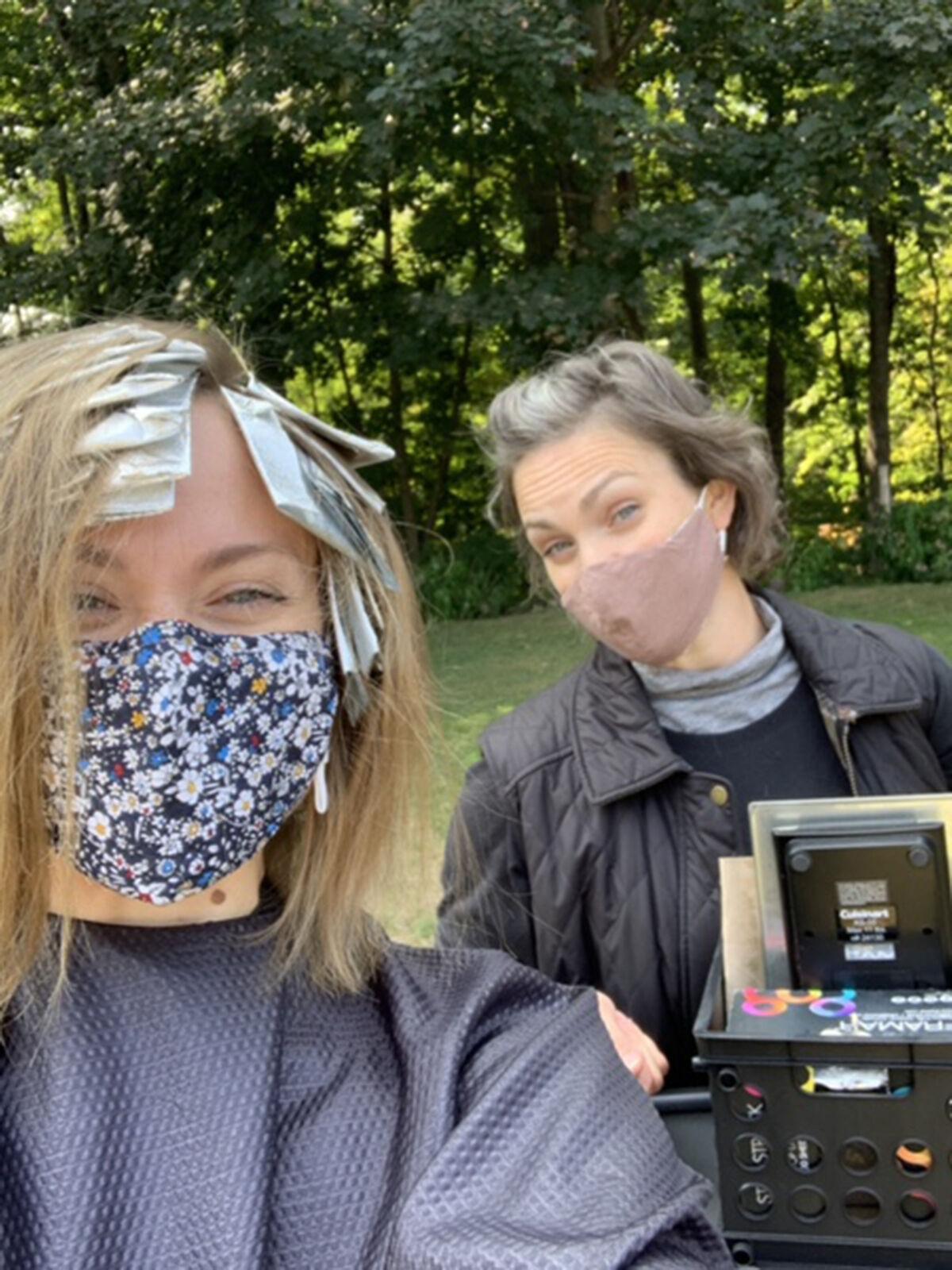 Willow B. Gordon pivoted to haircutting in a busy salon to making house calls with her instruments to give haircuts outside.

A trio of elves taking orders for the CBD food truck outside the Shelburne Country Store in the fall.

Meredith Gordan was inspired to make an Amanda Gorman plushy after hearing the National Youth Poet Laureate read at the Presidential Inauguration.

Hal, the computer from “2001: A Space Odyssey,” became a Deep Cut Creation plushy.

When a mittened Bernie Sanders became a thing, Meredith Gordon realized it was a thing ripe for a plushy.

Willow B. Gordon pivoted to haircutting in a busy salon to making house calls with her instruments to give haircuts outside.

This story has been updated since originally reported.

In the face of lost jobs, layoffs and reduced hours, many have relied on improvisational skills to keep funds coming in.

Susan Thompson, of Grand Isle, in 2017 bought Catering by Dale, which also goes by the name CBD Events. She described it as a high-end, premier caterer, preparing meals at people’s homes, corporate gatherings, weddings, meetings, bar mitzvahs, birthday parties – “you name it,” she said.

Her business primarily catered to events prohibited by the state’s COVID mitigation orders.

“In May, three weddings canceled, and I woke up and said, ‘Forget it. We’ve got to do something different,’” Thompson said.

Thompson already had a food truck but it was a side-hustle and not central to her business. She decided to focus on it.

“One door closed, and another door opened,” she said.

The CBD food truck has proven to be a hit at such places as Palmer’s Sugar House, the Shelburne Country Store and the Country Christmas Loft, the Green Frog Gifts & Clothing in South Hero, Kraemer and Kin in Grand Isle and Point Bay Marina in Charlotte.

Things went so well at the Shelburne Country Store Thompson kept her food truck open much longer into the fall than she had intended before shutting it down for the winter.

Although she kept business going and a small staff employed, her income is down by at least 90 percent, Thompson said. She plans to have the food truck back out in the spring.

“I can’t wait to get back to normal,” Thompson said. “But the food truck kept our name out there, and I developed a lot of new clientele.”

Before the pandemic Meredith Gordon, of Shelburne, was a stay-at-home mom. When her husband Andy’s company downsized and his hours were cut by half, she began looking for new ways to make money.

She was making cider doughnuts at Shelburne Orchards during the 2020 season, then worked at Vermont Teddy Bear when inspiration struck.

Gordon began stitching together soft felt dolls, or plushies, based on characters from some of her favorite movies.

“I had this idea of making little dolls from different movies and got addicted to it,” Gordon said.

She sells her work on Etsy as Deep Cut Creations, referencing her penchant for the lesser known.

Her first project was sewing a doll of Billy Batts from “Goodfellas,” who is killed early in the movie and isn’t a major character. Gordon said she generally picks “side characters” for her plush creatures.

She sews by hand and likes working with felt because it doesn’t unravel.

Gordon’s father passed away about 10 years ago and one of his favorite movies was “Jaws.”

“I don’t remember a time when my dad and I weren’t going to that movie together,” she said. “My husband and I watch it every Fourth of July because, in the movie, they close the beaches on the Fourth of July.”

So, one of her early projects was making replicas of Chief Brody, Matt Hooper, mayor Matt Vaughn and Quint from “Jaws.”

When she posted online that her “Jaws” collection was complete, her burgeoning fan club was quick to react.

She hadn’t made a shark. That’s an upcoming project.

Gordon has branched out to TV, making plushies from programs including “Twin Peaks,” “Barry” and “Arrested Development.”

She said she sews all the time – into the night, up at 5:30 a.m. before work and on her breaks at Vermont Teddy Bear.

“My husband found felt in his dinner,” Gordon said.

As a physics and math tutor, what Shari Bell, of Charlotte, does for a living has not changed that much. Her method, though, is a different story.

In the spring when the pandemic hit, Bell suddenly didn’t have many students to tutor, but that began to change as some students realized they needed help with remote learning.

Bell said some of the students are having difficulty with classes changing to fewer but more concentrated subjects per semester at Champlain Valley Union High School. Most students are taking three subjects a semester and many of these subjects are taught for just half the year when, before COVID, they were taught for the full year.

“A student taking Algebra 1 this fall won’t have Algebra 2 until next fall, so they have spring and summer to forget what they have learned,” Bell said.

She sees some students online once a week, practicing with them to help reinforce what they’ve learned until they have that subject again.

Then there are a few students who just can’t manage online learning. “There are some students for which that set up is just not working,” Bell said.

Students who can’t seem to learn online she tutors in-person.

For these few, tutoring either takes place masked, 6-feet apart at their home or in an empty room at Rice Memorial High School.

“The governor has supported doing what needs to be done to educate students,” Bell said.

Creative problem solving has been Willow B. Gordon’s forte during the quarantine.

Gordon, of South Burlington, was working at a big, busy salon in Burlington when the coronavirus hit. She said she didn’t feel comfortable going back to such a busy space when it reopened.

For a few months, she wasn’t sure what to do, then came up with the solution of making house calls to cut hair.

But she didn’t go into houses. She took a chair, her kit of hair cutting implements and cut hair on people’s decks, patios or gardens all over this part of the state, Gordon said.

Gordon said, “It was great actually. I loved it.”

She didn’t come up with this solution until summer and started making house calls July 1. Gordon said she wishes she’d thought of it sooner.

“My clients and I thought we might be able to tough it out through the winter, but that was just wishful thinking,” Gordon said.

She opened a one-person salon, willowbstylist, on Shelburne Road near the Dutch Mill Family Restaurant.

Some clients don’t feel comfortable coming to this space. For those, she turns to Zoom haircut tutorials, watches clients online as they cut their own hair.

Gordon guides them, step by step, through the process.

She said, “That is awesome and so empowering for the client because they just cut their hair. But I’m right there with them, guiding them through it.”