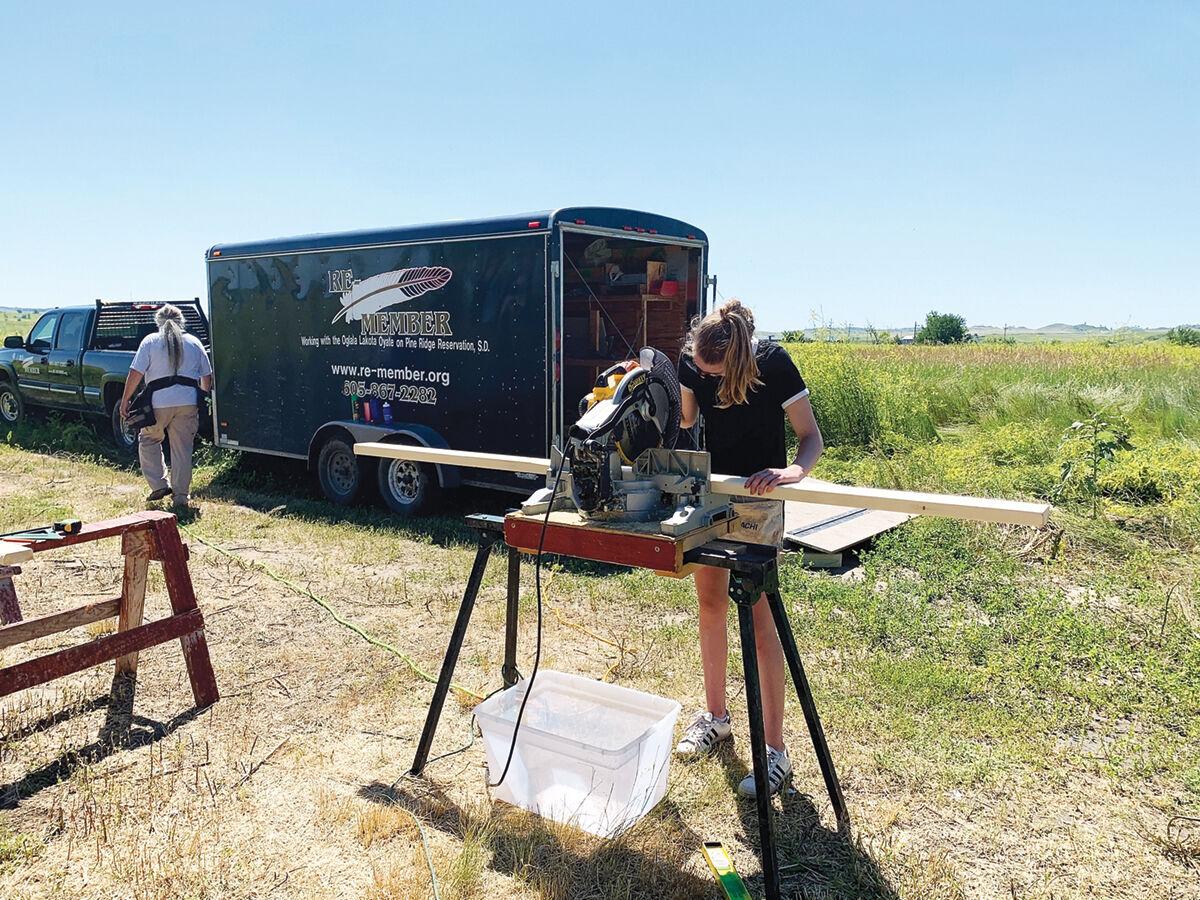 Lucie Webster gets in the thick of things, helping build. 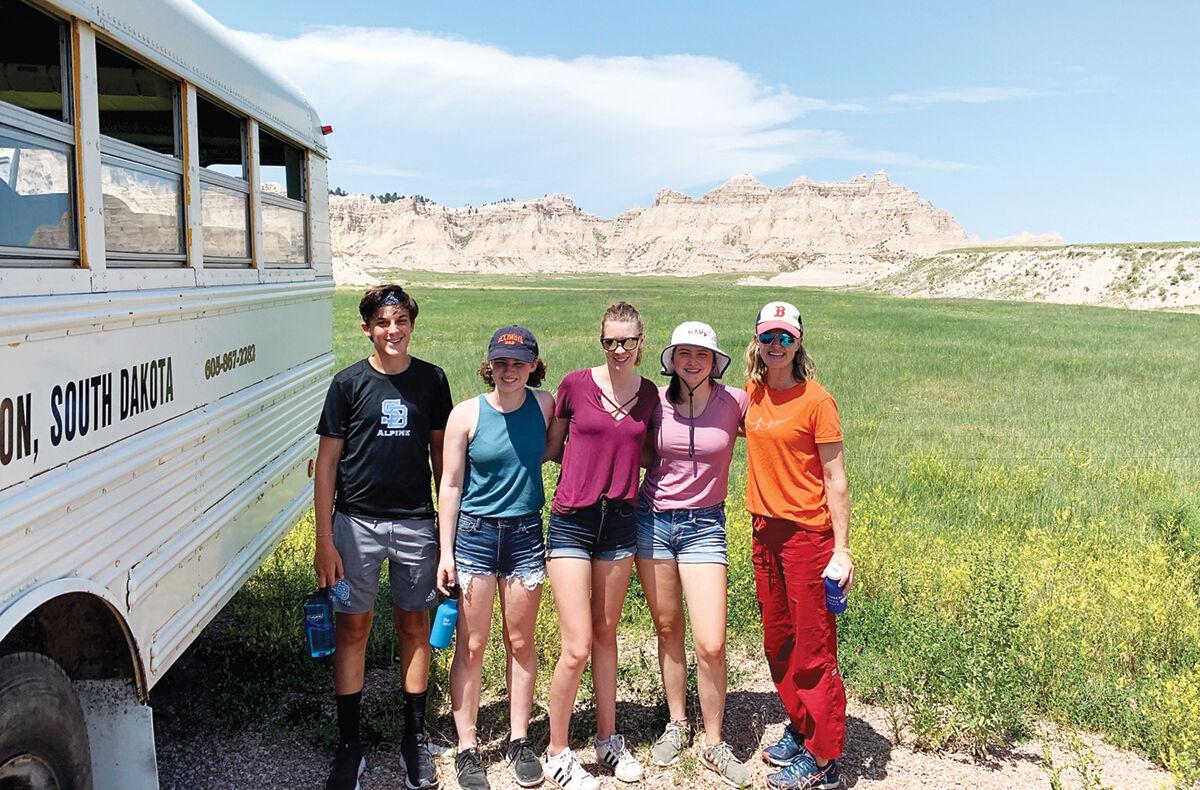 Participates in a Re-Member service trip at Pine Ridge Reservation in South Dakota.

Lucie Webster gets in the thick of things, helping build.

Participates in a Re-Member service trip at Pine Ridge Reservation in South Dakota.

Pine Ridge Reservation in South Dakota is home to the Oglala Sioux tribe, a subtribe of the Lakota people. Though the word Lakota means friends or allies, they’ve long been treated as enemies by white settlers, making life on the reservation far from easy.

What is now Pine Ridge was originally established as a prisoner of war camp for indigenous people, guilty of nothing but living on land their ancestors had cultivated. Their beliefs stood in the way of manifest destiny, so white colonists partitioned and disposed of their land through a string of massacres and broken treaties.

In the summer of 2019, Lucie Webster, a senior at Lake Champlain Waldorf School, took a trip to the Pine Ridge Reservation with Re-Member, a program that brings people to the reservation from all over the world to learn about the Lakota culture, spread awareness of the hardships they’ve endured and work on projects that aid the community.

Knowing the history of the Lakota people’s deep-seated struggles, Webster wasn’t sure what to expect coming into the community as an outsider.

“I definitely felt nervous coming in and not being accepted, which I understood too,” Webster said looking back, but when she and the other volunteers arrived, they were welcomed with open arms.

“I don’t know if surprised is the right word, but there was a part of me that really respected and appreciated how people were able to look past history and notice the work that we were doing and be open and actually wanting to get to know each person individually,” she said.

Inila Wakan is a member of the Lakota tribe, a motivational speaker and the first person that the Re-Member volunteers meet at Pine Ridge.

Though his name means “quiet spirit,” the sense of purpose in his voice echoes loud with inspiration.

When the volunteers arrive, Wakan welcomes them with a prayer and introduces them to a history that departs from the flowery narrative of most grade-school textbooks.

“Our nation has been isolated for a long, long time and the United States has done some serious, outrageous acts against the dignity of our people and our children,” he said.

Just one of the many devastating events that took place at Pine Ridge was the Wounded Knee Massacre.

On Dec. 29, 1890, U.S. troops surrounded a Sioux camp and massacred hundreds of indigenous people, mostly women and children. The harrowing event was disguised as a hard-won battle fought with bravery. Twenty congressional medals of honor for valor were given to the cavalry that stole the lives of so many innocent tribe members.

Legislation to strip the soldiers of their medals was not announced until 2019, a testament to the ceaseless neglect of Native Americans still prevalent today, keeping the wounds of yesterday fresh.

Wakan encourages the Re-Member volunteers to bandage these scars by spreading hope through their work, especially to the younger tribe members.

“Those kids can find hope that maybe the world really isn’t as bad as the trauma they’re being fed,” he said.

Unfortunately, the socio-economic needs of Pine Ridge require more than just hope. It is one of the poorest areas in the United States with a persistent 80-90 percent unemployment rate.

Many of the small homes or trailers on the reservation house three to four families.

The volunteers’ week-long projects might seem small, but they can make a big impact on the community. Something as simple as building a bunk bed could change a family’s life in a home where children are accustomed to sleeping on the dirt floor.

Webster spent her time tending to the community garden, setting up some greenhouses and building a wheelchair access ramp.

During the week living with the Lakota people, Webster saw the perils of extreme poverty up-close for the first time.

“I definitely felt so much more appreciative of the life I have and a part of me felt more driven to give back to my own community and even outside of my community,” she said.

No matter how much she does, Webster’s generous nature always pushes her to do more. Though COVID-19 has halted her plans to return to Pine Ridge and make an even greater impact, she continues to carry the lessons she learned from the reservation into her everyday life.

“Our society could learn so much from their ways. If we had the resilience and open-mindedness and were that welcome, we’d be a much stronger society,” she said.

Re-Member is not currently operating because of COVID-19, but Wakan believes there are ways everyone can help the reservation from home.

“Remember to pray for us,” he said. “We pray for you. That’s how Lakota people pray, we never pray for ourselves. We pray for all the races of mother earth to walk together.”