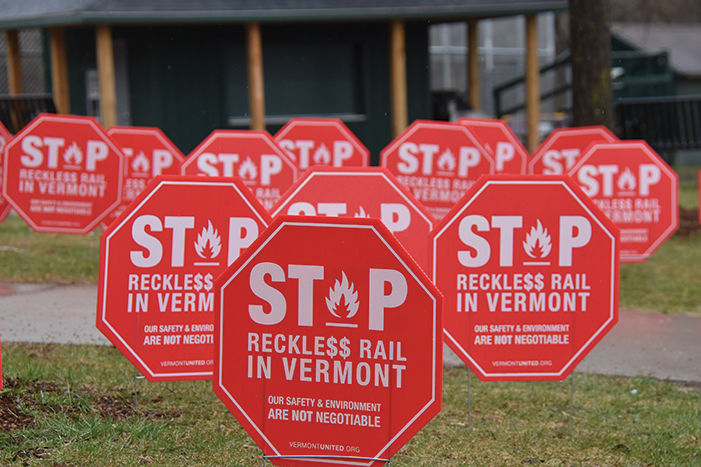 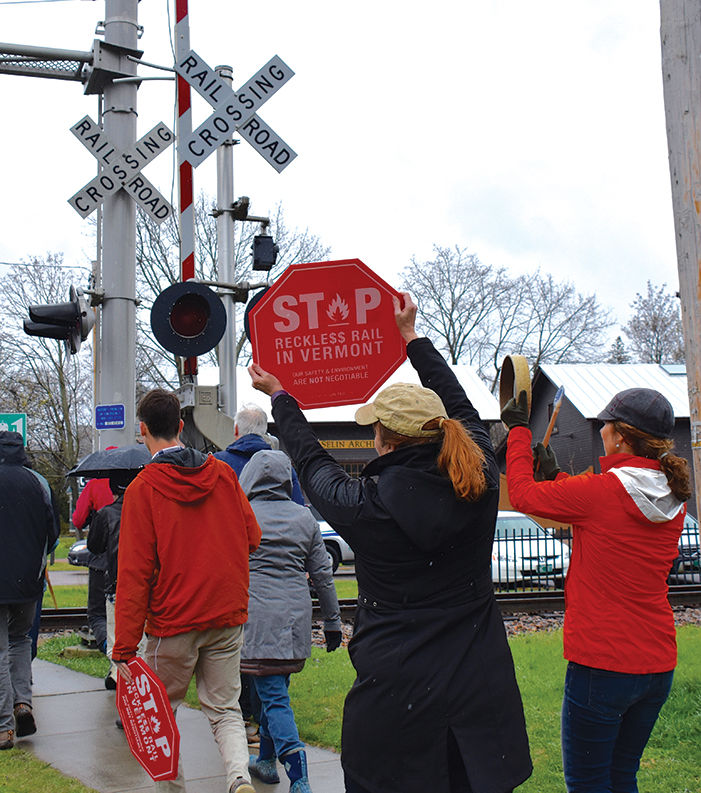 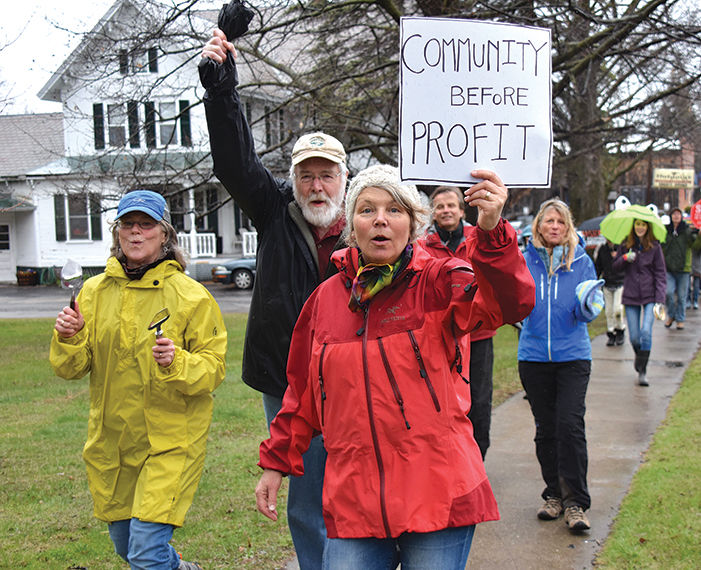 Chanting “Salt sheds no! Watersheds yes!” as they marched through the streets of Shelburne, several hundred protesters braved dreary weather on Sunday, May 1 at the Reckless Rail Rally. Anti-rail activists made plenty of noise as they banged on pots and pans and walked from Shelburne Community School down Harbor Road and onto Route 7.

The protesters were voicing their opposition to Vermont Rail Service’s intermodal facility in Shelburne; planned by community organization Vermont United, the protest was designed to bring local and regional awareness to the facility that is being built next to the LaPlatte River.

Vermont Rail Service purchased the land late last year and immediately clear cut 19 acres. They are currently continuing to ready the site to build the intermodal facility later this spring as legal action progresses through the courts to try and stop or alter the project.

Five speakers addressed the crowd at the town gym after the march. Shelburne Selectboard Chairman Gary von Stange, who has been critical of the project since its inception, kicked off the event with a strong message of resilience.

Many members of the community are extremely concerned about not only about rail safety but the environment as well. Melissa Fletcher of Shelburne attended the event to show support for Vermont United and walk with her friends and neighbors in protest of the intermodal facility.

“Conscientious development is important no matter where it is located, but this project is especially critical given its scale and proximity to the nature preserve, LaPlatte watershed, and town center,” Flethcher said. “I was shocked this winter to see the extent of the clear cutting with no regard to old growth trees. I believe that if this project had been well vetted and designed such massive destruction would not have been necessary. I hope that this rally will make it apparent that no matter the project it is important to respect the environment, work with the community and operate within regulatory standards.”

Event organizers were pleased with the turnout and now have their sights set continuing to spread the word about what Vermont United is trying to accomplish.

“Our next steps are to continue broadening the message statewide and further involving others, especially our youth,” said Vermont United member Derrick Senior. “We really need to see action at the state level to insure that our communities, environment and safety are placed ahead of freight rail profits.”

This week is a pivotal one as the US District Court will hear the case of Shelburne and Vermont Rail Systems.

“We shall fight in the courts, we shall fight with state agencies to enforce our statues, enforce contracts with the railway and not pander to special interest groups like Vermont Railway,” said von Stange. “We will not surrender. We stand tall and we will not be bullied. This town does not live on its knees.”

Sonja Janjic wants kids to have time to be kids.

Get ‘em while the getting is good

Cookie season is here, with choice treats up for grabs. The Girl Scouts of the Green and White Mountains announced the beginning of cookie booth sales.

The Valentine’s Day spirit was alive and well at Rustic Roots Craft Eatery in Shelburne, for the fourth annual heART Show fundraiser.