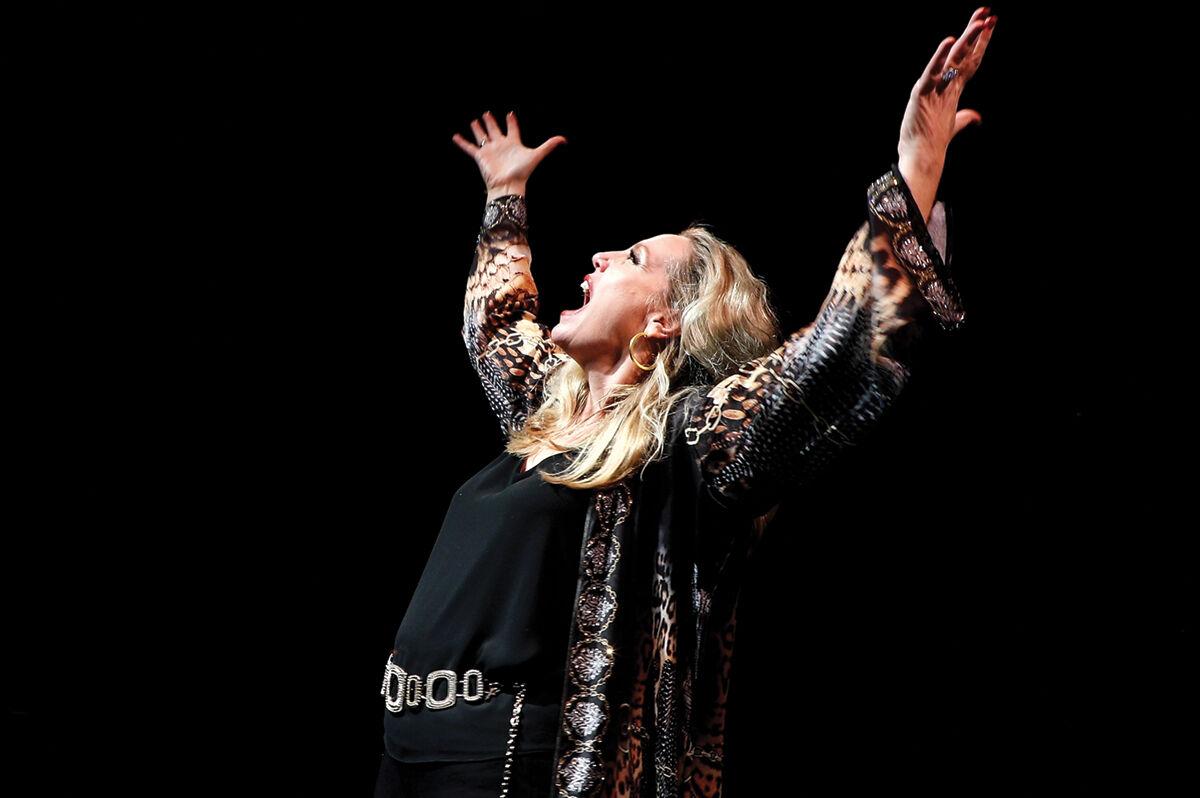 Jen Warwick in a scene from ‘Songs For A New World.’ 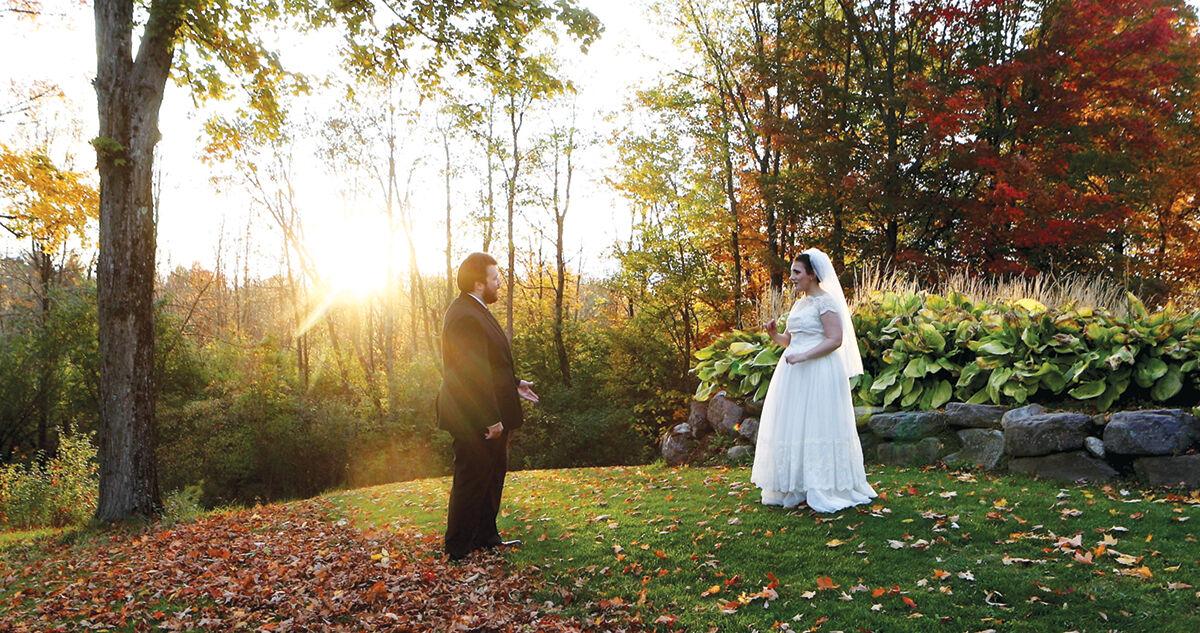 Connor Kendall and Kaitie Bessette in a scene from ‘Songs For A New World.’ 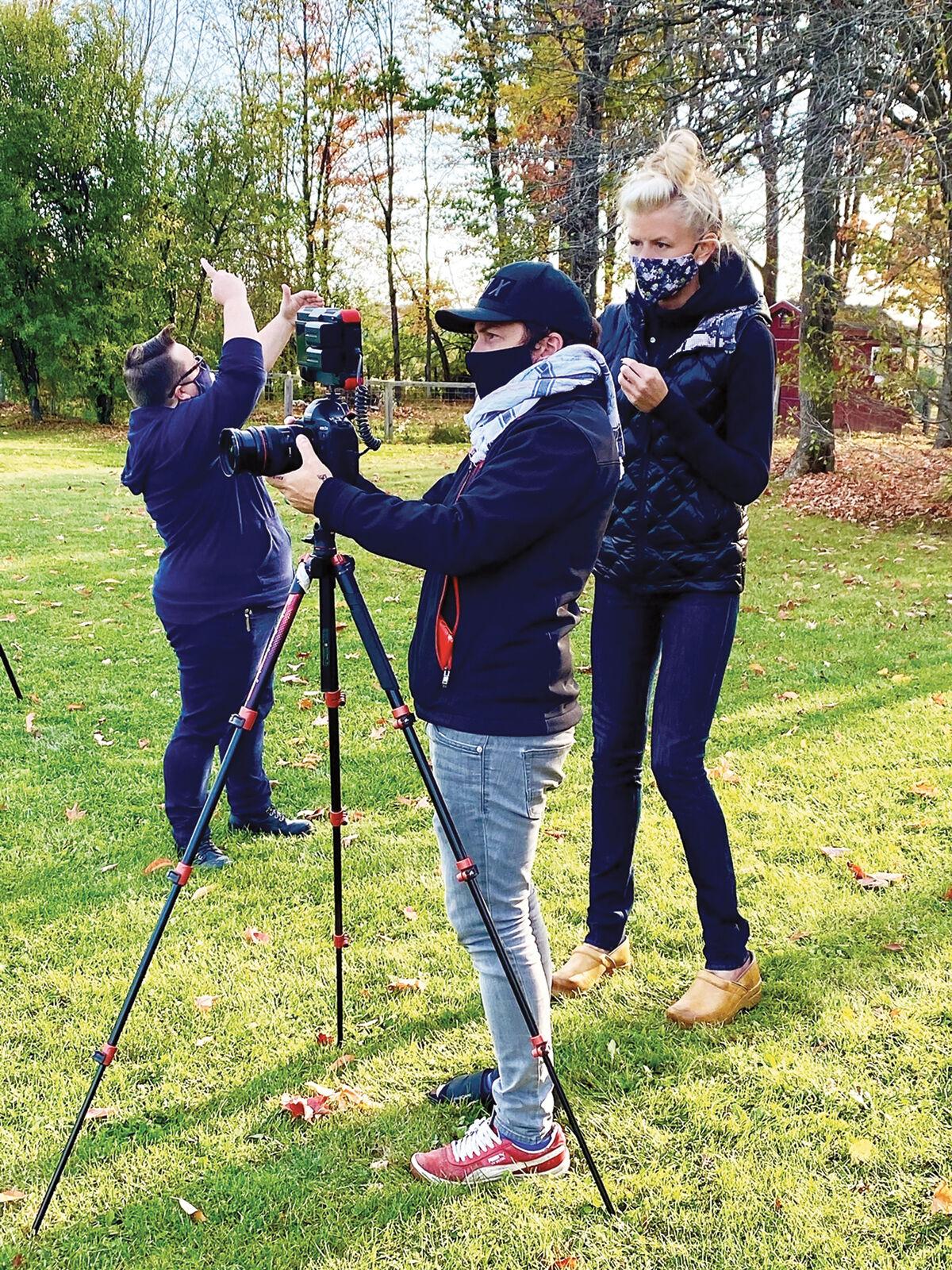 ‘Songs for a New World’ on location in Hinesburg. Cat Meyers, lighting designer checks the sunlight/cloud pattern while James Buck, videographer, and Brita Down, artistic director, set up the shot. 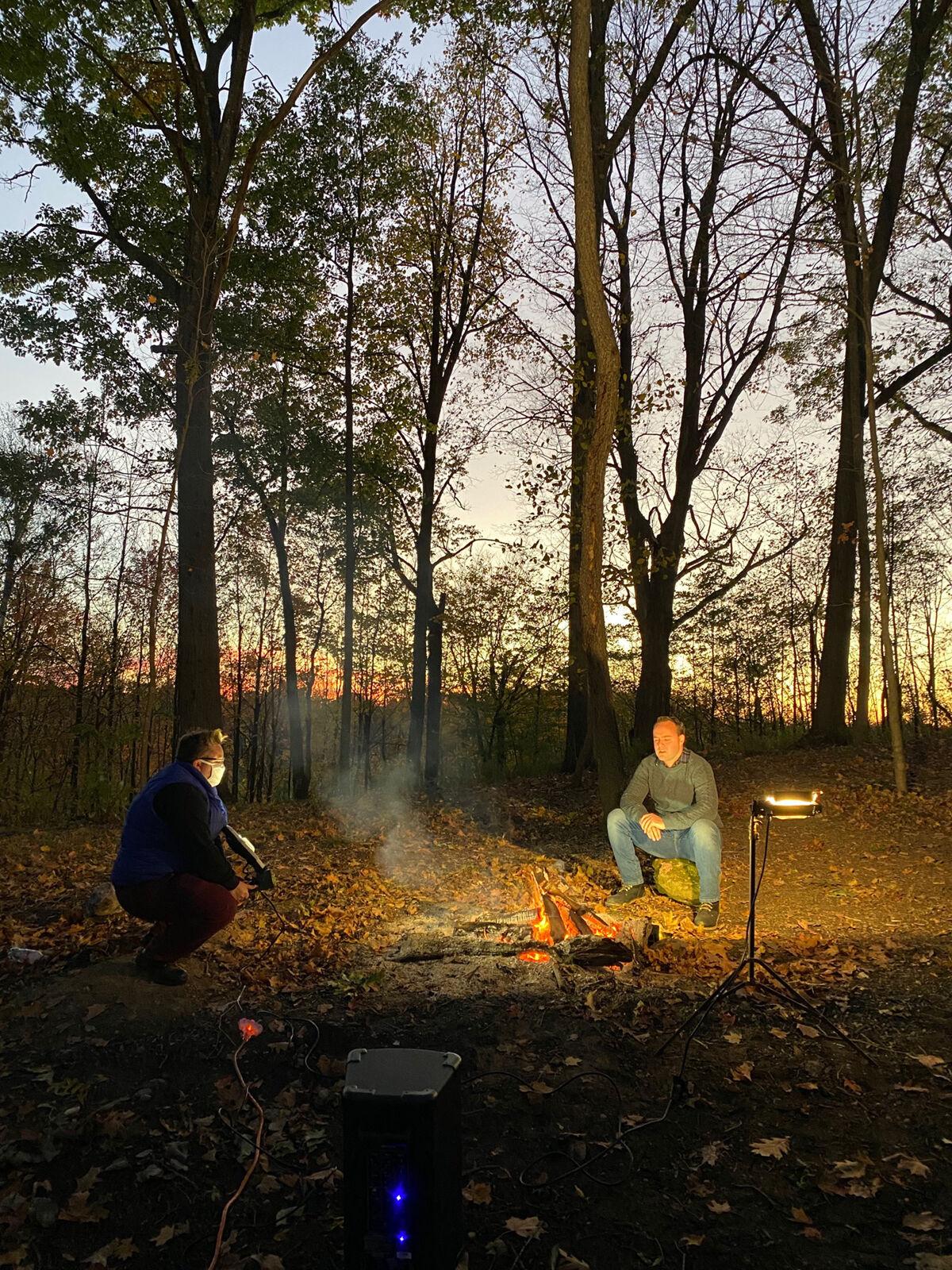 Cat Meyers lights Jayden Choquette, vocalist, for his scene on location in Hinesburg. 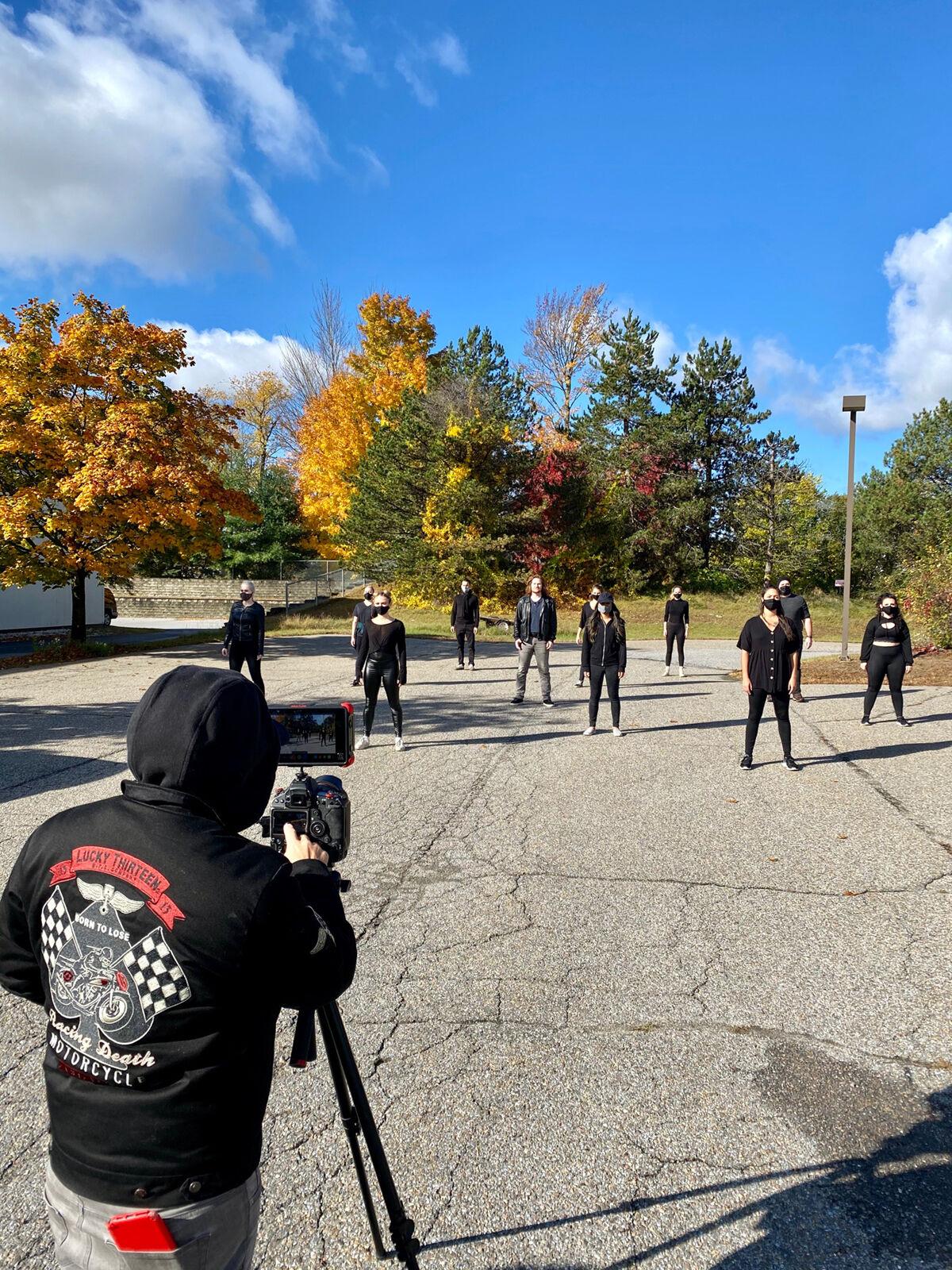 Dancers and vocalists perform masked to film a scene on location at Lyric Theatre.

Jen Warwick in a scene from ‘Songs For A New World.’

Connor Kendall and Kaitie Bessette in a scene from ‘Songs For A New World.’

‘Songs for a New World’ on location in Hinesburg. Cat Meyers, lighting designer checks the sunlight/cloud pattern while James Buck, videographer, and Brita Down, artistic director, set up the shot.

Cat Meyers lights Jayden Choquette, vocalist, for his scene on location in Hinesburg.

Dancers and vocalists perform masked to film a scene on location at Lyric Theatre.

During this strange new quarantined existence, it’s hard to imagine Lyric Theatre picking a musical with a more appropriate title for its next production, “Songs for a New World.”

As one might expect, the performances will be virtual, but the rehearsals have been virtual, too — a new world indeed.

The South Burlington-based group, which often performs at the Flynn Center for the Performing Arts in Burlington, filmed its version of “Songs for a New World” it will release it online.

Tickets become available on the Lyric Theatre’s website at lyrictheatrevt.org on Friday, Nov. 13. The online stream will “open” on Nov. 20.

Once accessed, the online performance can be watched for 48 hours.

The show will stream from Nov. 20-Dec. 19, with tickets priced at $15 for one person and $35 for a family. Evarts said they are counting on the honesty of their audience to not buy a single ticket and watch with more than one person.

Needless to say, rehearsals and filming have been unique and a learning experience for an organization dedicated to live performances.

Many of the rehearsals were done online, said Evart, to diminish the chance of transmitting the virus. When the cast was together, they were socially distanced and masked.

“Songs for a New World” lends itself to the process they used for rehearsals and filming because it is a song cycle.

“This is not a traditional musical that’s plot driven,” director Brita Down said. “It’s a song cycle with a group of songs that follow a similar theme.”

The theme is appropriate for this time because the show concerns unconnected characters who are all dealing with change.

Down said the show, by Jason Robert Brown, which was a success on Broadway and London and has become popular around the country, is usually performed with four actors who play all the different characters. Lyric has chosen to cast 16 singers and eight dancers for its version.

Some people may recognize Brown for his music and lyrics for “Parade” and “The Bridges of Madison County.” “Songs for a New World,” his first produced musical, opened off-Broadway in 1995.

Down lived in South Burlington for a couple of years, and in Stowe from 2015-17, where she appeared in “The Rocky Horror Show” and “The Addams Family” and directed “Heathers: The Musical” for the Stowe Theatre Guild.

Down has made directing choices that make the musical even more appropriate for our time. For example, in a scene where an actor is traditionally staged as a woman sewing a flag during the Revolutionary War, Down has the actor sing while sewing masks to protect against the coronavirus.

The actor sings about sewing one more star, one more stripe, but it’s really about what she can do to make a difference, said Evart.

This choice resonates and pays homage to the activities of Lyric volunteers during the pandemic. The theater transitioned its costume shop and volunteers to making masks when these were in short supply shortly after the start of the quarantine.

Evart said the Lyric’s team of volunteers made around 24,000 masks in collaboration with the city of Burlington.

One of the show’s 16 vignettes revolves around a song called “On the Deck of a Spanish Sailing Ship,” traditionally staged as a song about Jewish refuges leaving Europe during the Middle Ages, Evart said.

She applauded the way in which Down exercised her creative license in staging this song as a group of doctors and nurses on the treacherous metaphorical journey of COVID-19, not sure of what is on the other side but striving to keep helping people and moving forward.

Keeping the thrill of live performance

Down said the video has been filmed to mimic a theatrical experience. In a theater production your eye can choose where to look but in a traditional movie you have to follow the action the way the moviemakers want you to. She said they have chosen to have the actors move in a space.

“You can enjoy this production the way you would watching a play,” Down said.

Evart said they had the actors record their vocals at home so they went into their closets or anywhere that they could sing out loud and not record extraneous background noises.

The technical team put together the songs with the actors’ voices and backing music combined. When the scenes were shot they took off their masks and lip synced to their own vocals minimizing the risk of spreading the virus, Evart said.

“It’s been super cool to see people get into it,” she said.

“Many songs were done in one take because we wanted to give the feel of live theater,” Evarts said.

Kendall said they had worked hard to bring the same energy to the film as they do for the stage.

He feels they succeeded. He should know.

Kendall started studying and performing with Lyric Theatre when he was around 11 years old. He’s 27 now and a veteran of Lyric productions.

His grandmother Mirianne Kendall was a founding member of Lyric Theatre. His grandfather, father, mother and sister have all be heavily involved with the theatre, too.