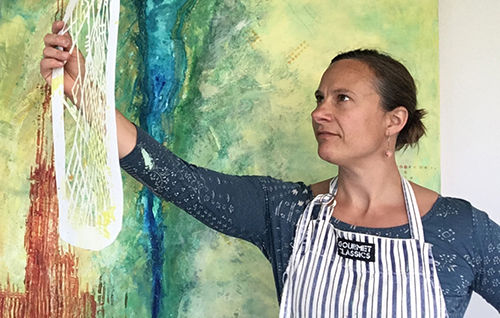 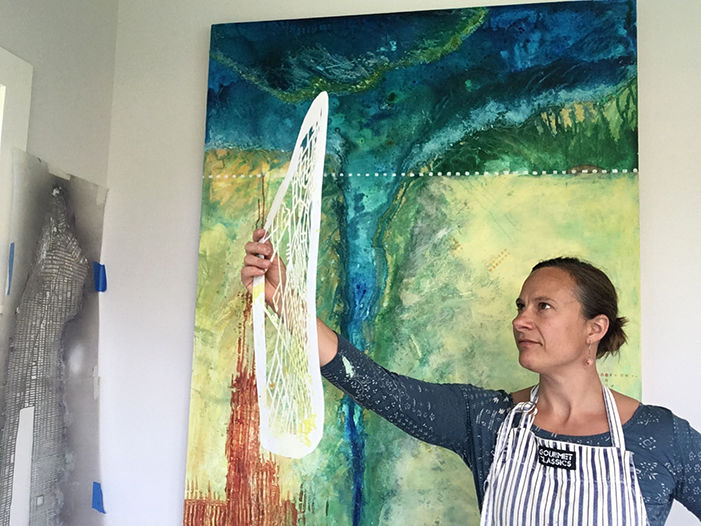 Jessica Scriver started her collegiate career studying art at Indiana University, but a combination of factors led her to believe that wasn’t a practical plan of action. She switched to biology, and after graduation she taught physics and chemistry at a boarding school in Connecticut, but art was never far from her mind.

Scriver’s great-great-uncle had been a woodblock printer and it was through him that she realized she could have art as a profession.

While in Connecticut, she befriended an art teacher who gave her some studio space and she took classes at the Rhode Island School of Design. The resulting artwork was informed by her science background. Although Scriver paints mostly landscapes, she often adds additional symbolism.

“My eye is drawn to science-y forms,” Scriver said. “I’ve been trying to develop a visual language that represents the inner-connectedness of organizations.”

As an example, Scriver points to the differences in how water flows and is used in different parts of the country. In the West, satellite images show either circular patches of green in the middle of the desert or linear plots between irrigation ditches. “In Vermont,” she said, “agriculture seems more organic.”

Scriver was invited to take part in the annual Of Land and Local exhibition at Shelburne Farms this fall, where she will display some of her agricultural-based works of art.

Initially, Scriver painted in oils but switched to acrylics when she became pregnant with her first child because she worried about the health effects of the solvents. The change in medium affected her style, as she moved away from direct representational art.

“I started playing around with other materials,” she said, “and incorporating things like wool, yarn, string, and collage maps. Acrylic is a very versatile medium.”

Later, inspired by Burlington artist Linda Jones, she tried encaustic painting, which is done with hot wax. “It’s a bit unwieldy,” she said “because you need a heated palette and if the wax gets too hot it starts smoking and the fumes are unhealthy.”

Scriver was born in Ohio and lived in Burlington from 2003 to 2012 while her husband completed his medical residency. They moved to Colorado for his work but jumped at the opportunity to return to Vermont when a position opened here.

The couple was looking at houses online but had one weekend to tour Vermont and found their house in Charlotte. They moved in July of last year.

This year, Scriver took part in her first Open Studio Tour during the Memorial Day Weekend. It was there that the curator for Of Land and Local discovered her work and invited her to take part in the exhibit.

Another outcome of that weekend was that Scriver got to meet more of her neighbors. “There was a steady stream of people coming through,” she said “and it was very rewarding.”

Scriver likes the way both macro and micro views of different things can be similar. “The branching of blood vessels can look like a river delta,” she said, “and our city grids look like neural networks. How things look under a microscope can be very similar to what you’d find on the universe level.

“These are things I think about when I’m painting.”