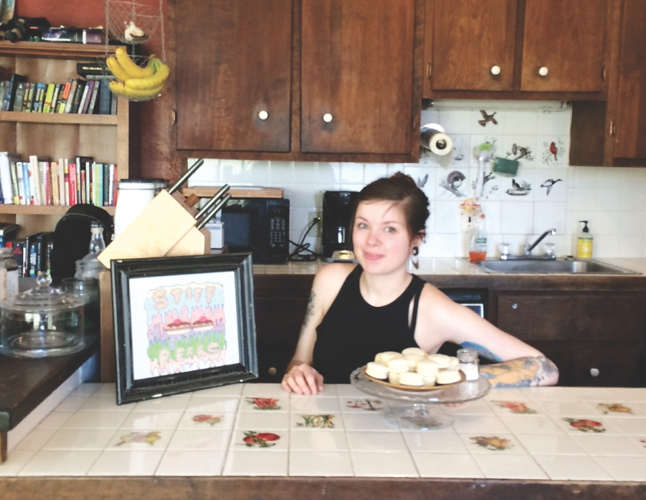 Lauren Schalski in her Stowe kitchen with a plate of Stiff Peaks macarons. 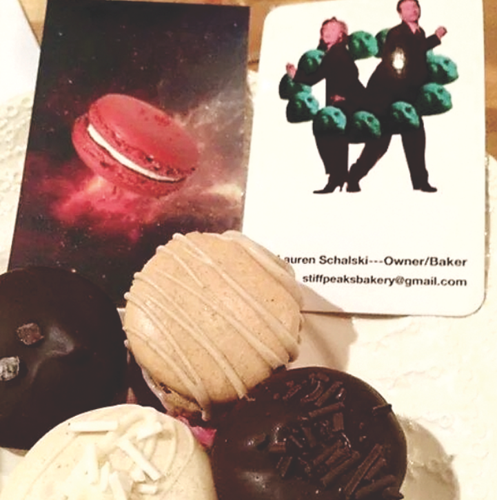 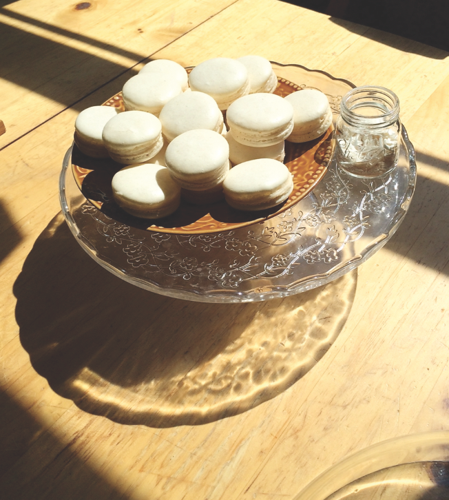 An up-close look at the goodies.

Lauren Schalski in her Stowe kitchen with a plate of Stiff Peaks macarons.

An up-close look at the goodies.

“There’s a world of difference,” Schalski said during an interview at her Stowe home, where she runs her business, Stiff Peak Macarons.

While both types of cookie originated in France, macaroons are made from egg whites, sugar and coconut. Macarons are almond-flour-based cookies held together with a cream, curd, or fruit-based filling.

Schalski works nights as a bartender at the Blackback Pub in Waterbury. She’s put her knowledge about liquor to good use in her macaron business.

“I bake what I want to eat — and drink,” she said. “I’ve been bartending for seven years and baking in my spare time, so naturally I gravitate toward great bourbon and even better sweets, so combining the two together just seemed like the obvious path to take.”

Schalski is from the Annapolis, Md., area, where she worked in a bakery that specialized in macarons.

“It was something I enjoyed, but I didn’t enjoy working for someone else and the stress that came with that,” Schalski said.

She moved to Stowe with her boyfriend four years ago, and started Stiff Peaks about 18 months ago.

“I made some macarons for a friend’s birthday party and someone mentioned that I could probably make money selling them,” Schalski said. “People enjoy them so I keep making them.”

She has no formal training as a baker, but has had no trouble developing new recipes and an ever-growing customer base.

“Vermont is very welcoming to small businesses,” she said. “In D.C., I would have drowned with a thousand bakeries there.”

She rented commercial kitchen space for a while, but the kitchen was available only in the early morning hours, which didn’t mesh with her bartending job.

She’s now licensed to run her business from her home kitchen, where she also makes chocolates. She views her kitchen as a laboratory where she can experiment with flavor combinations, especially pairing Vermont-made libations with high-quality baking.

For instance, she pairs a tart gose beer from Lost Nation Brewery with a lemon curd filling. Or she’ll toast cardamom and pair it with Caledonia Spirits Barr Hill Gin in another recipe. A minty Italian digestif called Fernet pairs well with chocolate, creating an adult take on a chocolate mint cookie.

“I use a lot of booze in my cooking,” Schalski said.

Salted caramel bourbon macarons are her best-selling product by far.

Producing a batch of cookies can take two to three days. She makes the filling first because, once the delicate shells are baked, they must be filled immediately or they can crack.

It’s important that the macarons look as good as they taste, she said.

“My boyfriend eats all of the misfit cookies,’ Schalski said.

She eschews store-bought sprinkles for ones she makes herself from Tom Cat Gin and other liquors, laying out each strand by hand. One hundred strands make enough sprinkles to fill a shot glass.

“It’s one of the most tedious things I do,” Schalski said. “Everything I do I do I want to do by hand, even if it means laying out 50 sprinkles.”

She plans to sell her macarons at local food retailers and farmers’ markets eventually, but for now she takes custom orders through her Stiff Peaks Facebook page: facebook.com/stiffpeaksmacarons. They retail for $10 to $15 per half-dozen.

“It’s still a one-woman operation,” Schalski said. “I’m looking forward to getting a bigger kitchen, but I like keeping it small and fun, combining my favorite worlds of baking and booze.”

I bake what I want to eat — and drink ... naturally I gravitate toward great bourbon and even better sweets, so combining the two together just seemed like the obvious path to take.”