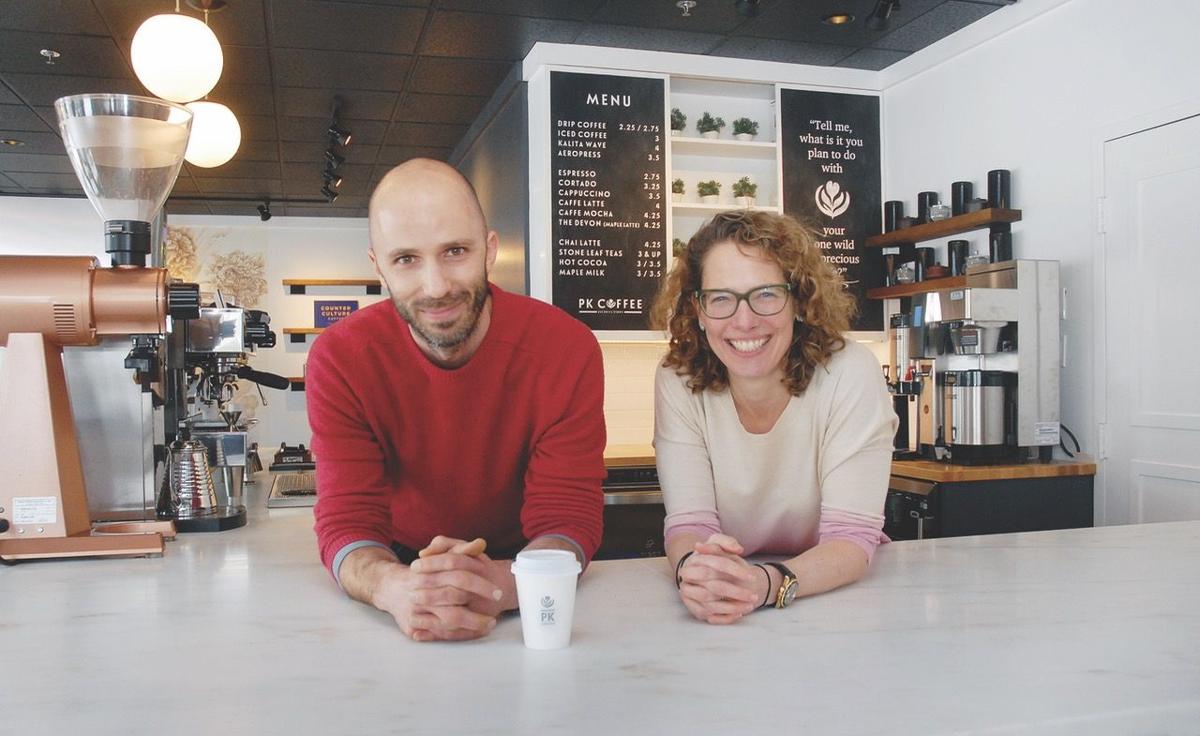 Matt Carrell and Katrina Veerman, owners of PK Coffee, are opening a café along Mountain Road. 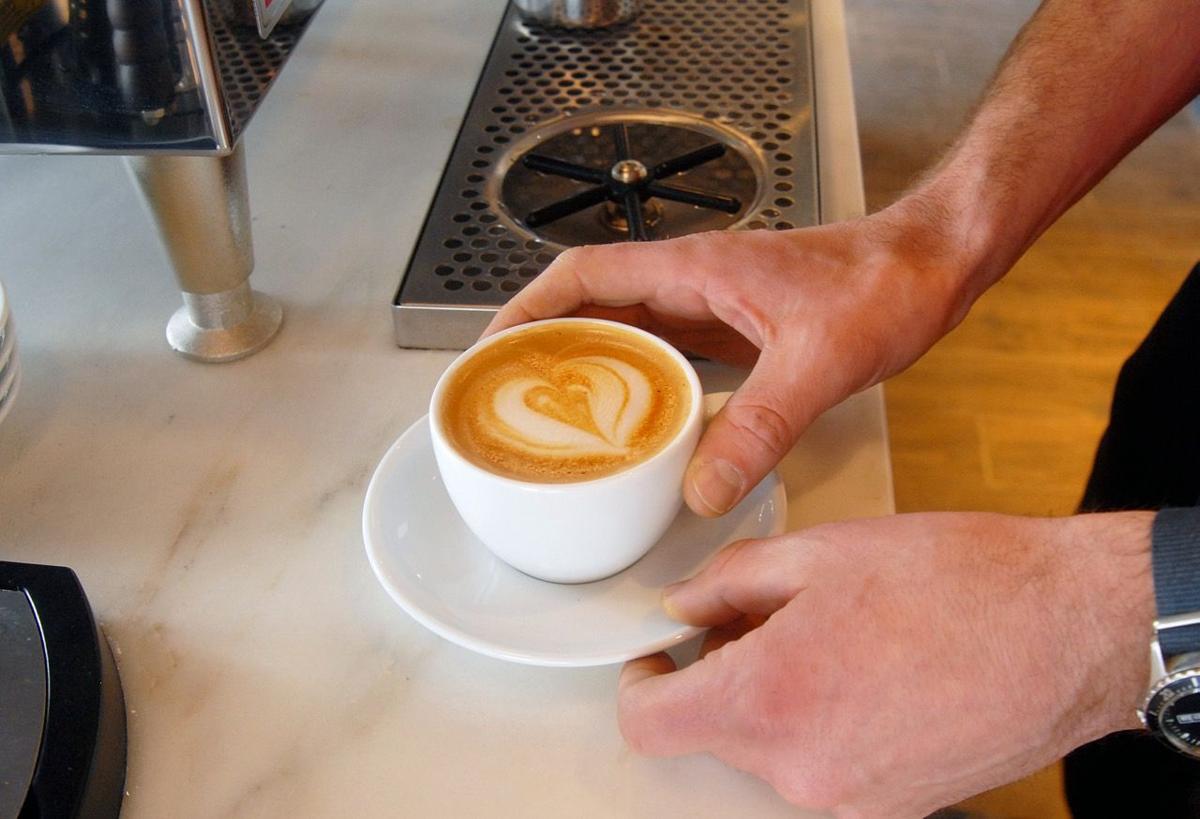 PK Coffee puts a little heart into a latte.

Matt Carrell and Katrina Veerman, owners of PK Coffee, are opening a café along Mountain Road.

PK Coffee puts a little heart into a latte.

PK Coffee is trading in its ephemeral beginnings for an actual café, giving the pocket of activity known as Mountain Road Village a place for folks to congregate, converse and caffeinate.

Katrina Veerman and Matt Carrell, busy the past year running PK Coffee as a pop-up service at Commodities Market and other places, open the doors on their new permanent place this weekend.

The café is located at the Gale Farm Center at 1880 Mountain Road.

Veerman and Carrell speak about coffee from a number of angles — the technical aspects of roasting the beans and foaming the milk just right; the academic talk about coffee history and the current events of fair trade; the culinary talk about flavors and olfactory notes.

And they want to pass on what they learn, cup by cup, to the community.

“The cool thing about coffee is the more you know, the less you know,” Veerman said.

Veerman and Carrell want people to be reminded that despite the cozy, hip, erudite vibe a café gives off, customers are still partaking of an agricultural product.

True, the fragrant, bitter beans aren’t exactly native to Vermont. But neither are kitchen staples such as olive oil, balsamic vinegar, lemons or salt, and you’d be hard-pressed to find even the most local-centric restaurant without at least a couple of those ingredients.

Coffee is a seasonal product. You can pick the beans only during certain times of the year, and there’s a shelf life from the time the beans are roasted to the time they should be used.

PK Coffee uses beans from Counter Culture, a Durham, N.C.-based coffee company that takes its product very seriously. Counter Culture offers regional training centers for coffee shop owners and baristas up and down the East Coast — the closest is in Somerville, Mass. — where they can get lessons on tasting coffee and pouring the perfect cup.

“We want to keep learning so we can keep teaching,” Veerman said.

PK Coffee will also sell tea and a variety of baked goods. The shop is working with Jess Wright from Hender’s Bake Shop (soon to be opening in Waterbury) and Marion Peer at Vermont Sweet Tooth, highly regarded in area wedding circles.

And a local food producer can represent certain things that Vermont does really well. For instance, all the milk used at PK Coffee comes from Sweet Rowan Farmstead in West Glover.

“Everywhere we can, we use local,” Veerman said. “We know it’s going to be a little bit more work, but it’s worth it.”

Veerman was living in San Francisco when the “third wave” of coffeemakers hit the country — think Folgers giving way to Starbucks, which paved the way for small craft coffeemakers, much the way Budweiser begat Sam Adams, which led to the Heady Toppers of the world — but she’s been a coffee aficionado much of her life. She says she’s been a connoisseur since the ripe age of 3.

PK is named for her great-uncle, Pierre Ketellapper, a serial entrepreneur who owned a coffee-importing company in Belgium before and after World War II. Caffeine runs through her genes.

Carrell, on the other hand, didn’t really drink coffee until the early 2000s. He calls himself a “recovering teacher” who last instructed at Champlain Valley Union High School, and spent a year teaching in Belize. There, at a coffee farm called Gallon Jug Plantation, Carrell got his first real taste of coffee.

That helped shape his idea of coffee as agricultural product, just as wine and beer are being seen as part of the food cycle. And coffee shares a lot of parallels with wine: Beans can be full-bodied or mild; the brew can have clarity or cloudiness. The terroir, where the bean comes from originally, is everything to a serious coffee drinker.

“We’re here to say, ‘This is how we like to make coffee.’ But also, ‘How do you like to drink coffee?’ That’s where the conversation starts,” Veerman said. “We want to be able to bring everybody from the community in.”

PK Coffee is in Stowe’s Mountain Road Village district, a fast-growing pocket of development with restaurants, bars and breweries, retail shops and lodging, with the Stowe Recreation Path running through it all.

In a burgeoning neighborhood, all that was missing was a café.

PK’s interior is simple and well-lit, the walls and stone countertop shades of white set off by a black ceiling and trim, all tied together with a dark brown wooden floor, the cream and the coffee.

Designer Tania Kratt and contractor David Silverberg did the interior work — she’s responsible for the nuances in Plate restaurant; he worked on Well Heeled — and there’s that simple and rustic theme going on at PK, too.

In the community-building field, there is the concept of the “third place,” that spot separate from the two usual places most of us occupy — home and work. According to city sociologist Ray Oldenburg, a good third place is laid back, with a mixture of regulars and newcomers, from all walks of life, engaging in conversation.

This means that, as much as Veerman and Carrell have been working to perfect the look of their café, the missing element will be the everyday regulars and appreciative tourists who will actually gives the place its flavor.

“We want to see this place exist beyond our personal relationship with it,” Carrell said.

We’re here to say, ‘This is how we like to make coffee.’ But also, ‘How do you like to drink coffee?’ That’s where the conversation starts."

The Mountain Road Village — that pocket of merchants, lodges and restaurants about a mile and a half from Stowe’s true downtown — is in line f…

You have a great opportunity as a local coffee shop to support local products. This includes the support of your local coffee roasters. There are many competent coffee roasters with well established names around the country from coast to coast such as Stumptown, Intelligentsia, Counter Culture and Verve to name a few. While this may be easy from a marketing standpoint it does nothing for the talented folks in your neck of the woods. It should feel good to introduce your customers to a true local artisan and not to ride on brand name recognition..... One truly good way to do this would be to create a guest roaster program that highlights your favorite coffees from local roasters and not to single out brand recognition due to the fear of success. Look at the local bars in Stowe that carry local products and national brands, this is the education of the public through curation of an ever changing and improving product. Coffee deserves this opportunity and Stowe is ripe for this model. You have this opportunity to create a third wave model in Stowe that focuses on the quality of the coffee that is being produced by talented farmers worldwide and is chosen and roasted by local artisans. Roasting is an important art form but the processing and quality of coffee hinges upon support of these farmers coupled with continued local support. Find the best local coffees, insist upon organic every chance you get and know where your supply comes from. This kind of passion will not only help you to serve better coffee at your cafe but to also have a sustainable model that your customers will be proud to support.