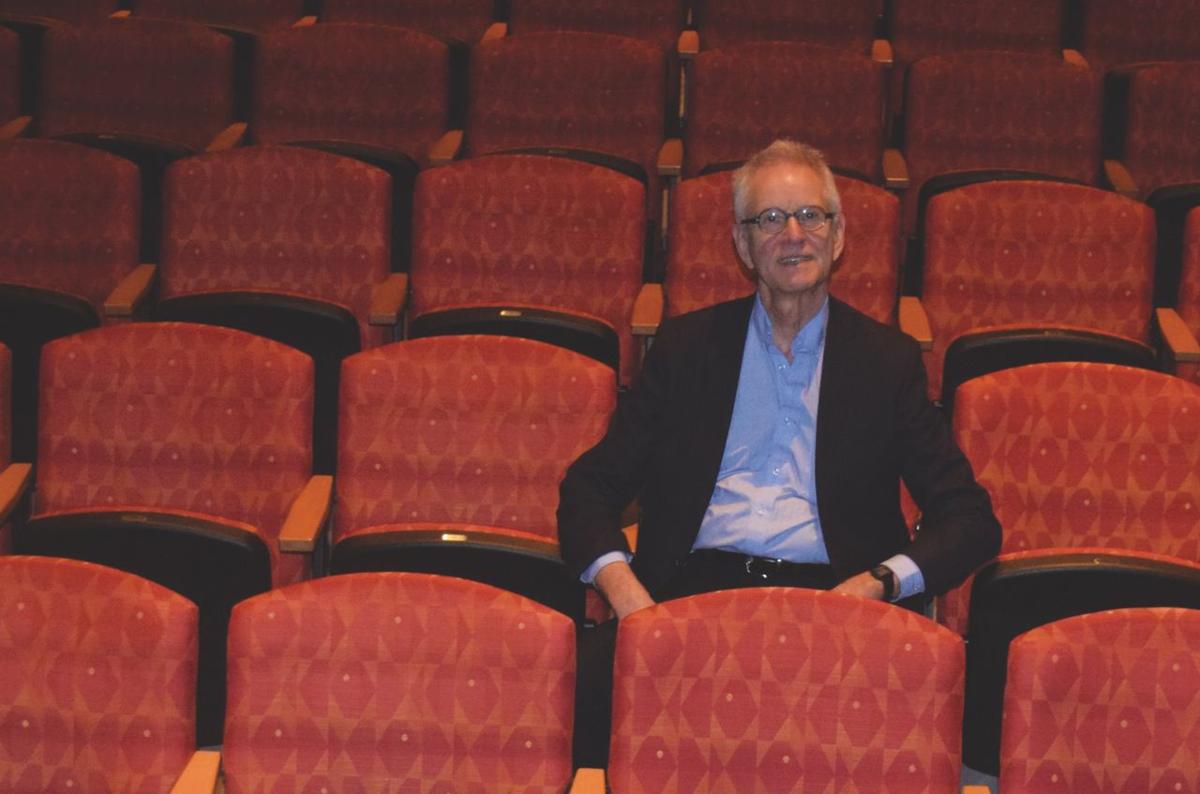 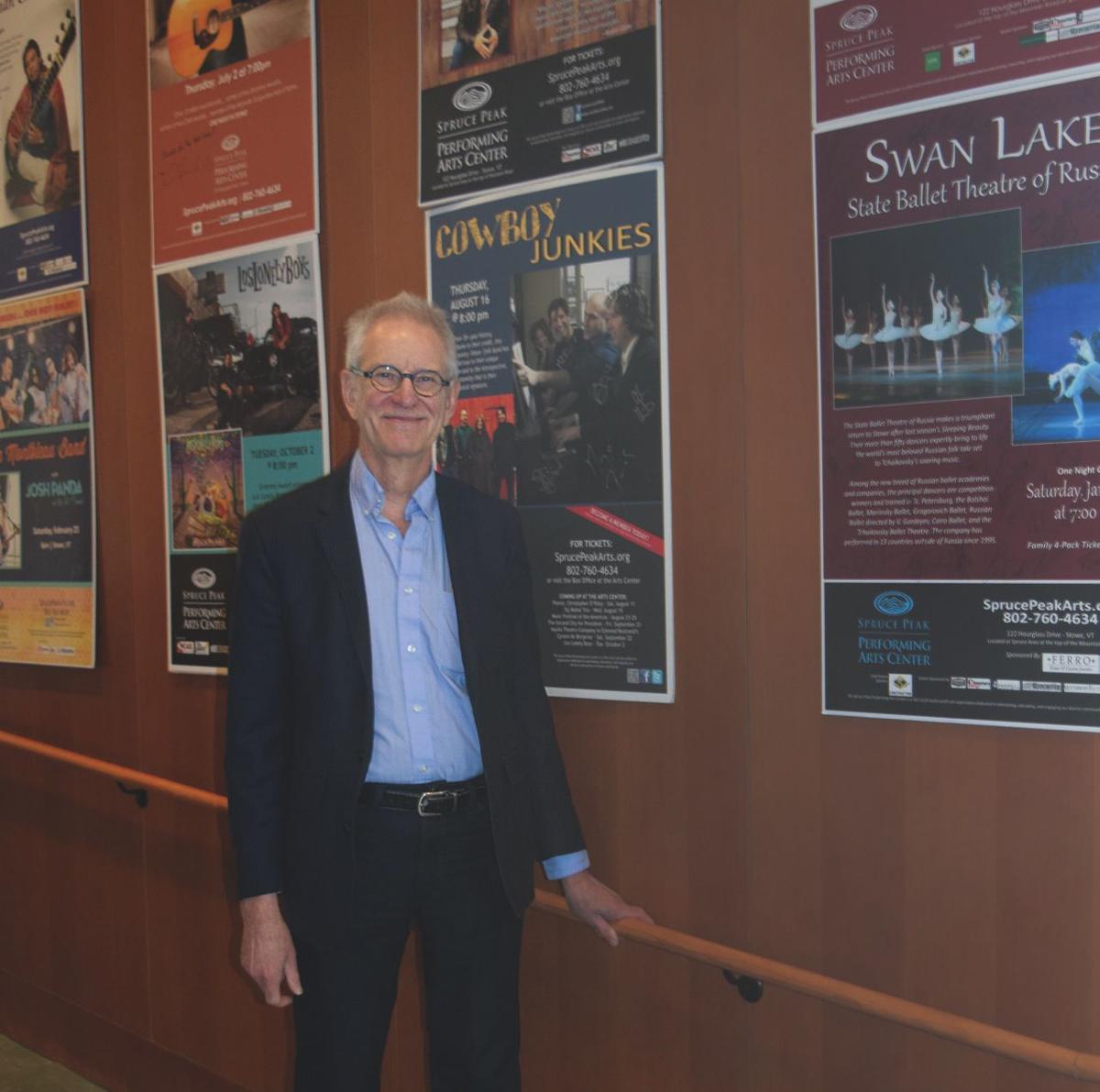 • Divas, for their rare ability to keep an audience’s attention for two hours while on stage.

• Old theaters, because often they’re home to ghosts, some of which Olson believes he’s encountered personally.

• 3D performance technology, a burgeoning field he thinks may allow audiences to step further into the world of a performance.

• And, of course, bringing local artists on stage at Spruce Peak to perform with internationally renowned musicians and comedians.

Ten minutes with Olson is enough to realize there’s not much that won’t snatch the 65-year-old’s interest, but creating a meeting space for local artists and big stage names alike has been top priority for him for the five years he’s been executive director at the performing arts center at Stowe Mountain Resort.

Olson announced his retirement this month, although he’ll still be at the performing arts center until Sept. 3.

Olson’s tenure at Spruce Peak has been the latest chapter in a storied career in theater.

“I come from a long line of historic theaters,” Olson said.

He went to the University of Minnesota for lighting design and came away with that degree and several unrelated minors. He loved the freedom of attending a big school — he could experiment with whatever he wanted to learn, but he settled on his first love: lighting design, which has fascinated him since he was a kid singing on stage in an elementary school choir.

“I liked singing with the rest of the choir, but I saw all these red lights, blue lights, green lights, all these colored lights, and I thought, ‘How do they do that?’” Olson recalled, his smile settling around his eyes behind his round, blue-framed glasses.

His career in lighting design brought him to stage management, and finally to his five-year post at Spruce Peak Performing Arts Center.

“Lighting is just organizing aluminum to make it do something interesting,” Olson said. “The fun part is working with people and trying to find ways where everybody benefits, helping people find their true and proper calling.”

A place to convene

Theater, to Olson, is “a great place to have a lot of fun,” but it’s also a necessary place for people to engage with each other and define their sense of community.

“Theaters are living entities,” Olson said. “There’s a lot of emotional resonance that happens here. In one respect, it’s a place for

convening,” usually for entertainment, but in another, “it’s a place for heightened emotional content, heightened joy, heightened anger. Some conversations can get pretty specific.”

Olson remembers when Bill McKibben, founder of 350.org, came to Spruce Peak to give a talk and wouldn’t answer questions about wind turbines.

“That conversation probably should have happened,” Olson said, and people were angry at McKibben’s reticence.

“Theater is a necessary place for a community,” Olson said. “It helps us find what we can believe in together.”

What Olson believes in is local artists. When he was 21 and working at Northrop Auditorium in Minneapolis, a manager told him, “You can’t get a world-class ballet company without putting them on a world-class stage,” and the advice stuck. Four years ago — one year into Olson’s tenure at Spruce Peak — he began a program that encouraged Vermont artists to step into the spotlight, “presenting artists from around the world and right next door.”

Olson says there are plenty of internationally renowned artists who have chosen to make their homes in Vermont, and they should be recognized, along with new talent, like Stowe jazz singer Audrey Bernstein, whom Olson first heard at Bee’s Knees in Morrisville four years ago. She would become the first Vermont artist featured in Spruce Peak’s Peak Vermont program, putting 250 people into the chairs at Spruce Peak.

“It was a creative event more than a musical event,” Olson said. “It created the seed of what grew and developed.”

Bernstein played Spruce Peak again this month, and Olson beamed as he said, “She’s a world-class artist today. I believe we contributed to that. I think that’s a terribly important thing to do for a community.

Olson’s stepping down coincides with Vail Resorts’ purchase of Stowe Mountain Resort’s ski operations, but he says his decision had nothing to do with the change of hands at the top.

AIG, which is selling Stowe’s ski operations to Vail, “has been somewhat helpful” in marketing the performing arts center, Olson said, but he believes “the opportunity Vail Resorts will present will make it more central to the community. I think it’s a fabulous idea. How it works? I don’t know.”

Olson said he announced his decision to retire before Vail Resorts bought Stowe’s operations, and “there was a time when you could have tempted me” to stay after he found out, Olson said. “I said, ‘Oh, I want to be a part of this!’ It’s the perfect time to be in Stowe.”

Olson’s feeling good about the future of the performing arts center.

“It’s a good time for the institution,” Olson said. “The board is getting stronger and doing its job creating connections with the community. It’s a perfect time to look at ways” the organization could evolve. “I’m feeling confident for a better future.”

Olson is preparing for a “good, strong search” for his successor. “We have the time to get it right,” he said. He’s hoping someone will be brought on while he’s still at work, so he can help get him or her oriented.

After Sept. 3, Olson will be spending a lot more time with his family, his wife in particular. Peentz Dubble is a yoga practitioner in Boston, and every few weeks for the last five years, Olson has driven to Boston to spend the weekend with her. Now, they’ll be able to spend more time together and with their daughter, Anya, who lives in Los Angeles and works in television.

“I’m going toward new adventures with my family, not away from anything,” Olson said.