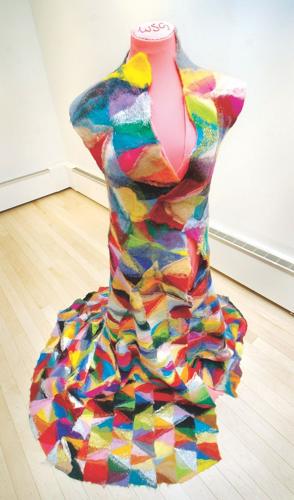 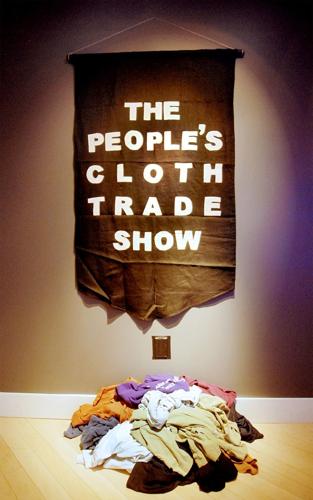 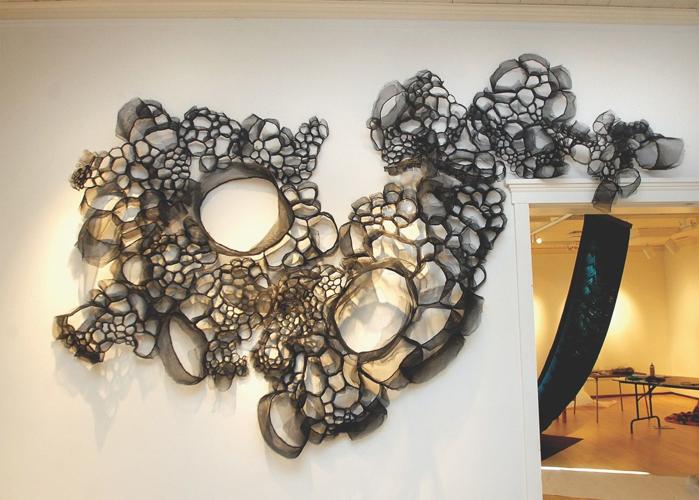 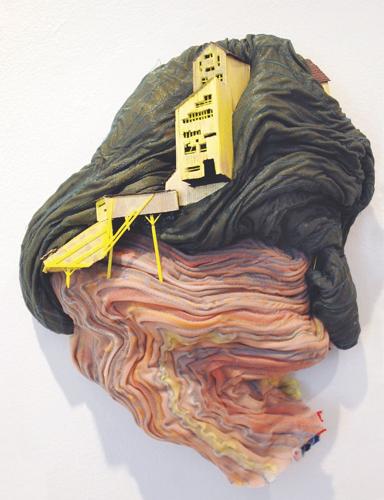 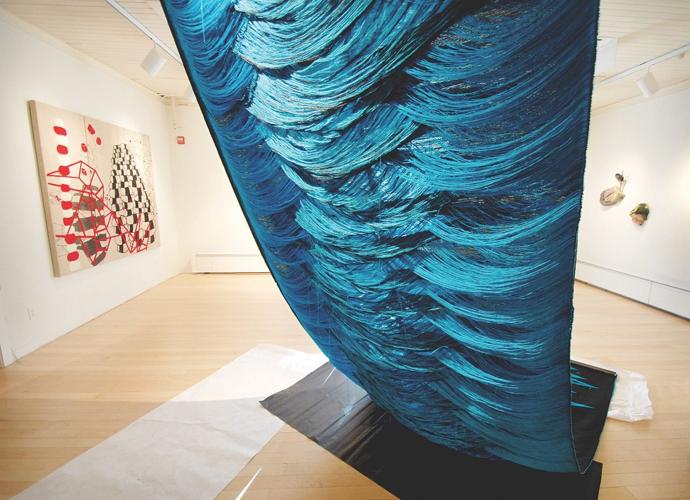 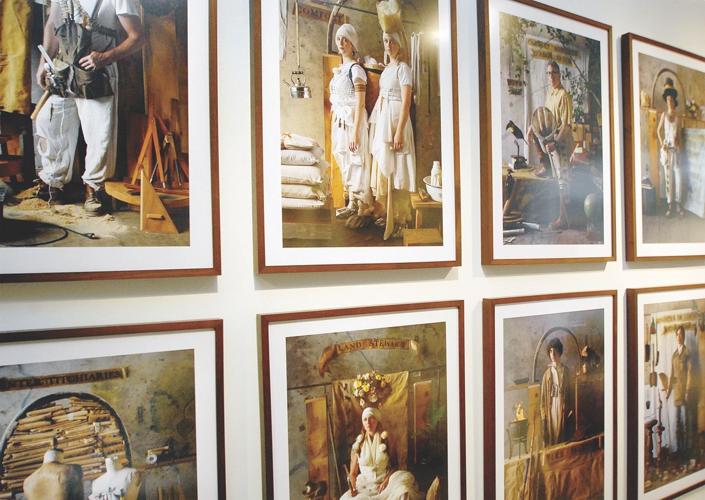 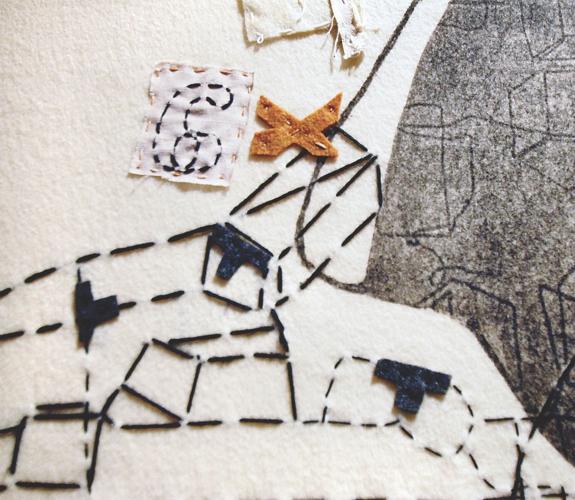 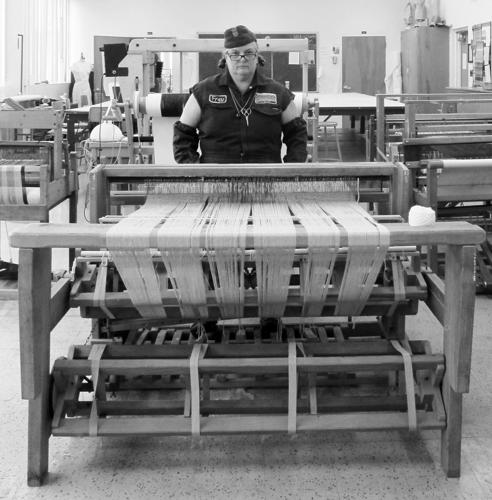 If gray winter days have you feeling dreary, head over to the Helen Day Art Center.

Its latest exhibit, “Intimacy + Materiality,” will brighten your mood instantly with its mix of bright colors, decadent textures and intricate handiwork.

“It’s nice, especially this time of year, to have really colorful artwork in the gallery,” said curator Rachel Moore.

The exhibit’s name refers to the intimate nature of the labor-intensive techniques used to create the pieces, in contrast to the mass-produced wares and materialism that many of the artists seem to be subtly questioning or, in some cases, mocking.

The 13 artists hail from throughout New England and the U.S.

A separate, independent exhibit has also opened at the Helen Day; it’s titled “Peoples Cloth Trade Show: The T-Shirt Is the Problem” and was created by Carole Frances Lung, a textile designer, performance artist and labor activist who goes by the alter-ego Frau Fiber.

The exhibit brings attention to environmental and societal ills generated by cheap, mass-produced clothing; it suggests some possible fixes and offers gallery-goers an opportunity to upcycle discarded T-shirts.

Artists in the “Intimacy + Materiality” show use traditional, centuries-old techniques in a very modern way.

Mike Andrews has draped a frame with pieces of a knit sweater, as if he didn’t have time to stitch it together. A blanket and other knitted and crocheted pieces add to the textural mix.

Jodi Colella worked with people from her community to turn black window-screen material into a wall sculpture, a mix of delicate circles and curves with a tulle-like appearance.

“It’s very organic,” Moore said. “She created it from seven separate pieces of screening so she can shape it to fit different spaces.”

Another of Colella’s works is a large, rectangular double-layer screen. Circles and other shapes are cut into the first layer, creating a multidimensional, effect.

“Her work is so refined and beautiful,” Moore said. “It’s just incredible.”

Kathleen Schneider has taken flower arranging to a new level with a large ball of fabric flowers and wire stems in a rainbow of colors that hangs from the gallery ceiling.

Many pieces are painstakingly detailed. Wylie Sophia designed a wall sculpture that resembles an ornate ball gown, using multiple fabrics adorned with a variety of lace, ribbons and detailed needlework.

“I love the textures of her work, along with the fabric she chose and all of the embroidery,” Moore said.

Also on exhibit by Sophia is a stunning gown made from hundreds of needle-felted triangles in a kaleidoscope of colors.

Screen-print artist Fraser Taylor is exhibiting large-scale black and white canvases inspired by a trip to the Scottish islands; they offer a nice contrast to the more colorful exhibits.

Collages by Sarah Amos appear to have simple designs at first glance, but step closer and you’ll get lost in the mix of printmaking, felting and embroidery techniques she employs.

J. Morgan Puett, Rebecca Purcell and Jeffrey Jenkin collaborated to produce several staged photographs with highly stylized clothing and sets that would be fitting for a layout in Vogue or Vanity Fair. The photos have both an Old World aesthetic and a sense of humor. Many feature models in elaborate costumes and dramatic poses.

In one, titled “Minister of Serial Materialism,” brooms in an assortment of shapes and sizes are displayed above a collection of dollhouse-sized chairs and sofas. It seems to ask, “How much stuff is enough?”

A more lighthearted one, “Interstitchiaries,” features bolts of fabric, sewing baskets, antique mannequins, and an apron with pockets filled with sewing notions.

Amy Honchell’s mixed-medium wall hangings are a riot of color and texture. She combines multitoned fabric with wooden and metal design elements. In one, a lighthouse shines above a sea of shimmery blue-green silk. In another, a branch with a birdhouse extends from a fabric field in shades of gold, copper and gray.

Liz Collins made some of the most dramatic pieces in the exhibit; she creates large-scale tapestries using jacquard weaving techniques.

“She does a weaving and then pulls threads out to deconstruct it and create more of a textural composition,” Moore said.

Her signature piece hangs from the gallery’s ceiling and cascades to the floor in a wave of color and texture.

Lung’s exhibit offers a simple, pointed message: Why not repurpose or reuse what you have instead of constantly restocking your closet?

On one wall is a brightly colored dress with a matching hat that Lung created from a collection of discarded T-shirts. There’s also an upcycled braided rug, handbag and woven steamer basket.

Visitors inspired by Lung’s resourcefulness can grab a donated T-shirt from a pile on the floor and set to work, turning it into a steamer basket at a nearby work table. An instructional DVD streams continuously on a nearby monitor.

Lung will host two workshops at the art center.

“Solving the T-shirt Problem” on Saturday, March 19, from 10 a.m. to 3 p.m. is designed to inspire people to upcycle, reuse and remake the T-shirt.

“Sewing Rebellion: An Economic Tactic for Change in the Apparel Industry” on Sunday, March 20, from 10 a.m. to 2 p.m. invites people to “emancipate themselves from the global garment industry” by learning to sew, mend and make their own garments and accessories. People are asked to bring pants to mend, garments to alter, and sewing problems that need solutions.

An opening reception for two new shows, “Intimacy + Materiality” and “People’s Cloth Trade Show: The T-shirt Is the Problem,” will be held Fri…