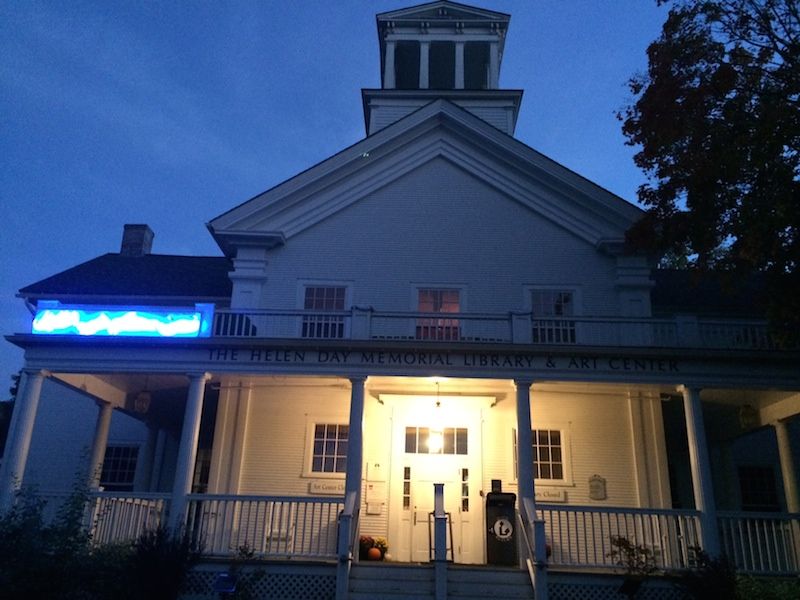 “We are with you in the night.” 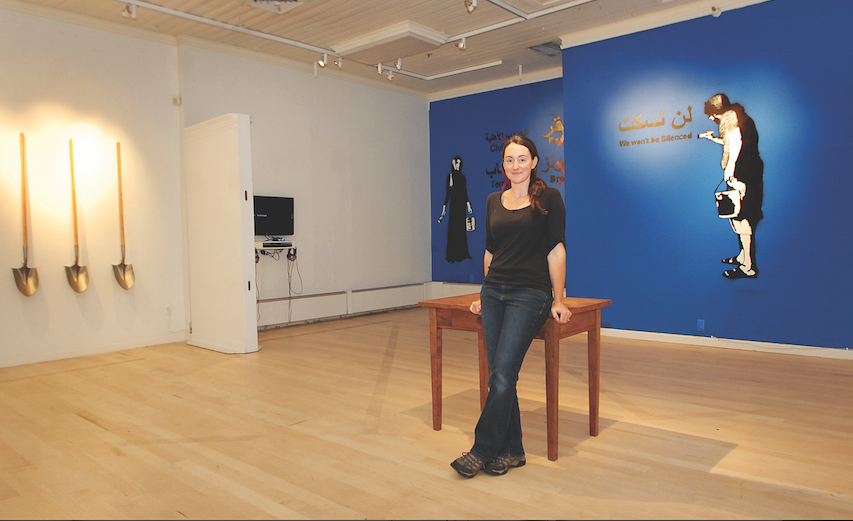 “We are with you in the night.”

During the daytime, the 10-foot-long, cool blue sign hanging on the Helen Day Art Center blends in under cloudless skies, but as night falls, the words are a piercing electric blue message in Arabic: “We are with you in the night.”

The sentiment is borrowed from graffiti found in Italian cities during the 1970s, showing solidarity with and support for political prisoners.

Whatever the language, whatever the era, though, the message resonates. And the neon sign is an apt way to draw people into the art center’s newest exhibit.

“Unrest: Art, Activism & Revolution” opened during the weekend at the Helen Day, and it’s a melange of artistic media that rewards deep exposure, and a lingering visit.

Rachel Moore, the art center’s assistant director, curated the exhibit; she says “Unrest” looks at the ways art can be used in the 21st century to spark changes in rough parts of the world.

“When you’re right in the middle of protests, to be able to create art is just amazing,” Moore said last week while showing off the exhibit.

She was inspired to put it together after watching the 2011 Arab Spring uprisings in Tunisia, Egypt, Libya, Syria, Yemen, and all through the Arab world. So it’s fitting that “We Are With You in the Night,” by French artist collective Claire Fontaine, has a prominent role in this collection of work by artists who at some point could have used the solace found in the neon sign. (Claire Fontaine is a group of artists who present their work under the name of a fictional artist.)

“They are all trying to pursue their own goals, but taken all together, you get an overarching theme,” Moore said.

So it is with Lara Baladi, an Egyptian-Lebanese artist who was on the ground in Cairo’s Tahrir Square during Egypt’s uprising. Baladi took note of the images and videos of the protests in the square that were being uploaded to the Internet, more and more as the political tension increased. She began to archive them, and expanded her archive to include similar events around the world, and broadcast them to the world in real time. The piece “Alone, Together ... In Media Res” is the result of that collecting.

So it is with the people of Culiacan, in western Mexico, as they give up their guns to artist Pedro Reyes, who turns them into shovels. In return for the guns, Reyes gave them coupons for domestic appliances or electronics. He collected more than 1,500 weapons, almost half of them high-powered military-use guns. The piece “Palas por Pistolas” features five gleaming new shovels, hung minimalist-style on a white wall in the gallery, the documentary on repeat nearby.

Proving the power of graffiti art — and not the peurile kind that a Stowe scofflaw recently peppered portions of the area with — is artist Murad Subay, emerging as Yemen’s very own Banksy. The display “12 Hours” takes up one whole wall of the “Unrest” exhibit, an image that turns graffiti on its head by literally stamping out sentiments such as child poverty, drones, sectarianism, kidnapping, poverty.

“Unrest” may have been inspired by the protests in the Middle East, but there’s plenty of room in America for art of the revolution. And prankster-activists The Yes Men’s collaboration with artist Steve Lambert is one worth spending some time with while in the Helen Day gallery. Titled “New York Times Special Edition,” it’s exactly what it sounds like, a copy of the venerable Gray Lady.

Except it’s not. Look closer at the November 2008 paper, printed right after Barack Obama was elected president. The headline screams “Iraq War Ends,” and the front page is dotted with other future utopian articles that are, as it cleverly says “All the News We Hope to Print.” The Yes Men and Lambert circulated 80,000 of these around New York City, their answer to what ought to be making news.

Many of the artists in “Unrest” are famous enough to have been featured in places such as the Museum of Modern Art in New York City. Now, though, they live side by side in Stowe for the next two months. Moore thinks they work well together, which is kind of the point of what these artists are doing for their own causes.

Said Moore, “The artists I picked may be located in one place or another, but this is more holistic, like they’re trying to figure it out for everyone.”