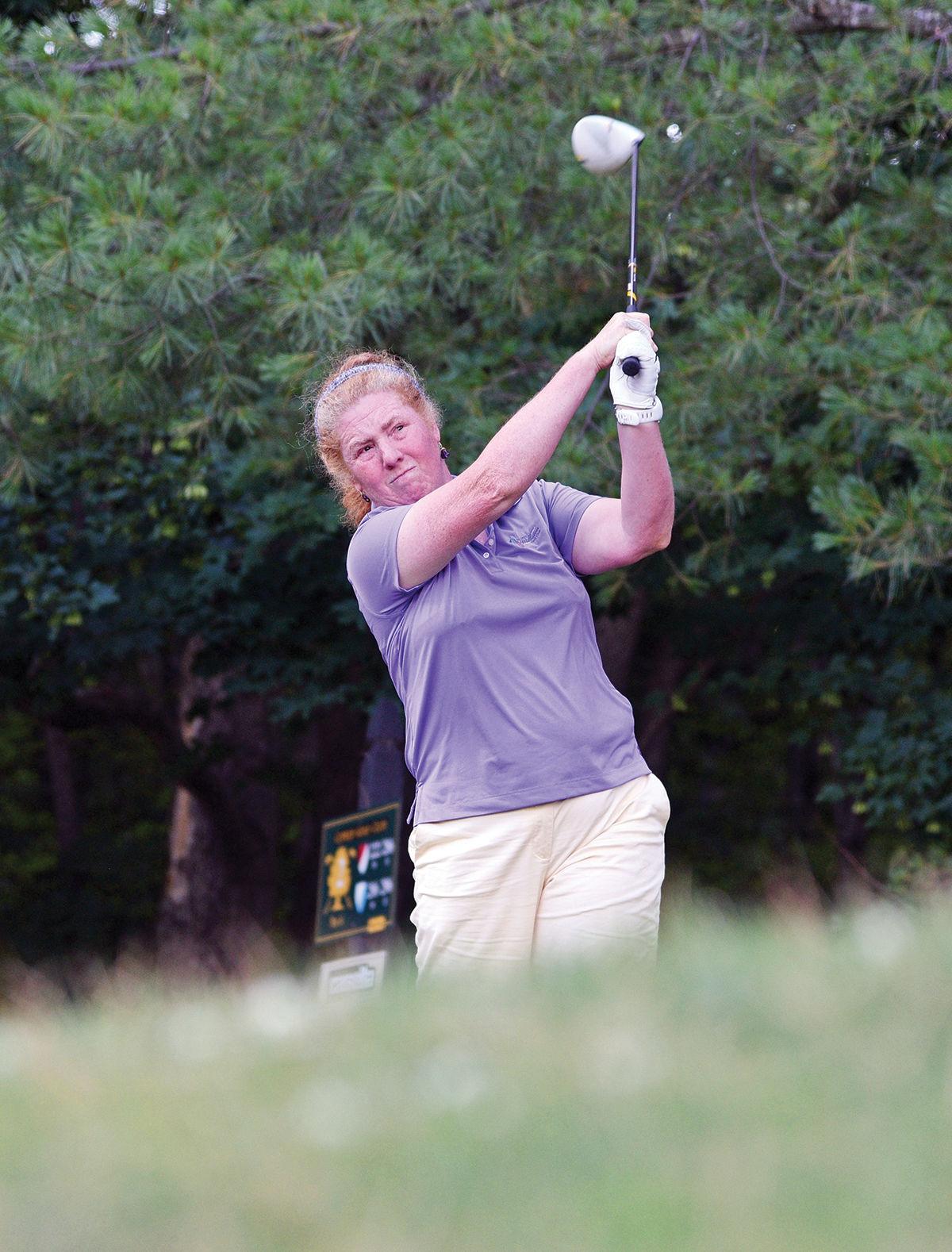 Holly Reynolds drives a tee shot on the fourth hole at Copley Country Club, where she plays nine holes every Sunday and fits in as many other rounds as possible to train. 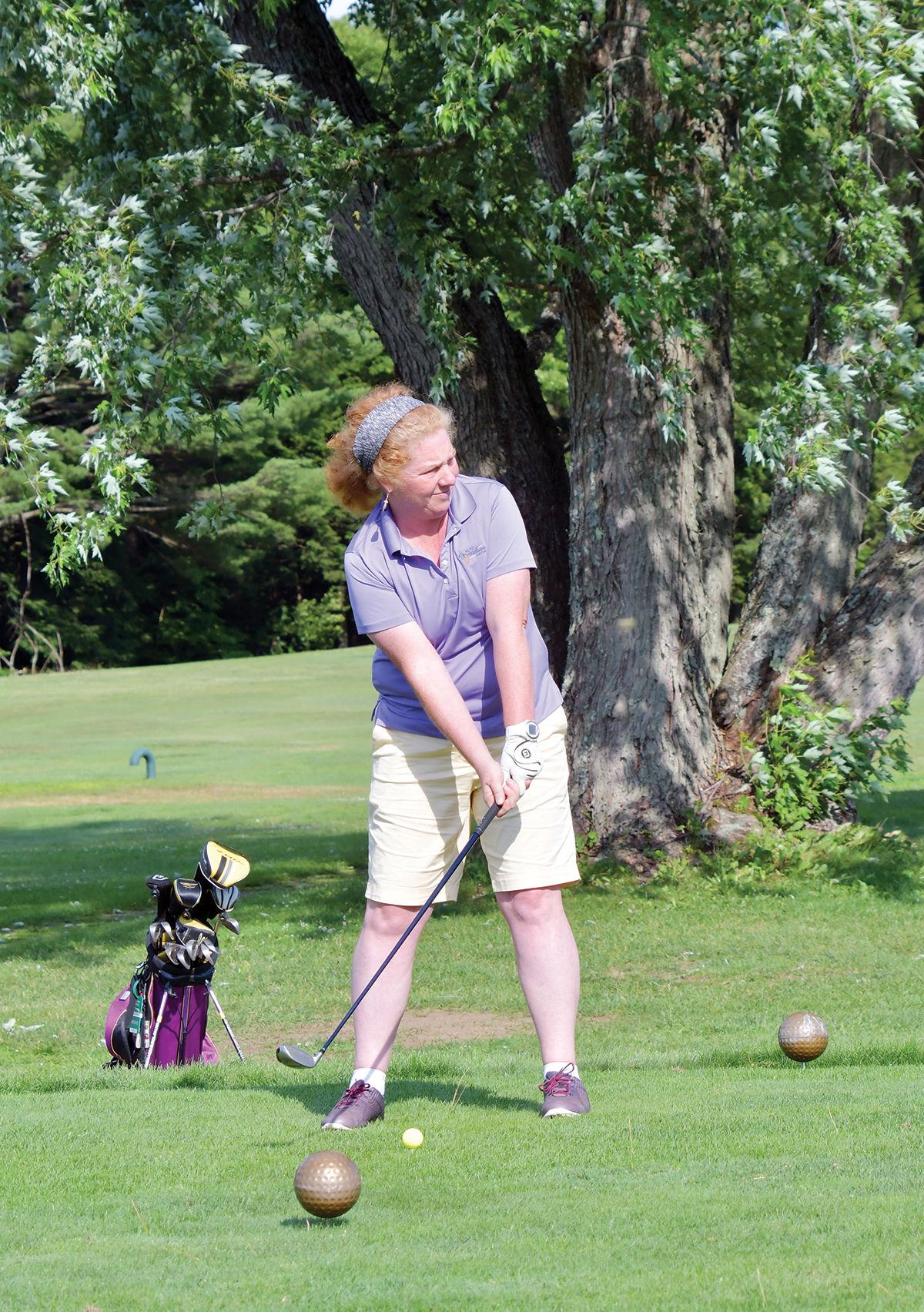 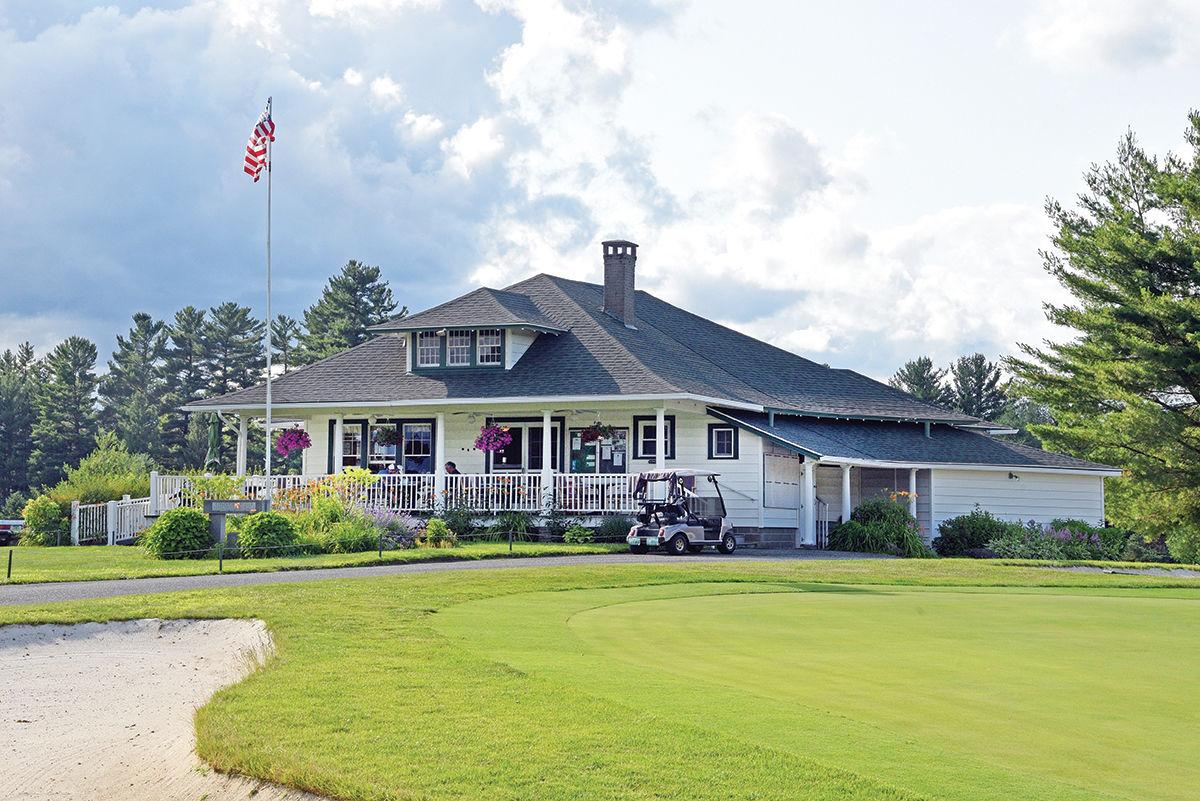 The clubhouse at Copley makes for a good spot to unwind after nine or 18 holes. 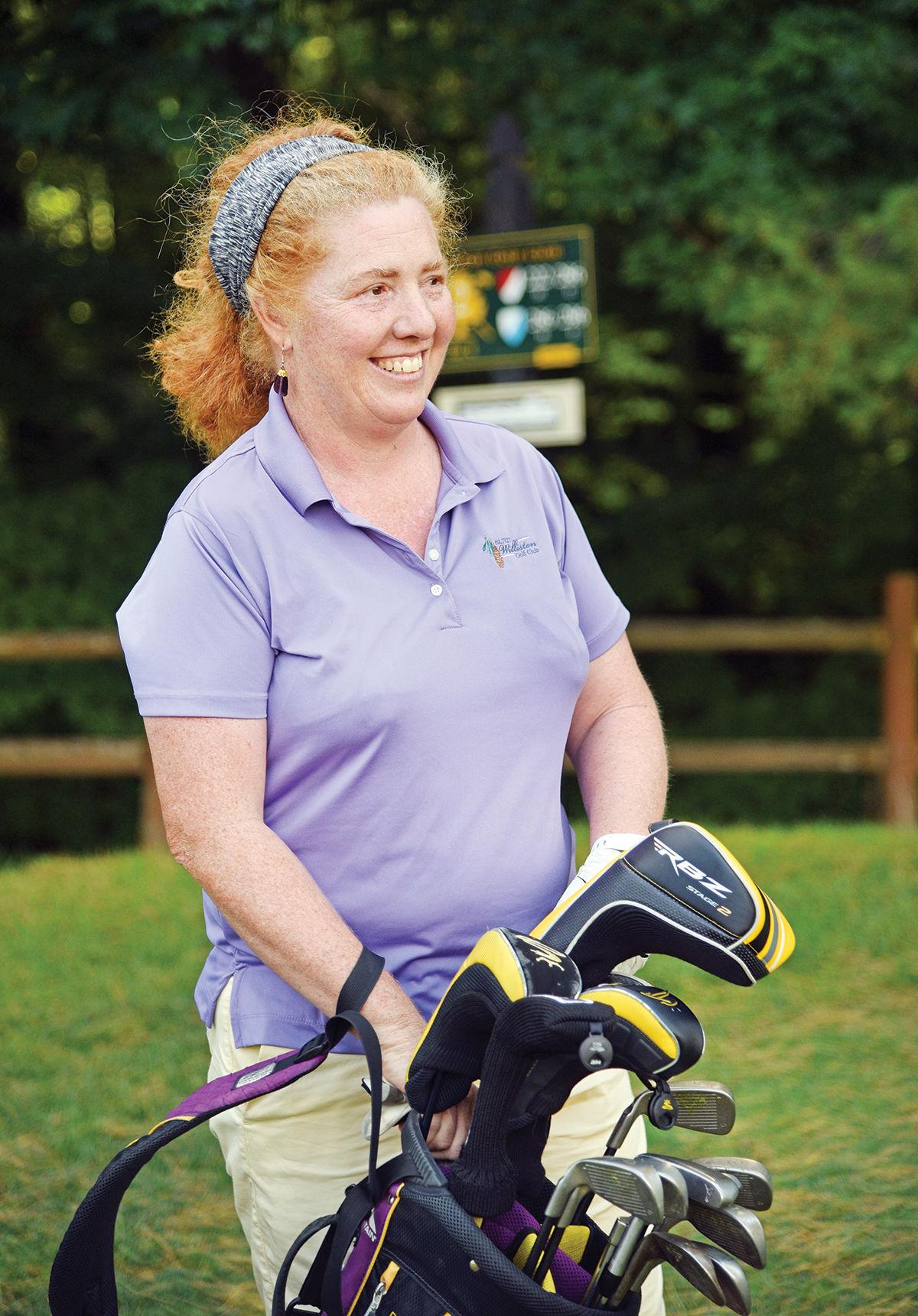 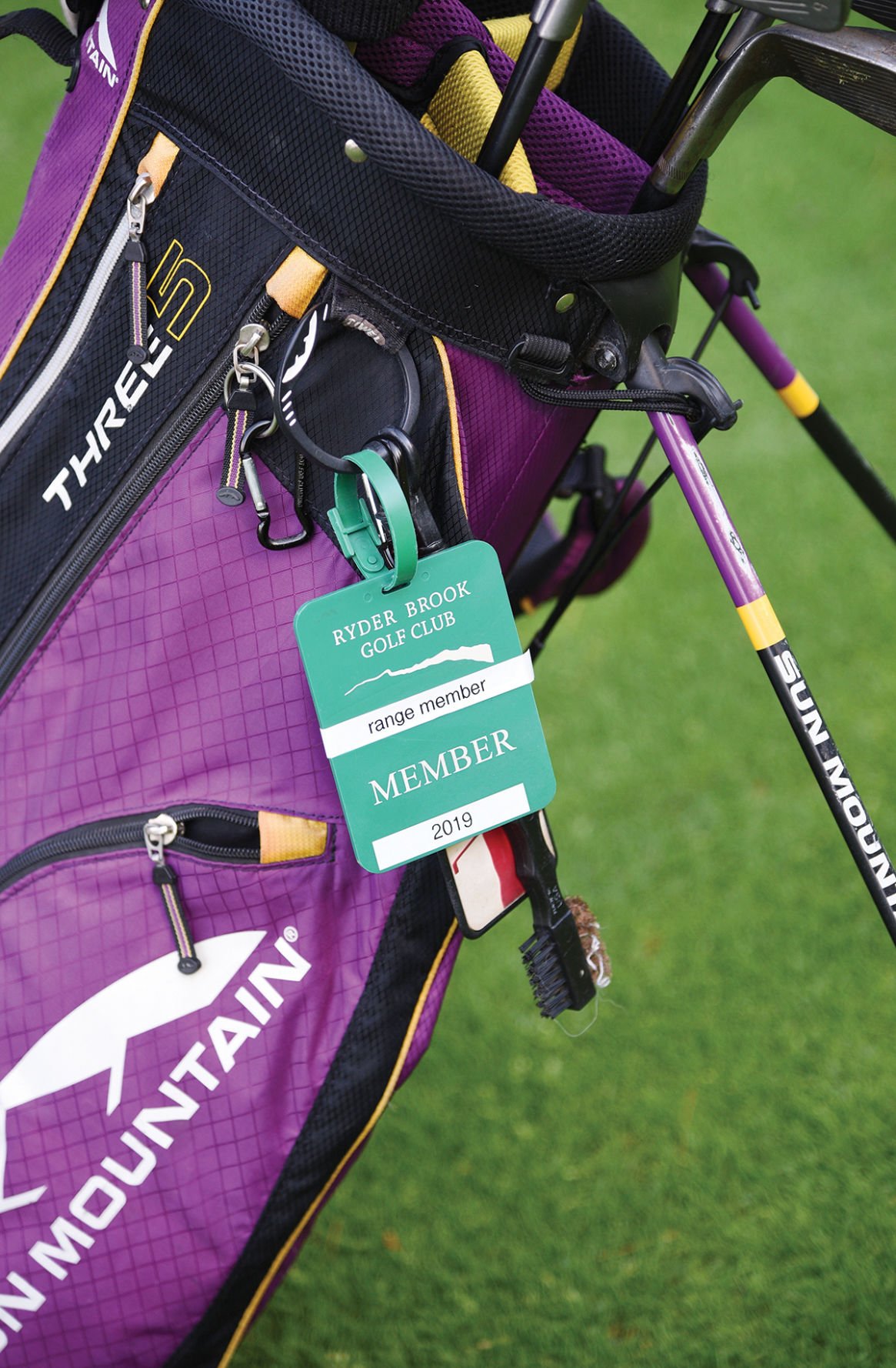 Holly Reynolds’ golf bag sports the proof of the newest edition to her training routine — a membership at the Ryder Brook Golf Club driving range. 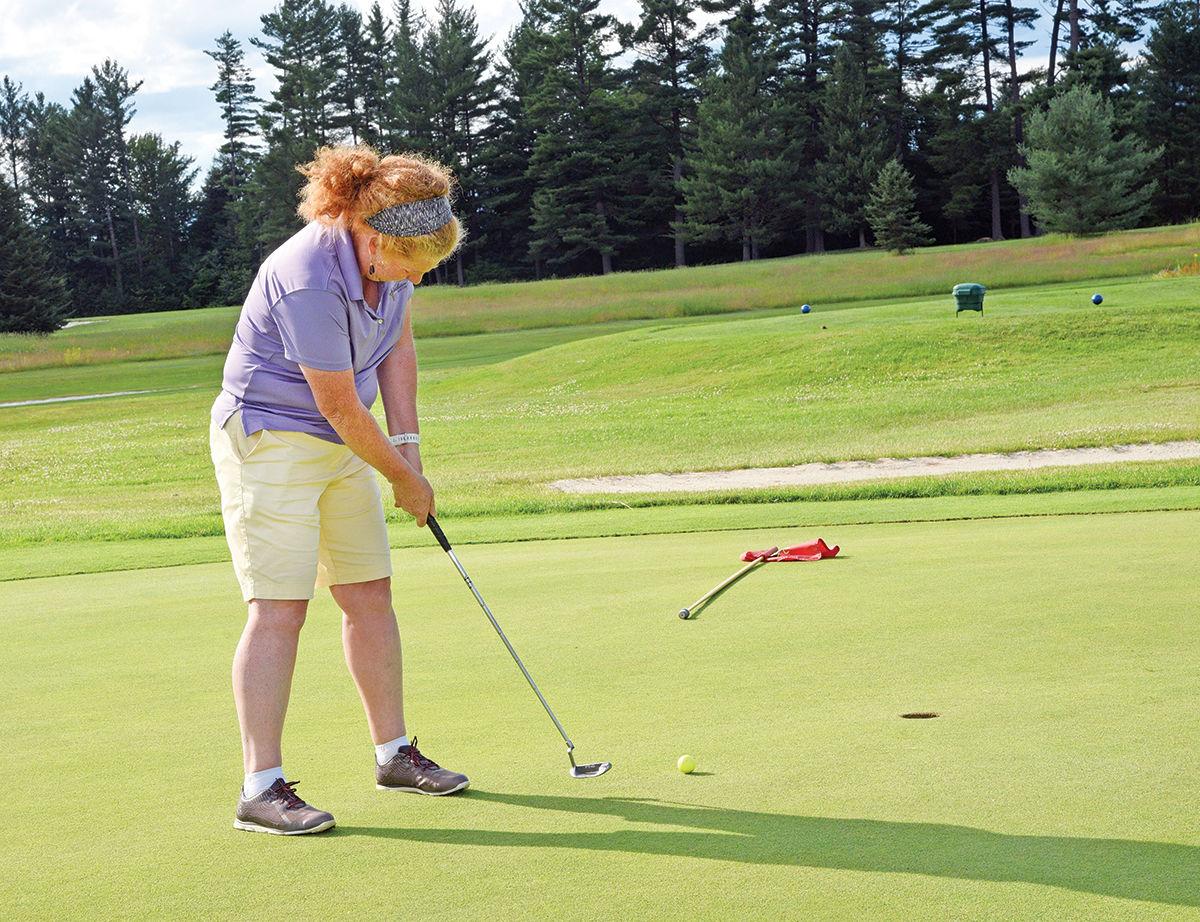 Holly Reynolds sinks her putt on Hole 4 at Copley for birdie.

Holly Reynolds drives a tee shot on the fourth hole at Copley Country Club, where she plays nine holes every Sunday and fits in as many other rounds as possible to train.

The clubhouse at Copley makes for a good spot to unwind after nine or 18 holes.

Holly Reynolds’ golf bag sports the proof of the newest edition to her training routine — a membership at the Ryder Brook Golf Club driving range.

Holly Reynolds sinks her putt on Hole 4 at Copley for birdie.

That sparkling record earned Reynolds induction into the Vermont Sports Hall of Fame earlier this year.

Reynolds, 47, has won the Vermont State Women’s Golf Association State Amateur Championship a record nine times. She’s already one of the top athletes in Vermont history, but she hasn’t finished competing by any means.

Winning has been in her blood since she starting playing golf at age 5.

That’s when she went to a golf clinic at the Stowe Country Club, and a tournament followed. It ended with Reynolds’ name atop the leaderboard — a portent of things to come. And she didn’t just beat a bunch of little kids; years later, her parents, Red and Fluff Reynolds, told she’d actually beaten a college player that day.

“She was a little put out, I guess,” Reynolds laughed.

“I’m very grateful my father put a golf club in my hand and skis on my feet at 5 years old,” Reynolds said. “I still do both.”

Reynolds grew up in Morristown, and her hometown course, Copley Country Club, has been her base ever since — even when she was traveling all over the country, playing for the University of Kansas and competing on the Ladies Professional Golf Association Futures Tour for half a dozen years after graduation.

Reynolds really got into competitive golf when she got to Peoples Academy and joined the varsity golf team. She was the only girl on the team, but was the best player and typically played at the No. 1 spot. She didn’t know it at the time, but some boys objected to playing against a girl. Her dad, Red, coached the Peoples team for three years, and if a boy objected to playing against her, Red would tell the opposing coach, who typically assigned the objector to Reynolds’ group.

Reynolds won the individual state championship for all four years of high school, beating all the boys.

In 1990, Reynolds headed to the University of Kansas. The Jayhawks had a very competitive women’s golf team, and Reynolds won one collegiate tournament in her first two years on the team. She won six more as a junior and senior, including five wins in a row.

“I was scared I wouldn’t be good enough to play collegiate golf,” she said. So, she was up every morning, out on the course, working on her game from 100 yards in.

Along with her seven college tournament victories, Reynolds won a qualifier for the U.S. Open three weeks after her high-school graduation.

After graduating from Kansas, Reynolds spent six years on the LPGA’s Futures Tour, playing in tournaments all over the country. She helped get the tour to hold a tournament at the newly opened Green Mountain National Golf Course in Killington, and she finished second.

Today, that course is probably her favorite to play in Vermont.

After six years on the tour, Reynolds came home and worked as a coach at the Stowe Golf School and at courses in West Bolton, Milton and Greensboro. She also coached at Lamoille Union High School, helping another female golfer, Lydia Beach, win a state individual title in 2010.

By that time, Reynolds had regained her status as an amateur golfer — it was revoked when she went pro, and there was a waiting period to get it back after she left the pro game.

Reynolds got her amateur status back in 2009, and began racking up more state amateur wins.

Reynolds has won four state amateur titles since 2009, but her first five came when she was still a student.

The 2016 win stands out for Reynolds. Not only did she win, but the win came at Green Mountain National.

“I wasn’t playing that well” on the tournament’s final day, Reynolds recalls, shooting a 40 on the front nine. But “something came over me on the back nine,” and she shot a 32 and took home the trophy.

The drive for more

Twelve state amateur titles are impressive, but Reynolds wants more after an off year in 2018. She still finished in the top 10 at both championship tournaments, but “it wasn’t pretty.”

She plays every Sunday at Copley to train and fits in other rounds during the week when she can squeeze them in between league play at the country club and her six-day-a-week job for the U.S. Postal Service in Johnson. She has added more training time this year, buying a membership to the driving range at nearby Ryder Brook Country Club.

She hits three or four buckets of balls a week at Ryder Brook, and thinks that extra time working on her game is just what she needs.

“I’m so much more confident and relaxed” than she was a year ago, Reynolds said. “I just knew that I needed something more than I had last year. I didn’t realize that this was what I was missing, but I know now.

“I’m swinging well,” she said. “I’m hitting the ball better than I have in a couple of years.”

That was apparent when, with a reporter and photographer in tow, she took to Copley for a few extra holes on Sunday, July 14. Fresh off her weekly nine holes, Reynolds made short work of the extra time on the course, parring Hole 3 with a four before recording a birdie on Hole 4 with a beautiful approach shot to set up an easy putt.

“I like having you guys around,” she said with a laugh.

Reynolds is particularly happy with her approach shots lately, and they looked to be a strength that day, as after a second-straight arrow-like drive off the tee she hit a monster second shot on Hole 4 that dropped within feet of the cup. With that in mind though, she wants to concentrate a little more on her putting before she heads to Middlebury next month.

After that comes the Mid-Amateur, at the Newport Country Club, a course Reynolds played a lot in high school.

Holly Reyonlds is a Hall of Famer.