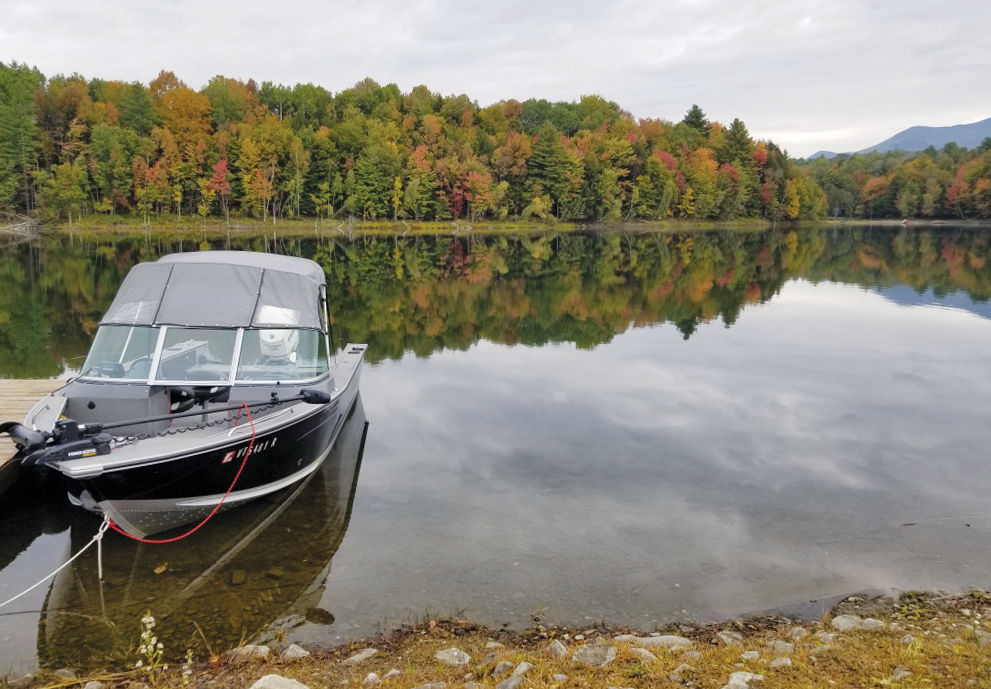 Cruising the Waterbury Reservoir is an ideal way to see Vermont’s fall foliage. 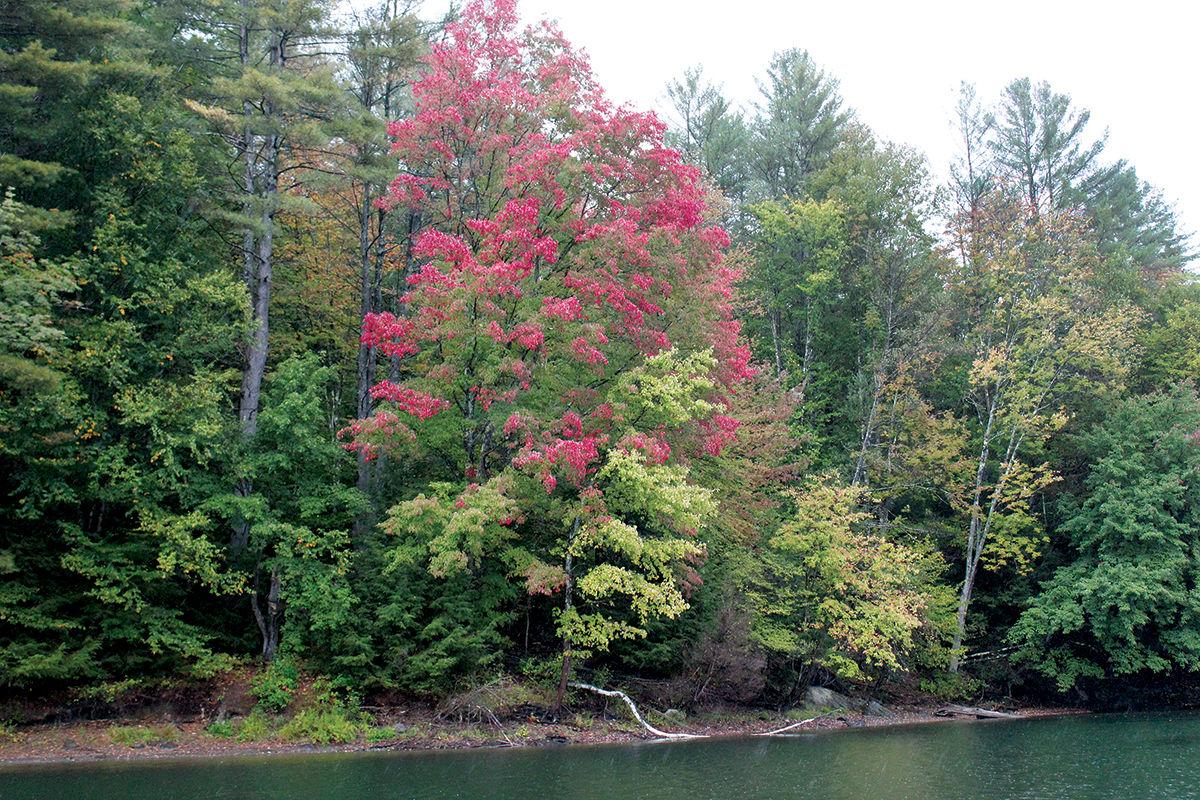 This tree showing brilliant red leaves is a stunner every year, said Bob Shannon, who offers tours of the Waterbury Reservoir by boat.

Cruising the Waterbury Reservoir is an ideal way to see Vermont’s fall foliage.

This tree showing brilliant red leaves is a stunner every year, said Bob Shannon, who offers tours of the Waterbury Reservoir by boat.

Route 100 is one of the most popular routes taken by leaf-peepers every fall.

But lots of places off the beaten path offer different, spectacular views of Vermont’s fall colors. In fact, why not get off land entirely?

The Fly Rod Shop in Stowe offers boat tours of the 850-acre Waterbury Reservoir from mid-September, when the leaves start to turn, and November, when stick season arrives.

“The best one hour you can spend in Vermont,” said Bob Shannon, owner of the Fly Rod Shop, on the way to the reservoir for a mini-tour.

Up to six leaf-peepers can go on each tour, Shannon said, taking a van to the reservoir. Typically, three tours are offered each day — at 11 a.m., which is Shannon’s favorite tour, and at 1 and 3 p.m. If he has a group ready to go, he’ll often take a fourth tour at 4 p.m.

The reservoir offers more than just a different viewpoint. It’s an attraction in itself.

Hills seem to shoulder their way up out of the water, and mountains frame them in the background. The long, finger-shaped reservoir ranges through a broad variety of trees, so the colors are very diverse, and since the shoreline is almost completely undeveloped, you’re completely immersed in the changing foliage, and you feel like you’re miles from civilization even though Route 100 is just over the hill.

“It gets people out in the foliage, up close and personal,” Shannon said. All the guides know the history of the reservoir and the region, and are always feeding tidbits to guests.

A fishing trip is another way to get out on the water to see spectacular views of Vermont’s hills and mountains alive with color.

Dog’s Head Falls on the Lamoille River in Johnson is one such tour.

“It runs through a gorge, and has spectacular colors,” said Bob Shannon, owner of the Fly Rod Shop in Stowe.

The Gihon River in Johnson, the North Branch of the Lamoille River along Route 109 in Waterville and Belvidere, and the Winooski River below Bolton Dam are other great spots to view foliage and catch trout, he said.

“The fishing this year has been phenomenal,” Shannon said. “This has probably been one of the best trout seasons of the last decade.”

Just before the mini-tour, Shannon had taken an 84-year old woman, her two daughters and their spouses out in the boat. It was overcast and raining, but the beauty of the reservoir and foliage entranced everyone.

“They said it was the highlight of their last four days,” Shannon said.

The tour typically takes visitors to nearly every corner of the reservoir, but Shannon likes to take visitors on an extra high-speed trip from the dam back down to Waterbury Center State Park if they’re agreeable and there’s time.

“That trip back offers the best views of the Worcesters,” Shannon said.

No guarantees, but people often get to see one or both of the bald eagles nesting at the reservoir. On one recent day, all three tours included an eagle sighting. Moose aren’t a common sight anymore, but deer are, and one tour this fall featured two bears.

The Fly Rod Shop has been offering the tours for over a decade now. The idea came up at a staff meeting, and Shannon had his doubts. He remembers thinking, “Who’s going to pay us for a boat ride?”

“People are looking for the best, quickest way to take in the foliage,” he said. “This works.”

Shannon gets plenty of repeat customers, lots from out of state but plenty of locals, too. And Shannon himself has become a huge fan of the reservoir foliage tours.

“I did every tour last year. I want to be out on the lake every day,” he said. It became a running joke in the shop, as employees would volunteer to lead a tour, knowing full well Shannon would big-foot them.

“If there was no tour that day, I’d use the excuse that I had to go gas up the boat,” he said. “I’ll see you in three hours.”

“Even on a day like today, I mean, look at that,” he said, gesturing at slowly changing hills rolling down toward the reservoir. “It’s awesome.”

After a decade of tours, Shannon has gotten pretty good at predicting when fall colors will peak.

“Nine days,” he said confidently on Sept. 26. He thinks that’s about five days ahead of last fall.

“We had a really good summer; I think we’re in for a really good season,” he said. There’s never a bad fall in Vermont, he said, but “this year will be exceptional.”

The Fly Rod Shop is allowed to run tours on the reservoir from Sept. 15 through Nov. 1. Last year, the last tour went out on Oct. 22, and Shannon already has tours booked through Oct. 20 this season.

For more information about the Fly Rod Shop and its foliage boat tours: flyrodshop.com or the shop’s Facebook page. To book a tour: 802-253-7346 or customer@flyrodshop.com.

What’s the autumn? A second spring when every leaf’s a flower.” — Albert Camus