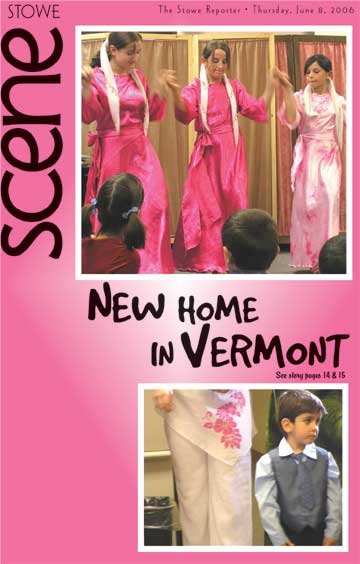 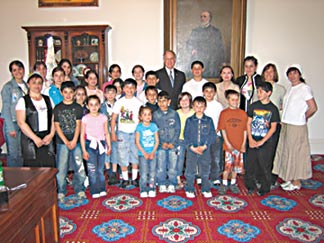 The Krasnodar region of Russia, from which many

The Krasnodar region of Russia, from which many

The Ilyasovas were a bit overwhelmed when they arrived in Waterbury Center, and for good reason.

Two days after the family took a plane from central Asia to Vermont, their five-month-old baby, Sevda, became very sick.

Dilbar Ilyasova was concerned about her child’s health, but she couldn’t do much. The problem: The Ilyasovas spoke no English. And David Goodman and Sue Minter, who were providing the Ilyasovas a place to stay, couldn’t speak Russian well enough to communicate with them.

So, they got inventive. Goodman and Minter contacted a friend, who contacted a former college roommate living in New York City who speaks fluent Russian. Over the phone, they translated the situation — Sevda had a fever — and came away with a detailed medical snapshot. Soon, the baby was doing fine.

“That was one creative way of dealing with one crisis,” Goodman said.

The Ilyasovas are among more than 100 Meskhetian Turks who, in the past year, have flown in from Central Asia and resettled in both Barre and Waterbury through the Vermont office of the Refugee Resettlement Program.

They were resettled in the United States to escape oppression from local officials in southeastern Russia, where the Turks are considered a lower class of citizen and denied all civil, political and social rights.

Some say their marriages weren’t recognized, children weren’t allowed in schools, and arbitrary beatings and arrests were regular.

The Ilyasovas say they were harassed by police and treated as a Muslim minority.

Meskhetian Turk persecution stretches back decades, according to the United Nations office for coordination of humanitarian affairs.

In 1944, about 100,000 Meskhetian Turks were deported to Soviet Central Asia from their native land — what’s now the southwest region of the nation of Georgia — under dictator Joseph Stalin’s orders. Stalin considered the Meskhetian Turks a problem because, as Turkish-speaking Muslims, they had deep social ties to Turkey. Stalin feared they’d be disloyal in a conflict with Turkey.

Before deportation in 1944, the Meskhetian Turks were mostly skilled farmers, raising cattle and crops.

Now, the Meskhetian Turk population is spread out all over central Asia — Kazakhstan, Kyrgyzstan, Uzbekistan — and across Russia, Ukraine and Azerbaijan. Many still lobby for repatriation to Georgia, and some live in the Krasnodar region of Russia.

Identity remains a big issue for this country-less group of people. U.N. officials are concerned that the Meskhetian Turks haven’t been officially “rehabilitated” by the Russian government, meaning there’s no official declaration that they’ve been wronged.

The Vermont Refugee Resettlement Program has been the state’s lead agency for finding homes and opportunities for Meskhetian Turk refugees. It’s part of the U.S. Committee for Refugees and Immigrants, and is the state’s only resettlement agency.

Bob Sanders, director of the program, said his agency has resettled about 4,500 refugees — Bosnians and Vietnamese among the largest groups — since becoming active 26 years ago. Refugees may arrive in Vermont, but they’re free to live wherever they want.

“The United States, through the State Department, designated those living in Russia as being an ethnic group, a population of special concern that needs special protection,” Sanders said. “They were essentially stateless people in Russia, with very low or nonexistent prospects for changing their status.”

About a year ago, the Turks began arriving at Burlington International Airport. Since then, more than 100 Meskhetian Turks have been resettled in Washington County. Another 30 to 40 people may be on the way, people with relatives who’ve been resettled already, Sanders said.

The Refugee Resettlement Program aims to get Meskhetian Turks on their feet so they can, in time, live free and independently in the community.

“A refugee is only refugee for only a very short time,” Sanders said. “Within a year, they’re able to apply for legal permanent residence status — a green card — and four years later they can apply for citizenship.”

Once Meskhetian Turks arrive in community, it takes a lot of volunteer work to make them welcome, Sanders said.

In general, the resettlement program supports refugees for first eight months after they arrive in the U.S. That includes cash assistance — $750 per month for a family of four, for instance — and a one-time payment per family member. The one-time cash is intended to cover refugees’ basic needs for the first couple of months; food and housing top the list.

Most refugees find a job within the first two or three months, but cash assistance extends up to eight months if they don’t find employment right away, Sanders said.

In addition, Meskhetian Turks get a Russian-speaking case manager and employment counselor, who help in the search for a place to live and work.

In some cases, host families like Sue Minter and David Goodman provide a roof over their heads and meals for the first couple of weeks.

Last year, program officials collaborated with the Waterbury school system, and got translators on hand for Meskhetian Turk children by the first day of school.

“Timing is everything,” Sanders said. “We will make every attempt to keep family members in proximity (to each other) so if we have a new family that comes, we’ll do our best to find them affordable and sustaining housing in Waterbury.”

For David Goodman, the chance to help a family of Meskhetian Turks was an enjoyable, if challenging, experience.

Zafar, the father, speaks seven languages, but not English. So, the two families had to connect and relate to each other in different ways.

“Zafar, in Russia, had been a farmer and builder and I could tell he was kind of antsy do something,” Goodman said. “One day I brought out the chain saw and his eyes popped. The two of us were cutting wood; he probably would have clear-cut from here to Stowe if I didn’t stop him.”

Another time, on his daughter’s 14th birthday, the Turkish children taught each other dances and how to play music.

After about two weeks, the Ilyasova family found their own place in town. Goodman helped deliver the washing machine, a desk and bed.

Goodman said he learned about the resettlement program a few years ago after hosting a family from Somalia.

“My grandparents were refugees from Russia in the 1920s, so I felt that I had a 100-year-old debt to pay back to host family for a new generation,” Goodman said. Through a translator, the Ilyasovas “were very surprised to hear about my ancestry, that my grandparents were Russian Jews. They were floored by that.”

“The community is richer for having them,” Goodman said. “I feel lucky that we had the chance to be part of their lives. It’s inspiring that a little community in Vermont has reached out.”