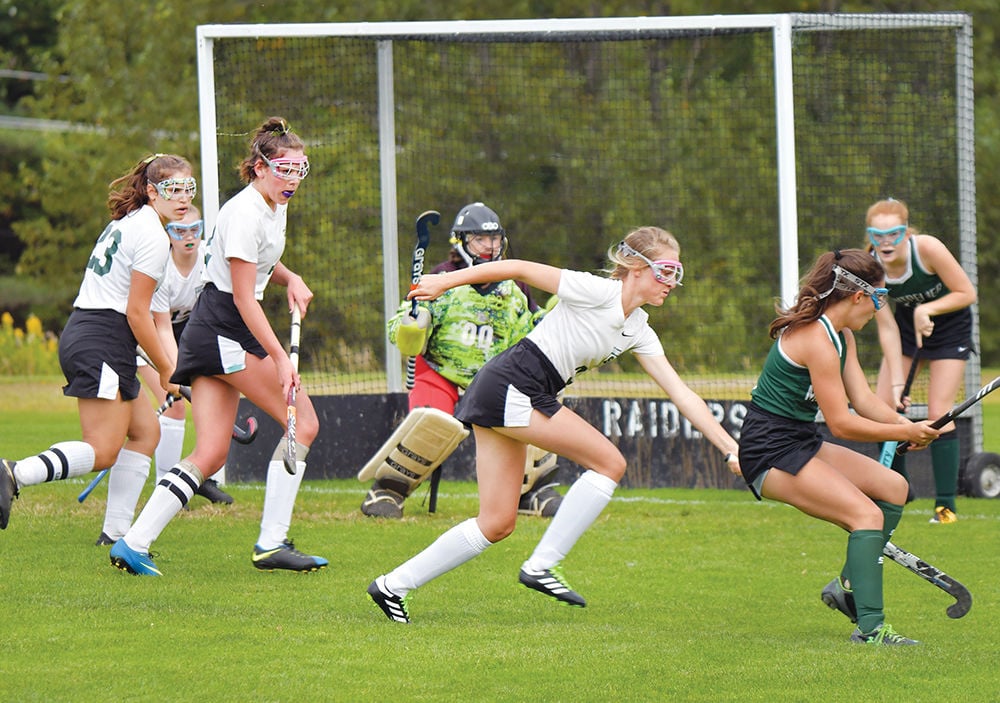 Swarming defense is a big reason the Stowe High School field hockey team — in the midst of a 7-1 victory over Montpelier — is off to a fast 3-0 start on the young season. 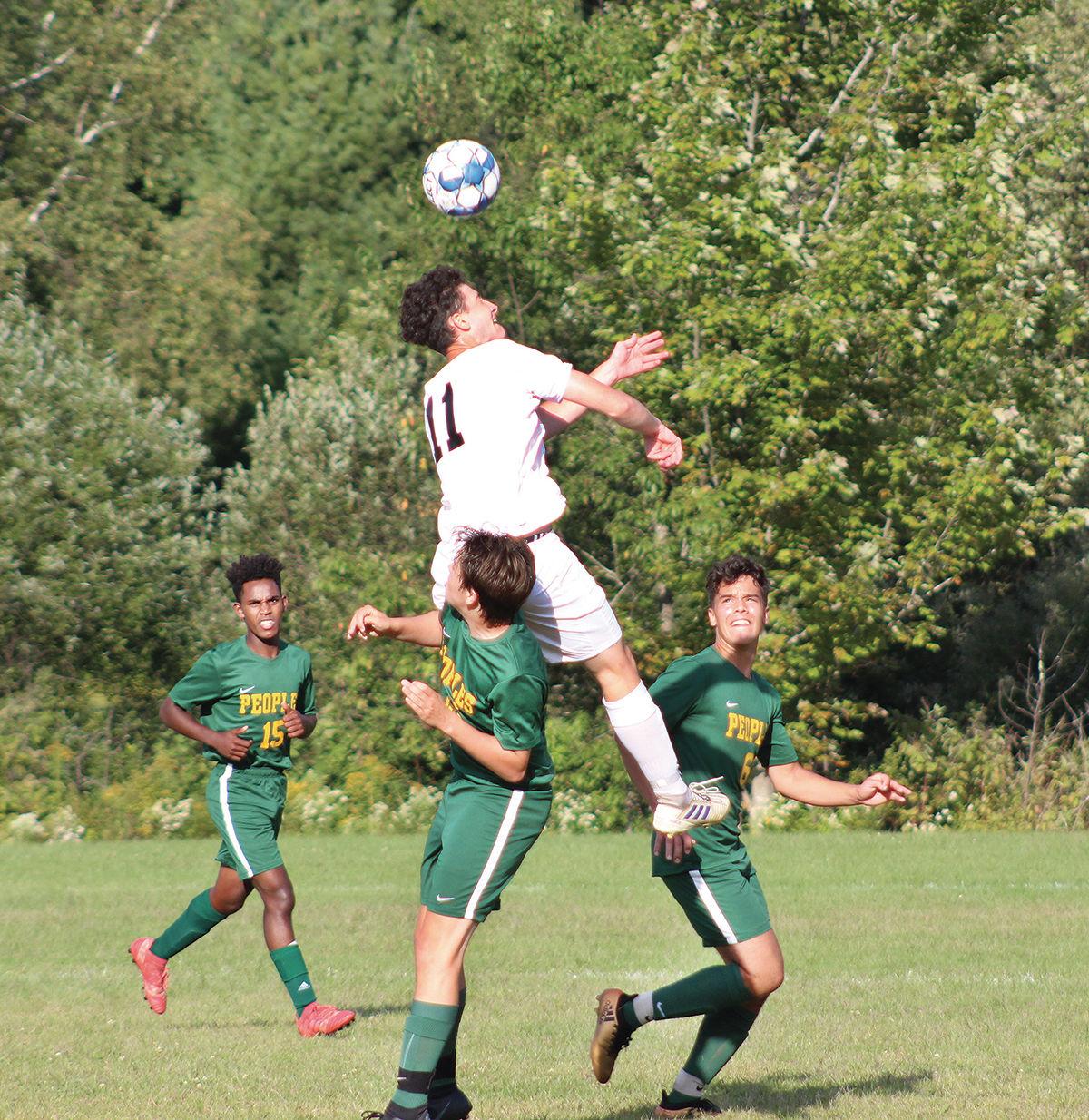 Stowe High’s Tristan Love soars to control the ball in a 3-2 victory over Peoples Academy. 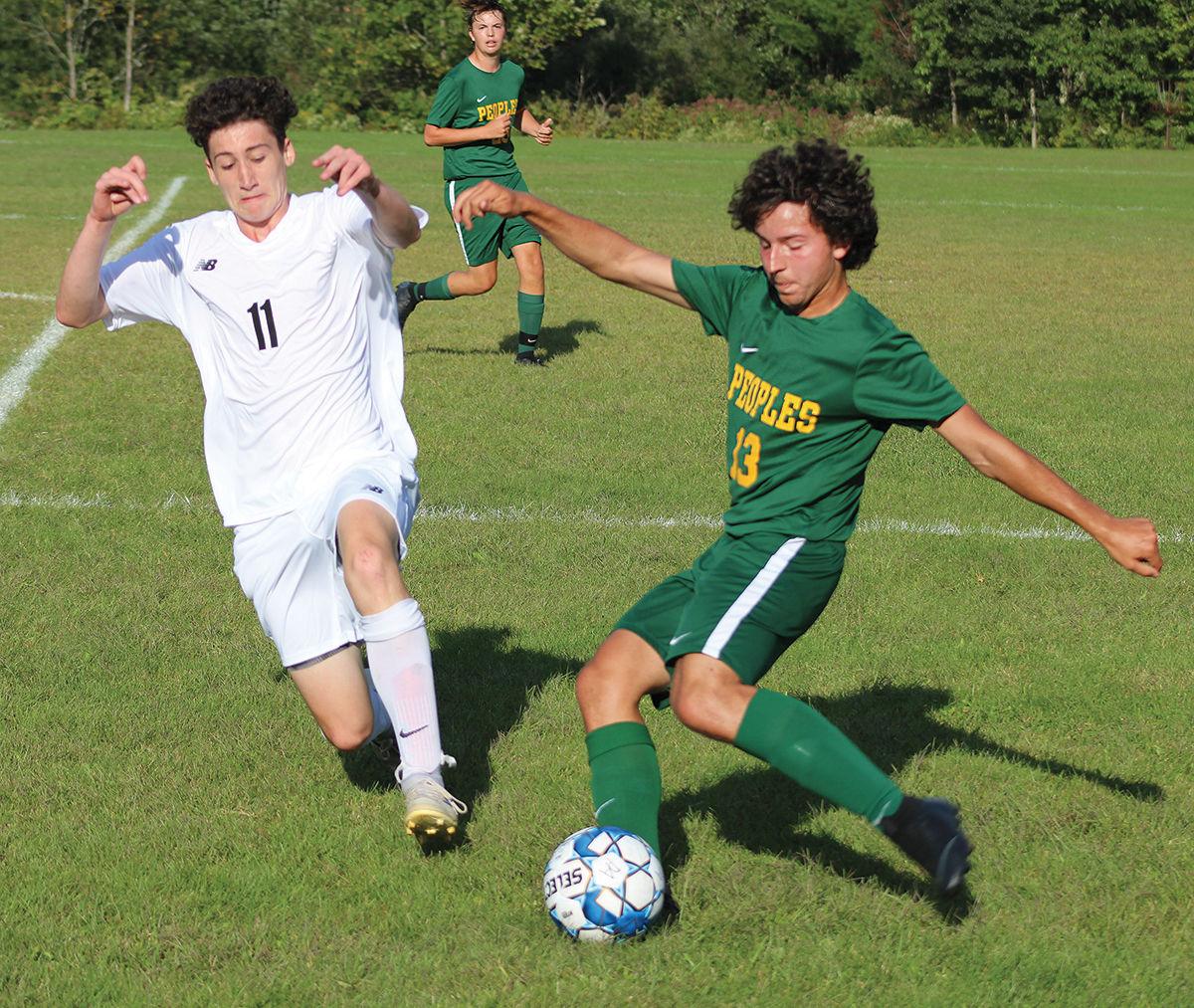 Joe Buonanno, Peoples Academy defender and senior captain, tries to clear the ball as Stowe High’s Tristan Love tries to get a foot on it in Morrisville last Friday. Stowe won the game, 3-2. 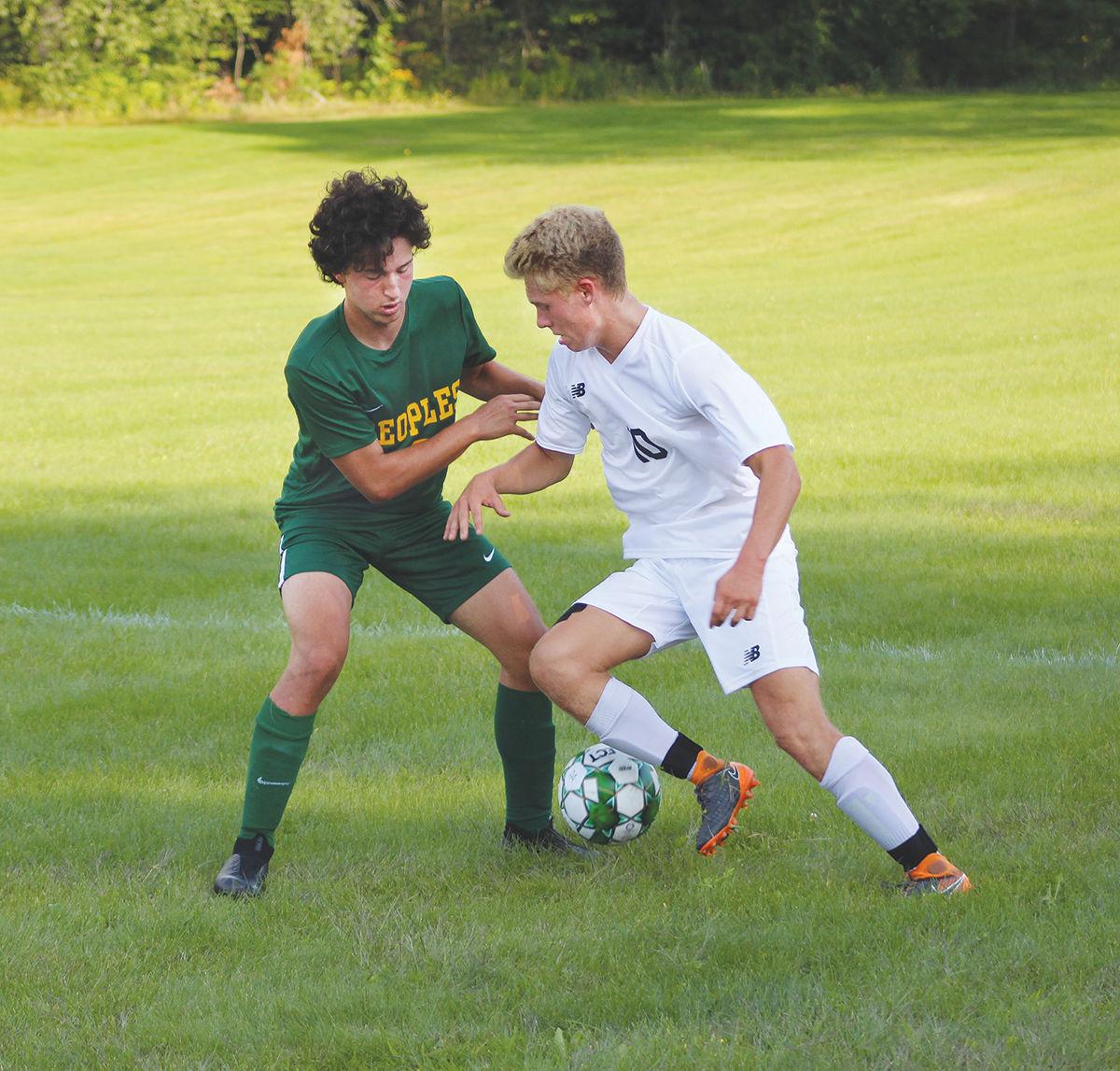 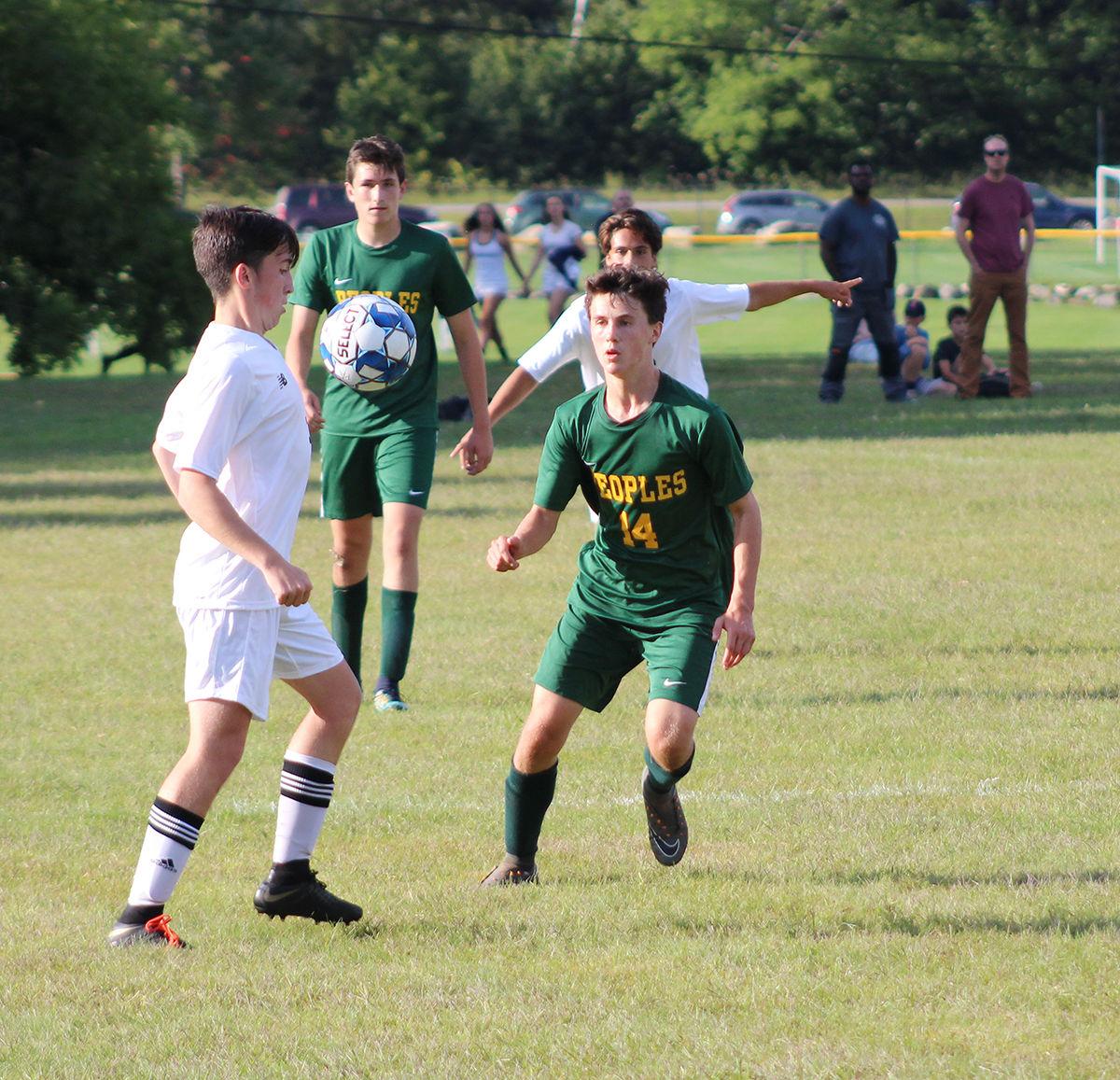 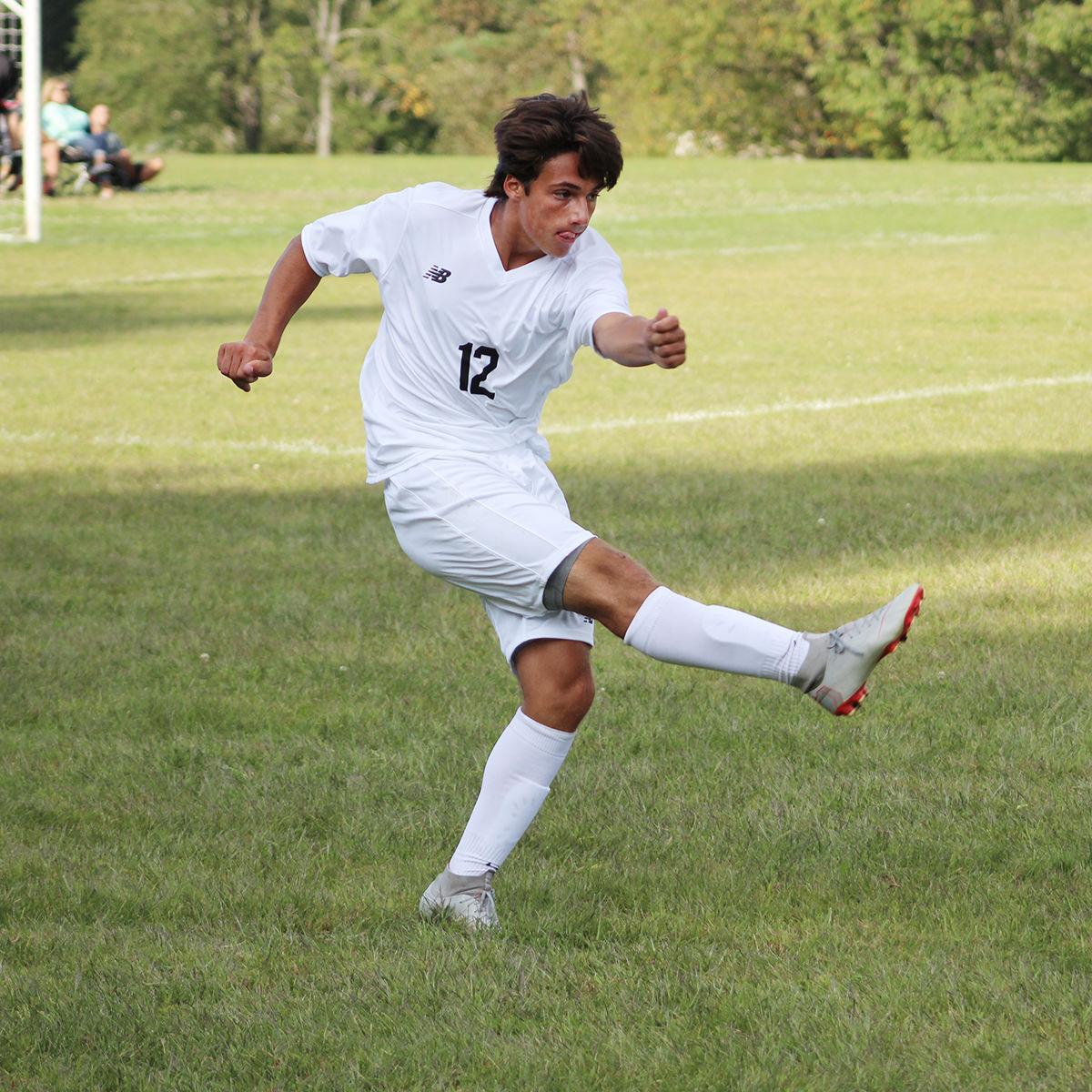 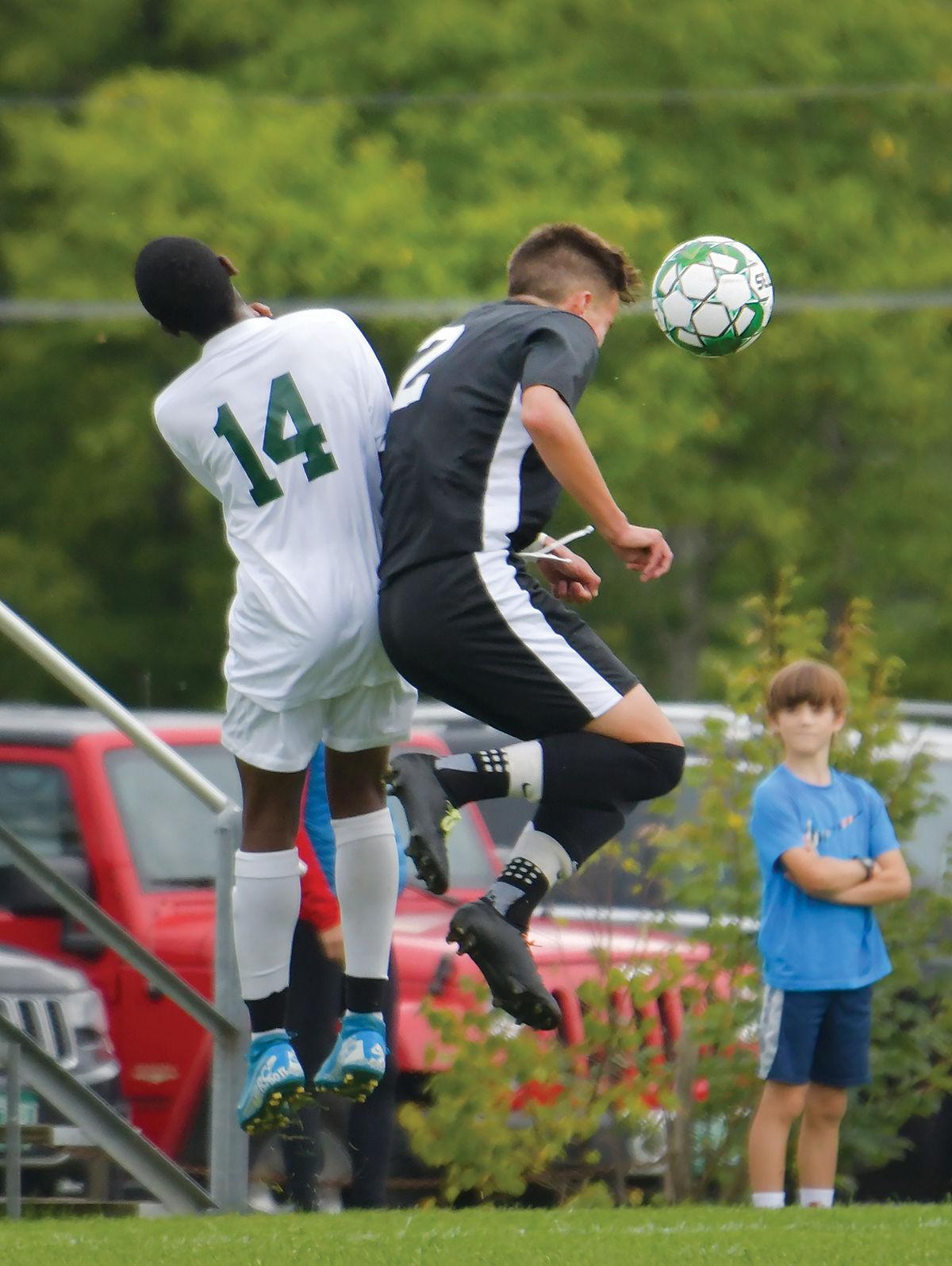 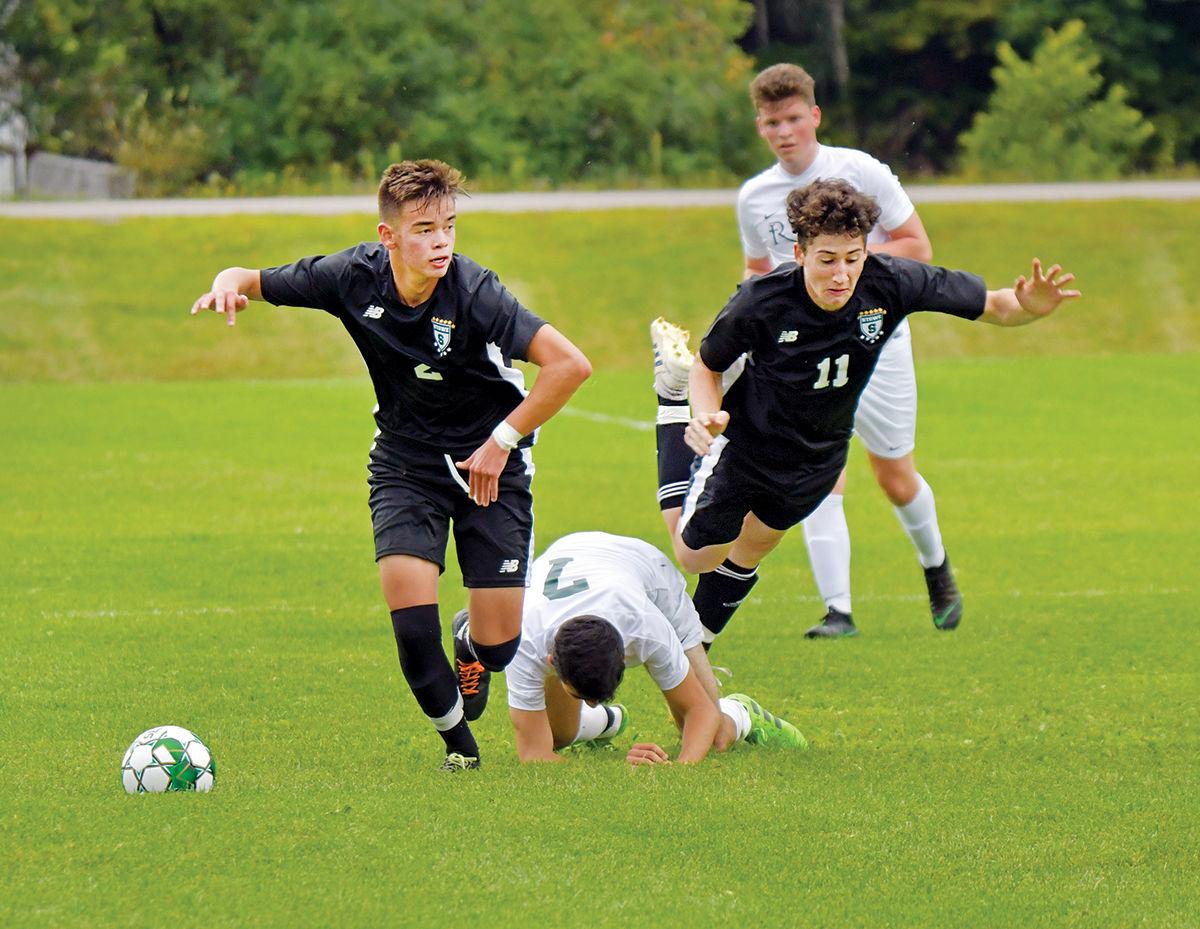 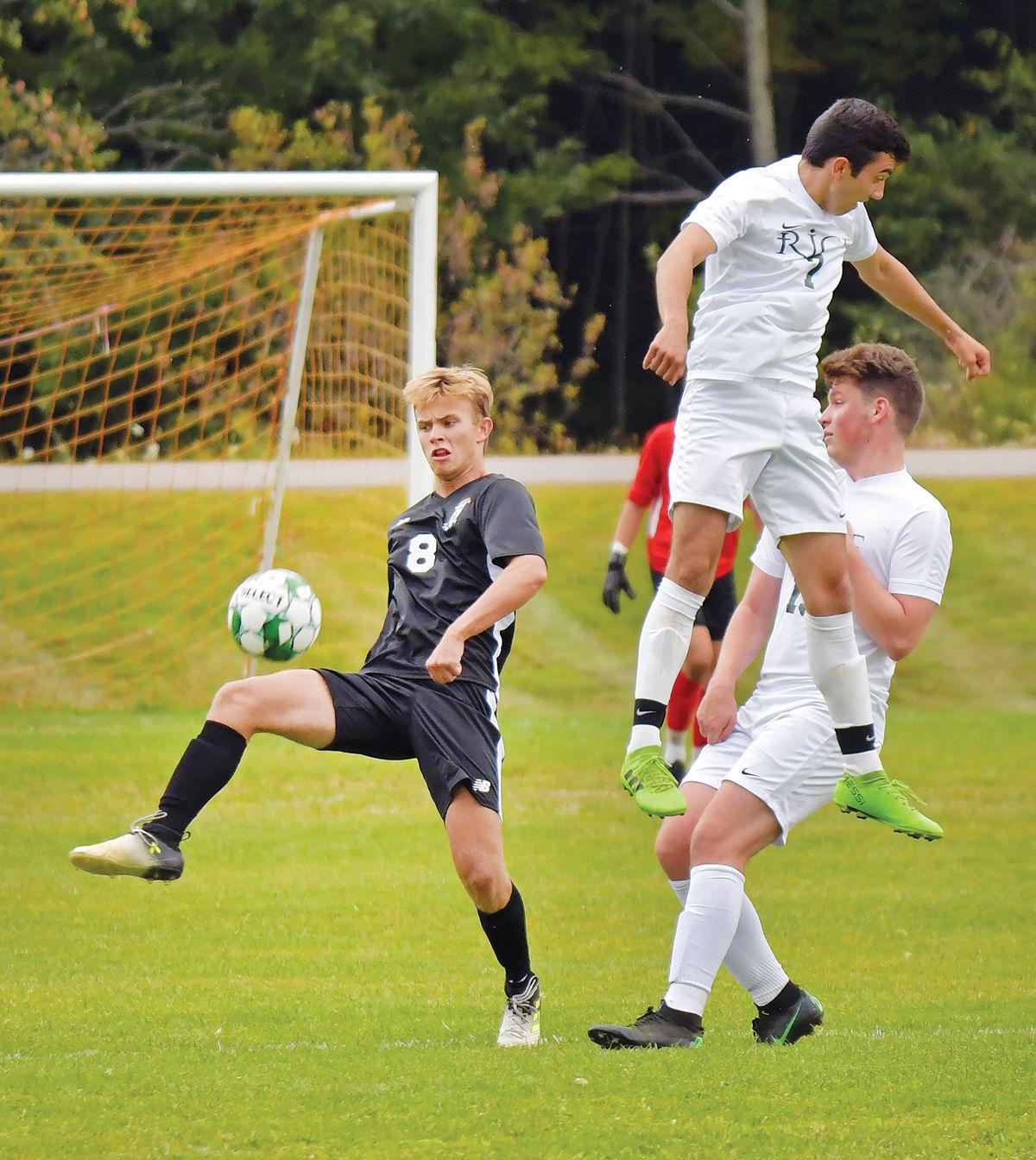 Swarming defense is a big reason the Stowe High School field hockey team — in the midst of a 7-1 victory over Montpelier — is off to a fast 3-0 start on the young season.

Stowe High’s Tristan Love soars to control the ball in a 3-2 victory over Peoples Academy.

Joe Buonanno, Peoples Academy defender and senior captain, tries to clear the ball as Stowe High’s Tristan Love tries to get a foot on it in Morrisville last Friday. Stowe won the game, 3-2.

The Raiders improved to 3-0 on the season by thumping Montpelier at home.

Stowe’s Natalie Doehla scored the game’s only goal with five minutes left in regulation, as the Raiders outlasted Harwood in a defensive battle.

Stowe opened its season with a dominant road win over U-32.

Stella Frame struck for a hat trick and Natalie Doehla scored two goals and added an assist. Abbie Rice had a single score and two assists, Carly Miller had a goal and an assist, and Challie Vicary also scored. Chloe Hazard assisted on three scores and Skyler assisted on another.

Eva Jessup scored for U-32 on assists by Cadence Burgess and Zoie Beauregard.

Seivwright scored Stowe’s first two goals and Bleda-Vilalta scored once on either side of halftime to make it 4-0.

Jack MacDonald scored Stowe’s final goal late in the second half, Jono Nissenbaum racked up three assists, and Ethan Brown and Nick Mitchell had a single assist each.

Stowe trailed 1-0 early, took a 3-1 lead by halftime and then withstood a Peoples rally to edge its rivals from just up Route 100.

Sophomore Ollie Nigro got Peoples on the board early, scoring three minutes into the game on a direct kick before the Stowe defense was set.

Stowe ramped up the pressure after that, and Rai Bleda-Vilalta tied the score midway through the half.

Jono Nissenbaum scored nine minutes later to make it 2-1 Stowe, and Nick Mitchell scored soon after on a misplayed free kick to give the Raiders a two-goal advantage.

Peoples rallied after the break, and Reese Wheeler scored on a penalty kick midway through the second half to make it 3-2. But the comeback stalled there and Stowe got its second one-goal win over the Wolves in the past two seasons.

Four players scored for Stowe as the Raiders opened the season, their first in Division 2, with a home win over Vergennes.

Jack Seivwright led the way for Stowe with two goals, Rai Bleda-Vilalta had a goal and an assist, and Ethan Brown and Adrian Bryant each scored once.

Three of Stowe’s top four golfers scored in the 40s as the Raiders beat Harwood by 26 strokes at the Stowe Country Club.

Jake Green led Harwood with a 49; Jake Lansky and Jon O’Brien each shot 52 and Liam Guyette had a 54.

Stowe’s Max Gentle had a 41, the low round of the day. Lincoln Sinclair shot a 43, Chace Newhouse 44 and Jesse Brown 53.

Stowe’s Lexi James had the low round for the girls with a 55; U-32’s Jenna Mekkelsen shot a 60, Harwood’s Maddie Cheney a 62 and her teammate Emma Kellett a 70.

Peoples was able to field a full four-member boys team for the first time in several years, and shot a 251.

Newhouse’s 38 was two shots ahead of his teammate Max Gentle. Jesse Brown and Bo Graves each shot 47 to round out the scoring members of Stowe’s team. Lincoln Sinclair was close behind at 51.

Hayden Tibbetts had the best round for Peoples, a 57. Noble Beerworth shot a 64 and Derrick Cookson and Andrew McDermott had rounds of 65.

U-32’s Jenna Mekkelsen had the low round for the girls with a 46. Stowe’s Lexi James shot a 55, her teammate Grace Dolan shot a 63 and Peoples’ Mie Baek-Jensen shot a 59.

The Valley Players present “Out of Sight, Out of Murder”