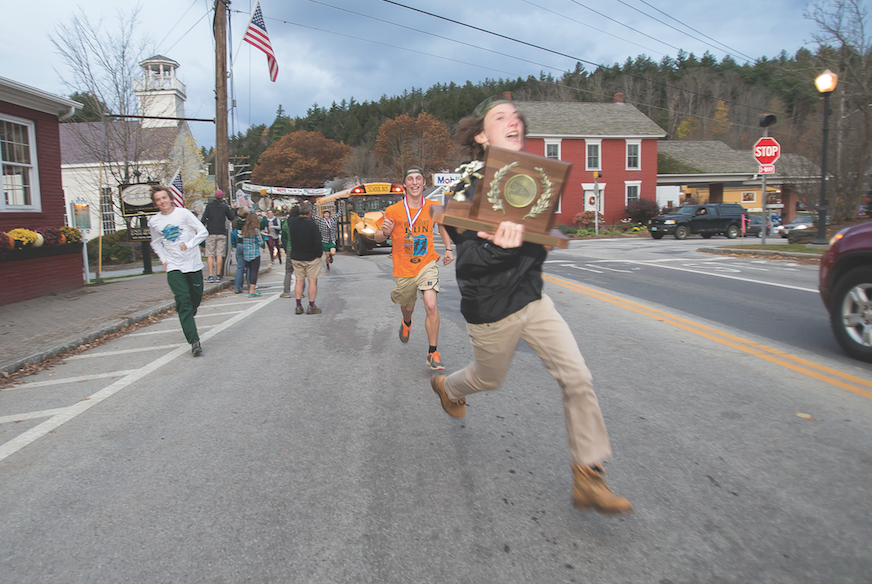 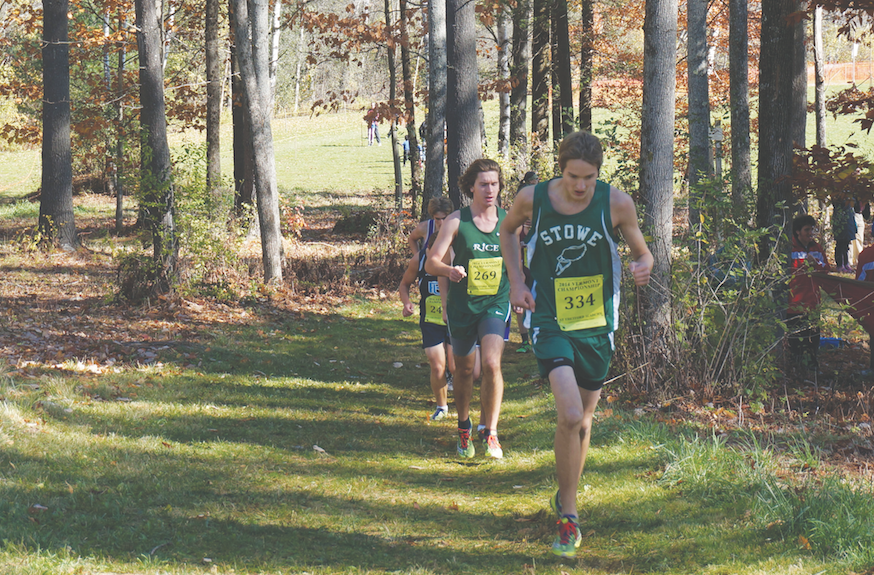 Nathaniel Wells finished 31st for the Stowe boys’ team, whose depth was key to winning a third straight Division 3 championship.

Nathaniel Wells finished 31st for the Stowe boys’ team, whose depth was key to winning a third straight Division 3 championship.

From poorhouse to powerhouse: The Stowe High cross-country program is establishing a tradition as one of the best in Vermont.

Credit Coach Becky McGovern, who sparked the rebirth of Stowe High cross-country after the team’s funding was cut entirely from the school budget. She organized firewood-stacking and bake sales to raise money to cover the team’s expenses, and made cross-country a go-to sport for the school’s athletes.

And what a payoff.

The Stowe High boys’ team cruised to a 15-point victory over second-place Rice, and the girls finished third behind BFA-Fairfax and Oxbow.

Leading the way for Stowe was the coach’s son, William McGovern, who finished seven seconds out of first place and qualified for the New England Championships Nov. 8 in Manchester, Conn.

Depth was the key for both Stowe teams.

For the Stowe girls, Heidi Brynn was the top runner, in 10th place; Amelia Nuzzo was 13th, Rosalie Wasser 25th and Fiona Reed 26th, among 78 competitors.

“The season was great!” said boys co-captain Zach Masi, a senior. “We had a very strong varsity team, and a great JV and girls team. If it wasn’t for the cheering support and the pressure from the team during the race, we really couldn’t have done it. It was a full team effort, just like last year.”

Coach McGovern noted her boys’ team finished seventh overall, including the larger Division I and Division II schools. The top six teams move on to the New England Open Championship, and Stowe missed by a whisker. Now she has a new goal for next near.

“Yes, New Englands will certainly be a goal of mine for next year,” she said, and that 2015 meet will be held in Thetford.

While the Stowe boys’ team narrowly missed a trip to Connecticut’s Wickham Park on Nov. 8 for this year’s New Englands, it will be represented by co-captain William McGovern, who earned a trip as an individual runner. The top 25 runners in the state move on to the New England meet, and McGovern is ranked ninth.

For McGovern, a junior, this will be his second run at the New Englands.

“I am really excited, he said. “It is really fun to run against the fastest high school runners in New England. It is a really fast, competitive race.”

As for next season, McGovern shares his coach/mother’s lofty goals.

“I am looking forward to our team next year,” he said. “We are returning most of our varsity and hopefully some younger runners will step up to fill our graduating seniors’ places.

“I definitely think we will have a good chance of winning our fourth championship next year. We were so close to qualifying for New Englands this year that I think qualifying next season would be a great goal. A lot can happen in a year, though, so it is hard to make predictions.”

“We’re always pretty competitive with Rice,” Coach McGovern said. “We watch them, keep an eye on them.”

And on Saturday, “each of our runners was ahead of each of theirs.”

Conditions were ideal, she said: “It was a beautiful fall day. The temperatures were great.” The trail was well-drained; some state meets have been run in slushy or snowy conditions.

On boys’ winner Chris Gish of Sharon, the Stowe coach said, “Chris and William have been going back and forth since eighth grade. I think if there’d been another mile, William could’ve gotten him.” William McGovern had been running third all race until he caught his Rice rival, Will Lacroix, on the final hill, beating him by seven seconds, the same gap between McGovern and Gish.

Still, she thinks she’s going to need to do some recruiting to replenish the freshmen ranks.

“Heidi (Brynn) had a spectacular race,” finishing 10th in Division 3, Coach McGovern said, and the team’s performance was bolstered because “the freshmen girls had a nice progression this season.”

As for the team’s third place finish: “I think they were pleasantly surprised.”

The girls’ team had a lot of new faces this season; even the juniors on the team were new to cross-country. And the team isn’t losing anyone between now and next season, so McGovern has high hopes for next fall.