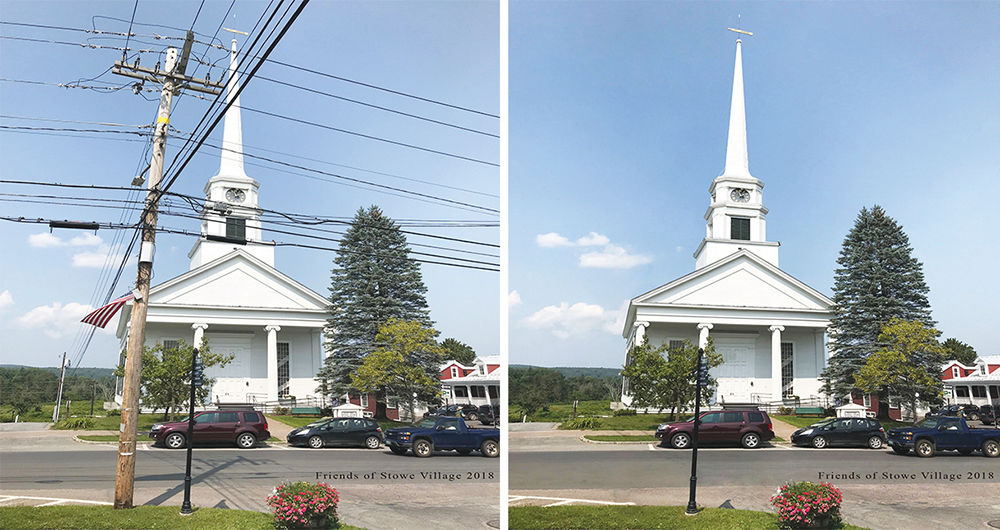 In an effort to persuade Stoweites to vote for the $3.2 million power line burial, Stowe artist Scott Noble shared before-and-after photos showing choice spots with and without the lines. He sent the photos to a company called Retouchup.com, which digitally removed the wires. 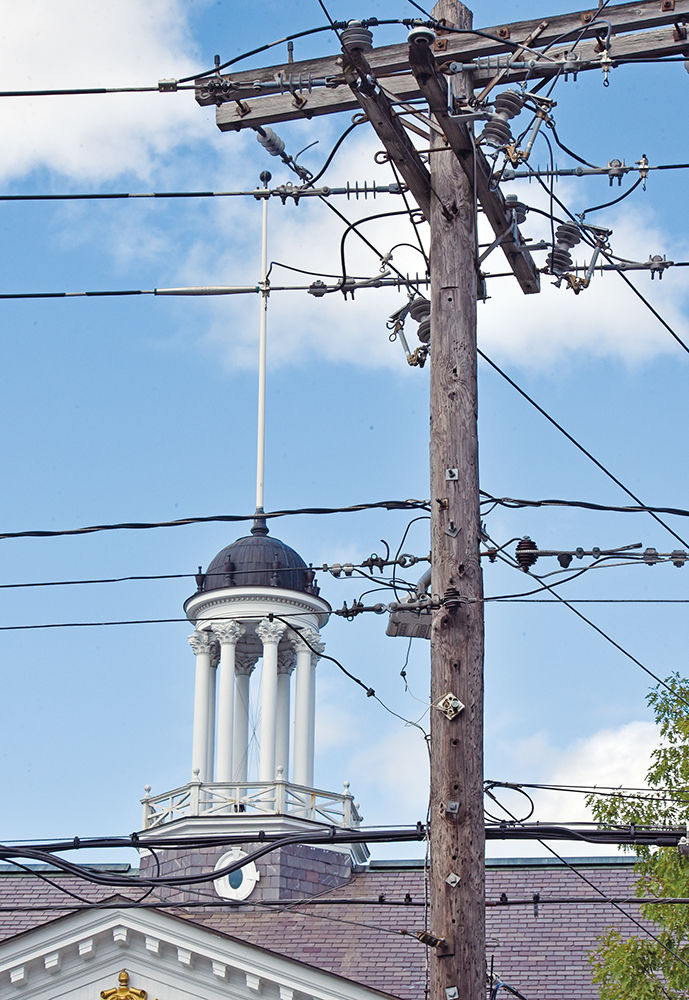 Workers will take down the utility poles along Main Street in Stowe village, but probably not until next fall.

In an effort to persuade Stoweites to vote for the $3.2 million power line burial, Stowe artist Scott Noble shared before-and-after photos showing choice spots with and without the lines. He sent the photos to a company called Retouchup.com, which digitally removed the wires.

Workers will take down the utility poles along Main Street in Stowe village, but probably not until next fall.

As surely as the autumn brings down the leaves from Vermont’s trees, workers hope to take down the utility poles along Main Street in Stowe.

But it probably won’t be until next fall.

Town officials say the installation of conduits to house all of those myriad wires from five utility companies is “significantly complete.” The Stowe Electric Department will be the first to go down under.

Abby Earle, the town’s executive assistant, said Wednesday that Gould Electric has started blowing “pull-strings” through the conduits. Those will soon be used to feed what will likely be miles and miles of wire into the tubes.

Earle said most of the disruptive work — tearing up the ground and refilling it — is entering a denouement for 2019, and crews will finish what they can before the concrete plants close up for the winter.

There will likely be some traffic disruptions next week as crews pour concrete for sidewalks near the Mountain Road downtown intersection and on School Street, which are now dirt paths surrounded by new granite curbs.

Even after that earthwork all wraps up, even if the snow starts to fly, crews will be able to work underground without disrupting anything, because those cleverly buried tubes are protected from the elements.

Last week, when detours rerouted traffic around the middle of town, was a busy one for the town office phone lines, with annoyed people on the other end. Earle said the crews are doing their best to be cognizant of the increased traffic as leaf-peeper season kicks in.

“We’re balancing how much the public will tolerate” with getting as much work done as possible, she said.

One big test of the crews’ ability to be agile came last Friday evening with the British Invasion Block Party, which shut down Main Street for music, frivolity and a whole lot of old British cars.

Earle said it went off without a hitch, or anyone falling into a hole.

Said Scott Noble, a Stowe artist and longtime village cheerleader, “I was really impressed at the British Invasion how they had it cleaned up and nobody even noticed.”

Noble, now retired after running Green Mountain Fine Art Gallery in the village for 18 years — it is now closed — was one of the main movers and shakers in trying to get the town to bury its lines.

At one point, he commissioned an artist to paint a Main Street landscape just as is, but without the utility lines and poles. Since then, he said, countless tourists have come to Stowe and taken photos of places like Stowe Community Church, Shaw’s General Store, the Green Mountain Inn, the covered walking bridge.

One thing they all had in common? They had to figure out a way to avoid the wires crisscrossing the sky. Just watch how many people stand in the middle of the road at Main and School streets to snap a shot of the steeple against a bluebird sky this season.

Last year, in an effort to persuade Stoweites to vote for the $3.2 million power line burial, Noble used a series of before-and-after photos showing choice spots with and without the lines. He sent the photos to a company called Retouchup.com, which digitally removed the wires.

Noble knows the power lines won’t be down this year — the lines that crews are running through the conduit won’t go live until they are in place and switched over, one utility at a time. Earle said the real hurrah moment won’t come until the end of the 2020 construction season, when the poles come down.

Noble said the entire project — sidewalks and power lines and all — is being “managed beautifully” by public works director Harry Shepard.

“I think the project is going along terrifically well,” he said. “We always expected it would be a challenge, digging up almost every piece of pavement and replacing it, with all of that under it.”

The rebuilding of sidewalks and preparation to bury utility lines in Stowe village continued this week.