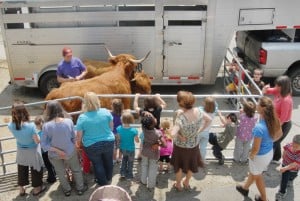 Ray Shatney briefs youngsters and adults at Morrisville Graded School on the Scotch Highland cattle that he and his partner, Janet Steward, a teacher at the school, raise in Plainfield. 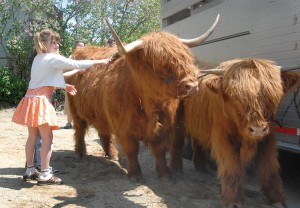 Ray Shatney briefs youngsters and adults at Morrisville Graded School on the Scotch Highland cattle that he and his partner, Janet Steward, a teacher at the school, raise in Plainfield.

A closeup of a shaggy beast.

You could say that Swirl’s Girl and her calf, Tom’s Boy, are cattle with a cause.

Last Friday, the Scottish Highland duo were guests at Morristown Graded School, where eager students combed their shaggy reddish-brown hair and carefully placed the combings into a cardboard box.

The hair will help to clean up the disastrous oil spill threatening wildlife and livelihoods along the Gulf Coast.

The cattle’s owner, first-grade teacher Janet Steward, will donate the hair to Matter of Trust, an organization that will use the hair to make mats that help sop up the spill.

The Deepwater Horizon oil rig exploded April 20 and collapsed into the Gulf of Mexico about 130 miles from New Orleans, in water nearly 5,000 feet deep. BP Oil ran the rig, located about 50 miles from the Louisiana coast, and had drilled a well in the sea floor that has gushed hundreds of thousands of gallons of crude oil since the explosion.

The spill has reached parts of the gulf coastline and is threatening more than 300 species of wildlife and the local seafood industry. Efforts to cap the gushing well have failed so far, and U.S. lawmakers have been threatening to take over the cleanup.

Steward and her partner, Ray Shatney, own Greenfield Highland Beef, a Plainfield-based Scottish Highland cattle meat and breeding business. They have a herd of about 100 cattle, including several that have won top honors at national livestock shows.

Scottish Highland cattle have changed little over the past few millennia. They resemble buffalo because of their extremely shaggy hair and large horns, which served to keep them warm and safe when they roamed the Scottish highlands.

Steward, who has taught first grade for nearly three decades, spends the final semester of each school year focusing on mammals. Each student selects a mammal to study and creates an elaborate visual-arts presentation, including written and verbal reports, artwork and a papier-mache mammal.

The semester culminates with a “mammal fair” akin to a science fair.

After learning about Matter of Trust, Steward decided to donate hair from her herd and to incorporate the project into her mammal study. She used the oil spill as an example of how pollution and manmade disasters can hurt wildlife, and taught her students that everyone — even cows and children — can help.

“We’re going to make the oil spill stop,” said Gage Slaughter, 7, as he ran a metal comb through Swirl’s Girl’s hair. “They’re going to make hair mats to soak up the oil and make it stay in one spot.”

Some students opted to collect their own hair combings to add to the cattle hair. Others, who’ve had haircuts in recent weeks, saved and donated the hair clippings.

“When I got my hair cut, I saved it,” said Natalie Barbour, 6, holding up a plastic bag filled with hair clippings as she stood in line waiting her turn.

While Steward and Shatney usually groom their cattle only before shows, they’ve been combing them during the past few weeks and have clipped the steers that don’t go to the shows.

So far, Steward has collected five boxes of hair.

Matter of Trust is accepting donations of human hair and animal hair and fur from salons, pet-grooming businesses, schools and individuals.

Volunteers sort through them to remove debris. Loose hair can then be stuffed into nylon stockings, which are doubled up and tied together to make “booms” that surround, contain and soak up oil spills.

The organization also sends some of the hair to factories to make batches of hair mats. The mats are for emergency oil spills and for the interior of cages for oiled birds and mammals.

The bad news: Hair’s not welcome