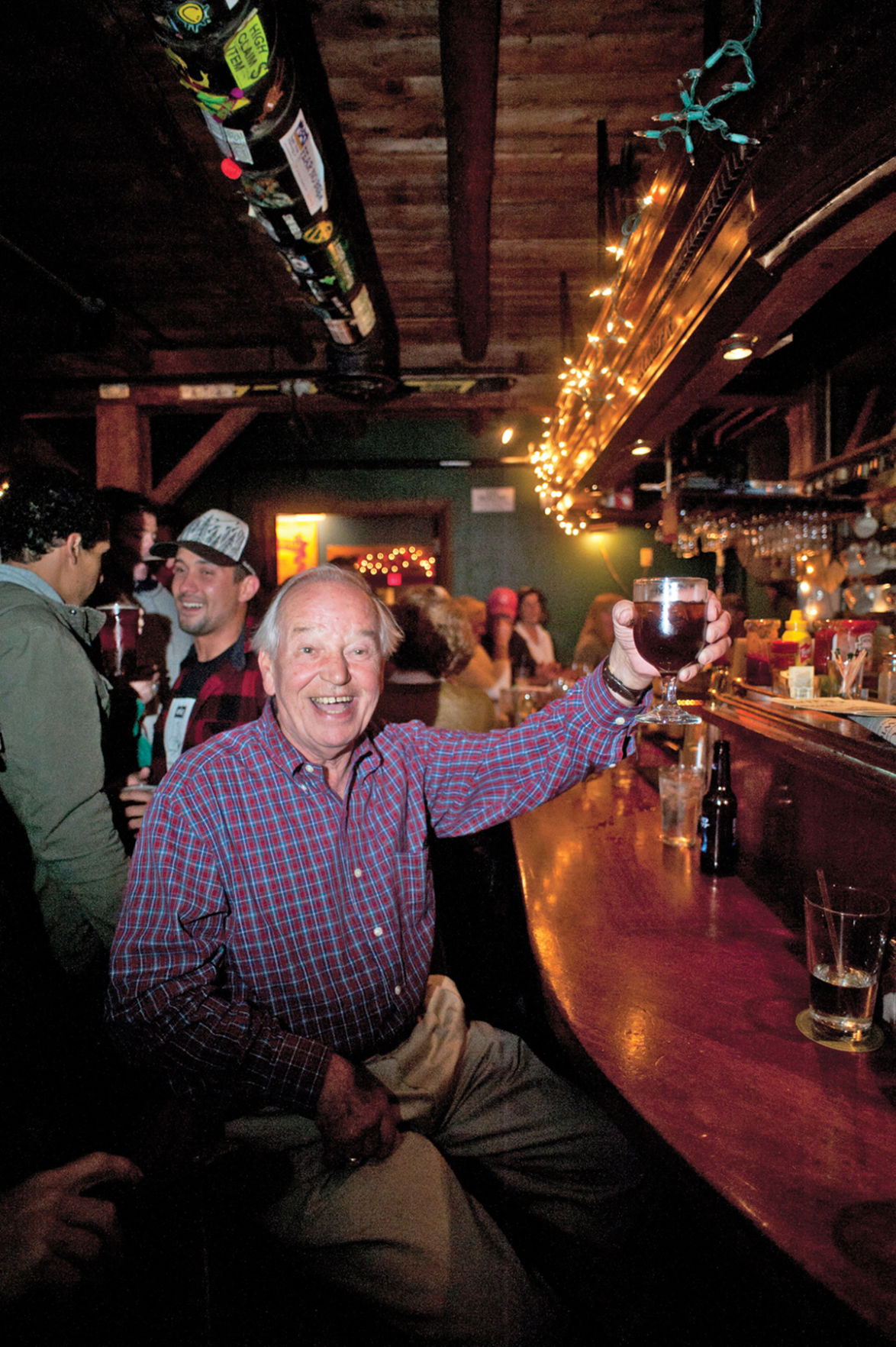 On the night the Shed closed for good in October 2011, Ken Strong hoists a glass at the bar and restaurant he helped to build. 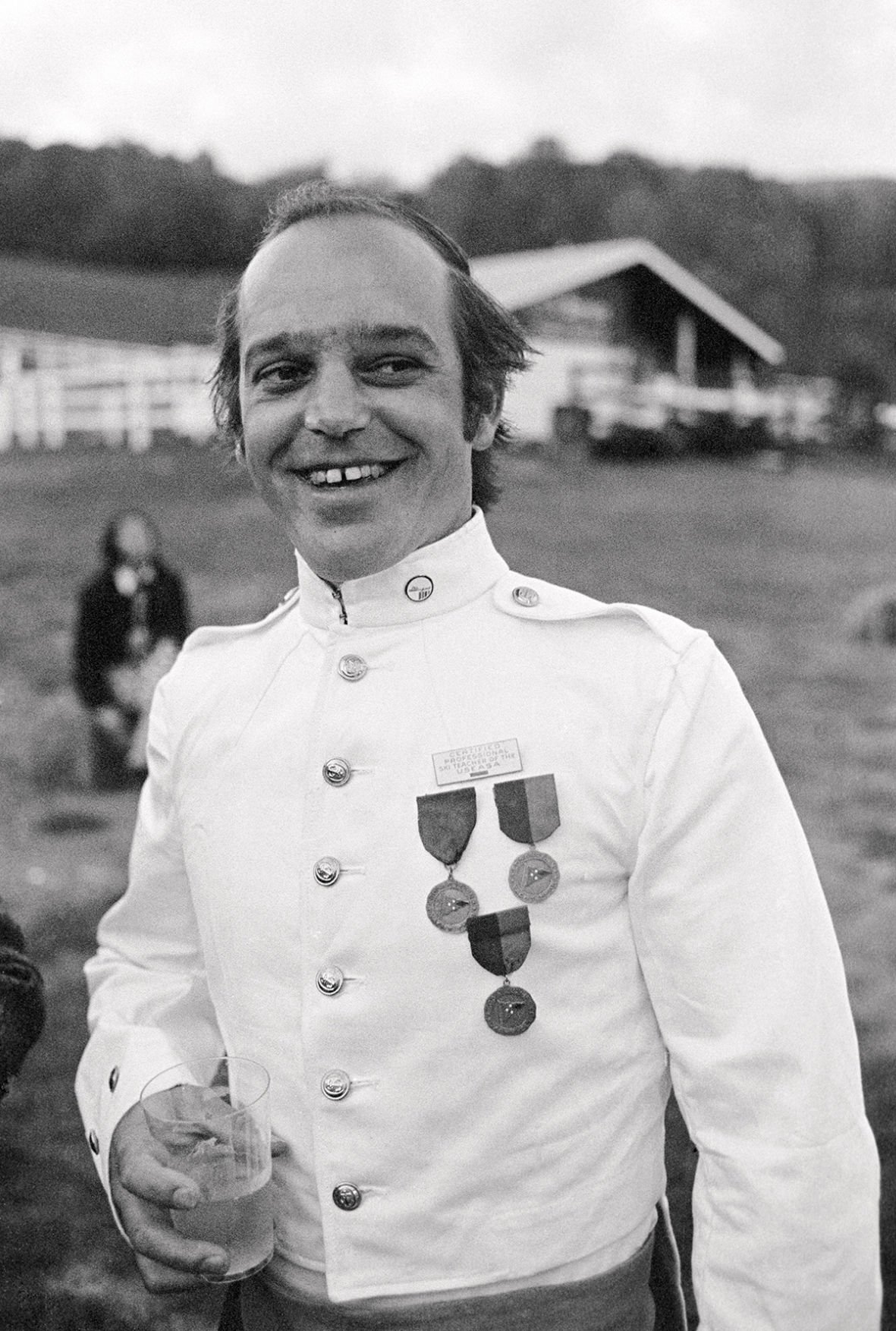 Ken Strong founded The Shed in 1965 with Ted Ross when both were ski instructors at Stowe. The bar was the epicenter of the 1960s ski-bum counterculture. 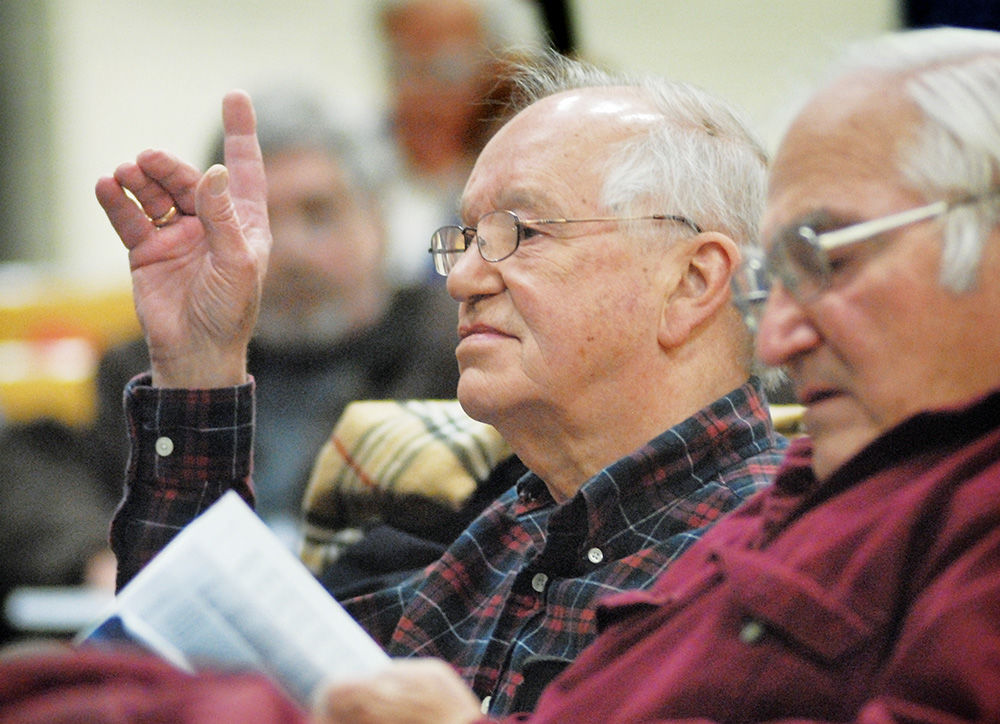 Strong was an annual fixture on Town Meeting Day in Stowe, where he generally had a comment or two. 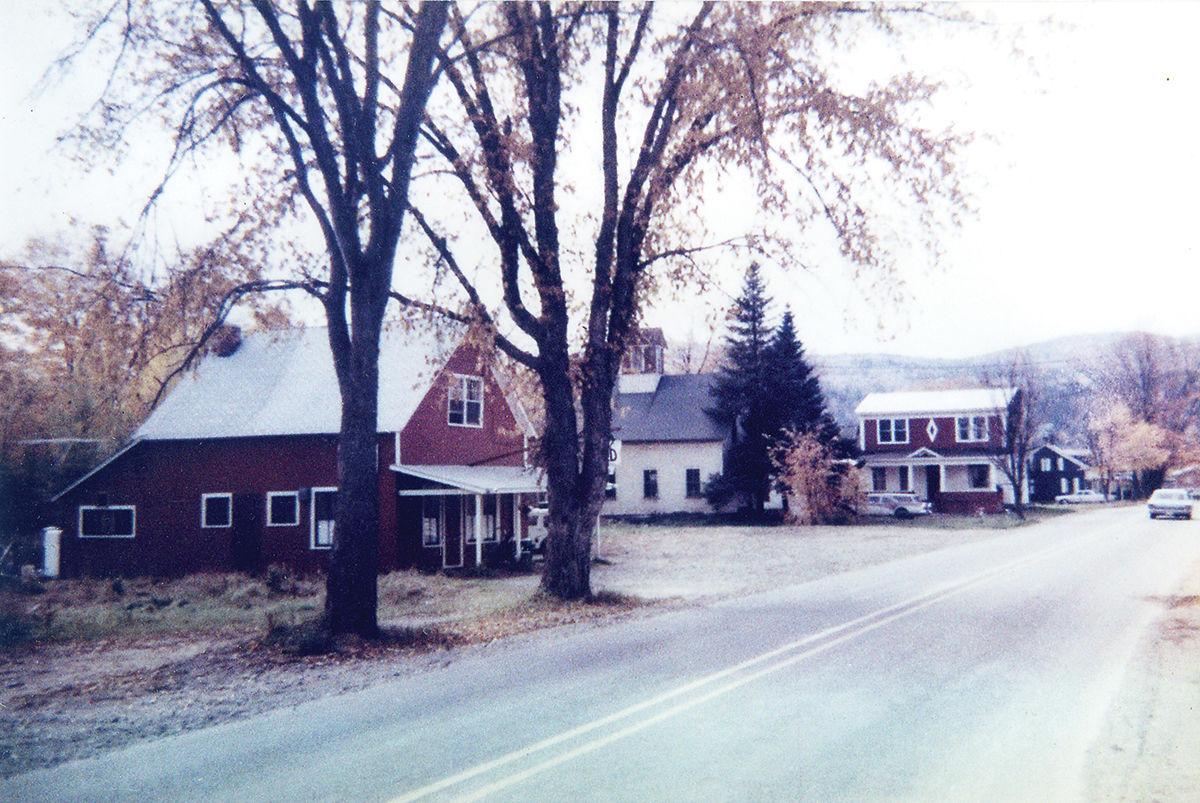 The Shed in the early days, when it was really little more than an actual shed. 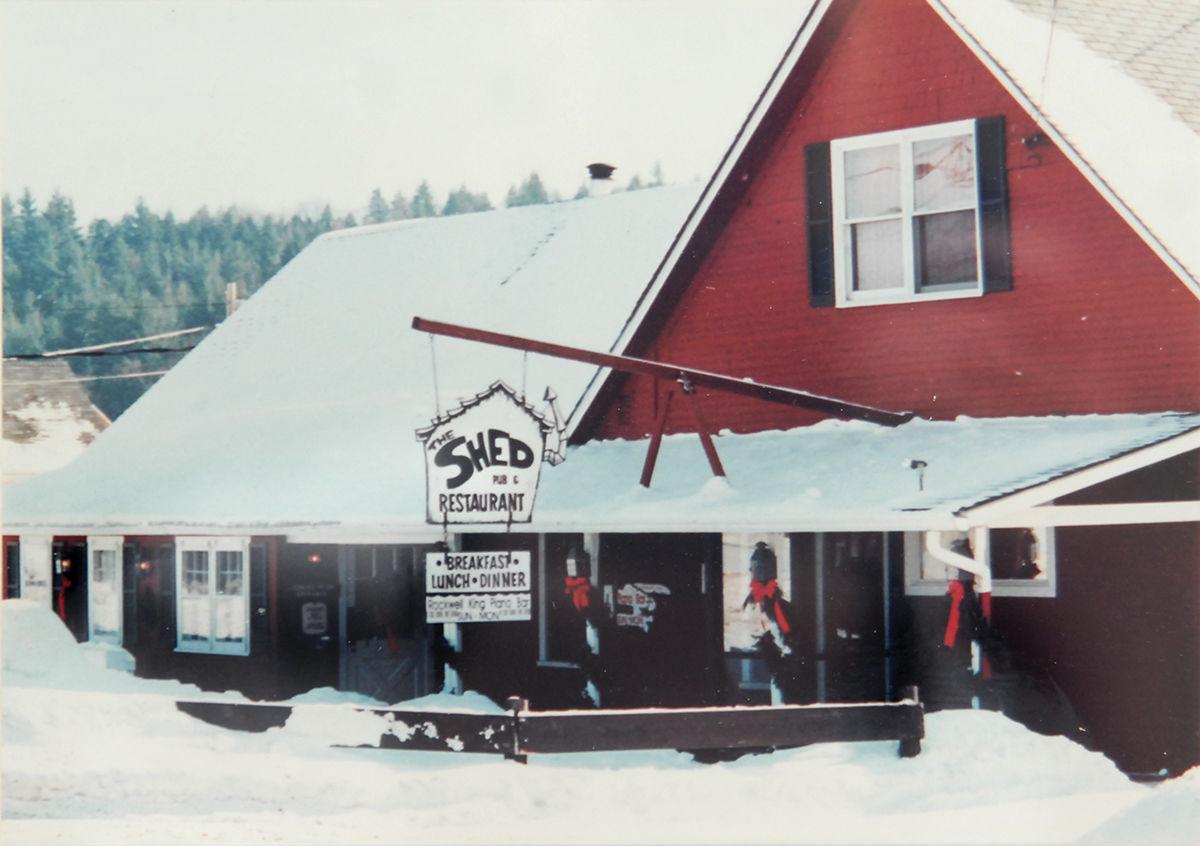 The Shed in the early days.

On the night the Shed closed for good in October 2011, Ken Strong hoists a glass at the bar and restaurant he helped to build.

Ken Strong founded The Shed in 1965 with Ted Ross when both were ski instructors at Stowe. The bar was the epicenter of the 1960s ski-bum counterculture.

Strong was an annual fixture on Town Meeting Day in Stowe, where he generally had a comment or two.

The Shed in the early days, when it was really little more than an actual shed.

The Shed in the early days.

Ken Strong was a legend — a pioneer in Stowe’s restaurant and bar business, a pillar of the community and an all-around good guy.

His iconic bar and restaurant, The Shed, was the source of boundless stories that define an era past and helped shape what was to come. He was a friend you could count on, whether you occupied a stool several nights a week or a few days a year.

His instinctual hospitality never changed in the four and a half decades The Shed welcomed people looking for a pint and friends after a fun day on the slopes or a long one at work.

Strong died April 17, after a two-year battle with cancer, but memories remain vivid for his countless friends and his role in shaping Stowe.

‘Finally a place to go’

It’s hard to imagine a time a Stowe that wasn’t flush with restaurants and bars, but that was the case in the 1960s before Strong opened The Shed with his business partner Ted Ross.

Aside from lodges and hotels, the only place to grab a drink year-round was the Yankee Tavern.

“I was scared to go in alone,” said Nancy Stead, a longtime columnist for the Stowe Reporter. Yankee Tavern was where the “serious drinkers” were, she said. “I had no problem going to The Shed alone,” she said.

That was the whole point: build a place where ski bums and locals could have a good time. The idea was hatched at Jim Jackson’s house, where Strong was living, over a night of drinking in the summer of 1965.

Paul Biedermann, owner of the Snowdrift Motel, was there and had a small building that had served as a cider mill, hostel and gas station over its 130 years. Strong and Ross came up with $2,500 each and bought it.

Stead was selling real estate at the time and remembered showing the property just after the sale.

“When I came with my customer, it was too late, but I’m glad Ken won,” Stead said.

Hank Cushman, then a ski instructor who worked with Strong, was there the night the scheme was hatched. He and a handful of others helped Strong and Ross renovate the space.

“It was quite a bit of work,” he said, but “most of us were carpenters or something anyway.”

The Shed opened that December, and the good times rolled.

“There was finally a place to go and have a glass of beer,” Cushman said.

The space was tight with stools and tables and smoke from cigarettes and the kitchen. The beer poured for 15 cents — Budweiser primarily — and stories of raucous nights could fill volumes of books.

Clocks were blasted with a shotgun. A horse stopped in. A Christmas tree was mounted to the ceiling one year. Many nights continued deep into the morning. Back then, a cop would follow patrons home to make sure they made it OK. It was a drinking culture.

“The drinking was Olympic,” said Charlie Lusk, later a Stowe Select Board member and now a library trustee. He lived in Jackson’s building with Strong and started working at the Shed in 1967.

In all this festivity and chaos, the constant was Strong. He was at The Shed seven days a week, flipping Shed Burgers and keeping patrons watered.

“He went along with it, but kept it down to a dull roar,” said Cushman, the one who brought that aforementioned horse into the establishment.

“It was the glue of our social life,” Stead said. “And Kenny was always so glad to see everybody.”

“There was a modest generosity to the man; you had to know him to see it happening,” Lusk said. He may have been too generous in some ways. Lusk figures there’s still a cigar box full of unpaid tabs somewhere in Strong’s possessions.

Behind the bar, Strong had an endearing poise, the kind that made anyone feel at home.

“He was kind and funny, quick with the jokes, the laughter,” Stead said. “He had a laugh you could hear two counties away.”

“Whenever the phone rang, before Ken would pick up, he’d ask, ‘Who’s not here?’ ” said Kitty Coppock, Ted Ross’s first wife. “Not only did he run the best bar in town, he was the best bartender.”

“It was a good time, kind of loose and everyone knew everyone else,” Cushman said. “I haven’t seen a place like that since.”

The Shed’s reputation grew and matured along with the town of Stowe. The building was expanded a few times but then burned down in 1994. A much larger building took its place.

Some Shed regulars liked the old place better — the one that had actually been a shed — but the new Shed was a testament to Strong’s ambition.

“It was the apple of his eye. He really cared about the kind of place it was,” Lusk said. “He was doing what he wanted to do — he wanted to grow the business.”

“When people talk about The Shed never being quite the same, they’re not talking about The Shed; they’re talking about the times in general,” said Nate Lusk, Charlie Lusk’s son. He practically grew up at The Shed, and he worked there in the 1990s into the early 2000s.

Though the building changed, Nate said Strong’s dedication to the bar and community did not.

He recalled a busy night working as a busboy and seeing the dishwasher tired and overwhelmed.

“Kenny, on New Year’s Eve in a three-piece suit, looks at the dishwasher, pushed him aside and absolutely crushed it,” he said. “That is something that’s stuck with me through life and, in fact, is one of the things that made me successful.”

In its new form, The Shed started brewing beer — the hefty Shed Mountain Ale now distributed across the country — a decade before The Alchemist opened its brewpub in Waterbury. Even though The Shed had to close its doors in 2011, the Mountain Ale lives on.

Strong’s mark on Stowe goes beyond his beloved bar. He had a large role in founding Stowe Performing Arts and was an active board member of many public and private organizations.

He was a people person through and through.

Nate Lusk recalled when he and his father visited Strong in the hospital.

“I was dreading it and thinking ‘this is gonna be awful’ and I was really upset about it,” he said, but Ken Strong was still Ken Strong. “I came out of there feeling like a million bucks. That’s the effect Kenny has on people.”

The Shed: Requiem for a skier’s bar