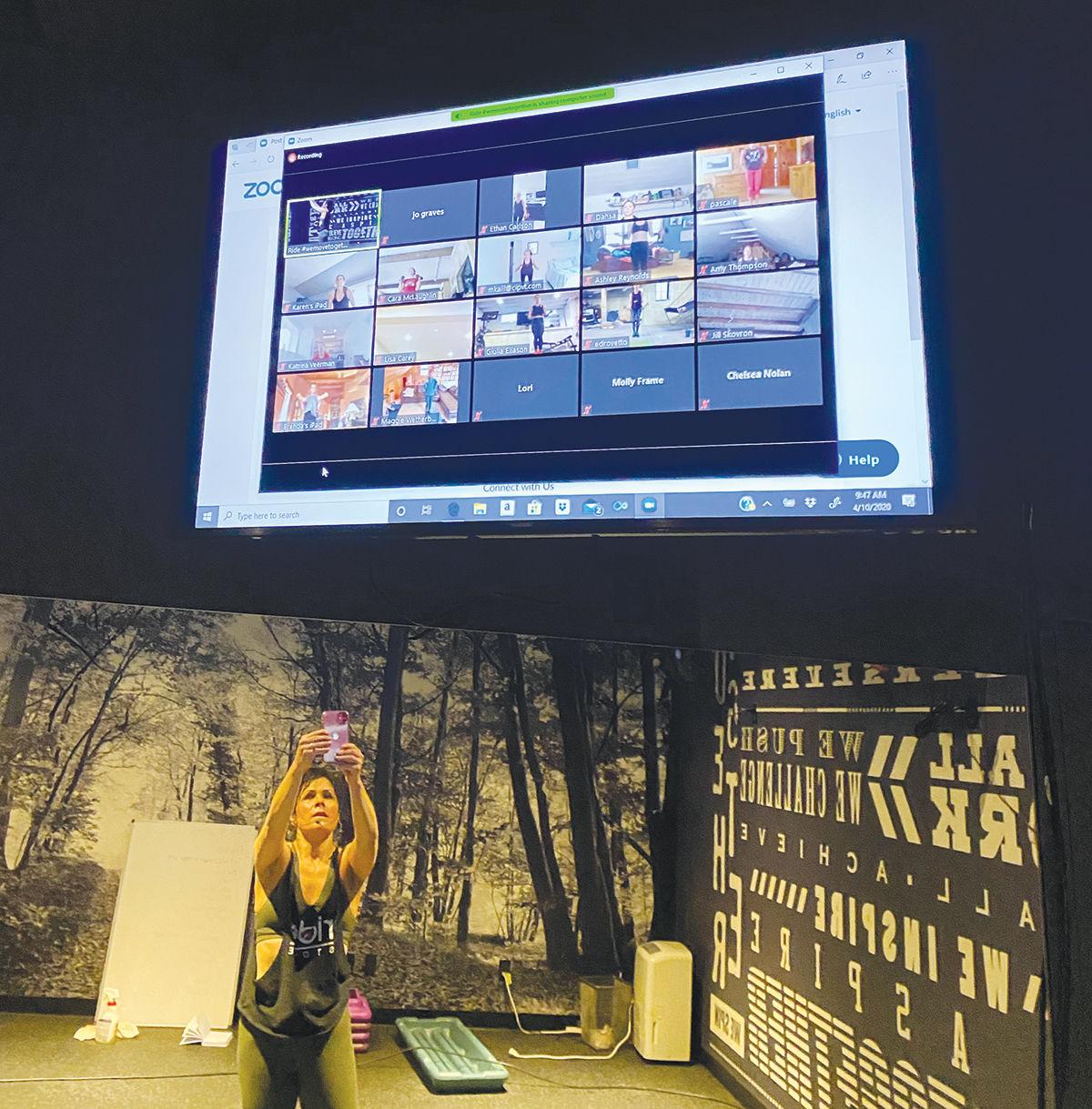 Joanna Graves, owner of the Stowe gym Ride, runs a group class as at least 20 clients follow along with her via video. 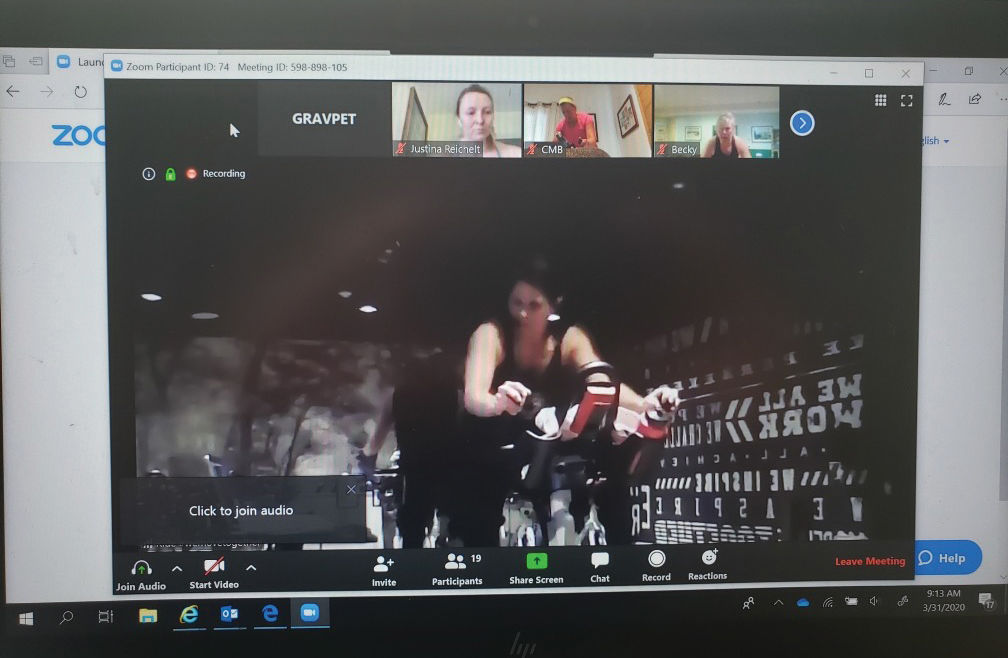 Joanna Graves leading the pack on her cycle. 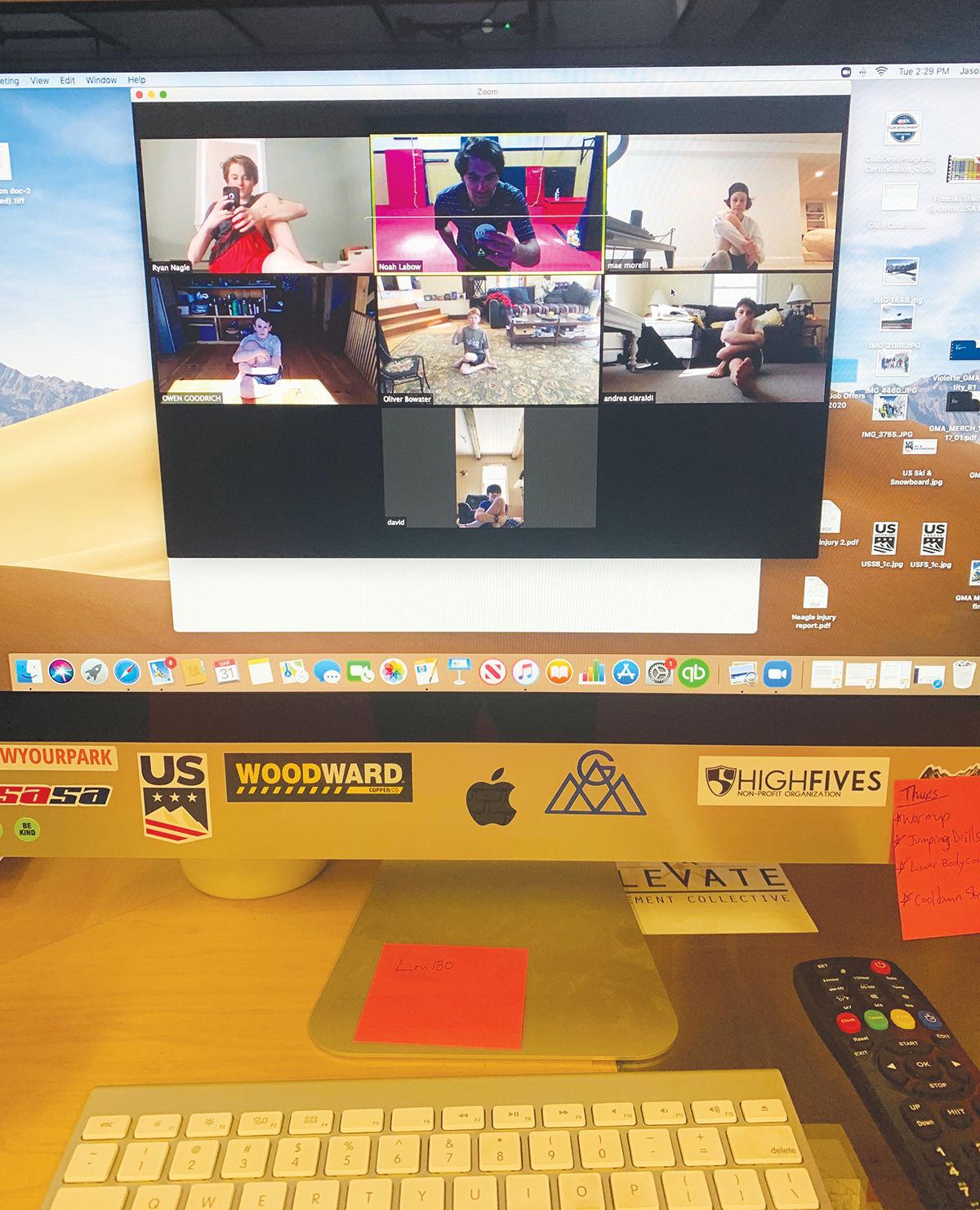 Joanna Graves, owner of the Stowe gym Ride, runs a group class as at least 20 clients follow along with her via video.

Joanna Graves leading the pack on her cycle.

On social media recently was a prediction that people will emerge from this stuck-at-home era in one of four ways: hunk, chunk, drunk or monk.

To make sure more people end up in the first category, some fitness center owners have brought their gyms to people’s homes.

Joanna Graves, owner of Ride by JoMotion in Stowe and a former Stowe High athletic director, is bullish on keeping active, especially with all the added stress the pandemic has brought to people — first there was the fear, then there was the frustration, the boredom, the loneliness. Kids are home instead of in school, the spouse is there instead of at work. And you aren’t at the gym.

“Exercise is hugely important,” Graves said. “It’s an hour that you take, that you give yourself, this time to focus on you, to kind of allow your mind to go somewhere else.”

There are times where she jumps off her bike after a hard workout and just gets teary-eyed, after after the world comes back following her sheer focus on sweating.

Noah Labow, owner of Elevate Movement Collective, also in Stowe — a gym dedicated to training people in aerial routines and ninja warrior moves, with an emphasis on trampolines and climbing apparatus — said it’s difficult to maintain discipline when you’re stuck at home.

Women are perhaps more affected by the pandemic, according to Pat McCuen, owner of Curves in Morrisville, part of the national gym franchise chain aimed solely at women. Nationwide statistics show that women have been laid off in greater numbers than men, and some are calling it a “shecession.”

“Women in particular, you’re helping everyone else, and you put yourself on the back burner,” McCuen said. Her advice: “Find 30 minutes sometime in the day.”

Graves and McCuen are lucky when it comes to access. Since they have the keys to their gyms, they have the place at their disposal. McCuen can even use her tanning beds if she wants.

Graves said in the very beginning of the lockdown, “I was mourning my business closing,” but she quickly got herself into the right headspace to transition to online sessions. Some of her loyal clients have kept their monthly memberships active so they can keep having unlimited classes.

Other than the obvious, there are some limitations to the remote setting.

Graves was able to rent out Ride’s high-tech bikes for people to use in their homes, which also helps her offset some expenses.

The only piece of equipment that McCuen’s Curves on Demand clients need is a resistance band that comes with their membership. A 30-minute video workout with one of those will work every major muscle group.

McCuen said the band can replicate at home everything a client can do on the machines at the gym. She advises her clients not to settle for a daily walk; they should be doing resistance exercises, and do them regularly.

Labow’s gym is more difficult to re-create in your living room — alas, most people don’t have trampolines built into their floors, climbing holds on the walls and monkey bars and rings hanging from the ceiling. But you might have a tennis ball kicking around to work on grip strength training; if not, a rolled-up sock will do.

“Even if everyone just had a pull-up bar,” things could be more diversified, Labow said.

You can work out doing yard work, putting in your garden beds or turning your compost pile.

“I saw a dude who did a full marathon on his patio,” Labow said. No joke — the man’s name is James Campbell, an Englishman who completed a full 26.2 miles running around his 20-foot backyard while on lockdown last month.

There is the social aspect of going to the gym that is tough to replicate at home — although McCuen adds, “Yes, it is fun, yes, it is social, but we’re here for a workout.”

Graves said Ride’s classes can get pretty packed. At one live session last month, there were 37 Zoom screens going at once.

They are a little less chit-chatty in a remote setting, but Graves said people converse before and after over the teleconference for a few minutes. And one Rider holds up signs that act as dialogue balloons of things she might normally say out loud during classes.

Normally, all the cycles are hooked to an in-house computer, and Graves has something of a virtual group heartbeat to aid in her instruction. Now, she just teaches to the music.

“I don’t think people care as much. They just want to ride and sweat, get that incredible sweat,” she said.

There are plenty of people who can’t make the scheduled group ride sessions, so there are recordings for people to follow. But if they can, Graves prefers members to pedal along live.

“It’s not just ‘hey, watch my video whenever you can,’ so there’s a little bit of accountability,” Graves said.

All three gym owners say the best thing you can do to yourself while stuck at home is to find that half-hour, 45 minutes and forget about the world.

Vermont took a big step toward reopening its economy this week, with stores allowed to open their doors to customers — with strict safety prec…